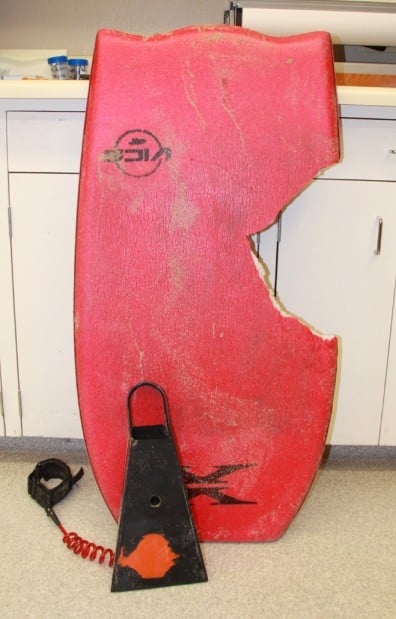 Photo courtesy of Santa Barbara County Sheriff's Department This board, used by shark attack victim Lucas Ransom, shows a bite mark left by the shark that killed him. 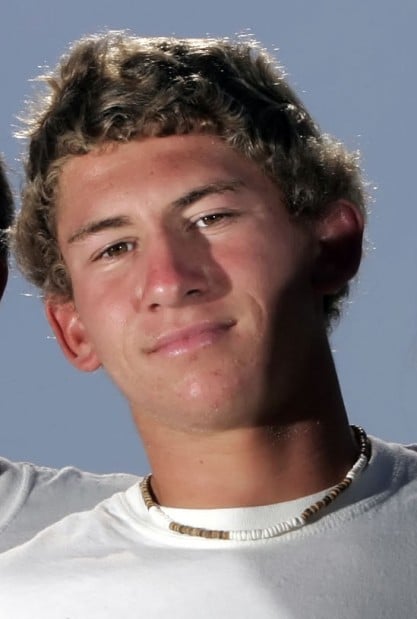 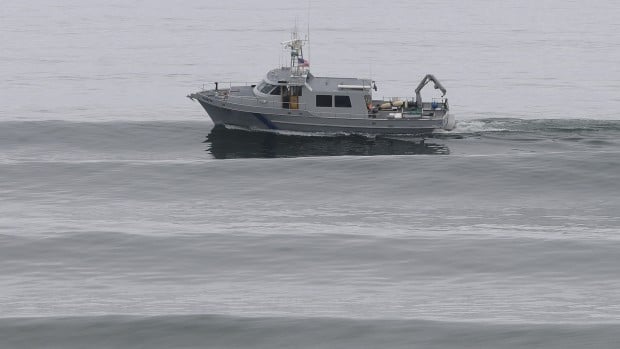 Buy Now
Len Wood/Staff Bluefin, a ship belonging to the State Department of Fish & Game, patrols the waters off Surf Beach west of Lompoc today near where a shark attacked and killed a 20-year-old man. Vandenberg Air Force Base officials closed Surf Beach at 9:46 a.m., shortly after the shark attack, an air base spokesman said. 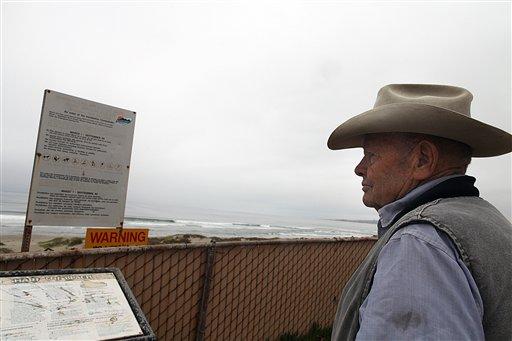 Longtime Lompoc resident Richard Grossini looks out over Surf Beach near the scene of a fatal shark attack today. The sign in the background warns there is no lifeguard ion duty. (AP Photo/Spencer Weiner) 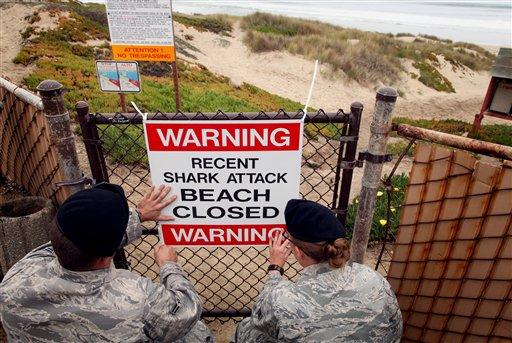 A 19-year-old UCSB student was killed today when he was attacked by a large shark while boogie boarding on the break line about 100 yards off Surf Beach at Vandenberg Air Force Base.

The victim, who has been identified as Lucas McKaine Ransom, of Romoland, a city near Perris Valley in Riverside County, was in the water with a friend between 9 and 9:30 a.m. when a shark bit and severed his leg, according to Santa Barbara County Sheriff Bill Brown.

The friend, Matthew Garcia, told The Associated Press that he was two feet from Ransom, who was wearing a wet suit, when the shark rose out of the water without warning and bit into Ransom's leg.

Garcia says his friend cried 'Help me, dude!' before he disappeared under the water in a cloud of red.

Garcia was pounded by waves as he looked for Ransom. He estimates the shark was 18 feet long.

He finally spotted his red body board, which was attached to Ransom by a cord, and swam to him.

Garcia says he did CPR as he pulled Ransom from the water but that Ransom was limp. Federal and State Fish and Game officials are working to identify the type of shark, which has been described as being 14 to 20 feet in length and left a bite mark a foot wide on Ransom's boogie board.

Garcia, who was surfing on a regular surf board, said the ocean was calm and beautiful before the attack, with 8- to 10-foot wave sets that the friends had been tracking all week as they moved down the West Coast from Alaska.

"There was no sign, there was nothing. It was all very fast, very stealth," said Garcia, 20.

The pair, best friends since high school, had joked the night before about the chances they would be attacked by a shark, Garcia said. It was the first time either had been to Surf Beach, and they planned to surf until about 11 a.m. and then go to class, he said.

Ransom's mother, Candace Ransom, said her son had been home last weekend, but spent most of the time studying for midterm exams.

She last spoke to him this morning, when he told her he was going to surf sets of 8- to 10-foot waves at a beach that was new to him. His mother encouraged him not to go in the water, she told the AP.

"I said, 'Honey, if they're so pretty why don't you just sit and watch them. You're at a place you've never been to before,"' Candace Ransom said. "He said, Mom, don't worry, I'll be fine and I'll call you when I finish up."

The attack prompted Air Force officials to immediately close all of Vandenberg's beaches for at least three days.

"Right now, that's a safety precaution," said Vandenberg spokesman Jeremy Eggers. "We'll re-evaluate that closure as time goes on, but right now the base beaches are closed for 72 hours."

By afternoon, Air Force officials said signs had been posted advising of the closure, and that crews would monitor the area by walking along the shoreline and riding all-terrain vehicles. Santa Barbara County crews also will conduct helicopter patrols.

Shortly after 1 p.m., people showed up at Surf Beach unaware of the tragedy. Others were on hand to greet passgengers arriving on the Amtrak train that stops at Surf's unmanned station.

Lompoc resident Joe Hecker brought his daughters, clad in bathing suits, to the beach to collect shells in the sand, only to learn of the attack-related closure.

"It's unfortunate. It's scary. It could be anybody's kid," he said.

Typically, he added, the warnings about Surf Beach hazards center on the dangerous undertow rather than sharks.

As he talked, two Coast Guard vessels performed patrols parallel to the coastline more than four hours after the attack.

Surf Beach, which is west of Lompoc on Vandenberg Air Force Base property, is the closest publicly accessible beach for Lompoc Valley residents. It is also easily accessed from a nearby Amtrak station that serves the area.

In September 2008, a shark bit a surfer's board at Surf Beach and base officials issued a 48-hour warning to beach users.

Base officials said at the time that they believed it was the first shark incident off Vandenberg and sought recommendations from other coastal parks about their policies for beach closures.

In 12 years he recalled two reports of shark sightings at Jalama, while Surf Beach is known as a shark area, he said.

Based on a memorandum of understanding with VAFB, the Santa Barbara Sheriff's Coroner's Bureau will conduct the death investigation due to the incident occurring off the beach and in the water. The Santa Barbara County Parks Department is posting warning signs at county beaches in the Jalama and Guadalupe beach areas. Please call VAFB Public Affairs at (805) 606-3595 for any questions regarding beach closures on the base.

The Associated Press contributed to this report.

Sunday protests in support of George Floyd in Santa Maria

A former student accused Santa Maria High School officials of civil rights violations and trying to cover up a racially-charged April 2019 bullying incident in which he was allegedly assaulted by fellow teammates on a bus enroute to a varsity baseball game in April 2019.

A city-wide curfew of 9 p.m. was imposed this afternoon by Santa Maria Mayor Alice Patino following Sunday night's civil unrest downtown that led to looting of the Town Center Mall and other acts of vandalism

Several Santa Maria residents and veterans responded to the chaotic scene in downtown Santa Maria to replace an American flag that was removed from its pole on the front lawn of City Hall during a demonstration that turned violent on Sunday.

San Luis Obispo County Sheriff's officials have released the name of a Nipomo woman found dead Wednesday in a residence on Tefft Street.

Four juveniles arrested on suspicion of burglarizing vehicles in Orcutt

Four juvenile suspects were arrested Thursday on suspicion of felony and misdemeanor theft charges after they were spotted allegedly burglarizing vehicles in an Orcutt neighborhood.

Photo courtesy of Santa Barbara County Sheriff's Department This board, used by shark attack victim Lucas Ransom, shows a bite mark left by the shark that killed him.

Buy Now
Len Wood/Staff Bluefin, a ship belonging to the State Department of Fish & Game, patrols the waters off Surf Beach west of Lompoc today near where a shark attacked and killed a 20-year-old man. Vandenberg Air Force Base officials closed Surf Beach at 9:46 a.m., shortly after the shark attack, an air base spokesman said.

Longtime Lompoc resident Richard Grossini looks out over Surf Beach near the scene of a fatal shark attack today. The sign in the background warns there is no lifeguard ion duty. (AP Photo/Spencer Weiner)