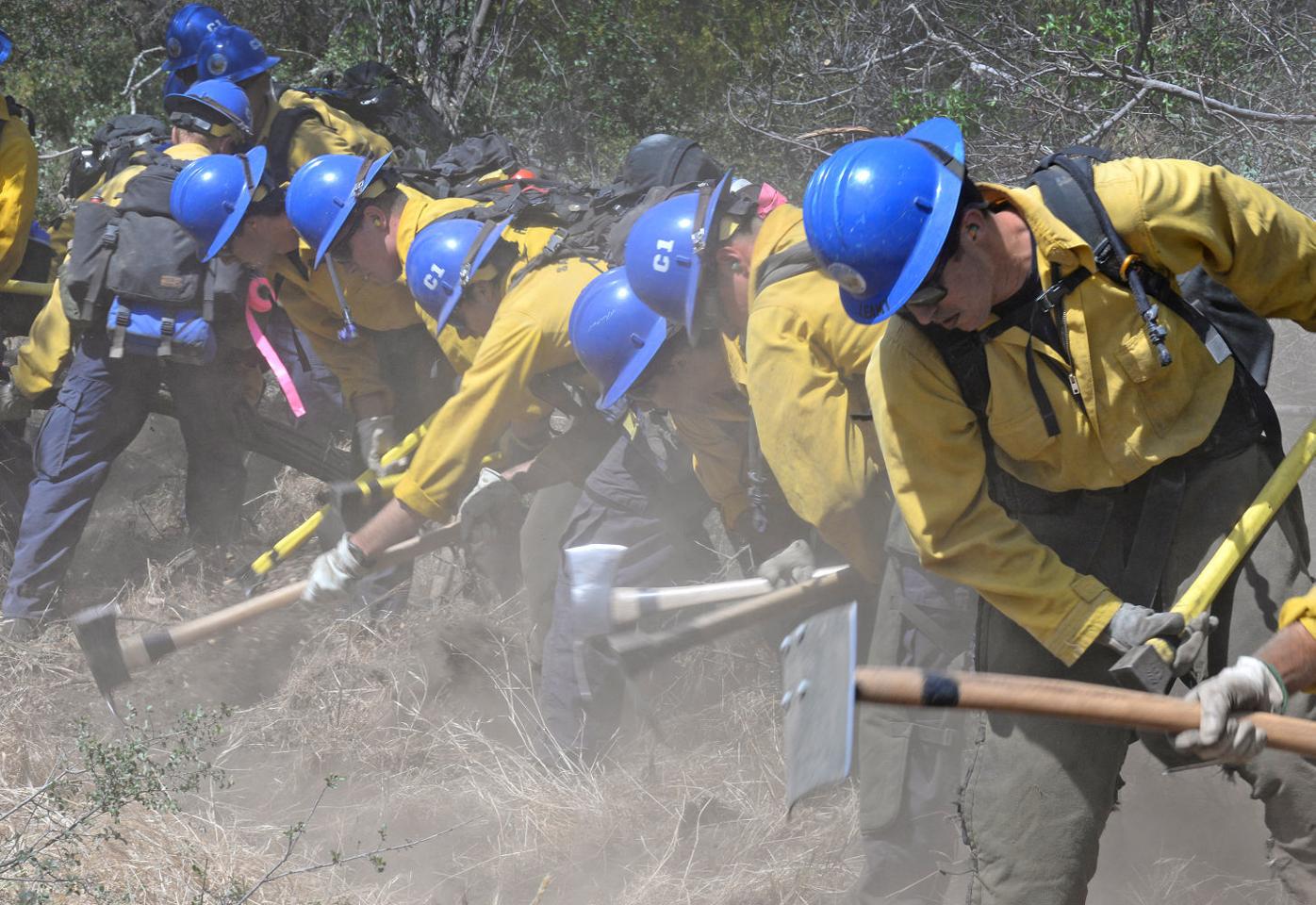 Santa Barbara County Fire Department's wildland firefighters Crew 1-1 and Crew 1-2 work to clear a fire line while training near their camp at Cachuma Lake. The firefighters work together to build a corridor cleared of vegetation down to the mineral soil as a fuel break and to help contain a vegetation fire. 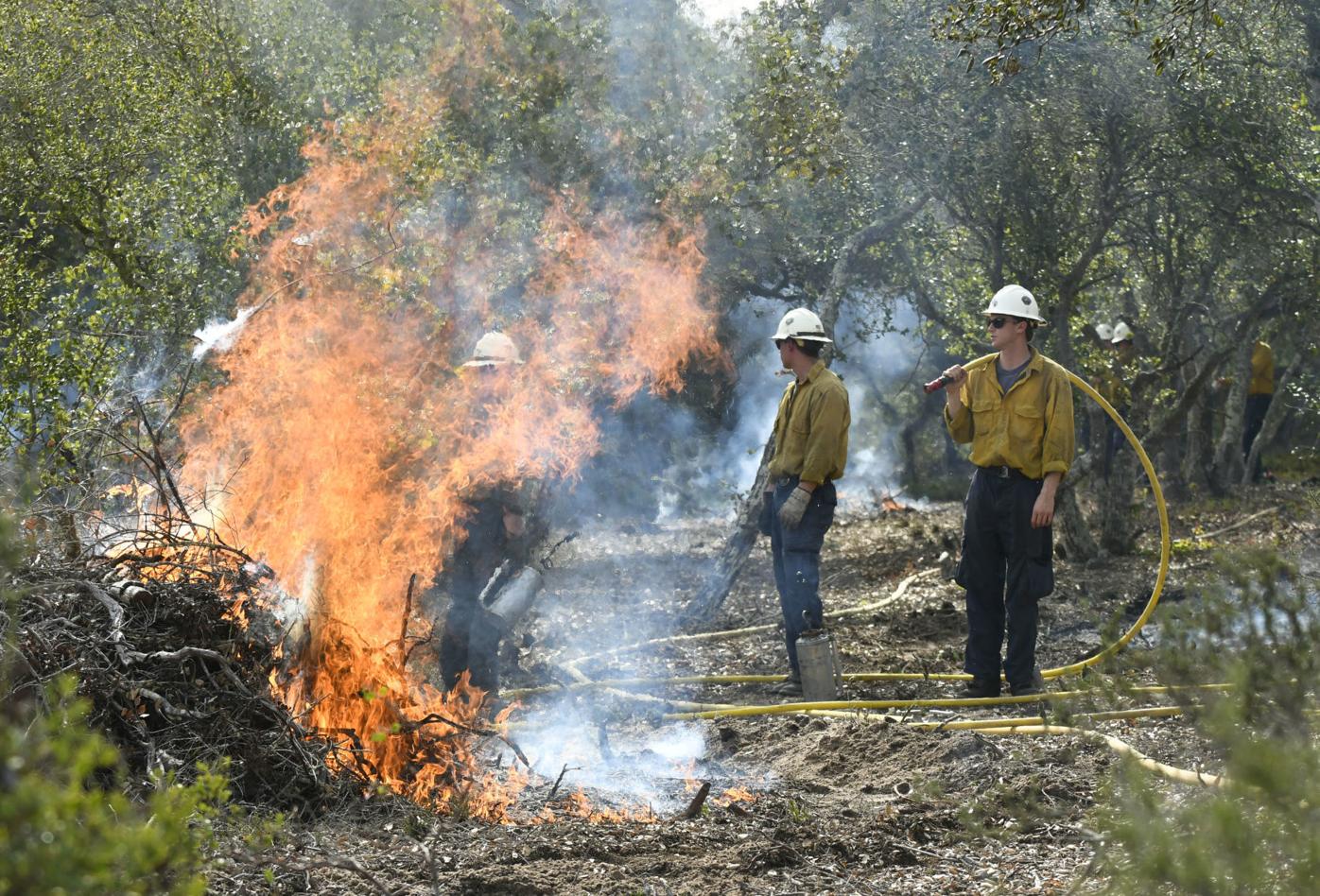 Firefighters from the Santa Barbara County Fire Department burn piles of tree branches and brush on Burton Mesa to create defensible space from wildfires around the rural community in this file photo from February. The county has obtained a grant to conduct a four-year fuel reduction project in the Lompoc Valley and surrounding hills. 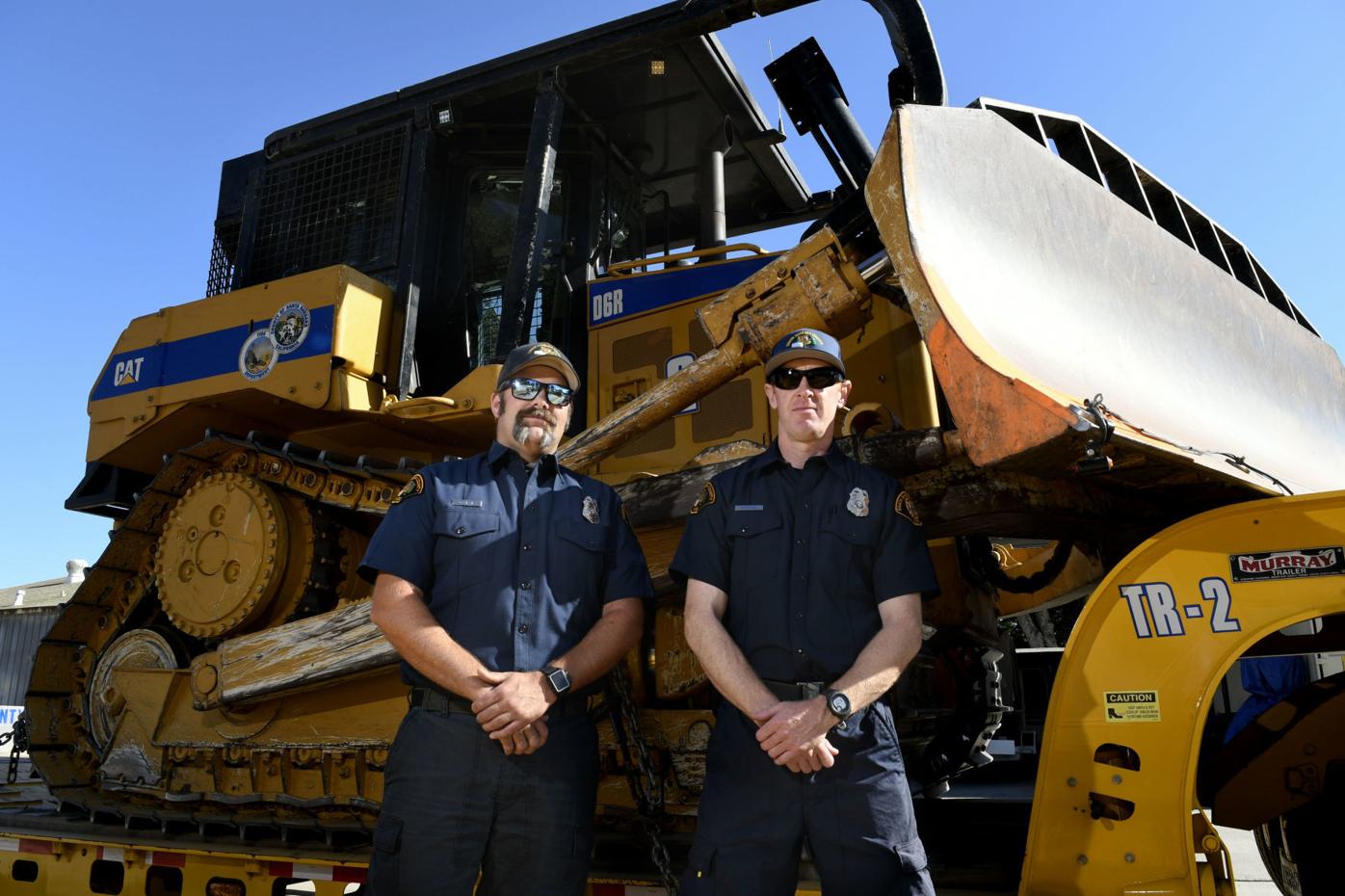 The Santa Barbara County Fire Department increased staffing in early September because of forecasts of high fire danger. Bulldozer operator Joseph Gavlak and assistant operator Ryan Rosdail had their hours increased at Station 24 in Los Alamos as a result. 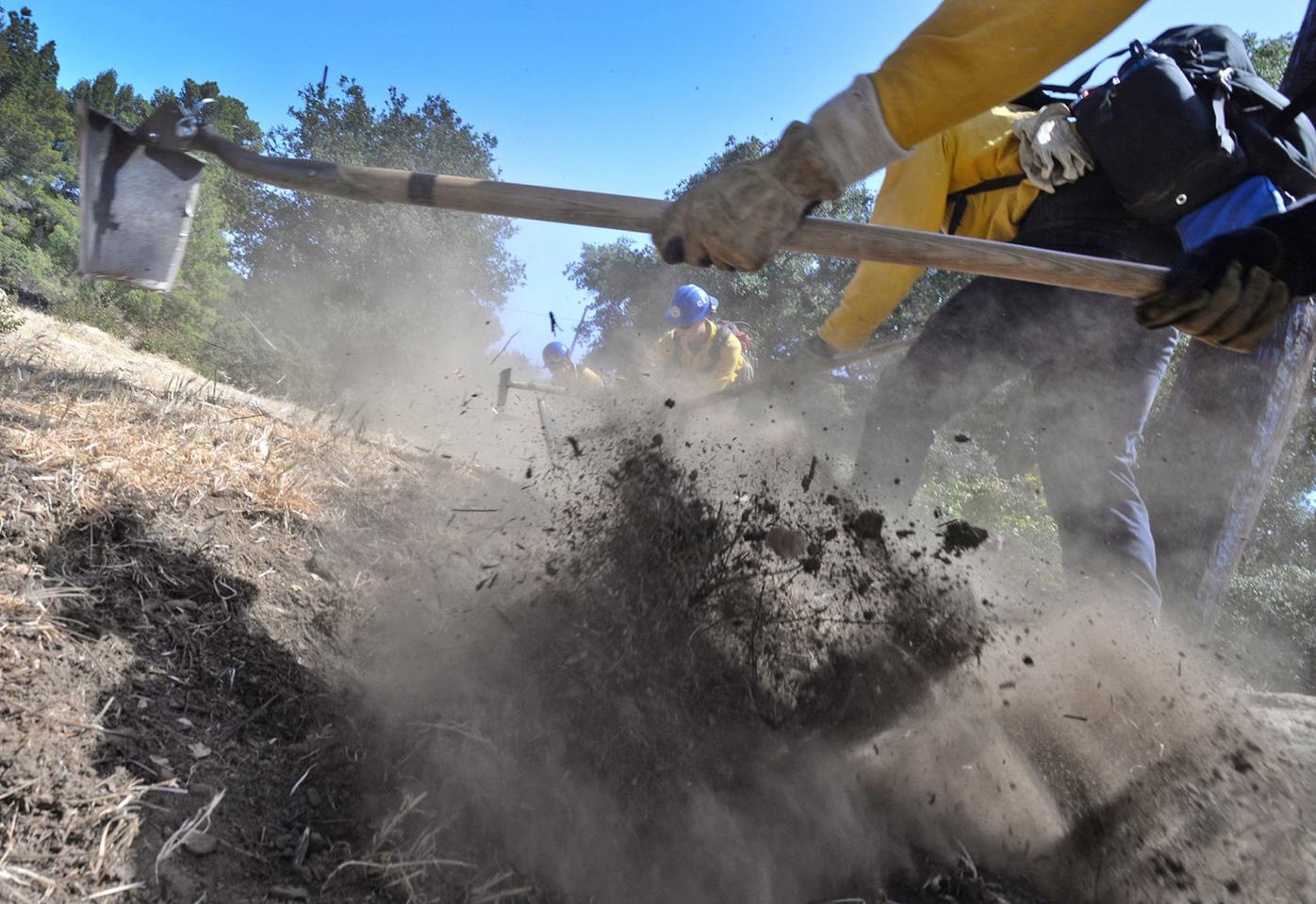 Santa Barbara County Fire Department's wildland firefighters Crew 1-1 and Crew 1-2 use hoes McCleods and other tools to clear a line of vegetation while training near their camp at Cachuma Lake. 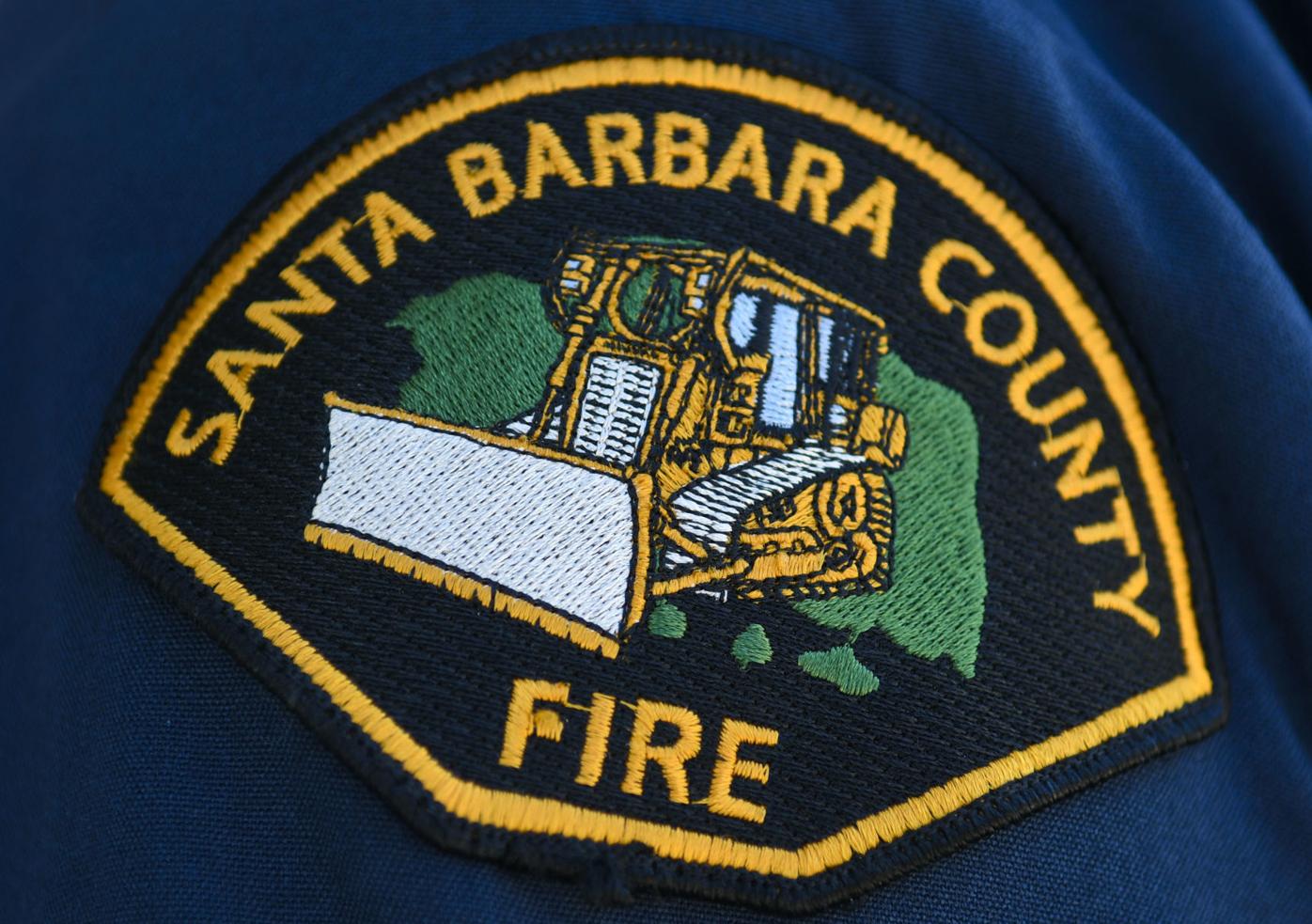 Santa Barbara County Fire Department's wildland firefighters Crew 1-1 and Crew 1-2 work to clear a fire line while training near their camp at Cachuma Lake. The firefighters work together to build a corridor cleared of vegetation down to the mineral soil as a fuel break and to help contain a vegetation fire.

Firefighters from the Santa Barbara County Fire Department burn piles of tree branches and brush on Burton Mesa to create defensible space from wildfires around the rural community in this file photo from February. The county has obtained a grant to conduct a four-year fuel reduction project in the Lompoc Valley and surrounding hills.

When a structure fire broke out July 6, 2018, on North Fairview Avenue in the hills at the edge of Goleta, the flames, later dubbed the Holiday fire, spread explosively through the neighborhood.

Driven by hot Santa Lucia winds rushing down the Santa Ynez Mountains, the fire began gobbling up other homes as panicked residents fled and traffic on the narrow residential roads became chaotic.

When it was finally fully contained five days later, however, the fire had been held to just 113 acres.

Only 10 homes and 14 outbuildings were destroyed, while three homes sustained damage.

Given the fast downslope winds, low humidity and high temperatures that night plus the relatively dense clusters of homes, it could have been much worse.

But anticipating the weather conditions, Santa Barbara County Fire Department had staged additional resources not far away on Cathedral Oaks Road, and at the first alarm, they began pouring into the neighborhood.

Prestaging engines and crews in or near high-risk areas is a short-term tactic based on weather forecasts and other factors — like an influx of visitors for a Fourth of July holiday.

But agencies also prepare for potential wildfires on a seasonal basis.

Like the U.S. Forest Service, the County Fire Department also increases staffing and the number of engines, bulldozers and other resources it has available as that annual heating and drying cycle begins.

Using a long-term tactic, both the Forest Service and County Fire prepare for wildfires by modifying fuel conditions to keep flames from spreading out of control.

“There are three elements to wildfire — fuel, topography and weather,” Santa Barbara County Fire Marshal Rob Hazard explained. “We can’t control the weather. We can’t change the topography. But we can modify the fuels.

A little help from our friends

Both Los Padres National Forest and Santa Barbara County Fire Department rely on mutual aid, as does virtually every other fire protection service in the nation, to help fight major wildfires.

Usually, official mutual aid agreements are signed between regional agencies, but it doesn’t matter if no agreement exists when disaster strikes.

When one agency needs assistance, other agencies respond almost without question, sending whatever resources they can spare to help deal with whatever disaster has erupted, because they know someday they may be the ones asking for help.

“We send assets where they’re needed as requested,” said Jim Harris, forest fire chief for Los Padres National Forest. “We may send a hotshot crew to Alaska, an engine to Texas, a helicopter to Inyo [National Forest].”

When the Cave fire erupted around 4:15 p.m. Nov. 25 near Highway 154 and Painted Cave Road, calls went out for assistance as the wind-driven blaze exploded to nearly 3,000 acres by midnight.

By the next day, at least 600 firefighters plus engines from departments in San Luis Obispo, Ventura, Los Angeles, Orange and Kern counties were on the fire lines alongside crews from County Fire and the U.S Forest Service.

“It’s all about reducing the intensity of the fire,” he added.

Modifying the fuels means clearing out brush and excessive undergrowth, thinning chaparral and removing such forest debris as fallen trees and limbs.

While goats have been used by cities and special districts for mowing down weeds in relatively small, focused areas, fire officials say they haven’t proven effective, efficient or economical for the large-scale projects required for wildfire management.

Prescribed or controlled burns are one of the easiest ways of getting rid of wildfire fuels.

A similar system has been employed by County Fire, but the agency also burns off light fuels like grasses, particularly on private grazing land in cooperation with ranchers.

County Fire has wanted to do more prescribed burning but until 2016 was hampered by regulations requiring extensive and expensive environmental assessments as well as a lack of funding.

However, areas of the North County also were high on County Fire’s priority list.

“Burton Mesa has been on our radar for 30 years,” Hazard noted.

So the county applied for and this year received a $2.23 million grant — which is boosted by $222,000 in matching county funds — that will be used to create fuel breaks around Burton Mesa communities and along ridgelines separating the Los Alamos and Lompoc Valleys.

The county also plans to increase the number of prescribed burns countywide, with a goal of burning 1,000 to 2,000 acres a year, he said.

More in Series: Wildfire County - Planning for the next big blaze (15 of 23)