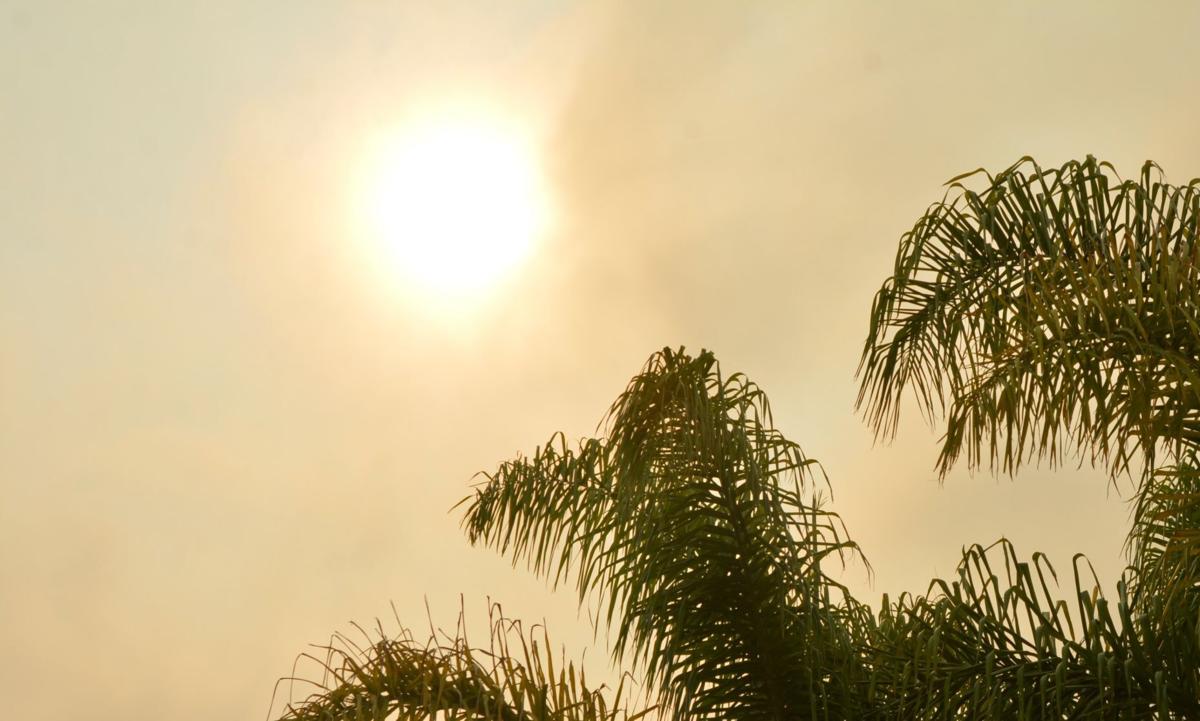 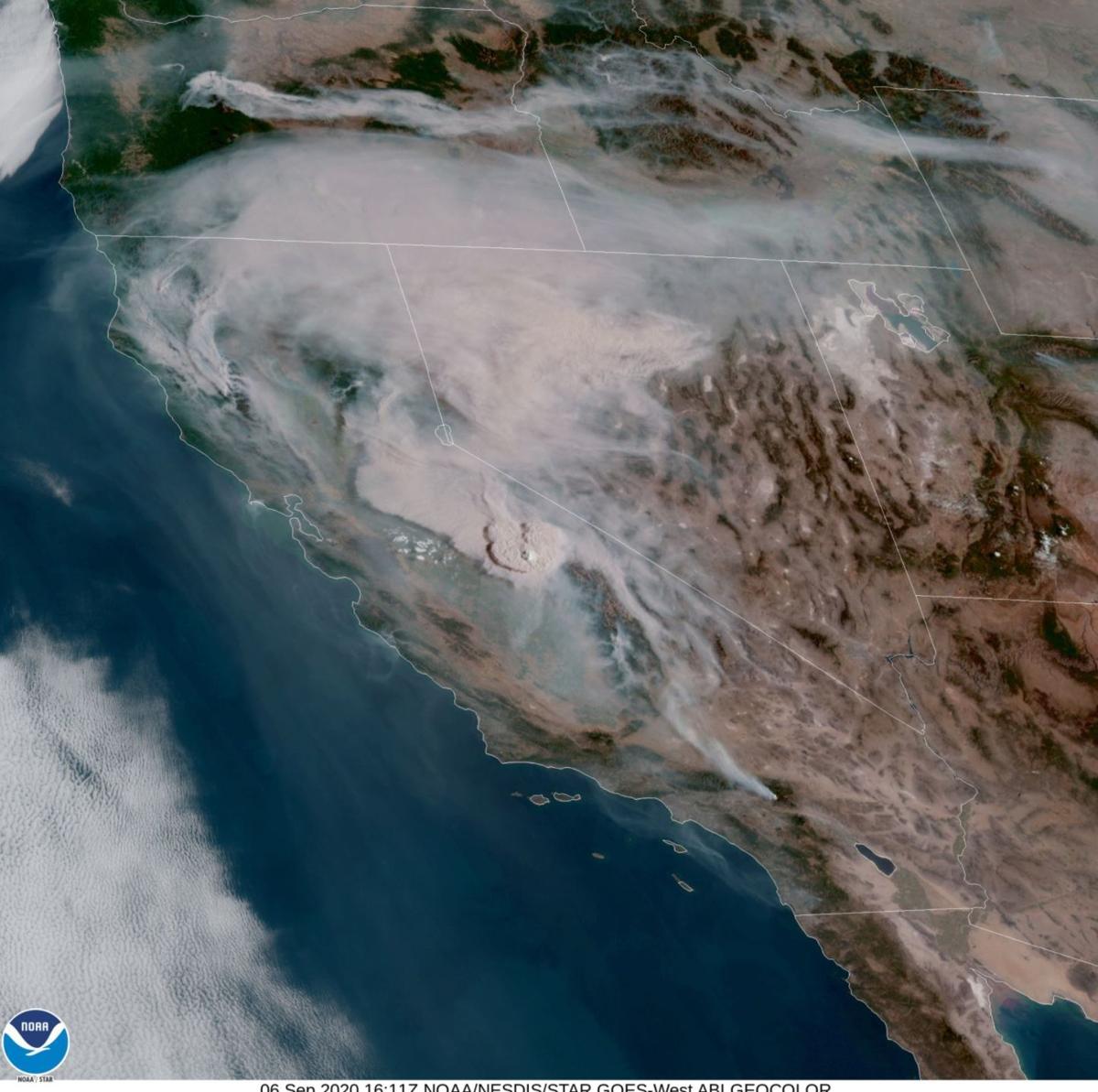 A NOAA satellite image shows smoke from California's 25 wildfires spreading across Oregon and Nevada as well as the rest of the state.

After baking in record-setting heat over Labor Day weekend, northern Santa Barbara County residents awoke Tuesday to a dusting of ash particles that rained from the sky overnight from fires raging to the north.

Smoke from those fires made daytime skies appear overcast and turned the sun into a glowing orange ball at sunset in Santa Barbara County.

But the Central Coast has been spared the “unhealthy” conditions reported in the Central Valley and the “very unhealthy” air in the Los Angeles Basin.

Officials with the Santa Barbara County Air Pollution Control District listed the PM2.5 air quality Tuesday morning in Santa Maria and Lompoc as “moderate,” meaning unhealthy for sensitive individuals, but by 2 p.m. that was upgraded to “good,” although the air still appeared filled with smoke.

“We often get questions about that when the numbers don’t seemed to jibe with what people are seeing or experiencing,” said Jackie Ruiz, spokeswoman for the Santa Barbara County Public Health Department.

“What we tell people is, if you see or smell smoke, take action,” Ruiz said. “We definitely want people to be cautious and stay indoors, avoid strenuous exercise and create a ‘clean room’ if you can.”

“The ash size is so much larger, it kind of falls outside our monitors,” she said. “If people see the ash, they should take precautions.”

While air quality improved a bit Tuesday, she said residents shouldn’t expect conditions to change much in the short term.

“With all the smoke we have being generated by these fires all around the state, we expect air quality to be moderate for the next few days,” Arlin Genet said. “Hopefully we’ll get these fires out soon.”

Smoke and “significant amounts of ash” also were reported Tuesday by the San Luis Obispo County Air Pollution Control District, which advised people not to clean up the ash until conditions improve.

Because the ash is corrosive, Arlin Genet advised those who do decide to clean up ash to wear gloves, use a damp cloth to wipe it off or rinse it with a little water and definitely not use leaf blowers.

Windows and doors also should be kept closed to keep smoke from coming inside, APCD officials said, but that hasn’t been easy during the heat wave that broke records up and down the Central Coast.

On Sunday, the hottest day of the weekend, Santa Maria Public Airport reported a high of 103 degrees, breaking the old record for that date of 96 degrees set in 1995, said John Lindsey, Pacific Gas and Electric Co. meteorologist at Diablo Canyon Power Plant.

But the real hot spot was Solvang, where the temperature hit 122, Lindsey said. Santa Ynez Airport reported a high of 117, equaling that of San Luis Obispo and Paso Robles

The fires blanketing the state with smoke have also set a record.

County Fire Department spokesman Capt. Daniel Bertucelli said the 25 wildfires burning in the state, being battled by 14,000 firefighters, already have burned more than 2 million acres, eclipsing the record for most acres burned in a year in California set in 2018.

Air quality is reported on the APCD website at ourair.org.

Smoke and fire conditions are available on a new website launched last week by the Environmental Protection Agency at fire.airnow.gov.

In San Luis Obispo County, air quality is available on the APCD website at slocleanair.org.

PM2.5 is defined by the U.S. Environmental Protection Agency as particles 2.5 microns or smaller in size, usually associated with smoke. As a comparison, the average human hair is 70 microns thick.

PM2.5 particles are considered the most damaging to human health because they not only enter the lungs but also can be absorbed into the bloodstream.

Two more private schools in the Santa Maria Valley will bring elementary students back for in-person learning over the next week, after receiv…

Good jobs, affordable housing and more water for Santa Barbara County and its neighbors are still among the top priorities for 24th Congressio…

The Santa Barbara County Public Health Department confirmed an additional 44 COVID-19 cases on Wednesday, along with two deaths as a result of…

A NOAA satellite image shows smoke from California's 25 wildfires spreading across Oregon and Nevada as well as the rest of the state.