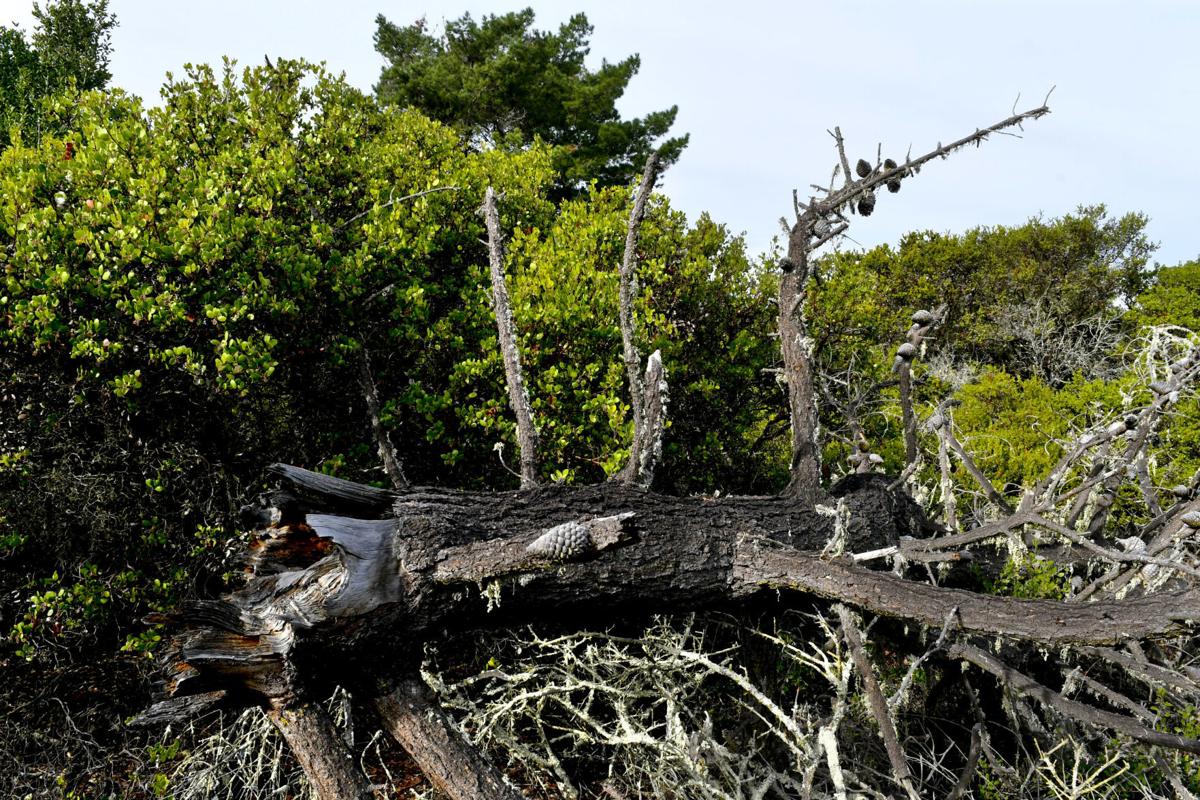 A fallen pine tree rests next to manzanita bushes in the Burton Mesa chaparral near Vandenberg Village. Experts say drought-stressed trees die and become an ideal fuel for wildfire. 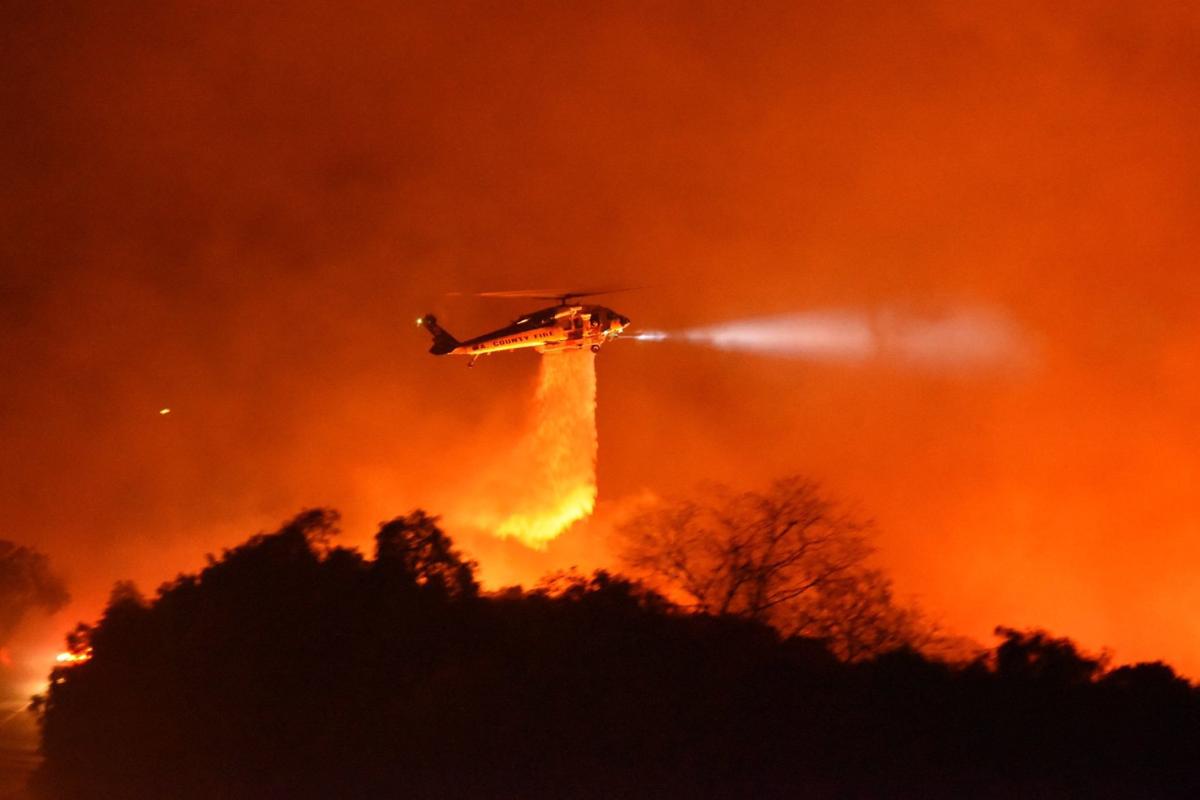 A Los Angeles County Firehawk helicopter makes a nighttime water drop on the Cave fire off Highway 154 north of Foothill Road on the night of Nov. 25. 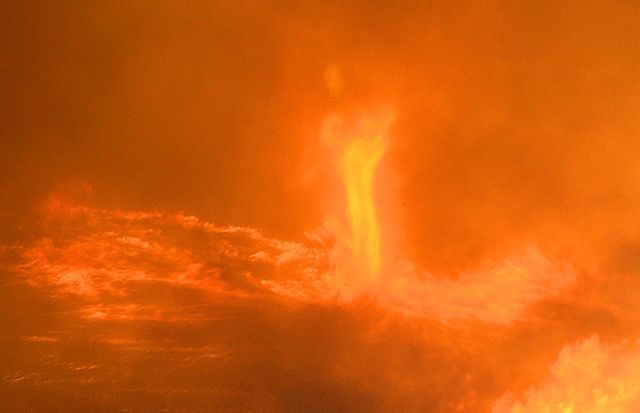 A fire whirl, the smaller version of a fire tornado, spins up during the Sherpa fire near El Capitan State Beach in June 2016.

Over the years Rob Hazard, 45, has seen almost every aspect of firefighting, from being in the trenches to behind the desk as an administrator.

He started his career in 1988 as a member of the Los Padres Hot Shots, then fought urban fires with the County Fire Department in 1990. He returned to fight wildland fires in 2005 with the creation of a new hand crew program.

He's now one of the few administrators who still goes out on fires.

While Hazard doesn't believe wildfires are becoming more unpredictable in their behavior, he does acknowledge conditions are changing, which is making wildfires more difficult to contain.

And that means wildfires are becoming bigger, lasting longer and doing more damage.

“We’re seeing phenomena we’ve never seen before,” he continued. “Like the fire tornadoes in the Northern California fires.

“I’ve seen fire whirls before, maybe a few feet high. But big, real fire tornadoes that pick up cars and push fire engines — I’ve never seen anything like that before.”

The forest fire chief for the Los Padres National Forest has also seen wildfires increasing in frequency and intensity, a trend that has accelerated in recent years.

Jim Harris, 44, started his career in 1992 on the 460,000-acre Cleveland National Forest in Southern California, where two of the state's biggest and most destructive wildfires have burned, both driven through chaparral and coastal sage scrub by gale-force Santa Ana Winds.

The most recent was the Cedar fire in San Diego County, which burned 273,296 acres at a rate of 3,600 acres per hour in 2003 — the same year Harris transferred to the Los Padres.

“During the drought [people were] considerably surprised by the intensity and rate of spread,” Harris said. “As the dry fuels increased from the drought, the fire behavior became more intense. But it was not really more unpredictable.

“The duration of the drought was unprecedented,” he added. “None of us had seen anything like that in our careers.”

And while bureaucrats declared the drought — which started in December 2011 — was over in March 2019, that doesn’t mean it isn’t still having an impact on wildlands struggling to recover and likely have been changed indefinitely.

“The effects of the drought, I think, we’ll see for years to come,” Harris said.

Like Harris, Hazard also sees the deep impact of the drought.

“On the fuels side, there’s been a definite change in fuels with the long-term drought — there’s more dead fuels and less live fuels,” he said. “The drying curve has been progressively getting to the critical level earlier, even dipping below it.

“There’s more tree mortality because of the drought, which makes [trees] weak and susceptible to beetles.”

A drought-stressed tree attacked by bark beetles is soon a dead tree — and an ideal fuel for wildfire.

Like Harris and Hazard, other longtime firefighters also have seen the changes in conditions — lower humidity, higher temperatures and more wind.

“In the Thomas fire, there were 12 days of Santa Ana winds in Ventura County,” Hazard noted.

But the same changes taking place at night are really making wildfires much harder to contain, he said.

While techniques and strategies for fighting fires haven’t changed, the equipment has improved.

Leather helmets initially worn by firefighters gave way to helmets made of brass, nickel and aluminum. Those were later replaced by composite helmets of plastic and lightweight polymers that are stronger and resist heat better.

Fire engines, water tenders and chainsaws have all improved predictably as technology has advanced, but but other than materials, there has been little change in the tools wielded by hand crews.

Aerial assaults, however, have benefited greatly from advancements in accuracy, navigation, maneuverability, range and capacity.

Aerial firefighting began in 1955 with a 1939 Stearman biplane dropping 170 gallons of water on the Mendenhall fire in Mendocino County.

Today, the smallest single-engine fixed-wing aircraft and helicopters can drop up to 599 gallons, while the megatankers can unleash as much as 20,000 gallons at a time.

In previous years, daytime crews would try to cut line and do what they could as heat and wind pushed the flames forward and sapped firefighters' energy.

But at night, the fire would lay down, and aided by higher humidity, less wind and cooler temperatures, hand crews could cut far more fire lines than daytime crews could manage.

“In the past, we had the night,” Hazard explained. “What puts out fire is hand crews and that skinny little line they dig.”

Daytime crews would return the next day and stand amazed at how much line the night crews had established, even in the dark, Hazard said.

However, the fires are now being pushed forward almost as hard at night as during the day.

“What changed is those nights got a little warmer, a little drier, a little windier,” he said. “There’s been an incremental deterioration in nighttime conditions.”

As an example, he cited the Thomas and Whittier fires, where the humidity remained in the teens all night long.

"That’s just not the normal paradigm,” he said.

While the increased availability of night-flying helicopters has led to more nighttime water drops, Hazard said there are no notable new strategies for fighting fires in the face of changing conditions.

“It’s still the guys on the ground, the hand crews cutting the fire lines, that contain the fires,” he said.

Smokey Bear: The iconic symbol of wildfire prevention may not be who you think he is

For 75 years, Smokey Bear has been the U.S. Forest Service’s iconic representative for wildfire prevention, but he wasn’t named for a burned orphan bear cub as many people believe. In fact, the reverse is true.

A fallen pine tree rests next to manzanita bushes in the Burton Mesa chaparral near Vandenberg Village. Experts say drought-stressed trees die and become an ideal fuel for wildfire. 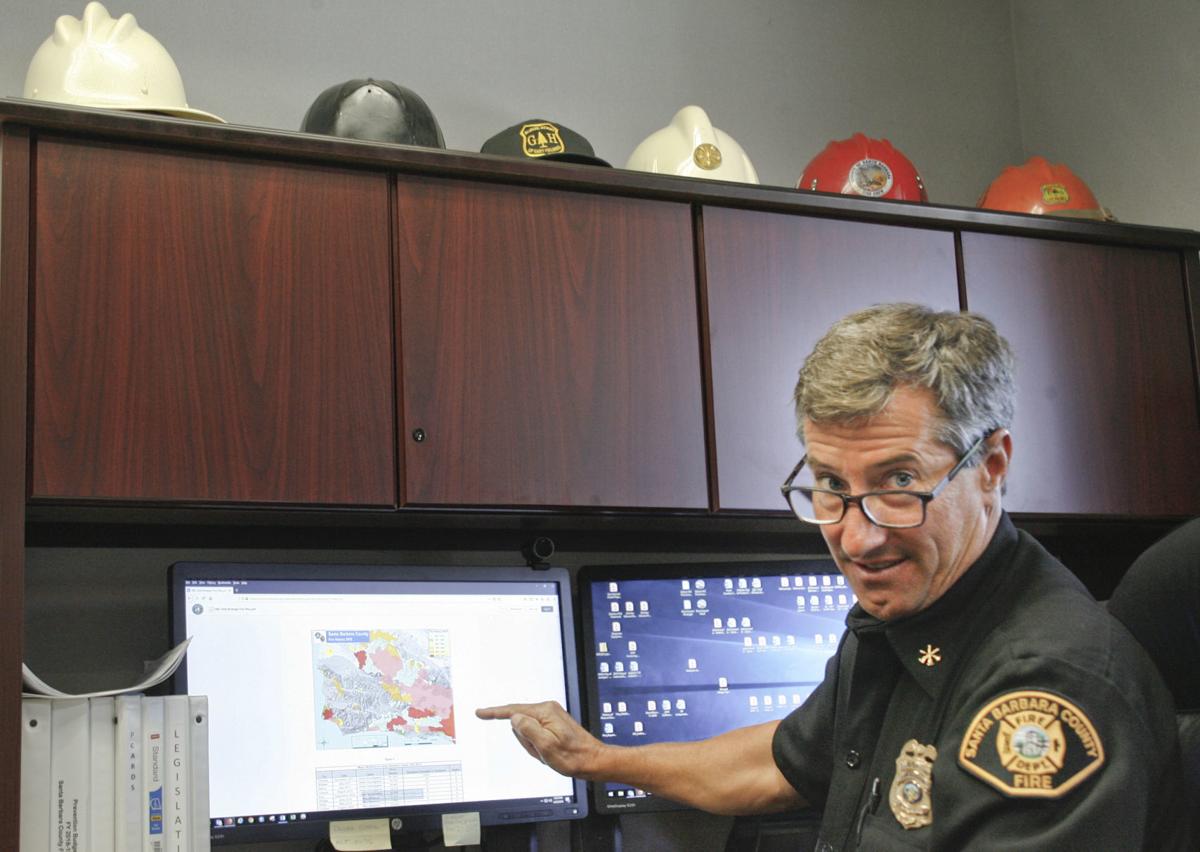 Rob Hazard, division chief and fire marshal for Santa Barbara County Fire Department, has a collection of some the fire helmets he has worn through his career with others left behind by his predecessor sitting above his desk.

A Los Angeles County Firehawk helicopter makes a nighttime water drop on the Cave fire off Highway 154 north of Foothill Road on the night of Nov. 25. 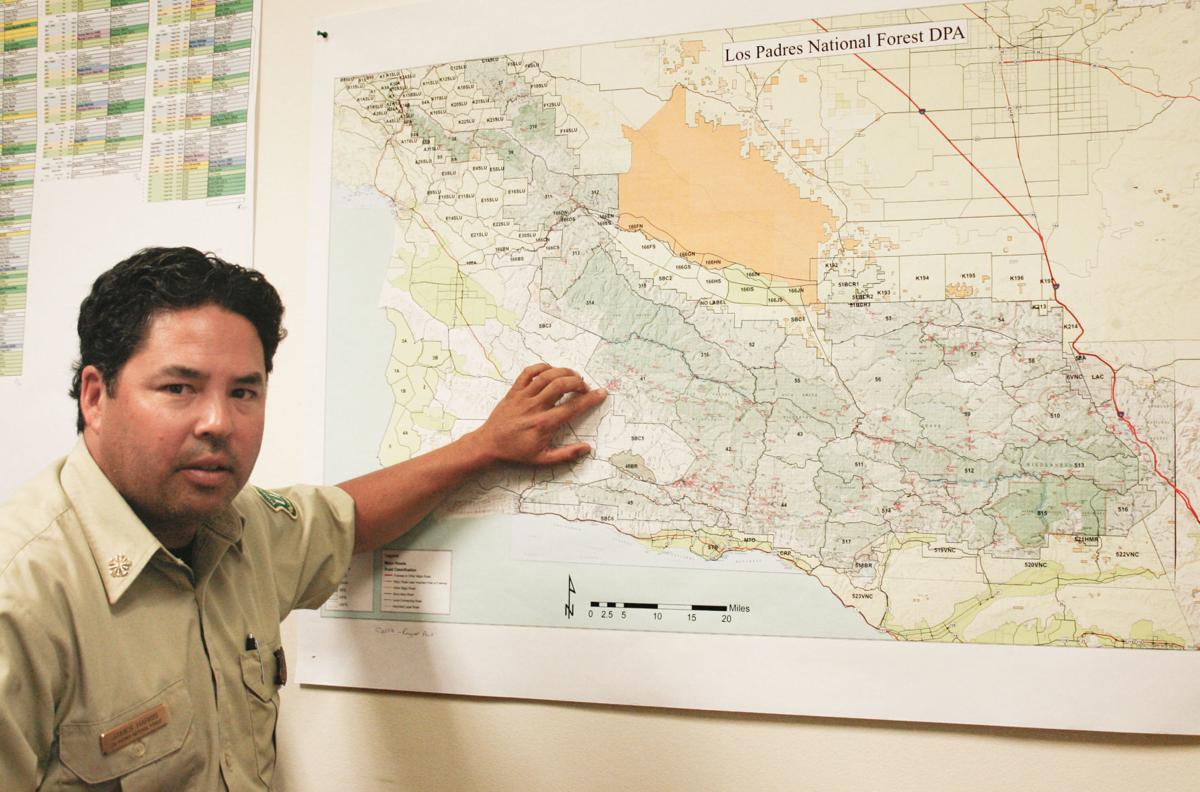 Los Padres National Forest Fire Chief Jim Harris points to an area of high wildfire risk on a map of the forest. He said 90% of wildfires are human-caused.

A fire whirl, the smaller version of a fire tornado, spins up during the Sherpa fire near El Capitan State Beach in June 2016.