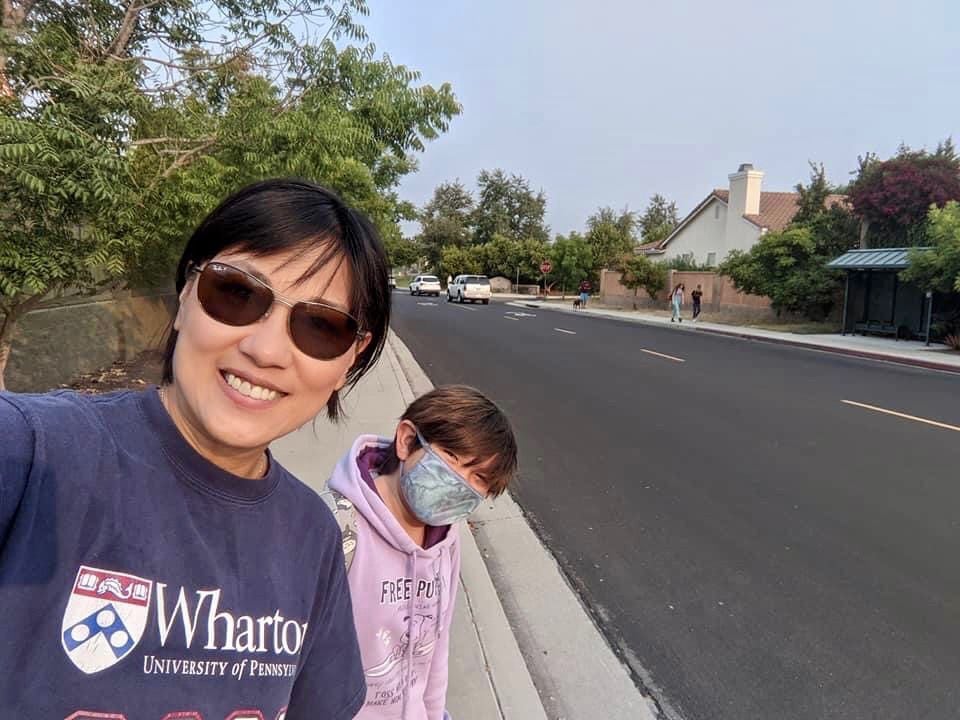 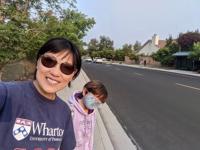 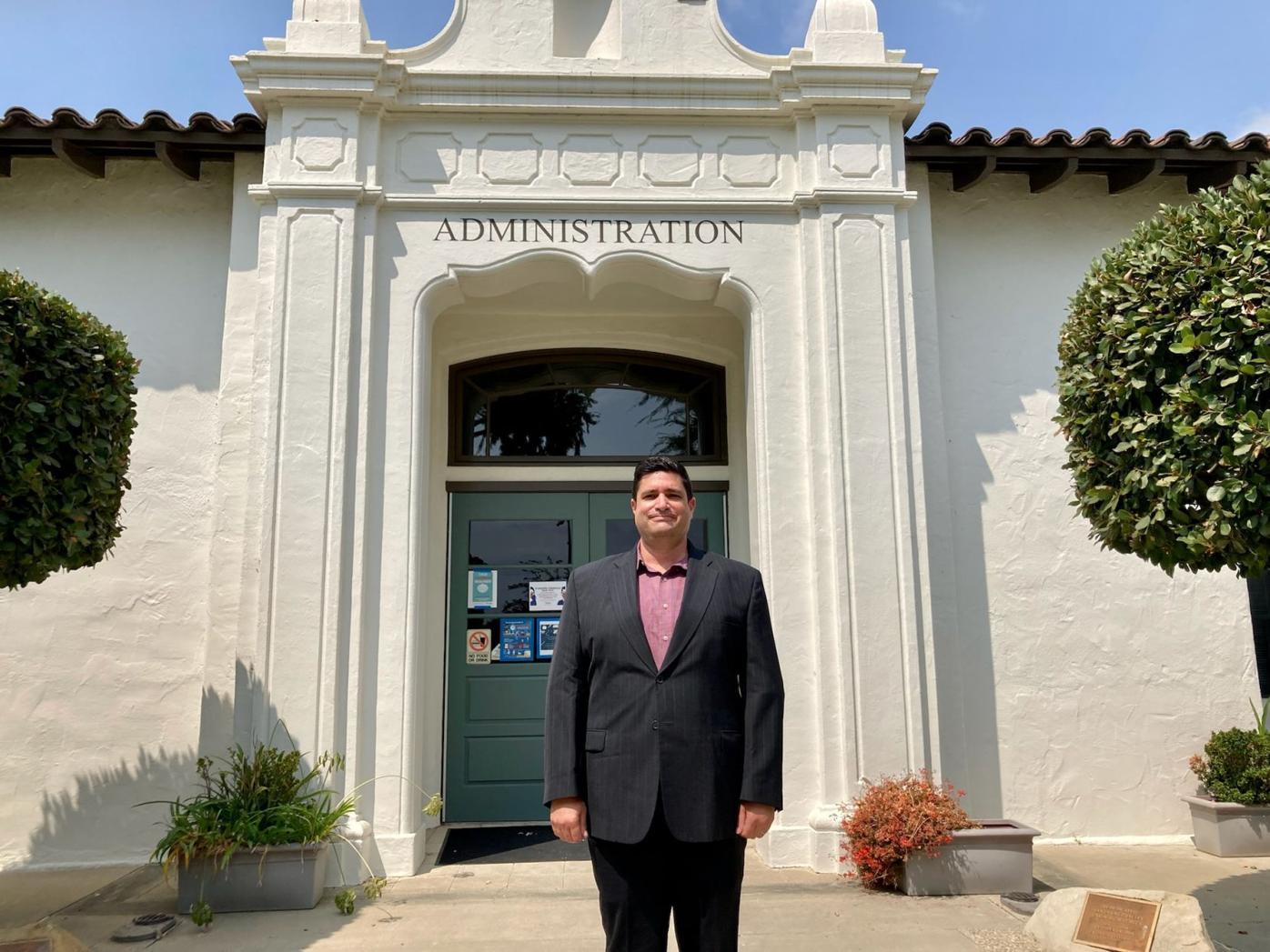 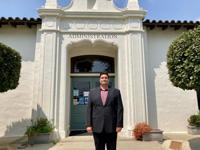 Andrew Schwab is starting the school year as the new superintendent of the Santa Ynez Valley Union High School District. 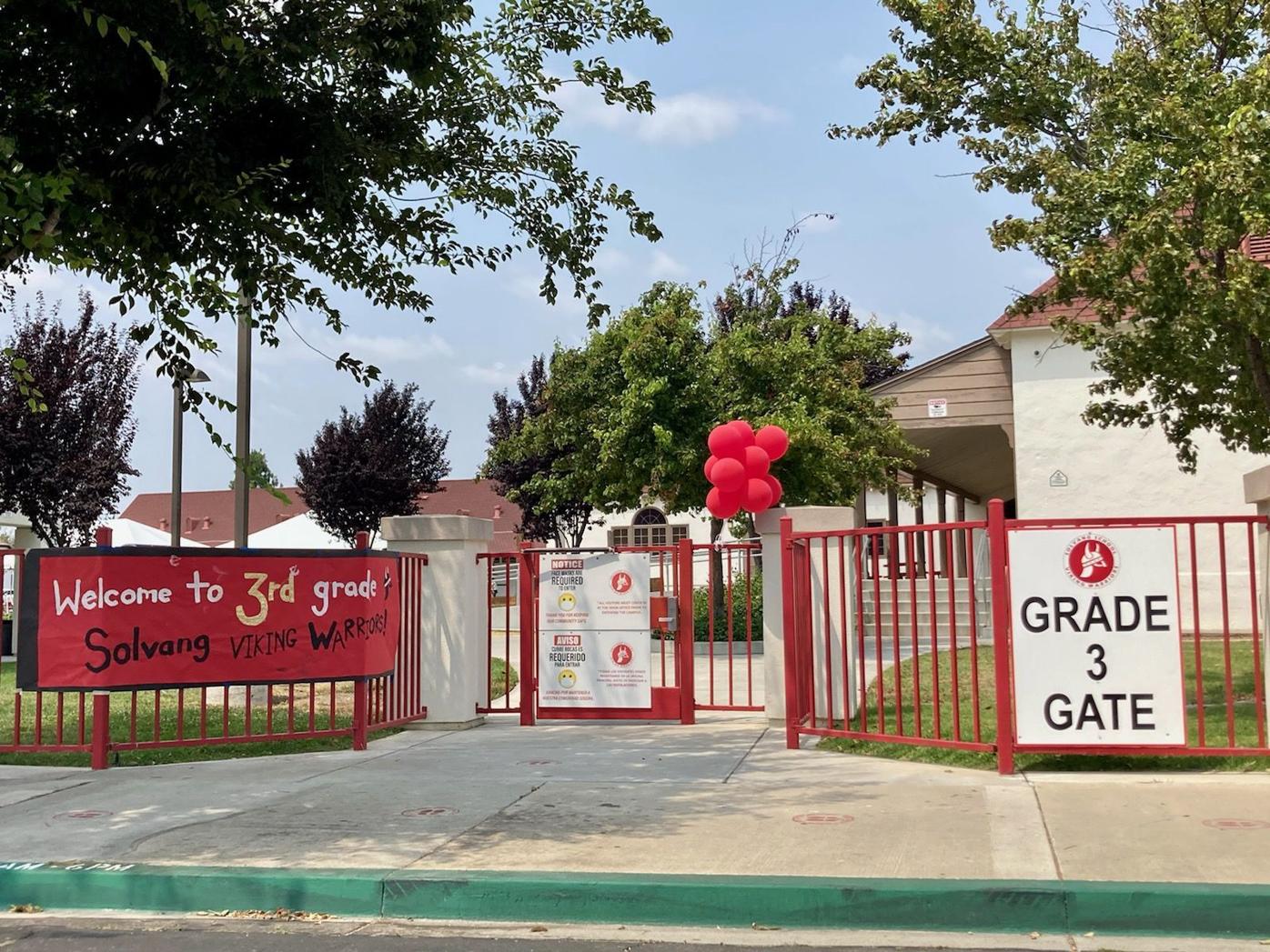 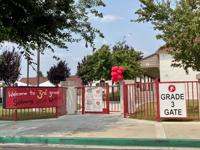 Solvang Elementary School students on Thursday were welcomed back to campus through separate entrances adorned with balloons and signage. 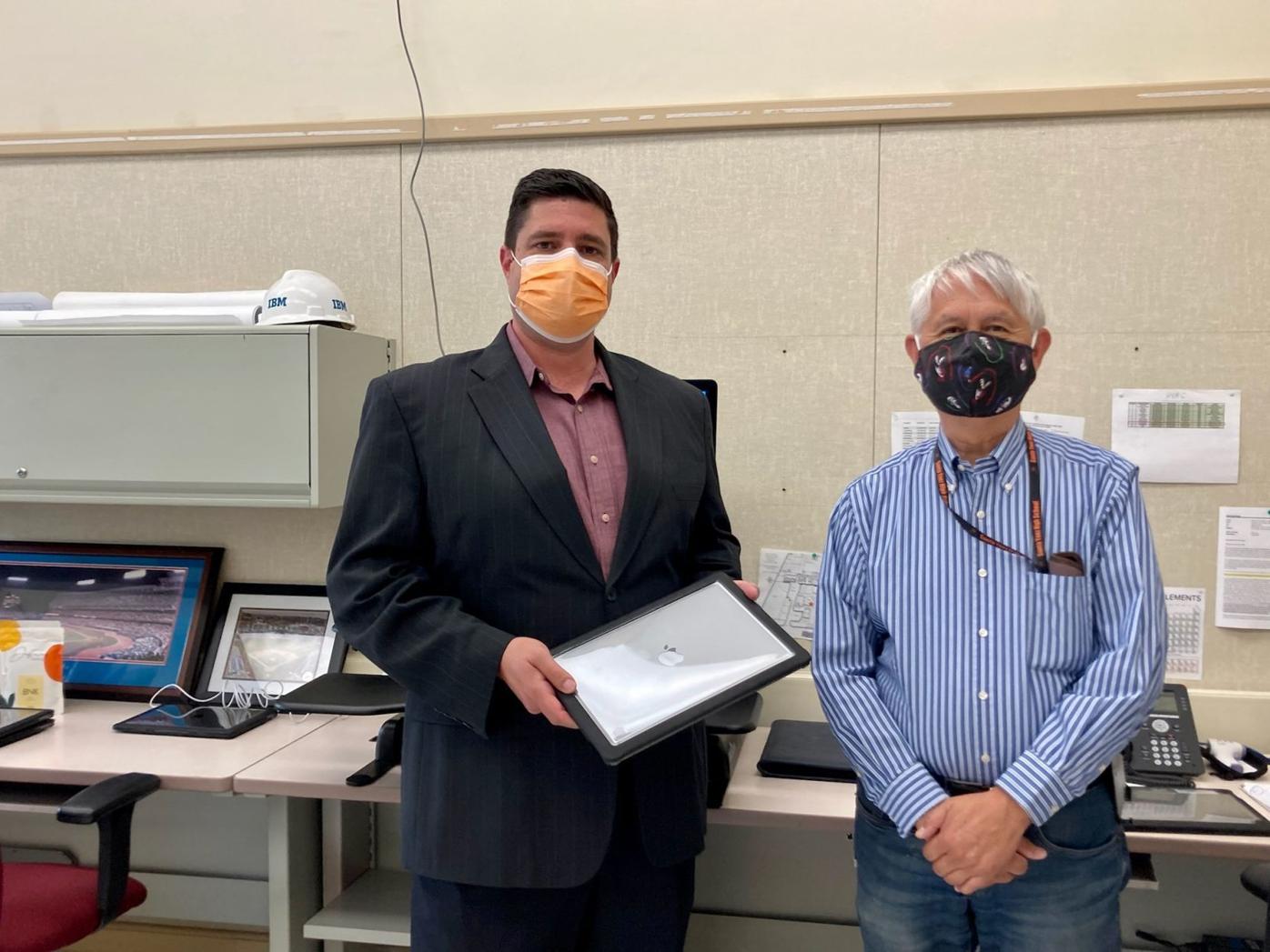 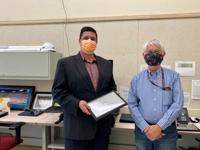 New Santa Ynez Valley Union High School District Superintendent Andrew Schwab, stands beside Edmund Hung, campus IT director/network manager, holding a MacBook Air, one of 863 devices that will be issued to each student as part of a new 1:1 technology initiative. 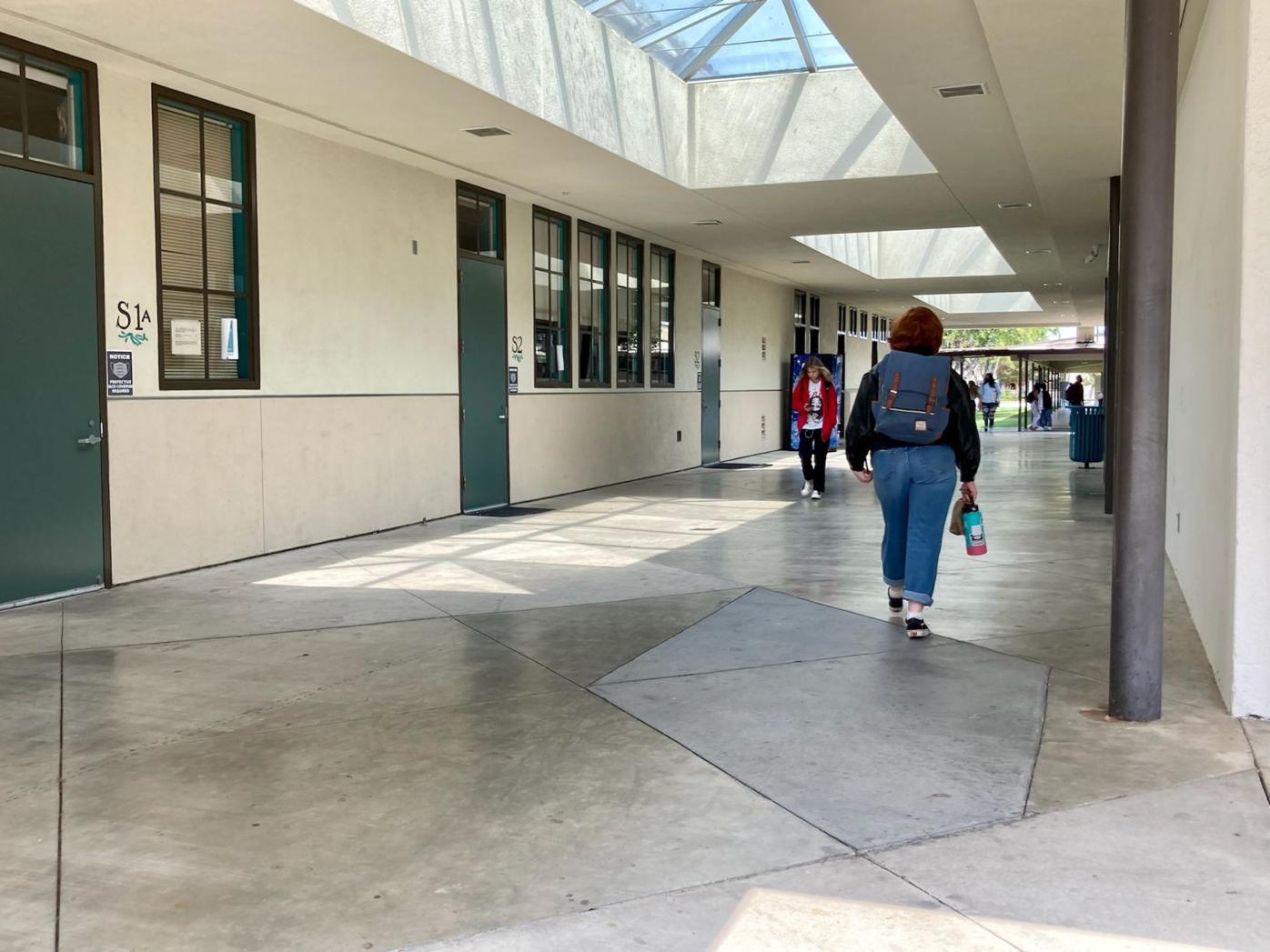 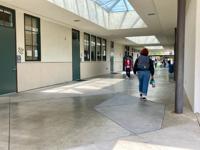 Andrew Schwab is starting the school year as the new superintendent of the Santa Ynez Valley Union High School District.

School campuses reopened across the Santa Ynez Valley last week as parents and school staff expressed cautious optimism at the kickoff of a third academic year marked by COVID-19.

Joe Castle, whose 10-year-old twins William and Juliette returned to Ballard Elementary on Aug. 19, said he is excited.

"I think Ballard is doing great despite the mask wearing," he added.

Some noticeable changes include the elimination of a hybrid learning option on campuses and the relaxing of social distancing measures for in-person instruction; however, masks still must be worn by students.

Under a health officer order that went into effect Aug. 6, Santa Barbara County residents 2 years and older, whether unvaccinated or vaccinated against COVID-19, are required to wear face coverings in all public indoor areas that include classrooms.

Castle said although he'd rather his children not have to wear masks all day at school, he understands the vigilance.

"I think they should take the masks off; we've got to proceed," he said, noting that his children have gotten used to wearing them. "I think it's good to be wise — and I'm glad we're in school and being mindful — but you can't let it control you."

"It's scary," Tseng said. "I've never been so concerned to send my kids to school, however, I do know that Oak Valley and Jonata take safety seriously."

Considering the alternative to returning, Tseng said her sons are happy to be back in class.

"I'm excited we're back in school, that school's open, and our kids and staff are here," Schwab said. "We're going to make sure school stays open — that's important."

Schwab, who spent part of his childhood in Oxnard and attended Humboldt State University, recently relocated with his family to the Santa Ynez Valley from San Jose, where he served as assistant superintendent at Union Elementary.

Getting straight to work, Schwab looks to a meaningful and inherited project on the horizon: renovation of the campus kitchen, which will be transformed into a state-of-the-art teaching facility starting this winter.

"Target of construction is this December," he said. "That's moving along. I'm really excited to be working with our team on that, and having that facility ready to go next school year for our kids."

COVID-19 in Santa Barbara County | By The Numbers

Under Schwab's direction, the district also will roll out a new 1:1 technology initiative starting Aug. 30, issuing a MacBook Air to each student, both on campus and at home.

In the meantime, Schwab said he has been settling into his new role and connecting with students since their return to campus on Aug. 12.

"I was out talking to kids today," he said. "I got to walk into a few classrooms and say hi."

Classrooms at both Santa Ynez Valley High School and Refugio High School are once again mostly full, according to Schwab, with 863 students back on campus and 16 students learning from home after opting to enroll in the district's independent study program.

"But the majority of students are back on campus," he said. "I think everyone is really happy to see everybody in person. It's been really nice."

Solvang leaders grapple over vision statement, lack of reference to Chumash and Spanish

Solvang leaders dipped a toe into the nitty-gritty of the city's general plan Monday during a joint meeting of the City Council and Planning Commission, but found early dissension among the ranks after repeatedly ignoring requests to include reference to Chumash and Spanish predecessors high in the visioning document.

Protect. Respect. Let's fight COVID-19 together. Not against ourselves

The latest return to masking, whether you think it will work or not, feels completely avoidable because a safe and effective vaccine is readily available. Debates around masking seem to have taken our eye off the real target, getting as many people vaccinated as possible as quickly as possible.