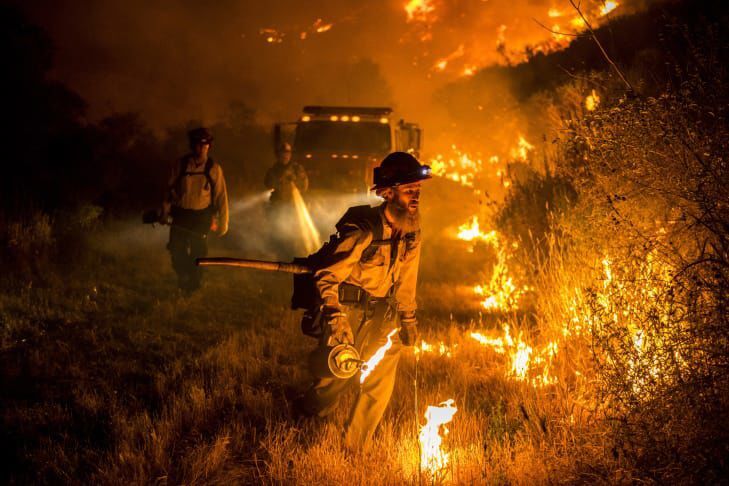 The Sherpa fire, which started around 4 p.m. on June 15, 2016, was caused by a resident of The Rancho La Scherpa who was burning a log in his fireplace when the winds picked up and sent smoke into his home. 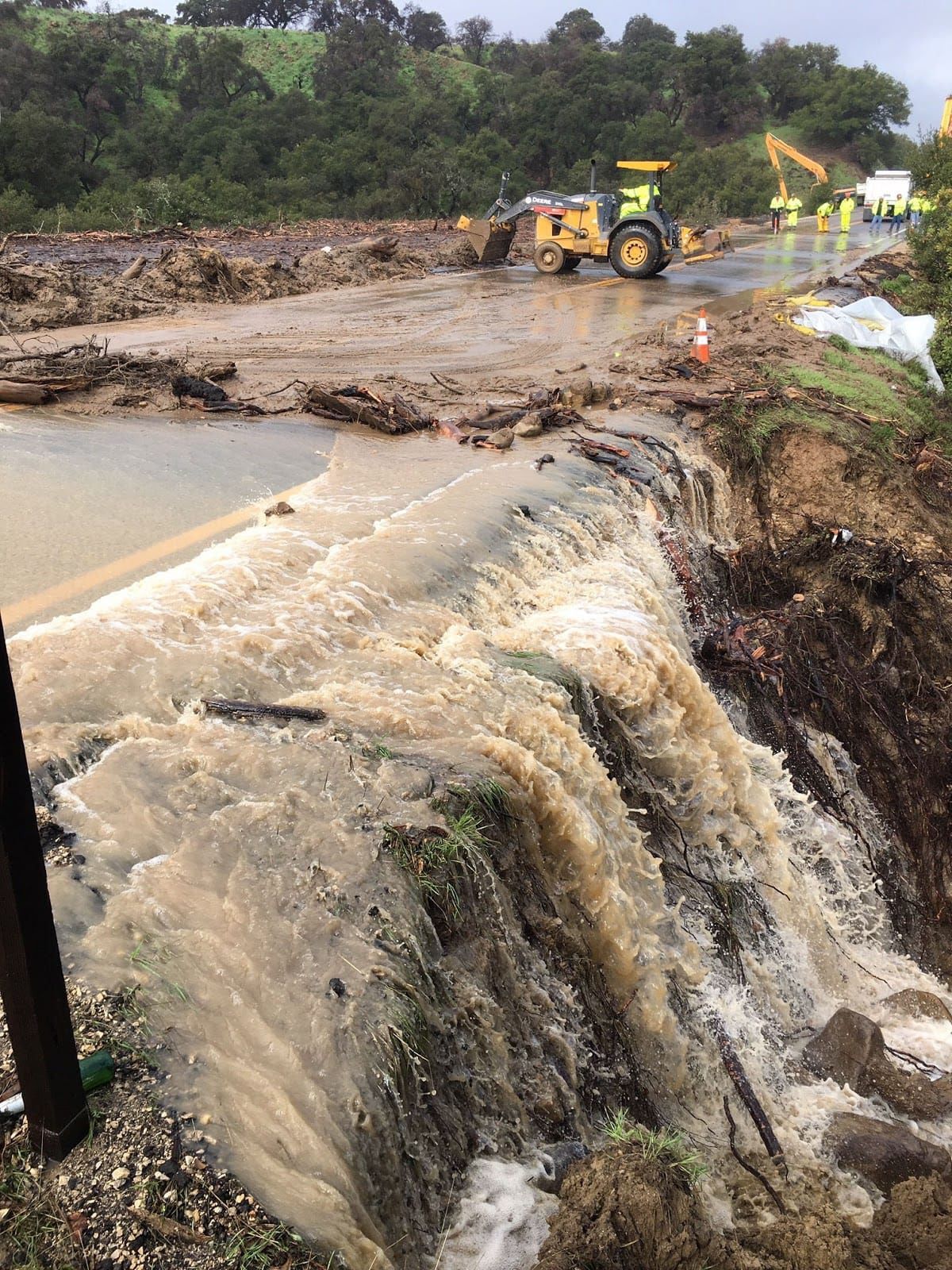 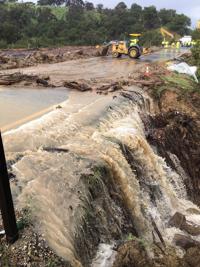 A debris flow from Duval Canyon in the Whittier fire burn scar clogged and damaged a culvert, shutting down Highway 154 for a month in February 2019. 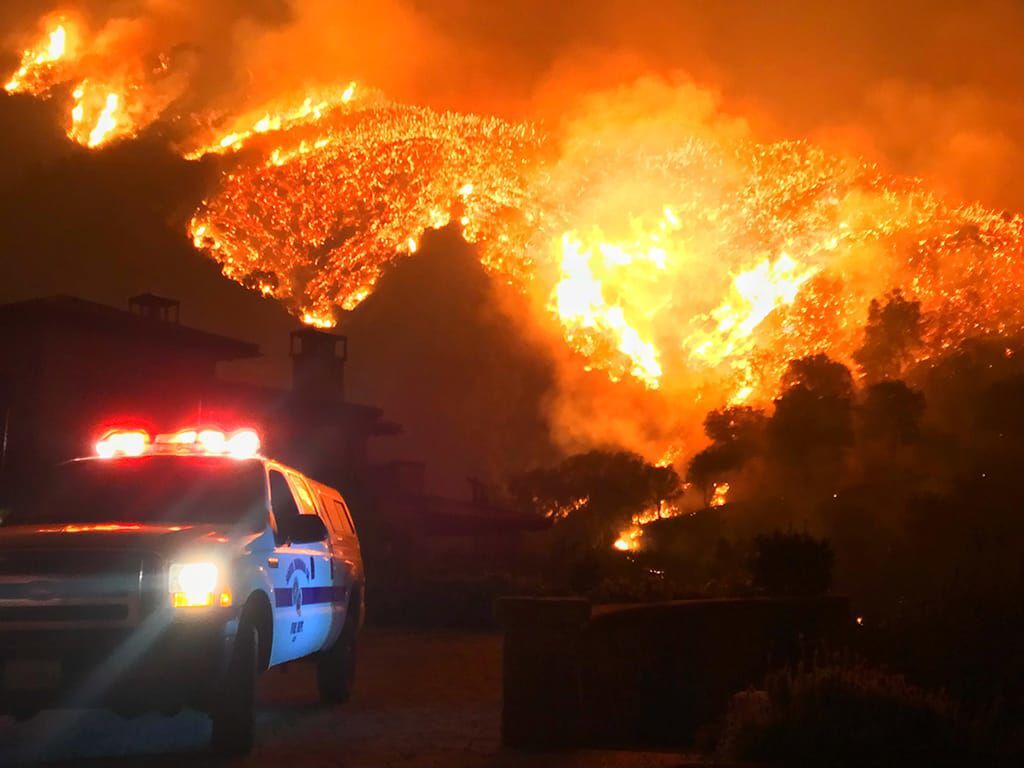 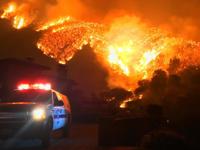 The Thomas fire started in Ventura County near St. Thomas Aquinas College in Santa Paula on Dec. 4, 2017. It was caused by power lines blowing together (called line slap), sending sparks into the dry brush below.

The Sherpa fire, which started around 4 p.m. on June 15, 2016, was caused by a resident of The Rancho La Scherpa who was burning a log in his fireplace when the winds picked up and sent smoke into his home.

A debris flow from Duval Canyon in the Whittier fire burn scar clogged and damaged a culvert, shutting down Highway 154 for a month in February 2019.

The Thomas fire started in Ventura County near St. Thomas Aquinas College in Santa Paula on Dec. 4, 2017. It was caused by power lines blowing together (called line slap), sending sparks into the dry brush below.

This is the fourth and final article on the history of wildfires in Santa Barbara County. As I draft this article, major fires are burning in both northern and southern California. In Southern California’s Orange County, over 70,000 people have been forced to evacuate and 150,000 people are without power.

So far we are good in Santa Barbara County, but until the first major rain, we are still in danger as our last major fires were during the months of November (Cave fire) and December (Thomas fire).

Sherpa fire, June 2016: The Sherpa fire, which started around 4 p.m. on June 15, was caused by a resident of The Rancho La Scherpa who was burning a log in his fireplace when the winds picked up and sent smoke into his home. When the man carried the burning log to an outdoor water faucet, embers fell onto the ground and sparked the blaze.

Strong Sundowner winds drove the fire down the Santa Ynez Mountains into an area of dry grass and chaparral along the Gaviota Coast. The area had not burned since the 1955 Refugio fire.

The blaze quickly grew to over 1,400 acres and prompted evacuation orders for El Capitan and Refugio state beaches as well as for the ranches in El Capitan Canyon. Both Highway 101 and the Southern Pacific Railroad were closed. By evening, the fire had grown to over 4,000 acres and destroyed the water system for El Capitan State Beach, which remained closed for weeks. Refugio Beach reopened on June 26.

At the peak of the fire, 2,000 firefighters were on site to try to contain the fire. The fire was contained on July 12, but due to the threat of flare-ups within the burn area, patrols continued for several days. However, the damage was not over.

Six months later, on Jan. 20, 2017, a powerful rainstorm struck the mountains along the Gaviota Coast. The heavy downpour quickly overwhelmed the creeks and other canyon drainages. Historic adobe dwellings in Las Flores Canyon were destroyed by flooding and debris. Nearby El Capitan Canyon Resort sustained severe damage and two dozen campers had to be rescued.

Rey fire, August 2016: The fire is named for the area it started, along Paradise Road near Rancho San Fernando Rey and White Rock Picnic Area. The cause was a tree falling on power and communication lines, which ignited dry brush below.

Over 300 people had to be evacuated from their campsites and residences. Within four days, the fire had burned 23,546 acres and by the time it was contained, 32,606 acres had burned. Over 10,000 of those acres were on Rancho San Fernando Rey itself and 19,752 were in the Los Padres National Forest. The fire was fought by 1,260 firefighters, 28 crews, 48 engines, 11 aircraft, two helicopters and numerous bulldozers. A high priority was protecting the Santa Ynez watershed.

“After the 2007 Zaca Fire, sediment infill shrank the holding capacity of Gibraltar Reservoir — upstream from Cachuma — by thousands of acre-feet,” Fayram said. He added that ash-laden rain runoff also was more difficult for water treatment facilities to process. The fire was finally contained on Sept. 16, 2016, 28 days after it had started. No structures or homes were burned.

Whittier fire, July 2017: The Whittier fire started above Camp Whittier along Highway 154 on July 8, 2017. It was caused by a preteen driving a car through long, dry grass.

Heat from the catalytic converter, or a spark from the car’s exhaust, ignited the grass. Before it was finally contained on Oct. 5, it had burned 18,480 acres and destroyed 53 structures, many at the Boy Scout camp, Rancho Alegre. Thousands of campers in and around the Cachuma Lake Recreation area and nearby Paradise Road had to flee, leaving eerie ghost towns of pitched tents and picnic lunches on the tables as they fled.

The real story of this fire is the heroic rescue of 83 people, including 56 young campers, who were trapped at the Circle V Camp by the rapid-moving fire. Santa Barbara County sheriff’s deputies, including a convoy of eight patrol cars, would repeatedly try to reach the camp, only to be turned back by walls of flame, thick smoke and falling flaming debris. It was decided the campers would have to shelter in place.

Dave Dahlberg, a Forest Service patrolman, had trained for structure protection in simulations at Circle V Camp and was familiar with the area. He managed to drive a mile-and-a-half up an access road and reached the camp. He calmed the campers, got them to safety inside the dining hall, and started to prepare the area around the building to resist the fire, which was less than 600 feet away.

Firefighter Mark Linane then offloaded his bulldozer and worked to cut fire lines on the Camp Whittier side of the blaze. When he heard there were kids trapped at the Circle V Camp, he turned his dozer and headed for the camp. He was confident he could get there as his all-metal dozer could take a lot more heat than the patrol cars. Linane made it and started bulldozing fire breaks around the building sheltering the campers. (Dahlberg had kept the youths calm and safe for two hours until Linane arrived.)

Finally, thanks to helicopters dropping water to douse the flames along the road to the camp, Sheriff’s Search and Rescue Team members made it to the camp with rescue vehicles and the campers and staff were loaded up and transported to Highway 154. Among the many heroes of this story is the Chumash Casino, who sent their buses up the flaming Highway 154 to transport the campers to safety once they had reached the highway.

Dave Dahlberg was introduced and honored by President Donald Trump at the Jan. 30, 2018, State of the Union Address for his heroic act.

In the span of one hour on July 7, the fire went from 500 acres to 3,000 acres. Before being brought under control, it burned a total of 28,687 acres. Homes and ranches in the Blazing Saddles, White Oak, Tepesquet and Buckhorn areas were evacuated as the fire repeatedly jumped containment lines. An evacuation center for large animals was set up at the Santa Maria Elks/Unocal Event Center. The Santa Maria Animal Shelter on Foster Road accepted small animals. The Santa Maria Valley Humane Society helped by taking in several shelter dogs to free up space for the evacuated animals.

Thanks to over 1,000 firefighters, four fixed-wing planes, five helicopters, four bulldozer teams, 10 hand crews and five water tankers, only one home and one outbuilding was destroyed. One of the factors that made fighting this fire so difficult was that the Whittier fire mentioned above was going on at the same time, so resources were stretched thin. Fire crews from Los Angeles and Orange counties jumped in to help.

Thomas fire, Dec. 2017: The fire started in Ventura County near St. Thomas Aquinas College in Santa Paula on Dec. 4, 2017. It was caused by power lines blowing together (called line slap), sending sparks into the dry brush below. It burned 155,000 acres before moving into Santa Barbara County near Divide Peak.

The fire, fed by strong Santa Ana winds, spread into the Santa Ynez Mountains and parts of the upper Santa Ynez River watershed during its march west toward Carpinteria, Montecito and Santa Barbara. The fire caused over $2.2 billion in damages and cost over $204 million to fight. It forced over 104,607 residents to evacuate and needed 8,500 firefighters to finally contain it. It burned a total of 281,893 acres and destroyed over 1,000 homes in Ventura and Santa Barbara counties, combined. However, the worst was yet to come for Santa Barbara County.

In January, heavy rains in the mountains above Montecito caused sudden flooding and debris flow that killed 23 people, destroyed 129 residences and damaged an additional 307 homes. All roads in the area were closed, including Highway 101.

Cave fire, Nov. 2019: The Cave fire (named as it originated near Painted Cave on East Camino Cielo) started from unknown causes on Nov. 26, 2019. High winds drove the fire down toward Goleta and Santa Barbara.

The fire threatened 2,400 homes and forced 5,500 people to flee. Mandatory evacuations were ordered for areas north of Cathedral Oaks Road between Patterson Ave. and Highway 154 and areas of Foothill Road between Highway 154 and North Ontare Road. Before being put out by a rainstorm, the fire burned 4,367 acres, caused power outages from areas in Goleta to Carpinteria, and closed Highway 154 for days. Fortunately, no homes were damaged and the feared debris flow from the rain did not materialize.

However, this fire reminds us that until we get the first significant rainfall, fire danger remains high — even in November. Be safe out there.

More in 23 stories explaining the Central Coast's history, landscape, and traditions from Judith Dale (8 of 23)