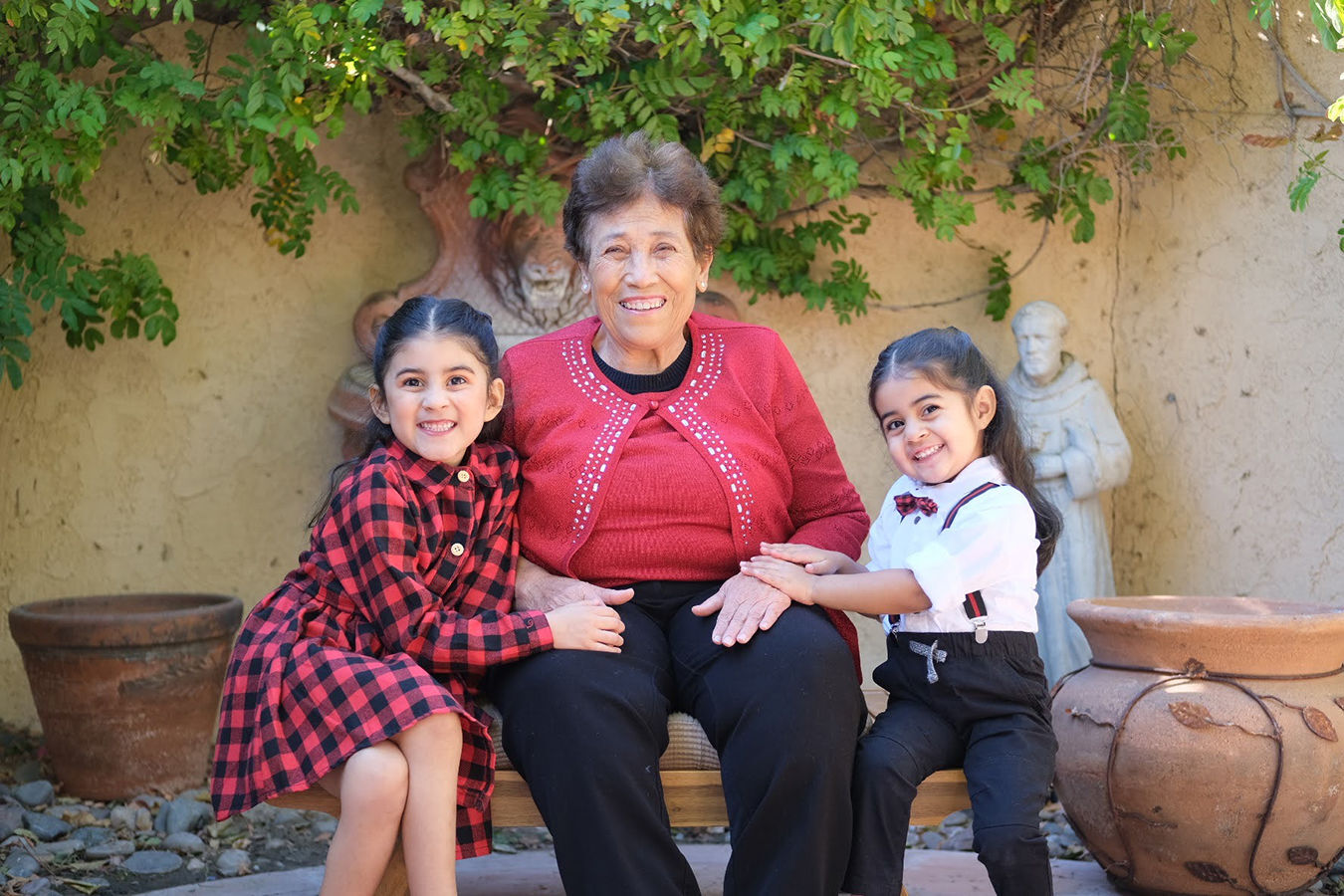 Laura Chavez is caretaker to both her mother, Esperanza (center), and her children, Ava (left) and Alina. Esperanza Chavez has diabetes but doesn’t qualify for Medicare because of her immigration status. The family can’t afford to buy a comprehensive insurance plan on the open market. Now a bill in the California legislature could require state-regulated private plans to cover policyholders’ dependent parents. 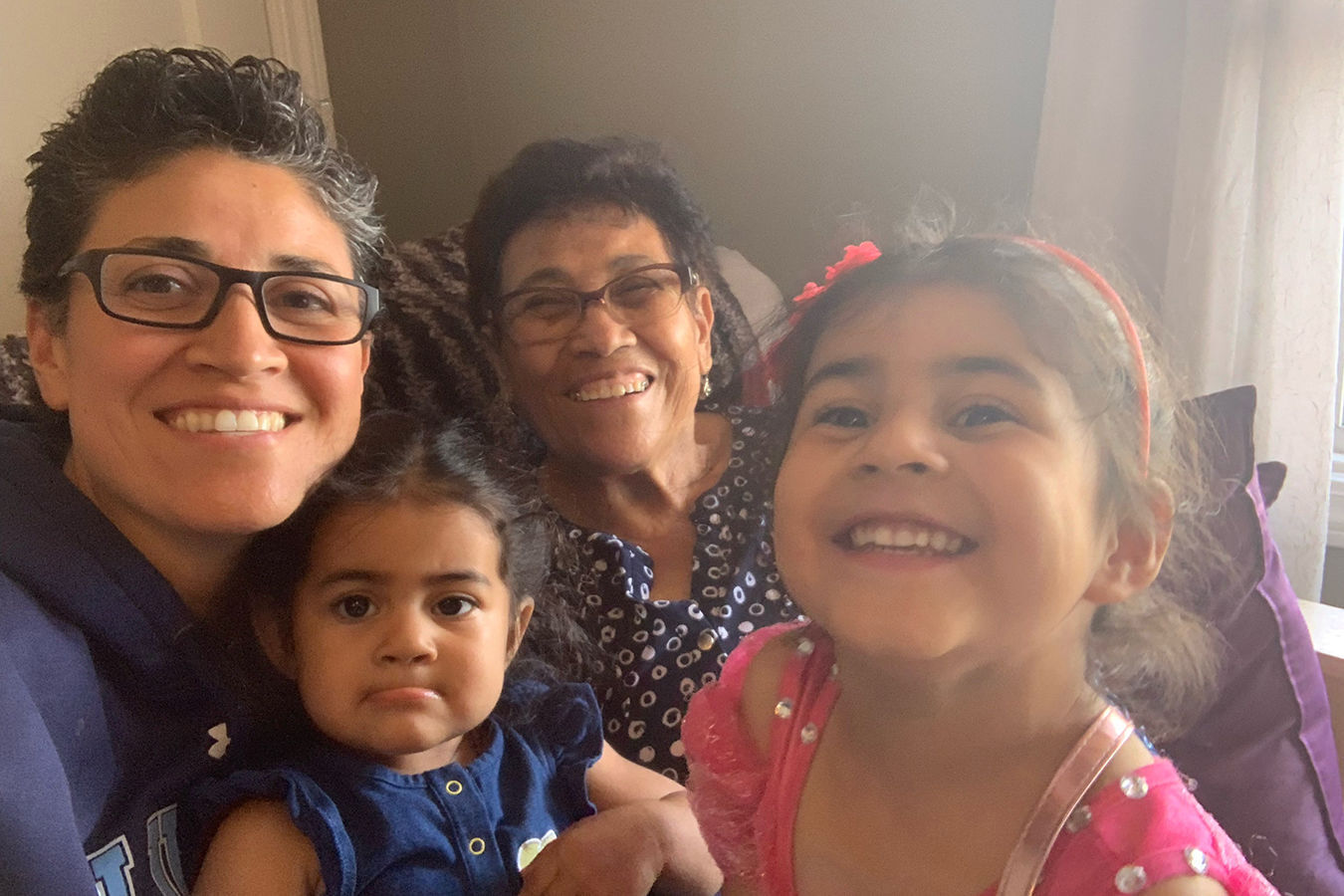 Esperanza Chavez (center) has diabetes but doesn’t qualify for Medicare because of her immigration status. She can’t find a private health insurance plan under $1,000 a month. Daughter Laura Chavez (left) says they’re forced to make decisions based on cost “rather than ‘Is this medication really going to help keep you alive and healthy?’”

Her mom, Esperanza Chavez, doesn’t qualify for Medicare because of her immigration status. And she can’t find a private health insurance plan under $1,000 a month.

“We’re constantly having to make decisions based on costs rather than ‘Is this medication really going to help keep you alive and healthy?’” said Laura Chavez, 41, a San Franciscan whose mother has diabetes. “It’s just unfair to have to think about it that way.”

Now a California lawmaker is pushing a bill that would require private health plans regulated by the state to extend coverage to some subscribers’ parents. Business groups and others fear the legislation could jack up insurance premiums, but the bill has strong backing from health advocacy and immigrants’ rights organizations, as immigrants make up a sizable portion of California’s uninsured population.

Policyholders can already add children up to age 26 to their health plans — a benefit available nationally under the Affordable Care Act. But California would be the first state to extend the benefit to dependent parents, who are expensive to cover because they are older and sicker than the overall population, health experts say.

“This is groundbreaking and, quite frankly, a shift in the paradigm about the way we think about people getting health care,” said Assembly member Miguel Santiago (D-Los Angeles), author of AB 570. “The bottom line is we want everybody to get health care, and we will fight every angle to ensure that people get adequate health care.”

Many states have experimented with how to cover America’s roughly 33.2 million uninsured people, about 400,000 of whom are 65 or older. California’s income-eligible children can receive public health insurance regardless of their immigration status, New Jersey parents can cover a dependent child up to age 31, and Floridians can cover their kids up to age 30 so long as they aren’t married or don’t have dependents of their own.

One group that would benefit from California’s legislation, backers say, would be green card holders who haven’t met the five-year waiting period to qualify for Medicare and Medicaid, and those here without legal permission.

While striving to cover parents is a laudable goal, said Sherry Glied, a former assistant secretary at the U.S. Department of Health and Human Services during the Obama administration, employers could face higher insurance premiums.

Glied fears some people would abuse the coverage. For instance, she said, someone could bring an ailing parent into the country on a tourist visa, sign them up on their employer’s health plan and arrange for the treatment they need.

California already gives income-eligible unauthorized immigrants up to age 26 full benefits from Medi-Cal, the state’s version of Medicaid for low-income people. Lawmakers are considering separate proposals to further broaden Medi-Cal eligibility. One bill targets undocumented immigrants age 65 and up, and another would make all Californians eligible regardless of age or immigration status. Similar efforts have failed repeatedly over the past several years because of cost concerns, but California now has a $75.7 billion budget surplus.

Unlike the Medi-Cal measures, which rely on state funding, the bill authored by Santiago, working with California Insurance Commissioner Ricardo Lara, would transfer the cost onto employers and insurance companies. It would allow parents or stepparents — regardless of age — whose children claim them as dependents on their taxes to be added to private health plans regulated by the state. They include job-based plans and those purchased on the open market or through Covered California.

Employer-sponsored plans regulated by the federal government would not be subject to the bill.

The Assembly Health Committee has approved the bill, which needs to clear the Assembly Appropriations Committee before heading to the full Assembly for a vote.

It’s hard to pinpoint how many Californians could benefit from the measure. Nationwide, about 3.4 million people were claimed as dependents on their children’s tax returns in 2019, and an estimated 400,000 of them lived in California, according to an analysis by the California Health Benefits Review Program.

The overwhelming majority of those parents already have health coverage through Medicare or Medicaid, the analysis concluded, leaving 20,000 to 80,000 Californians who could benefit.

Despite the relatively small number, California employers say this mandate would raise premiums by $200 million to $800 million a year, depending on how many people signed up.

“Small employers will be forced to reassess how much they can contribute to employees’ dependent premiums,” Preston Young, a policy advocate at the California Chamber of Commerce, told lawmakers at a recent Assembly Health Committee hearing.

Lara, California’s insurance commissioner — whose parents were once undocumented immigrants — said the bill would help the poorest of the Golden State’s families, giving those with no other options “substantial peace of mind.”

“When we needed care as children, our parents were always there for us,” Lara said. “As our parents age, a lot of us in turn have become their caretakers.”

Chavez finds herself in the role of caretaker to her children and her mother. She has insurance for herself and her two daughters through her employer, the nonprofit organization Challenge Day.

But she can’t afford to buy a comprehensive insurance plan for her mom on the open market. A bare-bones policy, Chavez said, costs more than $1,000 a month because her mom has preexisting conditions. She doesn’t qualify for Medicare or Medicaid because she is in the United States without authorization.

If Chavez could add her mom to her job-based policy, she wouldn’t have to pay cash for her mom’s needs, and the whole family could share one deductible and one cap for out-of-pocket costs, she said.

“It would bring significant financial relief,” Chavez said. “Every month, there are charges we have to budget for and pay for. God forbid she has to go to the emergency room.”