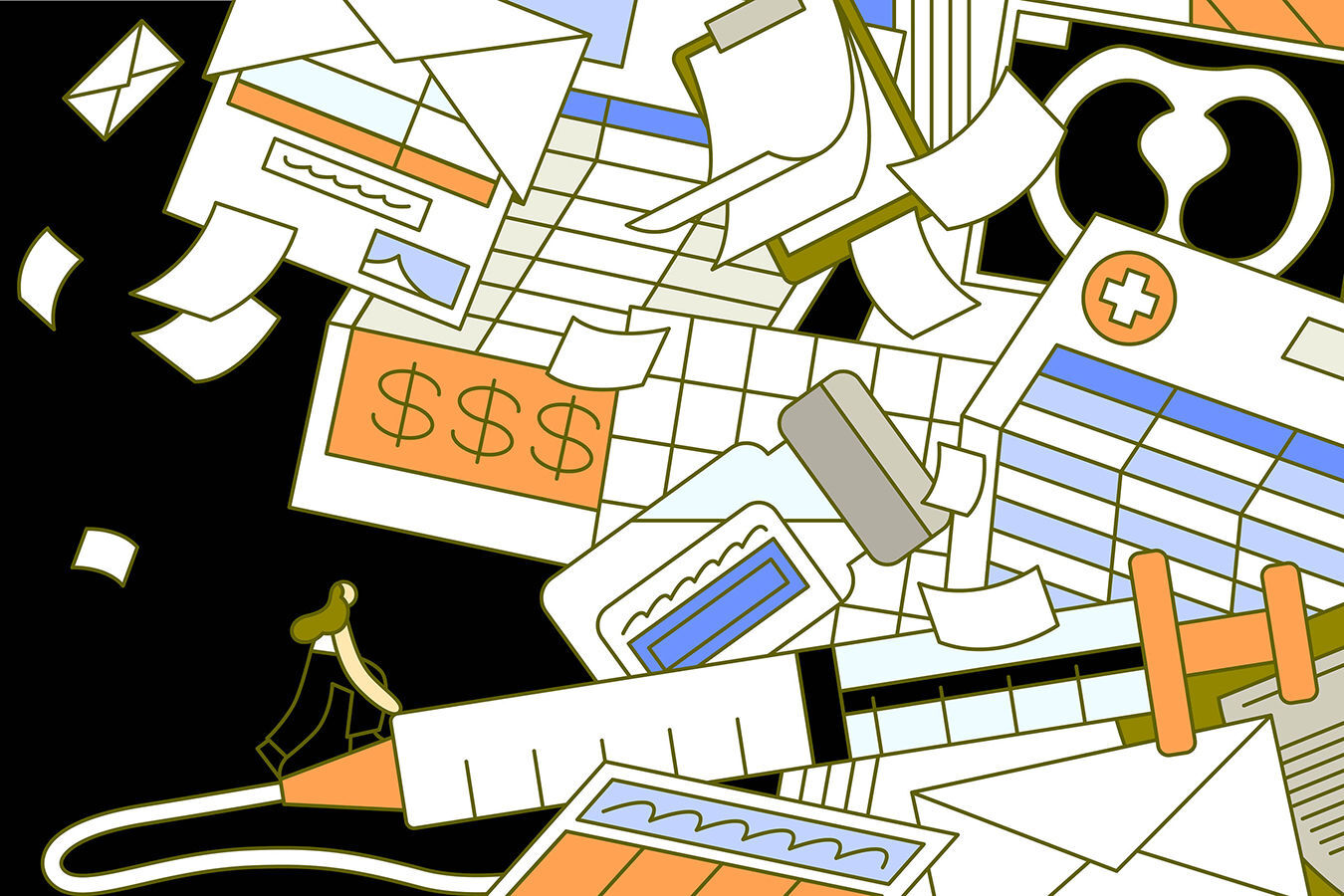 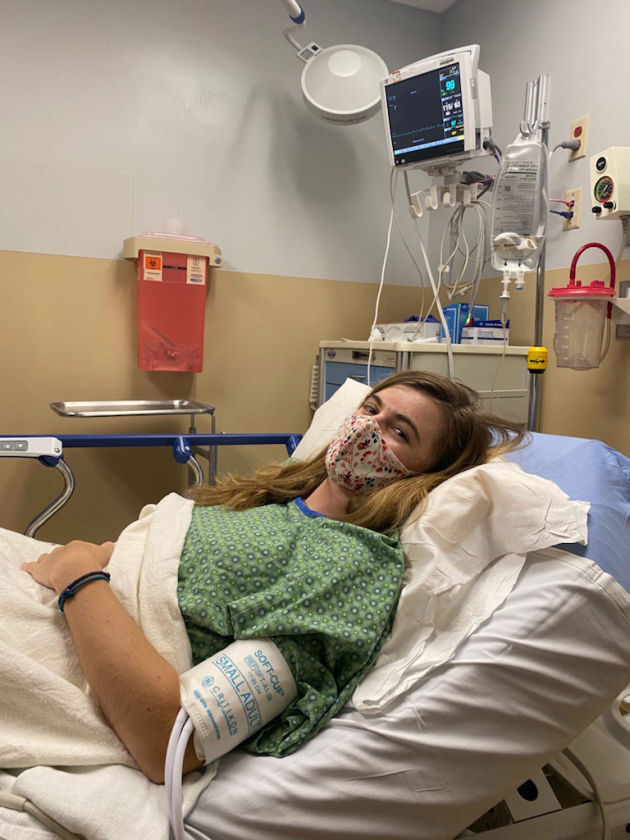 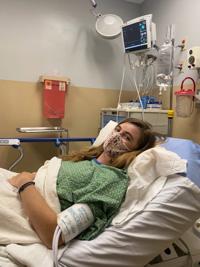 Claire Lang-Ree received a CT scan and pain medications in the ER at Penrose Hospital in Colorado. She still doesn’t know what caused her intense abdominal pain, and the hospital charged more than $18,000 for the visit. (Patrick Kerwin) 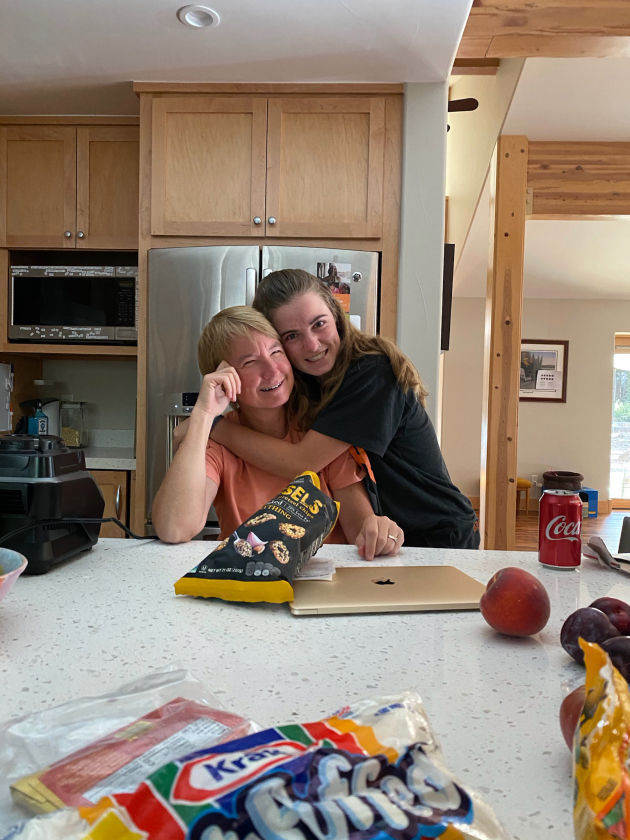 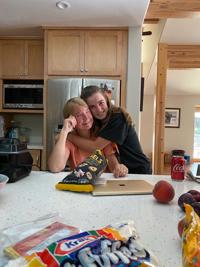 Claire Lang-Ree was in a lab coat taking a college chemistry class remotely in the kitchen of her Colorado Springs, Colorado, home when a profound pain twisted into her lower abdomen. She called her mom, Jen Lang-Ree, a nurse practitioner who worried it was appendicitis and found a nearby hospital in the family’s health insurance network.

After a long wait in the emergency room of Penrose Hospital, Claire received morphine and an anti-nausea medication delivered through an IV. She also underwent a CT scan of the abdomen and a series of tests.

Hospital staffers ruled out appendicitis and surmised Claire was suffering from a ruptured ovarian cyst, which can be a harmless part of the menstrual cycle but can also be problematic and painful. After a few days — and a chemistry exam taken through gritted teeth — the pain went away.

Then the bill came.

Patient: Claire Lang-Ree, a 21-year-old Stanford University student who was living in Colorado for a few months while taking classes remotely. She’s insured by Anthem Blue Cross through her mom’s work as a pediatric nurse practitioner in Northern California.

What Gives: As hospitals disaggregate charges for services once included in an ER visit, a hospitalization or a surgical procedure, there has been a proliferation of newfangled fees to increase billing. In the field, this is called “unbundling.” It’s analogous to the airlines now charging extra for each checked bag or for an exit row seat. Over time, in the health industry, this has led to separate fees for ever-smaller components of care. A charge to put medicine into a patient’s IV line — a “push fee” — is one of them.

Though the biggest charge on Claire’s bill, $9,885.73, was for a CT scan, in many ways Claire and her mom found the push fees most galling. (Note to readers: Scans often are significantly more expensive when ordered in an ER than in other settings.)

“That was so ridiculous,” said Claire, who added she had previously taken the anti-nausea drug they gave her; it’s available in tablet form for the price of a soda, no IV necessary. “It works really well. Why wasn’t that an option?”

In Colorado, the average charge for the code corresponding to Claire’s first IV push has nearly tripled since 2014, and the dollars hospitals actually get for it has doubled. In Colorado Springs specifically, the cost for IV pushes rose even more sharply than it did statewide.

A typical nurse in Colorado Springs makes about $35 an hour. At that rate, it would take nearly 21 hours to earn the amount of money Penrose charged for a push of plunger that likely took seconds or at most minutes.

The hospital’s charge for just one “IV push” was more than Claire’s portion of the monthly rent in the home she shared with roommates. In the end, Anthem did not pay the push fees in its negotiated payment. But claims data shows that in 2020 Penrose typically received upward of $1,000 for the first IV push. And patients who didn’t have an insurer to dismiss such charges would be stuck with them. Colorado hospitals on average received $723 for the same code, according to the claims database.

“It’s insane the variation that we see in prices, and there’s no rhyme or reason,” said Cari Frank with the Center for Improving Value in Health Care, a Colorado nonprofit that runs a statewide health care claims database. “It’s just that they’ve been able to negotiate those prices with the insurance company and the insurance company has decided to pay it.” 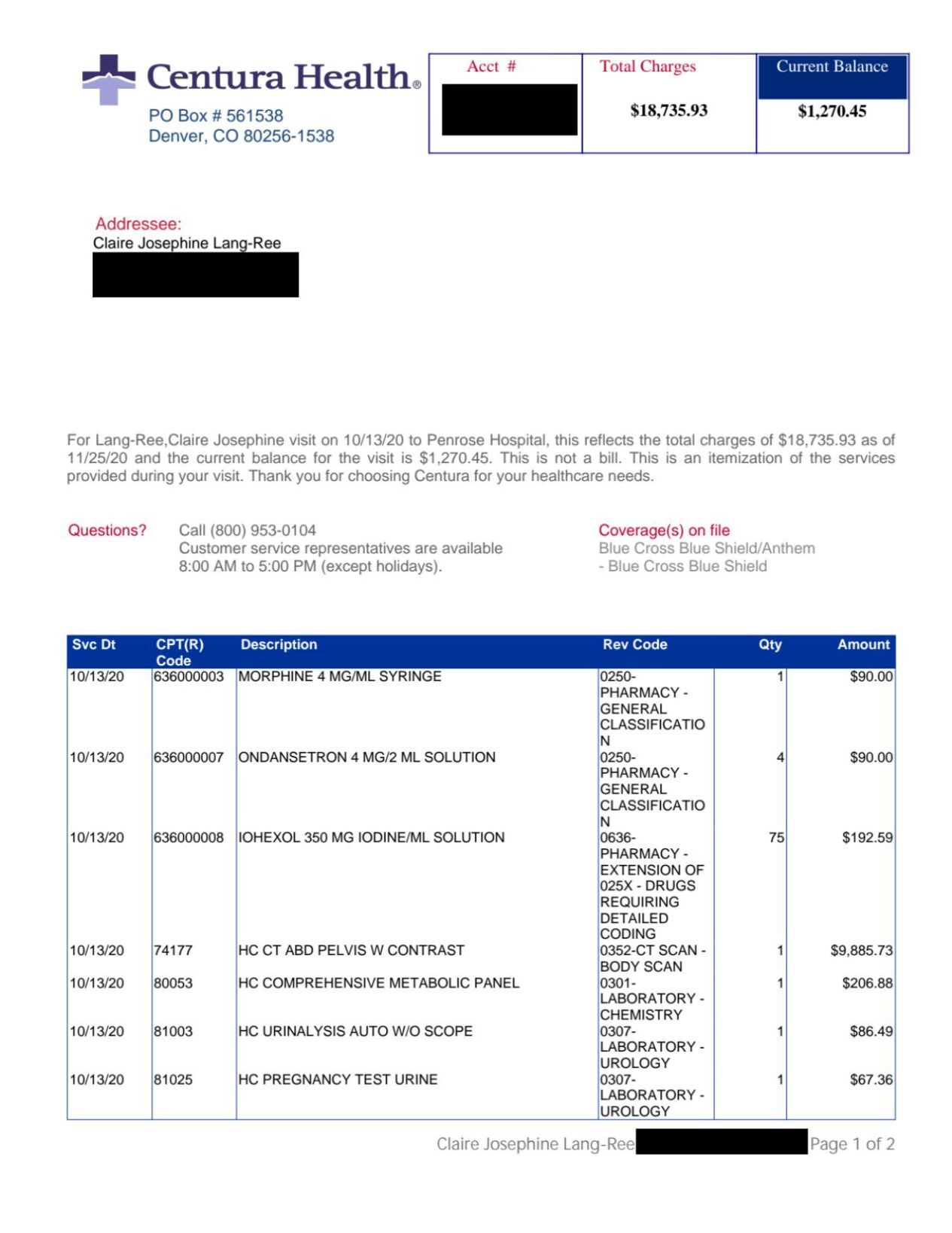 Penrose initially charged more money for Claire’s visit than the typical Colorado hospital would have charged for live birth, according to data published by the Colorado Division of Insurance.

Even with the negotiated rate, “it was only $1,000 less than an average payment for having a baby,” Frank said.

In an emailed statement, Centura said it had “conducted a thorough review and determined all charges were accurate” and went on to explain that “an Emergency Room (ER) must be prepared for anything and everything that comes through the doors,” requiring highly trained staff, plus equipment and supplies. “All of this adds up to large operating costs and can translate into patient responsibility.”

As researchers have found, little stands in the way of hospitals charging through the roof, especially in a place like an emergency room, where a patient has no choice. A report from National Nurses United found that hospital markups have more than doubled since 1999, according to data from the United States Bureau of Labor Statistics. In an email, Anthem called the trend of increasing hospital prices “alarming” and “unsustainable.”

But Ge Bai, an associate professor of accounting and health policy at Johns Hopkins University, said that when patients see big bills it isn’t only the hospital’s doing — a lot depends on the insurer, too. For one, the negotiated price depends on the negotiating power of the payer, in this case, Anthem.

“Most insurance companies don’t have comparable negotiating or bargaining power with the hospital,” said Bai. Prices in a state like Michigan, where Bai said the autoworkers union covers a big portion of patients, will look very different from those in Colorado.

Also, insurers are not the wallet defenders patients might assume them to be.

“In many cases, insurance companies don’t negotiate as aggressively as they can, because they earn profit from the percentage of the claims,” she said. The more expensive the actual payment is, the more money they get to extract.

Though Anthem negotiated away the push fees, it paid the hospital 30% more than the average Level IV emergency department visit in Colorado that year, and it paid quadruple what Medicare would allow for her CT scan.

Resolution: Claire and her mom decided to fight the bill, writing letters to the hospital and searching for information on what the procedures should have cost. The prices of the IV pushes and the CT scan infuriated them — the hospital wanted more than double what top-rated hospitals typically charged in 2019.

But the threat of collections wore them out and ultimately they paid their assigned share of the bill, $1,420.45, which was mostly coinsurance.

“Eventually it got to the point where I was like, ‘I don’t really want to go to collections, because this might ruin my credit score,’” said Claire, who didn’t want to graduate from college with dinged credit.

Bai and Frank said Maryland can be a useful benchmark for medical bills, since the state sets the prices that hospitals can charge for each procedure. Data provided by the Maryland Health Care Commission shows that Anthem and Claire paid seven times what she likely would have paid for the CT scan there, and nearly 10 times what they likely would have paid for the Level IV ER visit. In Maryland, IV pushes typically cost about $200 apiece in 2019. A typical Maryland hospital would have received only about $1,350 from a visit like Claire’s, and the Lang-Rees would have been on the hook for about $270.

Claire’s pain has come back a few times but never as bad as that night in Colorado. After visiting multiple specialists back home in California, she learned it might have been a condition called ovarian torsion. Claire has avoided reentering an emergency room.

The Takeaway: Even at an in-network facility and with good insurance, patients can get hurt financially by visiting the ER. A few helpful documents can help guide the way to fighting such charges. The first is an itemized bill.

“I just think it’s wrong in the U.S. to charge so much,” said Jen Lang-Ree. “It’s just a little side passion of mine to look at those and make sure I’m not being scammed.”

Bai, of Johns Hopkins, suggests asking for an itemized explanation of benefits from the insurance company, too. That will show what the hospital actually received for each procedure.

Find out if the hospital massively overcharged. The Medicare price lookup tool can be useful for getting a benchmark. And publicly available data on health claims in Colorado and at least 17 other states can help, too.

Vincent Plymell with the Colorado Division of Insurance encourages patients to reach out if something looks sketchy. “Even if it’s not a plan we regulate,” he wrote in an email, such departments “can always arm the consumer with info.”

Finally, make it fun. Claire and Jen made bill-fighting their mother-daughter hobby for the winter. They recommend pretzel chips and cocktails to boost the mood.

Bill of the Month is a crowdsourced investigation by KHN and NPR that dissects and explains medical bills. Do you have an interesting medical bill you want to share with us? Tell us about it!