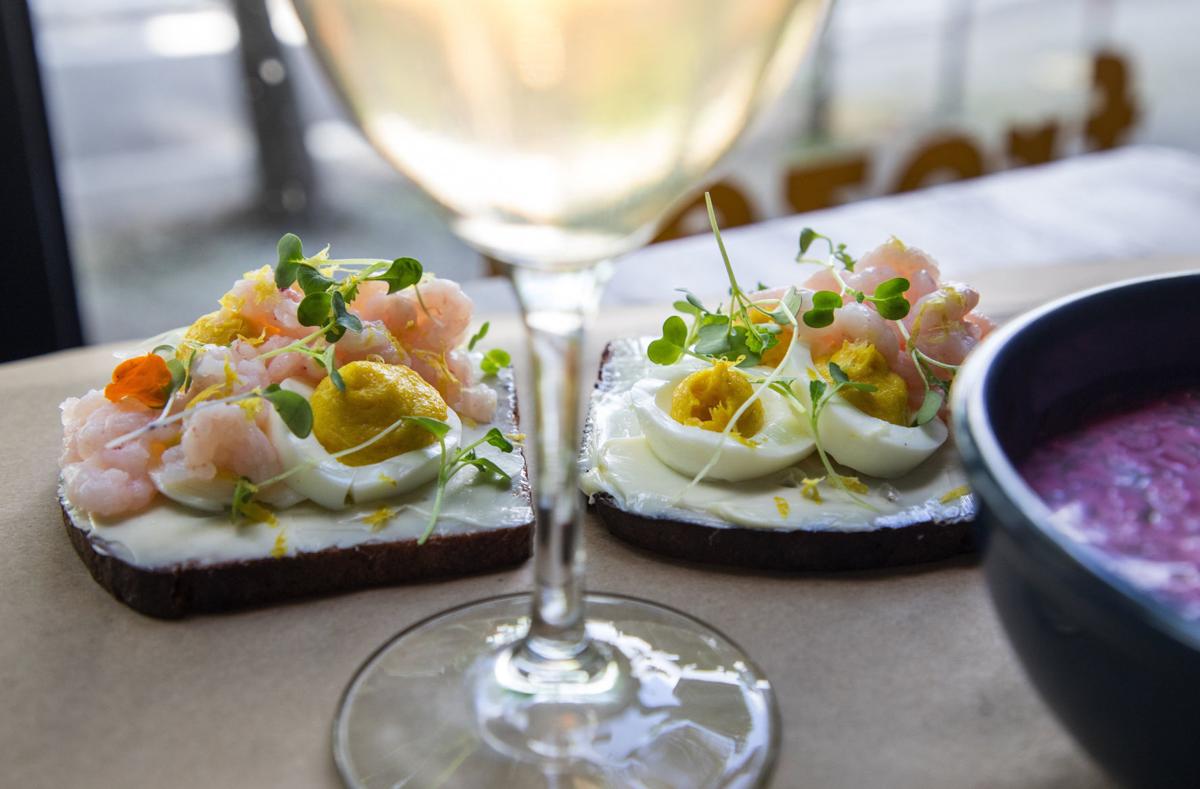 A window seat at La Dive shows off the cocktail shrimp open-faced sandwiches that are popular along with the Chlodnik at right -- chilled beet soup with kefir. 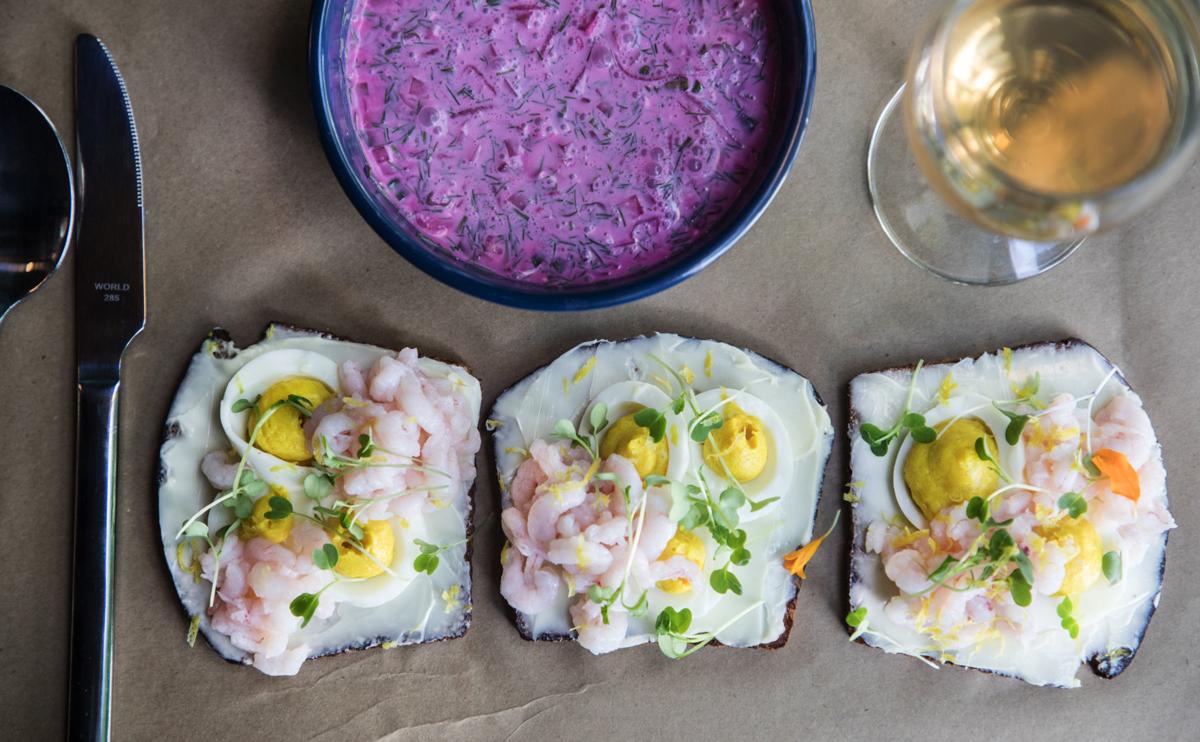 Window light illuminates the cocktail shrimp open-faced sandwiches that are popular along with chlodnik, chilled beet soup with kefir. 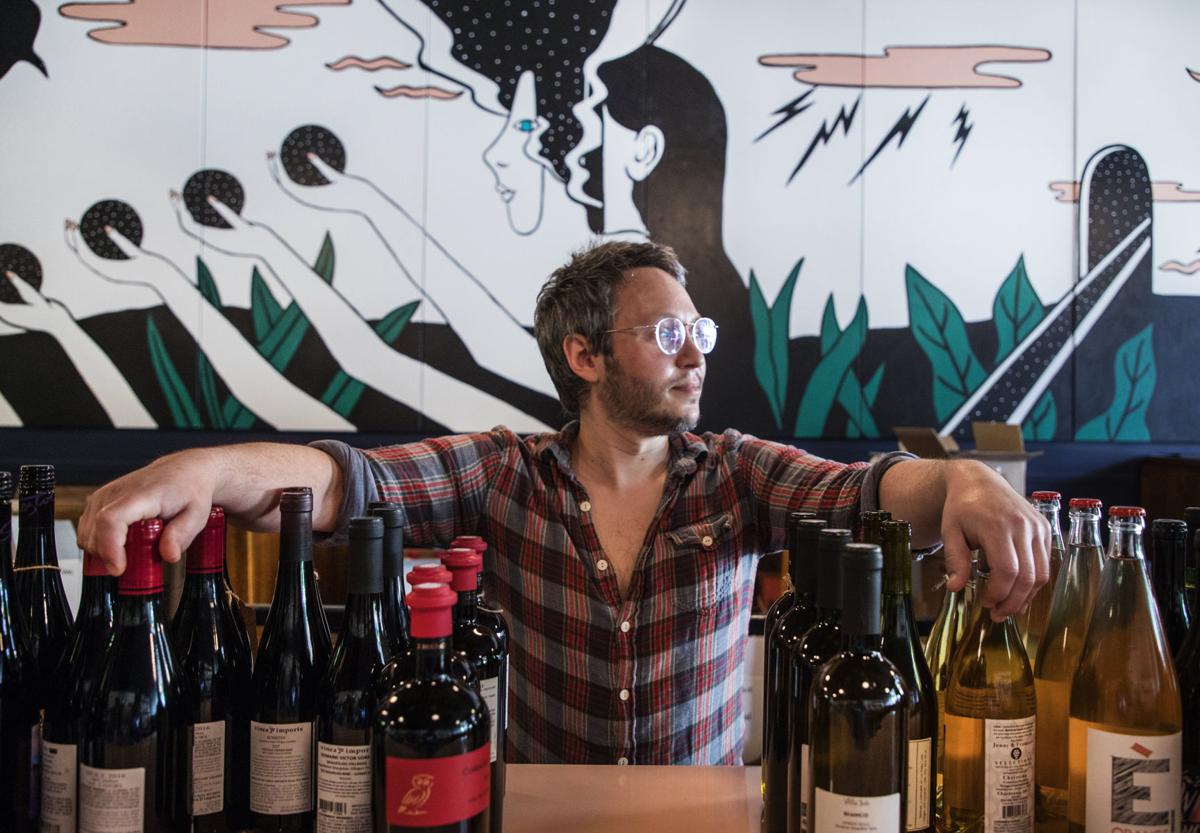 David Gurewitz, chef at the La Dive restaurant on Capitol Hill, on June 3.

Many an article about sandwiches begins with ye tired olde origin story: The Earl of Sandwich, desirous of a snack easily and ungreasily handled whilst he continued to play cards, demanded his joint of meat or giant drumstick or what have you be ensconced between two slices of bread, and so forth. The Earl's idea, born though it was of laziness and/or addiction to gambling, was an excellent one. Sandwiches are very good! It is difficult to imagine improving upon the Platonic ideal of a food-form that is the sandwich!

A version of the open-faced sandwich did manage to capture the fickle American interest with the momentarily ubiquitous and unfairly vilified avocado toast. Avocado toast is good! But what's even better: tiny open-faced sandwiches, or T.O.F.S. Versions of T.O.F.S. have gained traction here as imports from other cultures, though mostly on toasted bread, e.g., crostini and tartines. What we're talking about here is like the more-seldom-seen Danish smørrebrød, in its smaller formats, or the obložene chlebicky of the Czech Republic. These adorable little open-faced sandwiches, built on the likes of a slice of an undersized loaf of rye or a diagonal of good baguette, make larger open-faced sandwiches look out of scale and oafish.

With T.O.F.S., the laborious bite-taking of a traditionally sized sandwich is exponentially reduced or even potentially eliminated, depending on their size. T.O.F.S. also offer the opportunity to engulf several types of sandwich in one sitting, rather than just the tedium of one. And while regular-sized sandwiches, whether open-faced or lidded, are generally speedily assembled, T.O.F.S. provide both a fun project and a festive eating experience during times of boredom, as well as many opportunities for aesthetic expression and nice photos for Instagram.

What goes on T.O.F.S.? This is limited only by how many different kinds of food exist and the strength of your imagination. It is never a bad idea to start T.O.F.S. with a layer of nice-quality softened butter. From there, just the beginning of the possibilities for layers of toppings include mayonnaise (yes, atop the butter), mustard (same), cream cheese, herbed ricotta, other cheese, ham, roast beef, cornichon/pickles, slices of hard-boiled egg, sardines/other tinned fish, salmon in any form, any type of caviar, potato salad, tuna salad, tuna-and-potato salad, radish, apple, tomato, olives, capers, chives, dill, parsley, basil, pesto ... A suite of around six ingredients may be combined in so many pleasing configurations! Slice your toppings thinly, then take your time and arrange them so they look very pretty, like old-timey canapes, which, hey, they pretty much are.

One Seattle chef who's exceptionally adept at T.O.F.S. is David Gurewitz of newish La Dive on Capitol Hill. His resume includes Lark, Spinasse, Mamnoon, Little Uncle, Chicago's Blackbird and Michelin-starred Guy Savoy in Paris, and he set up the very good bar food at local Standard Brewing, too. Having grown up in Minneapolis in a Jewish household, with grandparents from Belarus, Lithuania and Poland, he loves the food and drink traditions of Eastern Europe, so alongside the extremely tasty dumplings on La Dive's menu came some really lovely T.O.F.S. One of his interesting and exceptionally well-built initial combinations: Olympic Provisions kielbasa with slices of cucumber, strips of onion, a confetti of chopped chive and dots of horseradish dyed bright pink with beet juice, just for added prettiness. Another: split pea hummus, miso, walnut, pickled beet and dill.

Asked now to help us end the tyranny of the unnecessary upper slice of bread in the cutest, most fun and maximally delicious way, Gurewitz sent the recipes below. Onward, topless!

"Traditionally, these are eaten with a fork and knife, but I've been known to forego cutlery like a brute, and I think it's convenient to be able to pick them up if they, say, accompany a beverage. And note: A slice of ripe tomato makes an excellent addition or a great substitution for the shrimp as a vegetarian option." _ David Gurewitz

1. Split the hard-boiled eggs in half lengthwise and carefully scoop the yolks into a bowl, reserving the whites. Mash the yolks with a fork.

3. Combine the seasoned mayonnaise with the mashed yolks, and mix and mash until the resulting filling is as smooth as you prefer. Spoon or pipe the yolk filling back into the whites, and set aside.

4. Smear butter on the bread as generously as you dare _ there's a Danish term for spreading the butter thickly enough that you can see your teeth marks when you bite it. Top each buttered bread with two halves of deviled egg, and season each with a generous twist of black pepper and a few wisps of grated lemon zest. Top each egg with shrimp, taking care not to fully obstruct the beautiful bright-yellow yolk. Add as many shrimp as you wish _ the main thing is to not appear chintzy. Some say you shouldn't be able to see the bread under the toppings, but do whatever makes you happy. Anyway, add a few sprigs of watercress (or dill or chives), marvel at how delightful your smørrebrød are and eat!

How to Build a Herring Smørrebrød

"Perfect in its simplicity and a great start to any smørrebrød feast. Optional additions may include a dollop of sour cream or some chopped herbs, like chives or dill. And a shot of frozen vodka or aquavit." _ David Gurewitz

1. Place 1 or 2 pieces of herring on bread, and top each with a slice of onion.

With our weekly newsletter packed with the latest in everything food.

A window seat at La Dive shows off the cocktail shrimp open-faced sandwiches that are popular along with the Chlodnik at right -- chilled beet soup with kefir.

Window light illuminates the cocktail shrimp open-faced sandwiches that are popular along with chlodnik, chilled beet soup with kefir.

David Gurewitz, chef at the La Dive restaurant on Capitol Hill, on June 3.