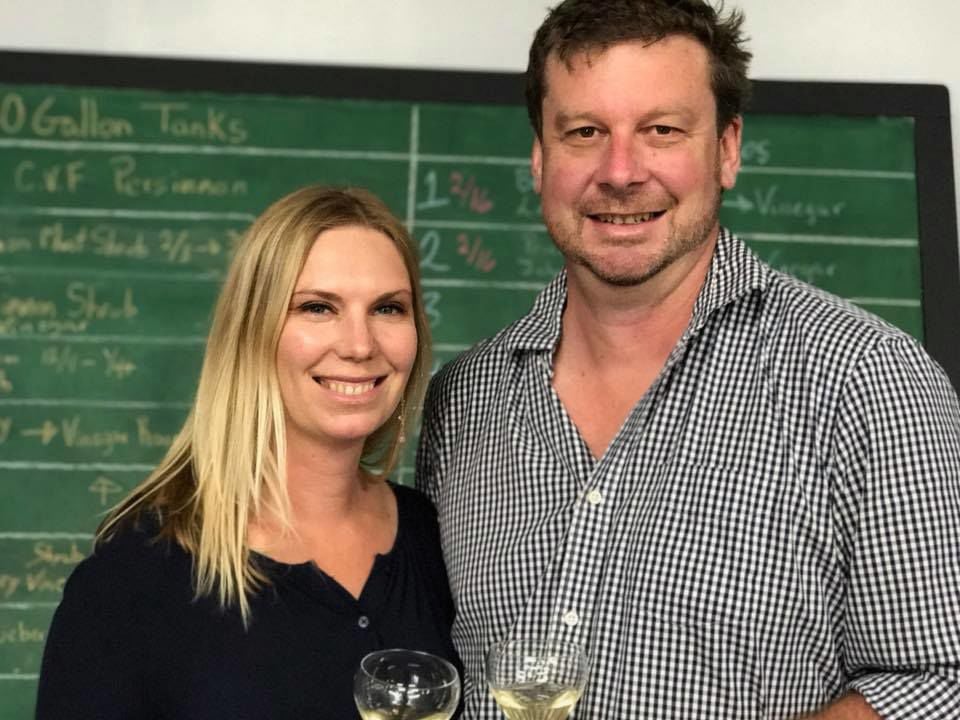 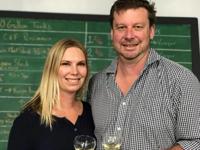 A lineup of "shrubs" produced by Broken Clock Vinegar Works of Solvang ranges from raspberry and mint to margarita. The company also produces flavored culinary vinegars. 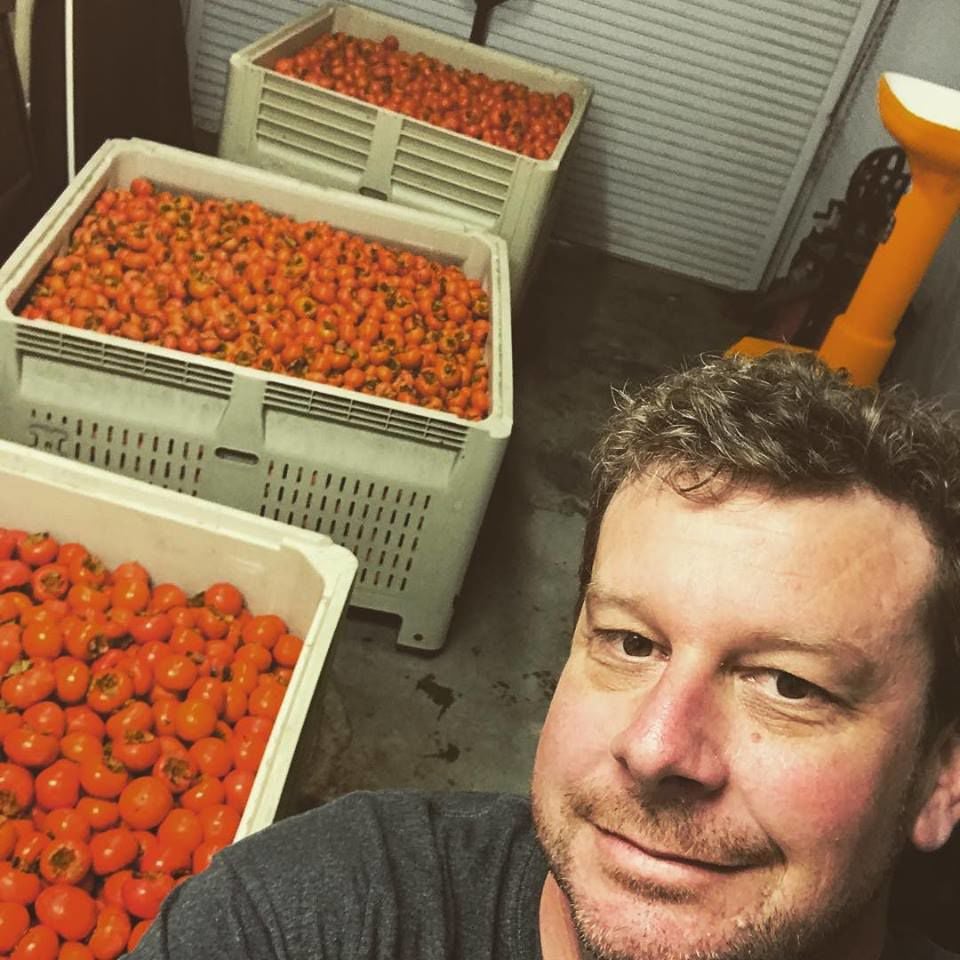 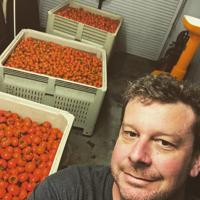 Charles Williams takes delivery of locally grown persimmons at the Shrubbery in Solvang, where Broken Clock vinegars are made.

Jody, Audrey and Charles Williams stand in front of a production tracking board at the Shrubbery, where they make flavored "shrubs" and sipping vinegars from locally grown produce, including from their own organic garden.

A lineup of "shrubs" produced by Broken Clock Vinegar Works of Solvang ranges from raspberry and mint to margarita. The company also produces flavored culinary vinegars.

Charles Williams takes delivery of locally grown persimmons at the Shrubbery in Solvang, where Broken Clock vinegars are made.

Jody, Audrey and Charles Williams stand in front of a production tracking board at the Shrubbery, where they make flavored "shrubs" and sipping vinegars from locally grown produce, including from their own organic garden.

A Solvang vinegar company captured one gold, two silver and one bronze medal in the sixth annual Central Coast Vinegar Competition, according to official results.

Broken Clock Vinegar Works took home the awards following the June 20 blind-tasting of the vinegars entered in the California Mid-State Fair competition in Paso Robles, and a vinegar the company made for another Santa Barbara County business also won a silver medal.

“I was going to the [competition] website every day looking for results,” said Charles Williams, who owns Broken Clock with wife Jody. “I was like a kid waiting for Christmas.

Wandering Dog Wine Bar is celebrating its 10th anniversary with a fun and family- and pet-friendly birthday bash April 8 from noon to 3 p.m.

“It was definitely a good day for us,” he said of the day the results appeared, noting Broken Clock also made the blueberry vinegar that won a silver medal for Santa Barbara Blueberries in Gaviota.

“So we were really pleased with that as well,” he said.

“This year’s vinegar entries were the most diverse and best to date,” McDonald said. “I look forward to see how next year can top it because these vinegars were hard to beat.”

Broken Clock’s vinegars were up against entries from all over the United States, and only three double gold, four gold, five silver and three bronze medals were awarded.

The irony of shrubs, the newest cocktail trend to hit the Central Coast, is that there is nothing new about them at all.

The Williamses have spent the last 15 years in the wine industry and, with Charles' parents, owned Wandering Dog Wine Bar in Solvang for the past 11 years.

He said they decided to try making vinegars after going to a bar that served a shrub cocktail.

“We like trying different things,” he said. “After we started home, we realized we have this big vegetable garden, and we could do this. … We started producing vinegar for shrubs and learning more and more.”

Part of that learning was also unlearning.

“In making wine, the last thing you want is for it to turn to vinegar,” Williams said. “This is just the opposite. There was a lot of trial and error. But that makes it exciting.”

Williams explained the “shrubs” contain vinegar that’s added as an ingredient, while the vinegars consist of just one or two locally grown fruits fermented together, acidified and diluted with water.

Once fermentation is complete, the product — essentially fruit wine — is transferred to the shrub room where “mother of vinegar” is added and the process of turning wine to vinegar begins.

“‘Mother vinegar’ is a base of enzymes and bacteria that converts the alcohol into vinegar,” Williams said. “It lives in the top of vinegar. But we did propagate our own. Vinegar mother is to vinegar as yeast is to wine.”

It takes 60 to 90 days from fermentation to vinegar, which is then aged in neutral oak barrels and various tanks to complete the acidification process. Once it’s deemed ready, water is added to bring it to 5 percent acidity and its bottled, raw and unfiltered with the mother.

In addition to Broken Clock’s award winners, other flavors include lemon and mint, blueberry and lemongrass, raspberry and mint, hopped mango, strawberry and ginger, and persimmon. Apricot might be next.

Williams said their drinking vinegars can be enjoyed straight, with a dash of a variety of spirits or in sparkling water, and they can be tasted at Wandering Dog Wine Bar without an appointment.

“It’s amazing how many people come in and do shots of vinegar,” Williams said.

Tastings are by appointment at The Shrubbery, where the vinegars are made, at 1210 Mission Drive, Suite 103 in Solvang.

Appointments are available by calling 805-245-7389 and on the website at www.brokenclockvinegarworks.com.

A new barrel head displayed at a Buellton restaurant commemorates the first tap where Firestone Walker Brewing Co.’s DBA was poured 22 years ago.

Charles Williams, who co-owns Broken Clock Vinegar Works with wife Jody, said they “kind of just stumbled onto the name” when they were filling out the business papers and a question arose about some item in the documents.

During the discussion, one of them said, “You’re just like a broken clock. You know, you’re right twice a day.”

Vinegars from all over the country are professionally judged with the goal of educating consumers about the quantity and styles of vinegar produced in the United States.

The vinegar contest is part of the Central Coast Wine Competition, which also includes contests for craft spirits, olive oil and packaging.