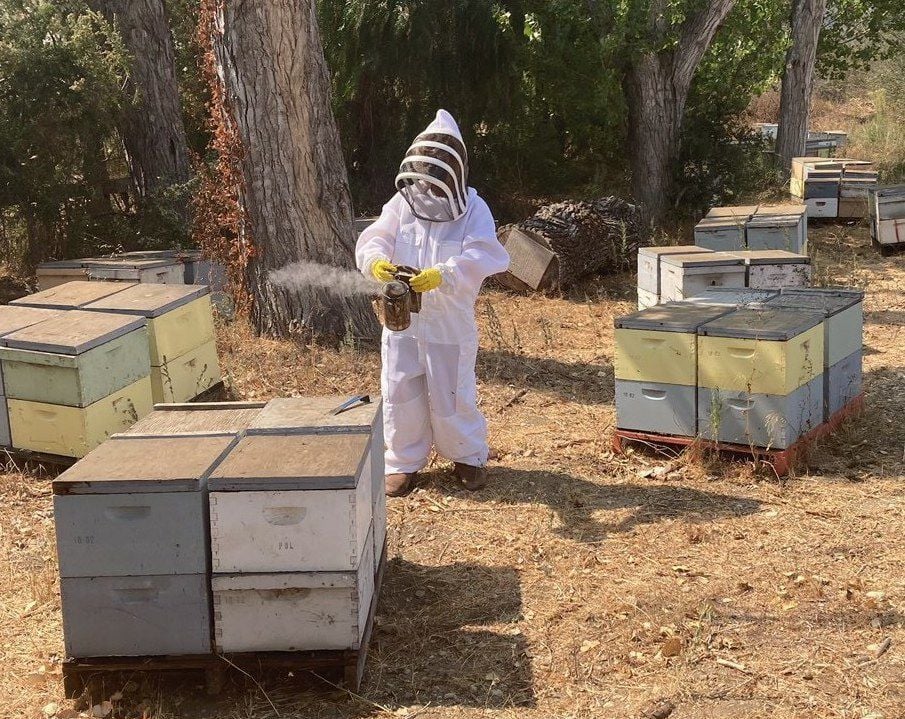 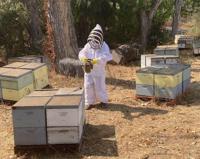 Jamie Edlin walks with a smoker through the bee hives at San Marcos Farms Honey Co. 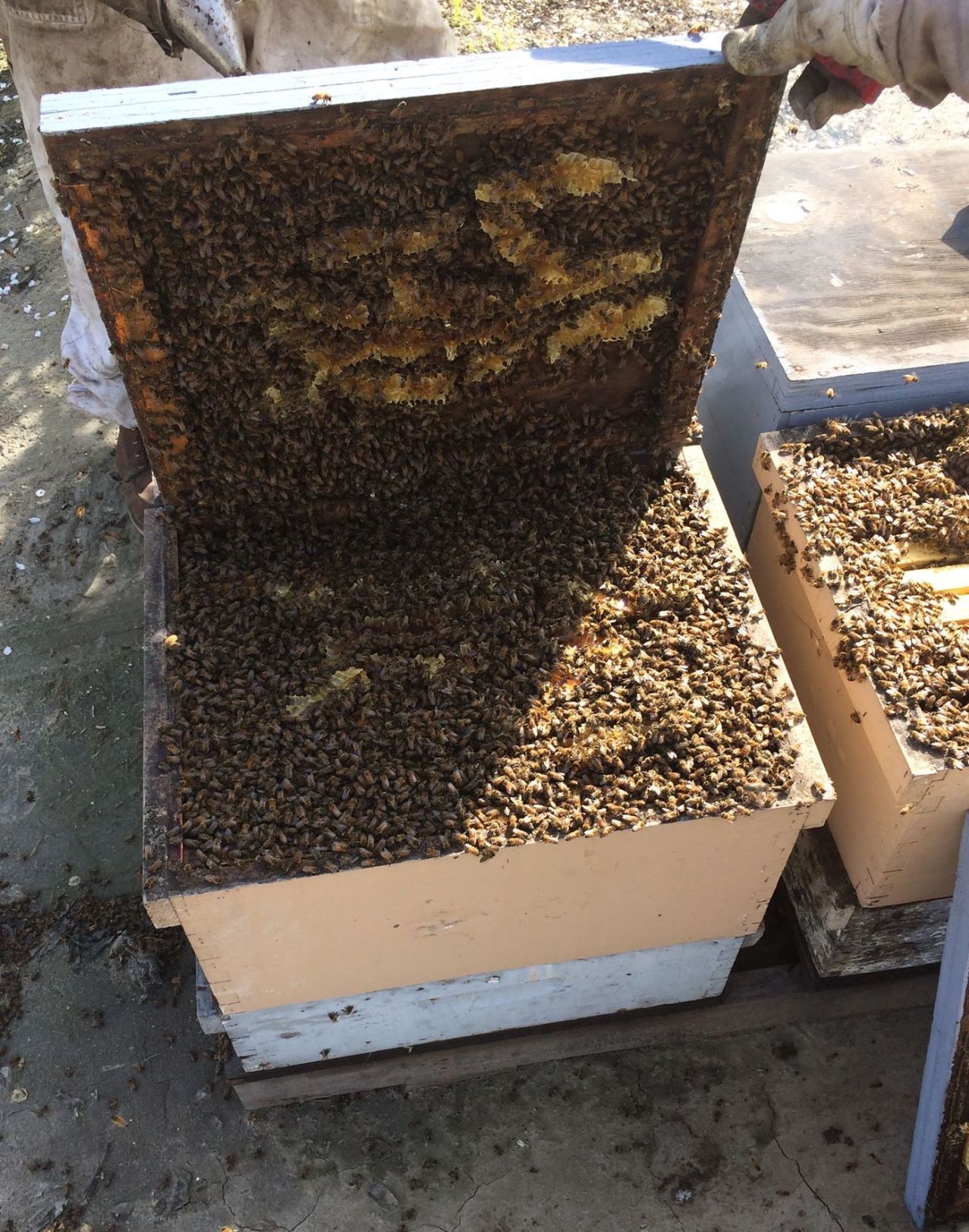 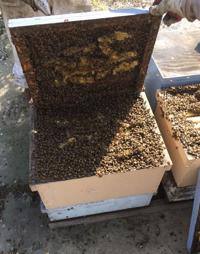 Don Cole, owner of San Marcos Farms Honey Co., opens one of his many bee boxes located in the foothills of Goleta. 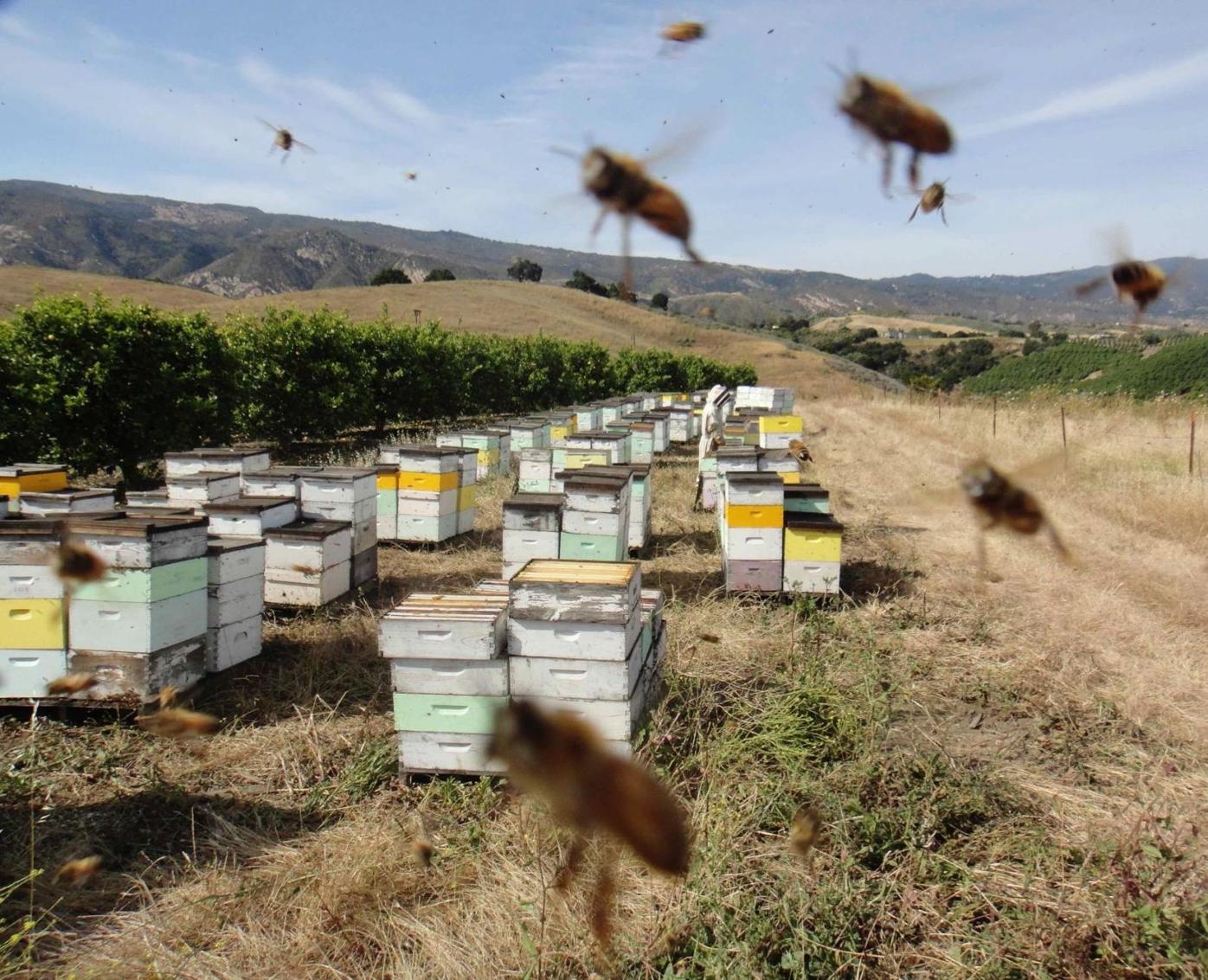 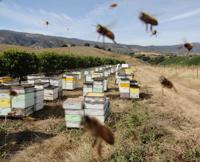 A number of beehives tended by Don Cole are located at San Marcos Farms Honey Co. in the foothills of Goleta. 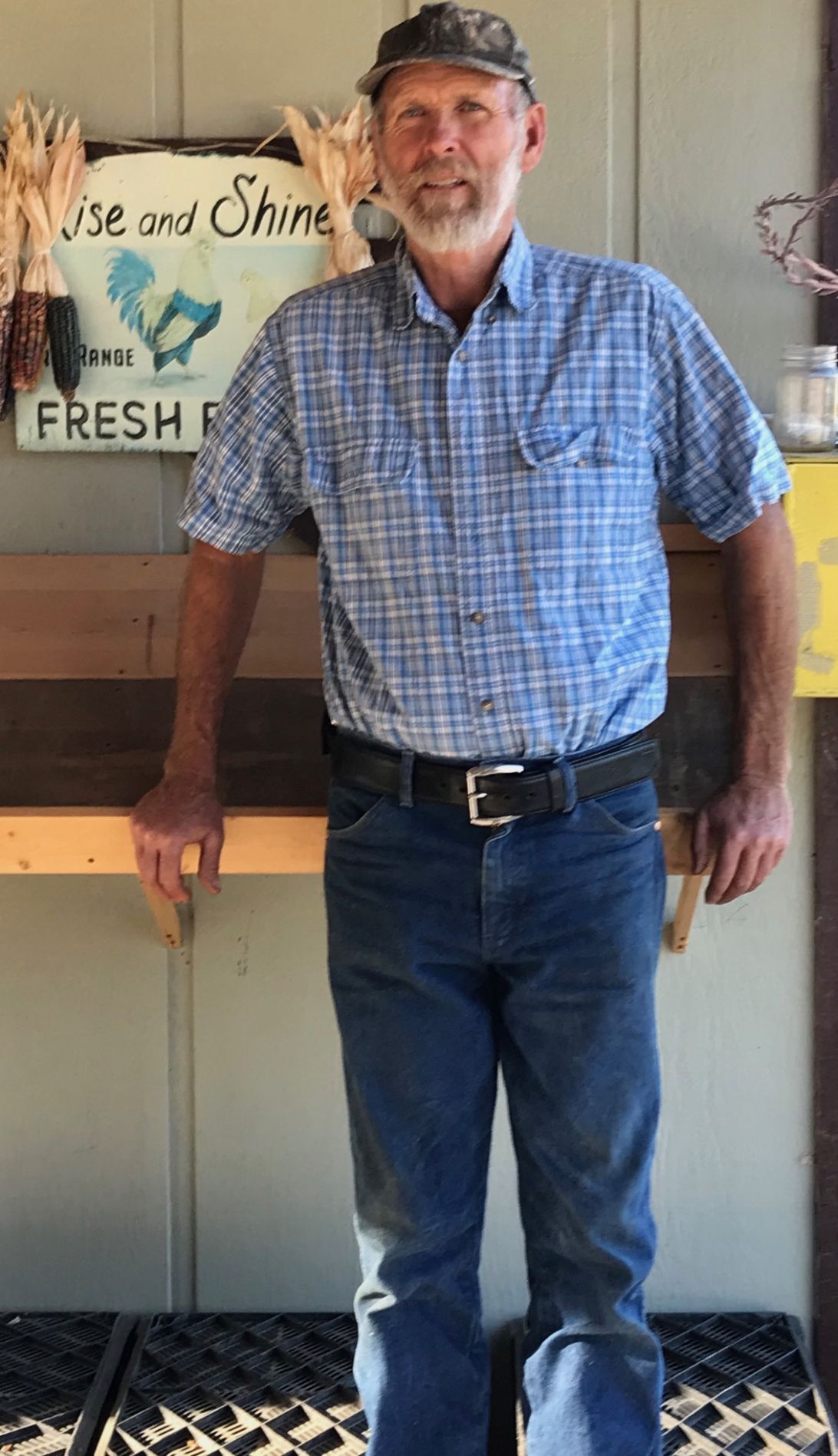 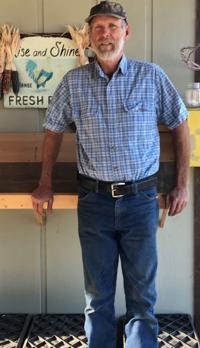 Beekeeper Don Cole stands at his farm located in Goleta. 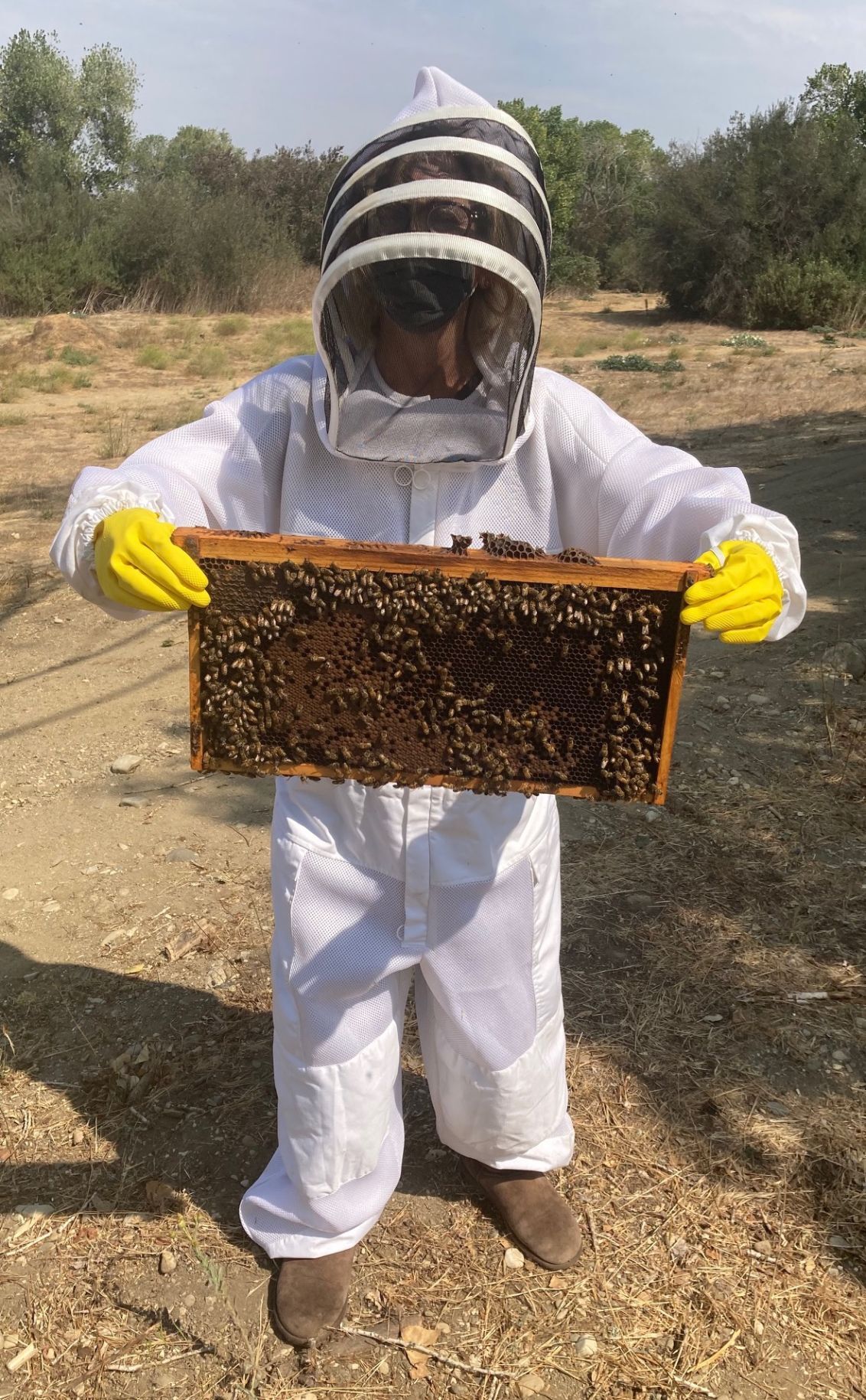 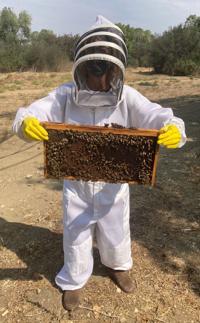 Jamie Edlin wears a bee suit and handles a hive frame that is populated with bees.

Jamie Edlin walks with a smoker through the bee hives at San Marcos Farms Honey Co.

Don Cole, owner of San Marcos Farms Honey Co., opens one of his many bee boxes located in the foothills of Goleta.

A number of beehives tended by Don Cole are located at San Marcos Farms Honey Co. in the foothills of Goleta.

Beekeeper Don Cole stands at his farm located in Goleta.

Jamie Edlin wears a bee suit and handles a hive frame that is populated with bees.

“Honeybees are my thing,” gushed apiarist Don Cole. “I drifted into beekeeping with respect for the bees and for the value of the honey.”

Don’s father, a hobbyist beekeeper, kept hives in Santa Barbara’s San Roque Canyon and introduced Don to bees at an early age, but it was a “bee-man” who taught a class in beekeeping that captivated young Don.

“It was simpler when I started out,” recounted Don. “You could catch a swarm of bees (when the colonies reproduce and subdivide) and put the swarm in a box, go away and forget about it, and later come back to find honey.”

Don rented a house in Santa Barbara with some buddies after high school. He kept some hives in the backyard. Passionate about his bees, he tried to get his roommates interested, but, as Don would say, you either love beekeeping or not.

Don tried his hand at different jobs from farming to carpentry to construction. The jobs paid the bills but felt tedious to Don, and so he kept returning to bees.

“I spent my paychecks on bee boxes and equipment,” said Don. “With the organic food movement in the late '60s, people were becoming very interested in honey and its health benefits.

“Honey isn’t a fad. There’s evidence of bees and honey pots in ancient cave paintings and rock carvings. Bees are mentioned 68 times in the Bible. Honey was used for medicinal purposes and as an alcoholic beverage when fermented. I love history.”

In fact, honeybees are not indigenous to North America. They were brought over from Europe in the 17th century. It was beekeeper Jefferson Archer who brought bees to Santa Barbara County in 1873, and built a successful honey-raising business, demonstrating that the county was particularly conducive to apiculture.

Don armed me with literature on the progression of bees and profile of honey plants in North America. Photos of hives taken 100 years ago appear to be the same hives or bee boxes used today. Credit goes to Reverend Lorenzo Langstroth, considered the “father of modern beekeeping,” who, in 1851, created a box with moveable frames in accordance with “bee space,” a space given certain dimensions that enables bees to pass freely around their nest. If the bee space is too wide, bees will fill the extra space with wax. If too small, they’ll glue it with propolis, a resinous mixture that bees produce as a sealant for unwanted spaces. Bees may not have large brains, but Don tells me that their instincts are brilliant.

Recognizing a demand for locally-caught fresh fish, Travis went commercial and vowed to fish responsibly and treat marine life with respect. His concern was how to operate HAHA Fishing so that he could afford to run his own business.

“Part of what made American beekeeping great was the standardization of the bee box,” explained Don. “That and today’s honey extractors that allow you to put the honeycombs in and extract the honey by centrifugal force without destroying the combs. When done, you put the combs back in the box’s frames, and the bees fill them up again with honey.”

Don and his wife, Ann, run San Marcos Farms Honey Co., a small family-owned business specializing in artisanal bee products. Whereas some apiarists pour their honey into 55-gallon drums and sell them to packers as is, Don is a producer-packer who currently sells his varietal honeys along with bee pollen, beeswax and other bee products at the Santa Barbara and Goleta farmers markets, at local farm stands and at a handful of stores around Santa Barbara County.

My “wow moment” with Don was when he dressed me in a bee suit from head to toe. I followed him to his hives off Santa Rosa Road where he has about 25 pallets, each pallet holding four bee boxes with each box housing one queen and one colony of worker bees. Don lit a smoker, which works as a sedative, calming the bees so that we could open the hives, pull out the frames and watch the bees at work.

I must say that it was a very heady experience as I held a bee-covered frame in my hands while bees whirled around my head. It was truly breathtaking in every sense of the word — the buzzing hum of the bees, their frantic busyness and their intoxicating energy.

Standing in the midst of a community of hives was both intense and giddying, far different than meeting with the honeybees who diligently work the rosemary, lavender and sage blossoms in my yard.

The honeybees I visited with Don were gathering nectar from the surrounding sage plants, producing what will be San Marcos Farms’ Santa Ynez sage blossom honey, a pale golden honey with delicate savory notes.

The colors and flavors of honey vary based on where the bees are gathering their nectar. Don produces a delicious wildflower honey from one site and a sweet orange blossom honey from another spot. Of all the honeys in San Marcos Farms’ collection, it was the honey from avocado flowers that begged me to taste and taste again with its amber color, buttery flavor and rich texture.

Don keeps hives in various locations and moves them around depending on the season. Currently, most of them are in the foothills of Goleta. In February, Don will be moving his hives to several farms and, in particular, to almond orchards where the bees are treasured as pollinators. Renting his bees to farmers, Don also is in the critically important pollination business, which is, as Don put it, “the foundation of agriculture.”

Asked if the honeys are organic, Don chuckled. They are essentially organic but impossible to certify because who can track exactly where the bees are buzzing at any one time? A bee produces only about a half teaspoon of honey in her lifetime, and her lifetime only lasts about six weeks. The bees along with Don work hard for their honeys. (Ouch!)

“You have to be tenacious to be a beekeeper,” said Don as we examined the hives. “I’ve been wiped out. I’ve had bees die. My truck engine quit. Do I throw my hands up and say I’ll get a real job? No! I just use my small truck for a while, scrimp and save, and then get another truck. It’s character-building. You struggle. And you fail. And you pick yourself up and start again. That’s the way of a small beekeeper. Most of my friends are farmers. We get together, and all we talk about is crops and animals. It’s our life. You just keep going. The only thing that’s consistent in farming is change.”

Recipe for roasted carrots with honey

Taking a cue from chef/partner Luca Crestanelli of the newly opened Nella Kitchen & Bar in the Fess Parker Wine Country Inn in Los Olivos, a simple and delicious side dish of roasted carrots with goat cheese and honey:

Preparation: Preheat over to 450 degrees. Peel the carrots. Leave whole if small carrots or cut in pieces if using larger carrots. Spread the carrots out on a large baking sheet. Lightly coat them with EVO, salt and pepper. Toss with fresh sprigs of thyme. Roast for about 10 to 15 minutes or until just tender and slightly charred. Transfer the carrots to a large serving platter. Sprinkle with a bit of honey and a few thyme leaves. Top the dish with crumbled goat cheese. Serve warm or at room temperature. (Serves 4)

Maybe the streets won’t be as full of trick or treaters this year but that’s no reason not to have fun.

Made from common pantry/freezer ingredients, this one can be made on a minute’s notice.