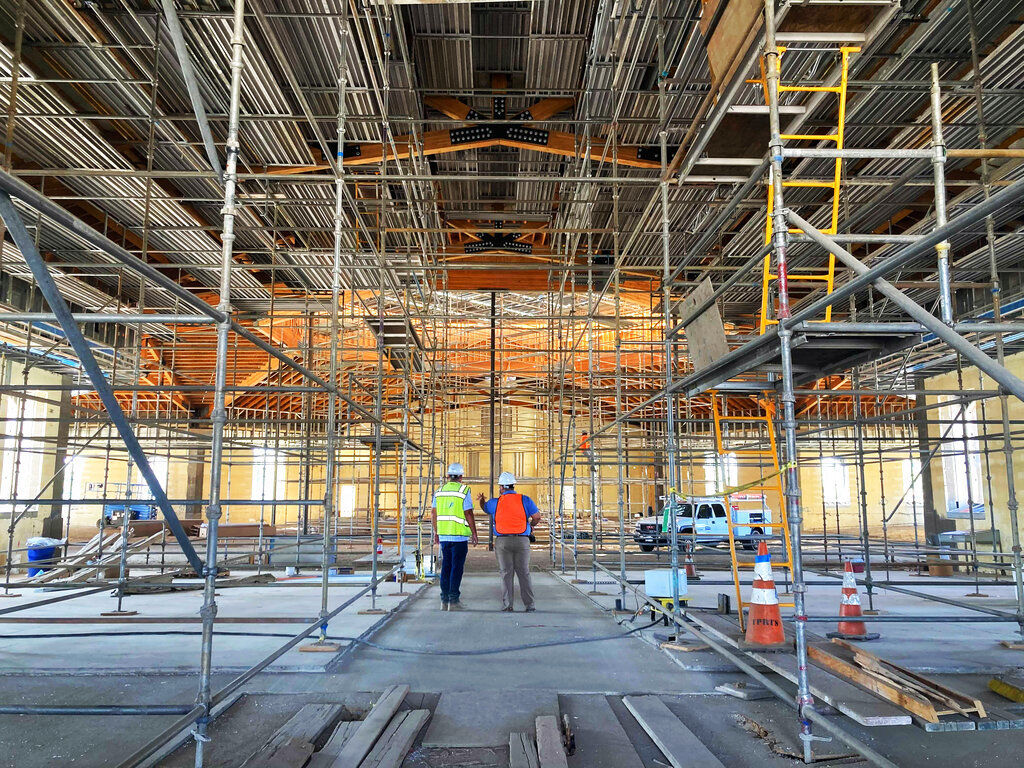 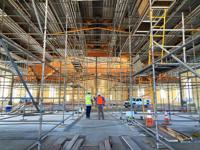 The interior of the St. Charles Borromeo Catholic Church construction site in Visalia, on Thursday, Aug. 26, 2021. 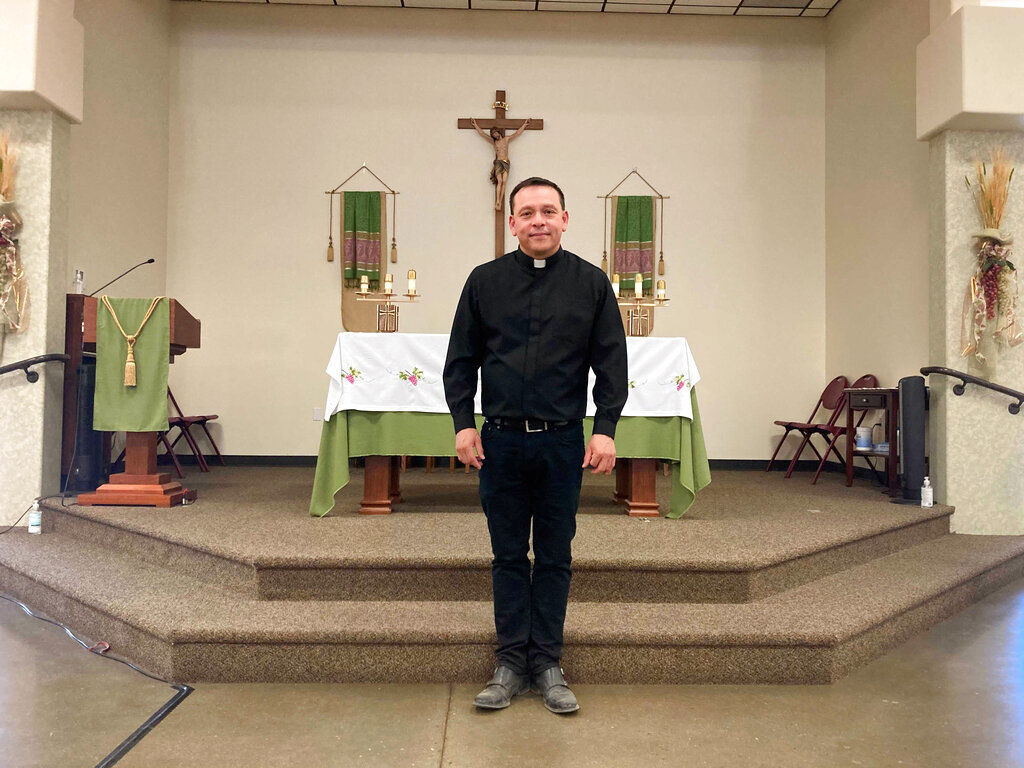 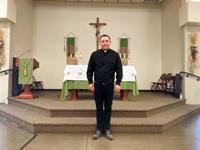 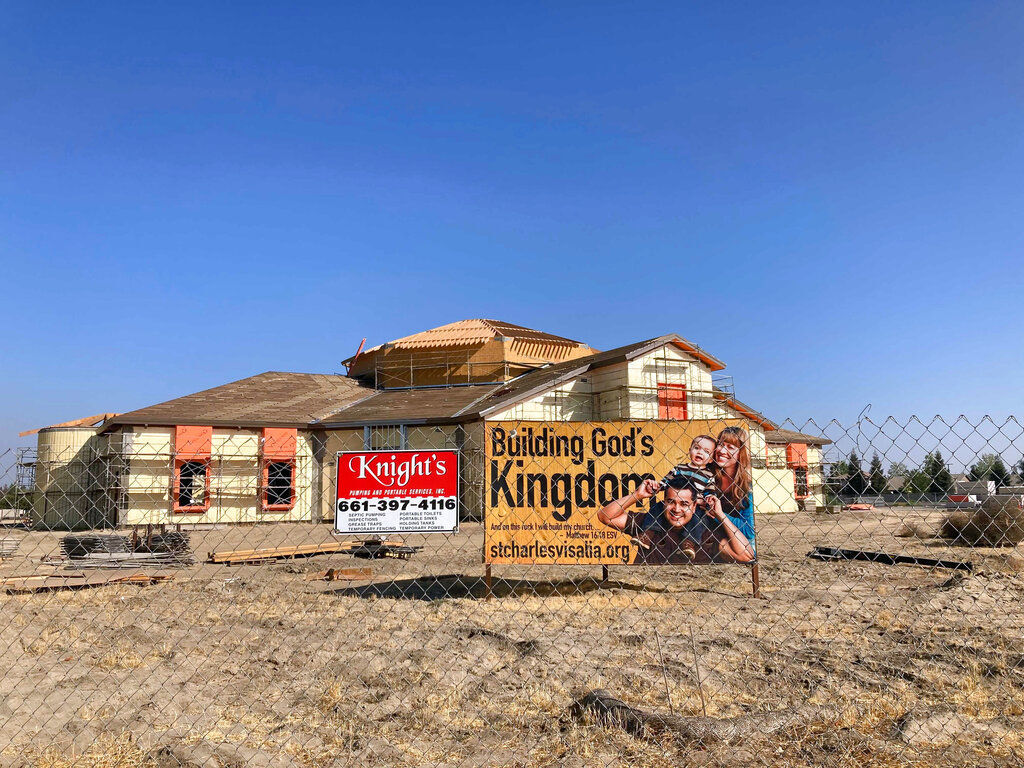 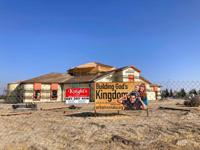 The interior of the St. Charles Borromeo Catholic Church construction site in Visalia, on Thursday, Aug. 26, 2021.

VISALIA — It’s billed as the largest Catholic parish in the United States and it’s being constructed about 200 miles north of Los Angeles, in what’s often referred to “as the heart of California’s dairy industry.”

With an estimated $18.5 million price tag, St. Charles Borromeo Catholic Church will seat 3,200 people, will encompass approximately 33,000 square feet and is expected to open in spring 2022. The church is being built in Visalia, a city in Tulare County, and Catholic leaders there are hailing it as the largest U.S. parish in terms of seating capacity.

The new church — financed by the Roman Catholic Diocese of Fresno and private donations — will feature 9-foot-tall stained glass windows in its sanctuary, a baptismal font at the parish entrance, Stations of the Cross with 14 devotional posts and an octagon-shaped dome highlighted in antique gold featuring murals of the four Evangelists.

The church, which will reflect “California-mission inspired” architecture, will also showcase a 48-foot-high devotional painting on canvas depicting portraits of archangels hovering above as saints kneel and worship the Holy Trinity. The painting will pay homage to the region with images of citrus trees, cattle and green pastures that are synonymous with the agricultural Central Valley.

St. Charles Borromeo will be able to fit more people than the Christ Cathedral — formerly the Crystal Cathedral, Robert H. Schuller’s megachurch taken over by the Roman Catholic Diocese of Orange in 2012 — which can seat 2,248 congregants. And while St. Matthew Catholic Church in Charlotte, North Carolina, may have more than 11,000 registered families, it seats about 2,100 people. The National Shrine in Washington, D.C., seats 3,500 but is not considered a parish church.

To the Rev. Alex Chavez, pastor of Good Shepherd Catholic Parish in Visalia, the new church is a sign of “divine providence,” especially amid the pandemic when “everything is dull and depressing, here in this little part of California we’re building this behemoth.”

Visalia, a city with just over 140,000 people, is wedged between Fresno and Bakersfield in the San Joaquin Valley — a region where, according to U.S. Census Bureau figures, Latinos are the majority in six of its eight counties. The city has experienced population growth over the last decade, with the number of residents increasing from 124,442 in 2010 to 141,384 in 2020, census figures show.

While it may seem jarring for such a massive church to be located in a county where, as a 2017 Visalia Times Delta headline noted, “there’s nearly more cows than people,” Chavez said the large-scale parish — which has been years in the making — is necessary to address the Catholic population boom in a region where, like much of the world, there is a dire shortage of priests.

There’s been an uneven growth of Catholics in the U.S. over the last 40 years as Western and Southern states experienced a boom in the Catholic population, said Jonathon Wiggins, director of parish surveys at the Center for Applied Research in the Apostolate.

“In places like the West and the South, you’re seeing these bigger churches because you have a lot of Catholics there,” Wiggins said. “You have fewer priests than you did 40 years ago, while you are getting more Catholics, so you need bigger venues.”

“What you’re seeing in California is quite a large growth,” he added.

To serve Visalia’s growing congregations with fewer priests, the city’s three churches were consolidated in 2016 into what’s known as Good Shepherd Catholic Parish. A small congregation in nearby Goshen is also part of this umbrella.

Before the pandemic, Chavez — a former engineer who grew up in nearby Porterville — and two other priests would travel from church to church to celebrate 11 Masses in English and Spanish over the weekend. Now, in the wake of COVID-19, Chavez and one other priest host a total of five weekend Mass services on Sundays at a parish hall behind the construction of the new church.

“We were running around like a chicken without our head,” said Chavez, noting the pandemic has allowed them to consolidate Masses in one location at the parish hall.

The consolidation of parishes is happening all around the country, said Scott Thumma, a Hartford Seminary sociologist of religion. The lack of priests is a big reason why, but it also varies by regions, with their own growth or declining rates.

While Western and Southern states have seen a rise in Catholics, some churches in the East and Midwest have experienced dwindling attendance. Thumma said dioceses in those regions may look at a church’s deferred maintenance and necessary repairs and decide it “makes more sense to consolidate.”

The Archdiocese of Chicago this May announced a number of parishes would consolidate amid financial struggles, declining attendance and a shortage of priests. Years earlier, in 2014, the Roman Catholic Archdiocese of New York announced the merging of 112 parishes into 55 new parishes as it experienced similar circumstances.

The idea for a new and bigger church in the region emerged about two decades ago, Chavez said, when then-Bishop John Thomas Steinbock envisioned a geographically central place to gather for celebrations but the diocese’s mother church, St. John’s Cathedral, could only seat 450 people.

Plans for the church began taking shape in 2008, when, according to The Business Journal, the diocese obtained a conditional use permit from the city to build a church, parish hall, school and other buildings on a 17-acre parcel. The parish hall — where congregants currently gather for Sunday Mass — was built, but construction of the church was stalled due to lack of funds. Efforts to build the church resumed in 2017 but suffered a number of delays during the pandemic.

Once St. Charles Borromeo is completed, all Sunday Masses in Visalia and major diocesan celebrations, such as priest ordinations, will be held there. Baptisms, funerals, weddings, confessions and daily Masses will continue to be hosted at the neighborhood parishes. “That’s how we keep them going through the week,” Chavez said.

Across Visalia, construction of the church is “the talk of the town,” Chavez said. But early on, there was some resistance. Some congregants, Chavez said, feared they would lose the identity of their neighborhood church and wanted to keep Sunday Mass at the parish where generations of family had attended. St. Mary’s Catholic Church, for example, is more than 150 years old.

“They want to hold on to what they’re used to, the neighborhood church, and that’s where the resistance is,” Chavez said. “That’s where the difficulty is, letting go.”

But Chavez said it just wouldn’t be feasible to continue the weekend services at each individual church. “One or two of the parishes would be without a pastor,” he said.

Henry Medina, deacon and director of administration of Good Shepherd Catholic Parish, recognizes that parishioners will be transitioning from their smaller community churches to a megachurch that’s not necessarily in their neighborhood. It’s also an opportunity to unite the area’s Catholics, he said.

The new church, Medina said, will be a place where parishioners who are Latino, Portuguese, white, Vietnamese and Filipino as well as farmworkers, farmers, and professionals could gather under one roof.

“You start to see, now, the blending of all the different cultures,” he said. “All these parishes now come under a new identity and what they had in the past is now historic.”

Added Chavez: “Now all the Catholics in the city of Visalia are under one roof united under one God.”