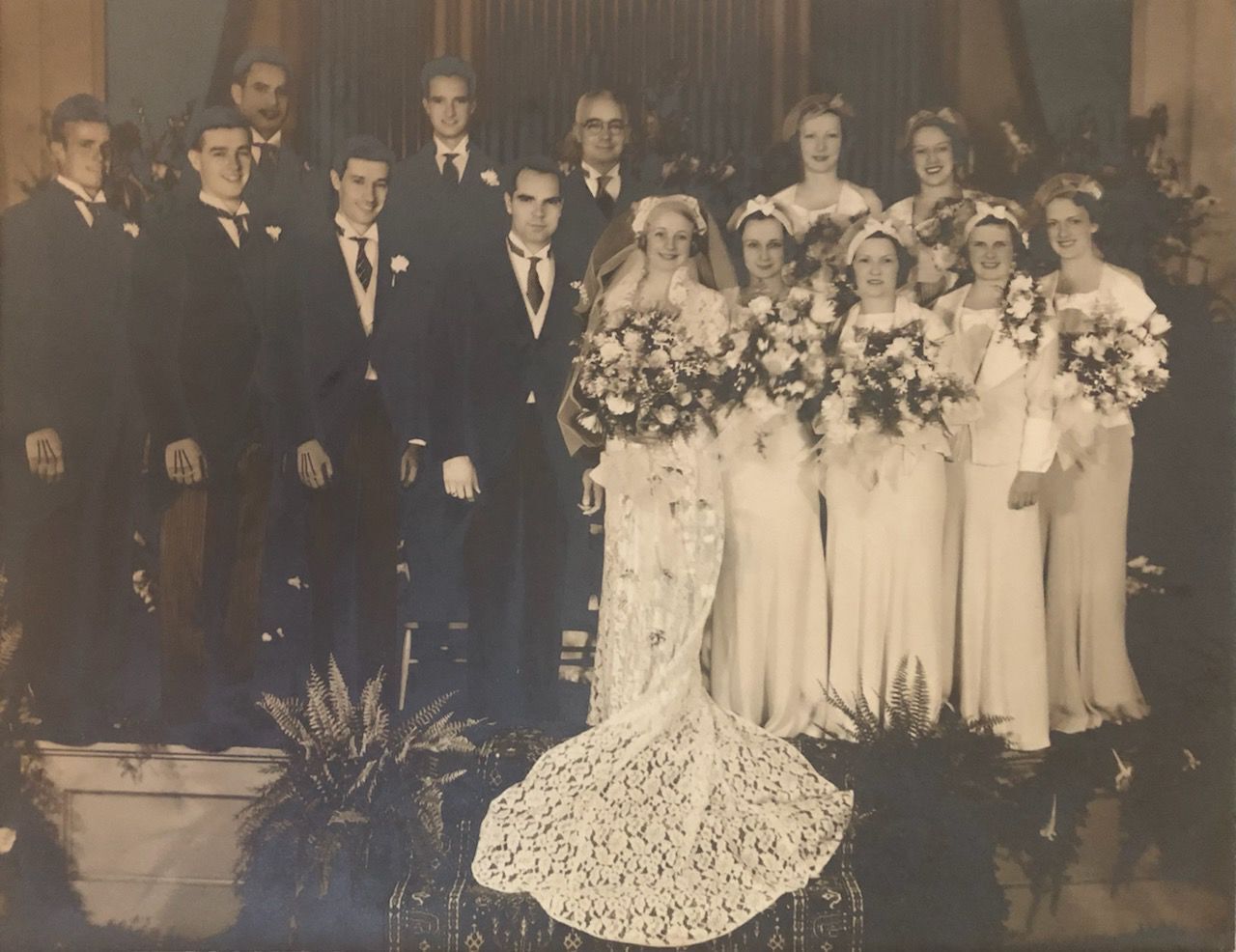 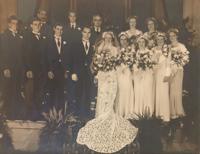 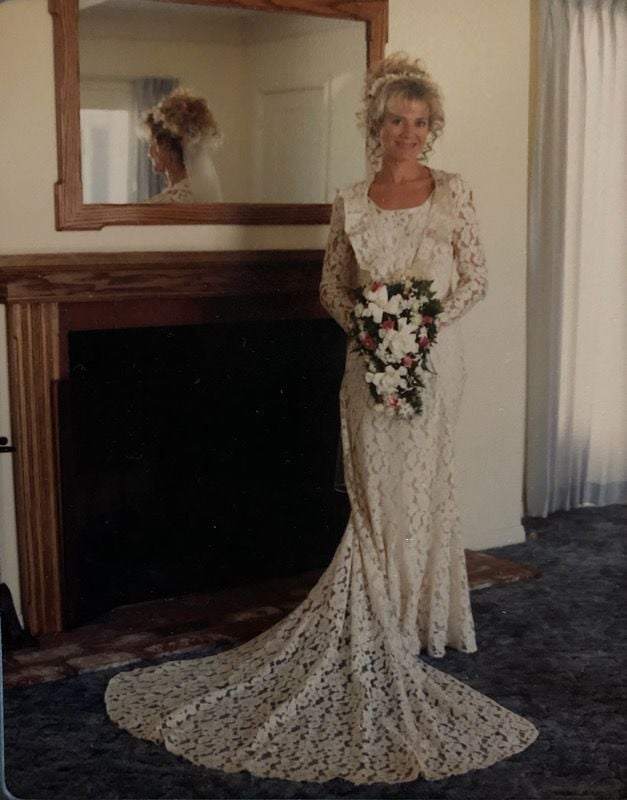 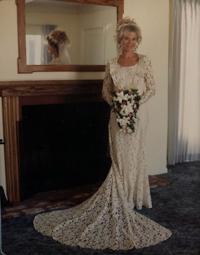 K.C. Thompson poses on her wedding day in 1989, wearing the dress previously worn by original owner Ellen Prince 55 years prior. 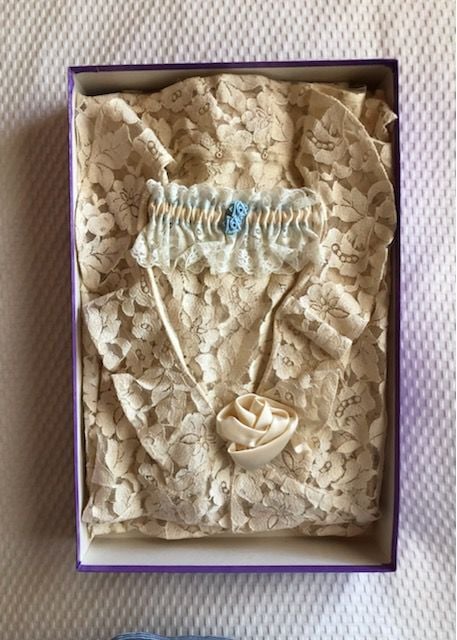 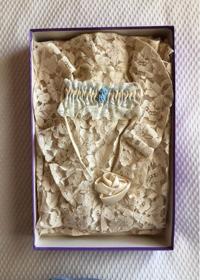 The lace wedding dress worn by Ellen Prince 80 years ago and also worn by K.C. Thompson on her wedding day 32 years ago is carefully boxed to preserve the aging material. 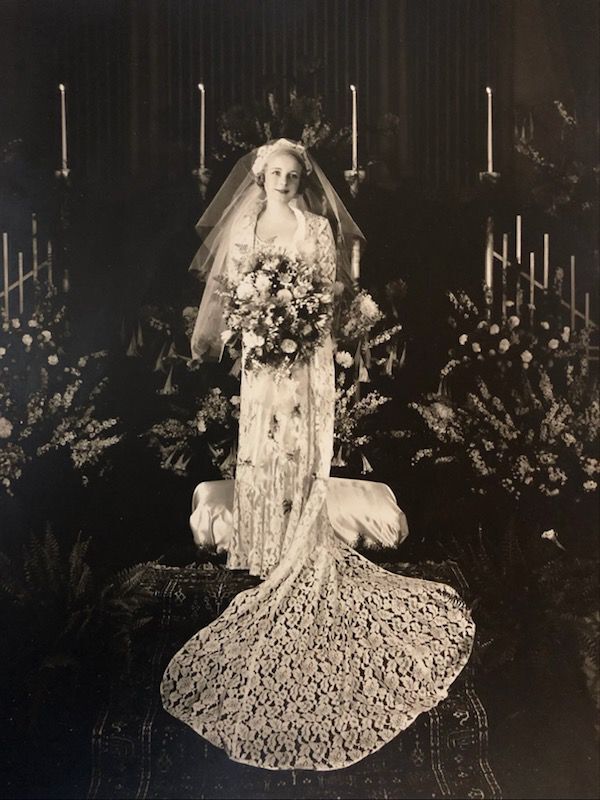 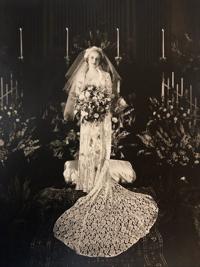 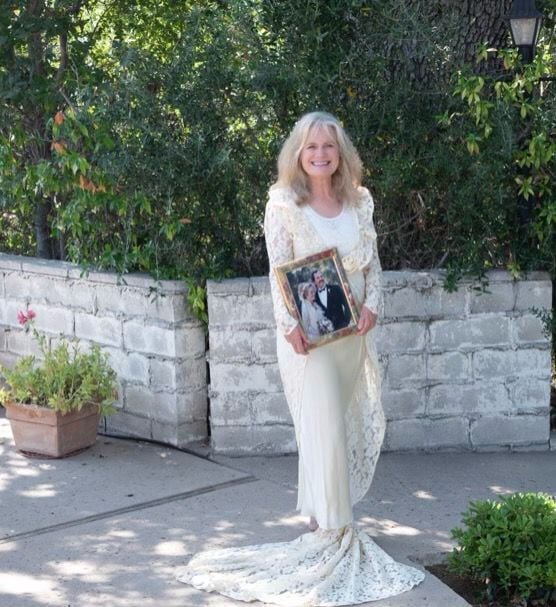 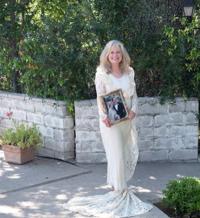 Eighty years later, K.C. Thompson poses in the lace wedding dress she wore on her wedding day 32 years ago that also was worn by its original owner Ellen Prince in 1934. 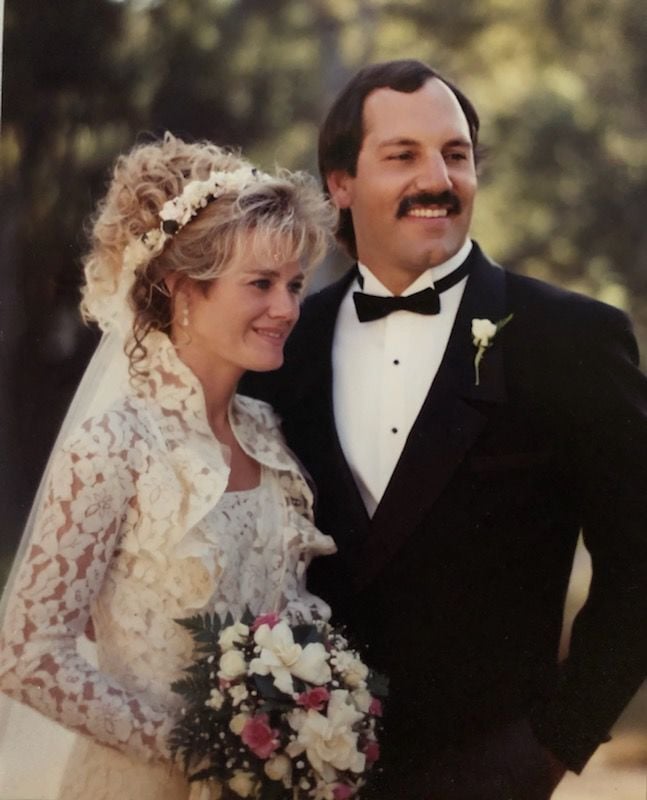 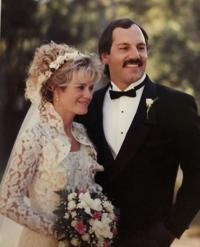 K.C. Thompson and husband Sam Thompson on their wedding day 32 years ago.

Eighty years later, K.C. Thompson poses in the lace wedding dress she wore on her wedding day 32 years ago that also was worn by its original owner Ellen Prince in 1934.

Santa Ynez resident K.C. Thompson recently fitted the 80-year-old wedding dress she wore 32 years ago to marry her now-husband Sam Thompson in 1989. While modeling the dress one last time before the fragile lace and satin started to give way and tear, Thompson was inspired to resurrect her efforts to find the family of Ellen Prince, the original owner.

“I’ve held on to this story for a long time," Thompson said. “I’ve been on a mission to find someone related to Ellen — but that was during the pre-internet years.”

When Thompson began sifting through her trove of music collectible items for reselling, the desire to fully renew the search for Prince’s family was ignited when she came across the carefully boxed wedding dress during a pandemic-driven spring cleaning episode in her attic.

“I couldn’t get it out of my mind,” Thompson recalled. “One day out on a walk, I said to myself, ‘I’m calling the Alpena newspaper.’”

Prince was born in Alpena, Michigan, in the early 1900s before her move to Los Angeles County with her family as a young woman.

Through the town’s local newspaper, Thompson was able to effectively put out feelers that reached amateur genealogist Jayna Huotari in Iron Mountain, Michigan. Thompson credits Huotari as being the key person for locating George Light, Prince’s great-nephew, who currently resides in Illinois.

“A number of people helped,” Thompson said, “but Jayna was the one who turned up phone numbers.”

With just one phone call, Light was not only receptive to the news, Thompson said, but he was moved by her efforts to reunite his great-aunt’s personal belongings — including the 80-year-old wedding dress — with her ancestors.

“George is a hilarious guy and knew a lot about his family,” she said. “I hope to meet him.”

In the ‘80s when Thompson lived the San Fernando Valley and worked in the music industry, her cousin Richard Payton came upon a house where people were clearing out loads of boxes and setting them out on the curb. Payton stopped and asked if the items were for the taking, and was given permission to take away a load.

“Everything was just going into the garbage,” Thompson recalled.

Come to find out, the home had been Prince’s and was being cleared out to be sold after her death. Some of the hauled-away items Payton claimed once belonged to Prince.

No less a time capsule that Payton gifted his cousin, Thompson became the new owner of Prince’s wedding chest. Inside was the three-piece wedding dress comprised of a cream-white satin underslip, a V-neck and V-back lace pull-over ensemble, complete with an old-fashioned long sleeve, beige lace morning coat that buttoned up the wrist and flowed into a 3-foot train, swirling around the bride’s feet.

Thompson tried on the dress and realized it fit like a tailor-made masterpiece.

“I was kind of like, ‘this thing fits me,’” Thompson said. “I wasn’t even dating at the time, so I had a wedding dress long before I had a boyfriend.”

Other contents found within the wedding chest included love letters from Prince’s husband, family photos, a Bible and a pair of beige pumps to accompany the wedding dress Thompson said also fit her like a glove.

After more than 30 years of sporadically attempting to find Prince's family to get her belongings safely home, Thompson said she has now finally put the mystery to rest.

Due to Light's insistence, Thompson still remains the owner of the wedding dress and shoes.

"We had agreed that there was no reason to send him the wedding dress," Thompson said. "Besides, no one would be able to wear it because it's starting to come apart. It's close to 100 years; it's very fragile."

Prince's other family heirlooms have since been returned to Light, "who was very excited to receive them."

“It felt really good to get the items back to someone who had a deep connection to his family,” Thompson said.

Drawing even more parallels between the two brides, Thompson also learned through Light that Prince had graduated from UCSB, located in the same area where Thompson and her husband married 32 years ago and resided for a number of years.

"I've felt her with me this whole time," Thompson said of Prince. "I feel like we're kindred spirits."