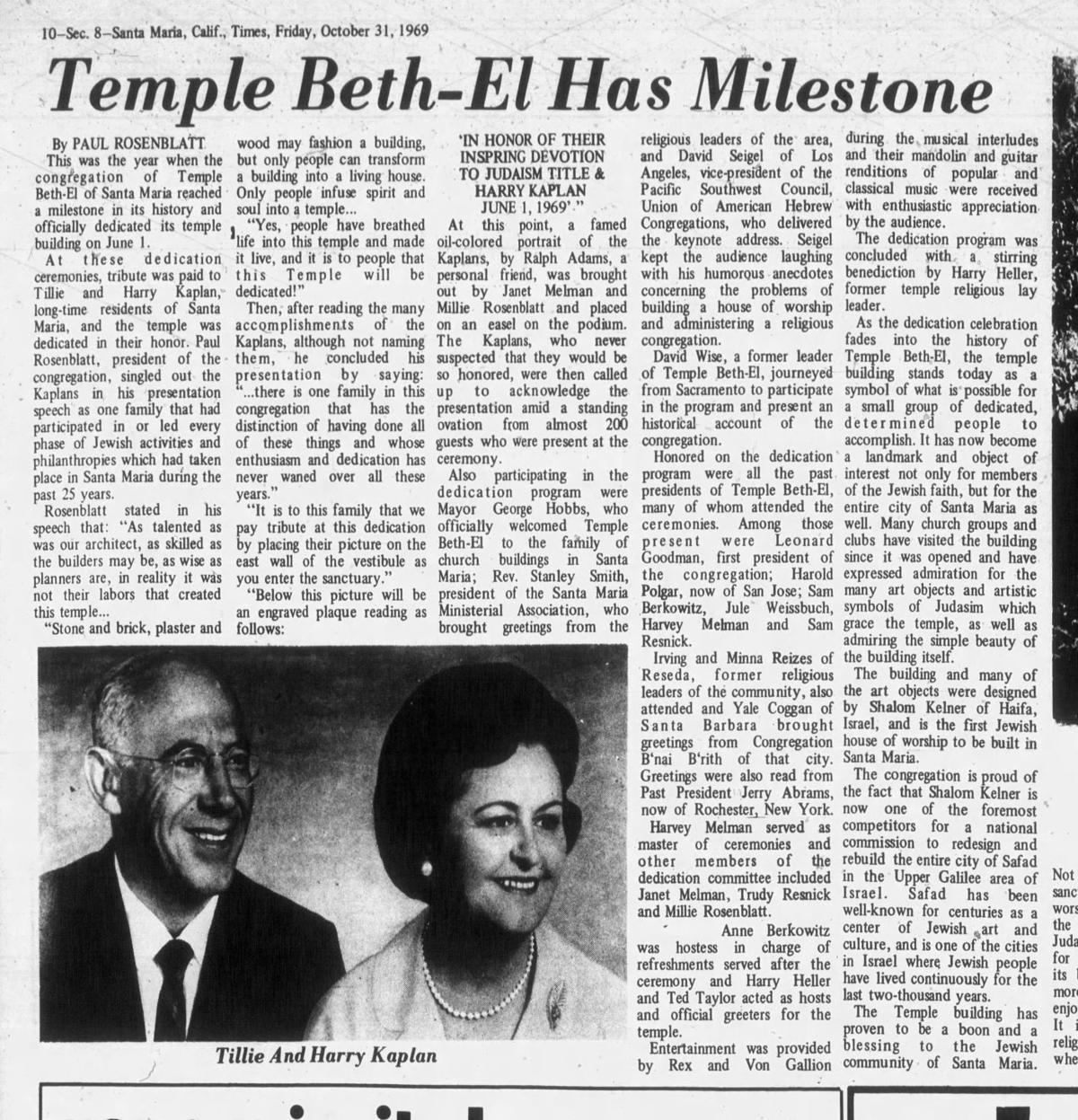 In the Oct. 31, 1969, edition of the Santa Maria Times, the dedication of Temple Beth El in Santa Maria is described. 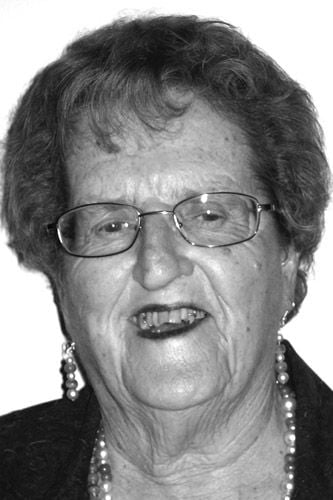 After Camp Cooke became the Vandenberg Air Force Base on Oct. 4, 1958, the area’s population exploded. Many of the newcomers to the base, both military and civilian, were Jewish, and came to Santa Maria for religious exposure. Having no synagogue, the local Jewish families opened their homes where groups met for services.

As the numbers of residents increased, the Jewish communities recognized that something more was needed to satisfy their various religious needs.

Although the Amity Club in Paso Robles was established in 1954 and neighboring towns were invited to attend its functions, it was not enough. Meetings were held every few months until 1955, when another group from Shell Beach and Lompoc decided to form a congregation.

After the Santa Maria congregation was established, holiday services were held in various sites located in the area, but High Holy Days were mostly held at the Methodist Church.

The first fundraising effort was held for the purchase of the Torah.

Twice a month services began in 1960 with a teacher from the Santa Maria School District conducting Sunday school, but in the spring of 1962, two Cal Poly students from Israel took over.

In January of 1961, a committee was appointed to investigate the feasibility of building a Temple.

Per Joseph Krinsky and Tom Geiger, the congregation had received as a gift a small building donated by a non-Jewish builder. Now that they had the building, they needed the Torah.

“The Torah had been bought by one of our group, Elkin Mittleman, and was in our possession. For years, the Torah and the prayer books were kept in the home of the Kaplans. It was quite a moral dilemma. It was decided to build a temple, starting right now, and thus give the Torah a home.”

The 1966-67 years were devoted to the development of plans and starting the construction, with President Harvey Melman spearheading the drive for building funds. Shalom Kelner of Haifa, Israel and a graduate of California State Polytechnic College in San Luis Obispo with a degree in architecture, developed the plans for the projected building.

Ground breaking at the site on East Alvin and North Palisades was held on April 16, 1967, with an open house following at the Melman residence.

Sam and Anne Berkowitz were able to get plumbing supplies and steel donated for the building, while Ben Evans did the actual plumbing work.

Raising money for the cause became a community endeavor as both Jewish and non-Jewish people stepped up to the plate to help.

The work of the Sisterhood of Temple Beth El became legendary throughout the state, with a Rabbi from Los Angeles once calling the group a “Do it yourself Sisterhood Temple.” Even San Luis Obispo’s Hadassah come down to one of the Sisterhood’s luncheons just to see what they were doing to make it so successful.

In recognition of Joe Davis’ generosity, the Board of Directors voted to dedicate the library in his name.

A loan of $30,000, co-signed by Sam Berkowitz, Harry Kaplan and Sam Resnick, came from the Bank of America at 6.25 percent interest.

The new Temple, a prime example of what a small group of dedicated people who are willing to work, opened (although not fully completed) in time for the High Holy Days on Oct. 4, 1967.

In the words of Temple President Paul Rosenblatt at the dedication service held in April of 1969:

“Here is a temple which will take its place of honor among the other houses of worship in Santa Maria, and will speak to the society of men in the affirmation of faith. We have taken a parcel of earth and made it hallowed ground; we have used common space and transformed it into a holy sanctuary. This affirms that man’s role is not to destroy, but to build; not to profane, but to sanctify.”

In addition to its regular services, the Temple is reaching out to its congregation (and non-members) offering many activities which are sure to perk up the interest of everyone.

Here is a copy of a letter that I received after writing a previous article about Temple Beth El.

“As one who grew up in Santa Maria and the Jewish community, I assure you that it was a beautiful experience.

“We had many Israel students who were attending Cal Pol who were instrumental to the life of the Santa Maria Jewish community during its early days and later.

“Shalom Kelner was instrumental in designing a Synagogue that was functional, affordable and beautiful. Shalom was very close with an artist who lived in the Monterey area. Shalom worked with the artist to design and build the beautiful doors to the Synagogue as well as the Ner Tamid (everlasting light) over the Ark of the Covenant. Shalom now lives in a beautiful suburb of Tel Aviv known as Hod Hasharon.

“Ori Gruber was instrumental in providing the plans for the air-conditioning system for the new Synagogue. Ori and his wife Ella helped me learn my Torah portion in preparation for my Bar Mitzvah.

“During the mid-1960s, all of our classes were held at the Santa Maria Airport, and later at the Methodist Church. My Bar Mitzvah of 1965 was held at the DES Hall as the Synagogue had yet to be built. Ori and Ella now live in another very upscale suburb of Savyon , outside Tel Aviv.

“Jack and Leah Shapiro, who taught Hebrew and Jewish history at our Sunday school in Santa Maria, are now living in an area of northern Israel, known as Carmiel. Jack’s architectural company just began building a new university in the ancient city of Tzfat where several thousand Jewish, Moslem and Christian students from the surrounding areas will be able to study law.

“The Santa Maria Jewish Community Center’s Synagogue demonstrates what the cooperation from many groups of people can do when they work together. Without the Methodist Church, we would not have had a place to study. Each year, during the Santa Barbara County Fair, the Jewish community would volunteer to work the booth on Sunday for the Church of the LDS, thus allowing us to raise additional money for the building of a Synagogue. Prior to holding classes at the Methodist Church, we also held classes in the upstairs classroom in an old hanger at the Santa Maria Airport.

“I am very proud to have been a part of the history of the Santa Maria Jewish Community and Synagogue.

“Thank you for reminding me of a very important part of my life.”

Shirley Contreras: Major P. Baker was a mover and shaker in Santa Maria

Born in Petaluma on Oct. 5, 1861, Major P. Baker moved to Santa Maria in June of 1883 where he became involved in business as well as in commu…

In the Oct. 31, 1969, edition of the Santa Maria Times, the dedication of Temple Beth El in Santa Maria is described.