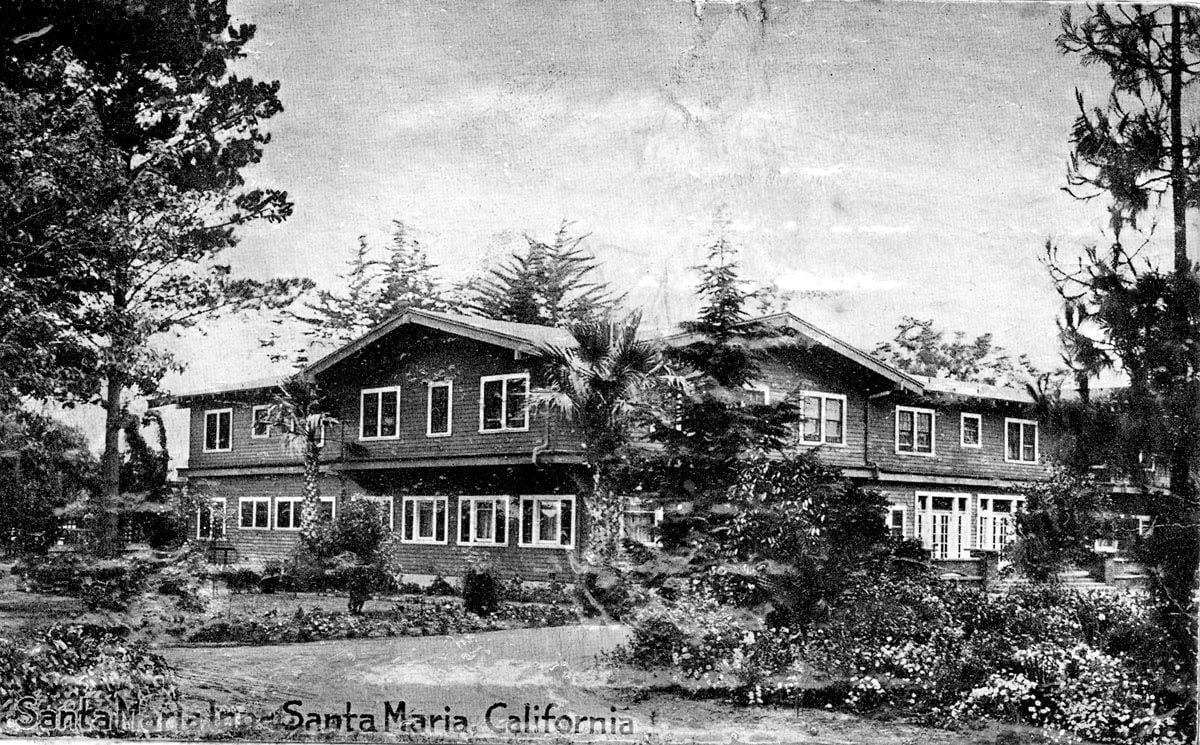 On Nov. 5, 1923, Los Angeles Illustrated News quoted Cornelius Vanderbilt as saying that the Santa Maria Inn was “by far the best little hotel in the West.” The Santa Maria Inn opened in 1917. This photo was taken in 1923. 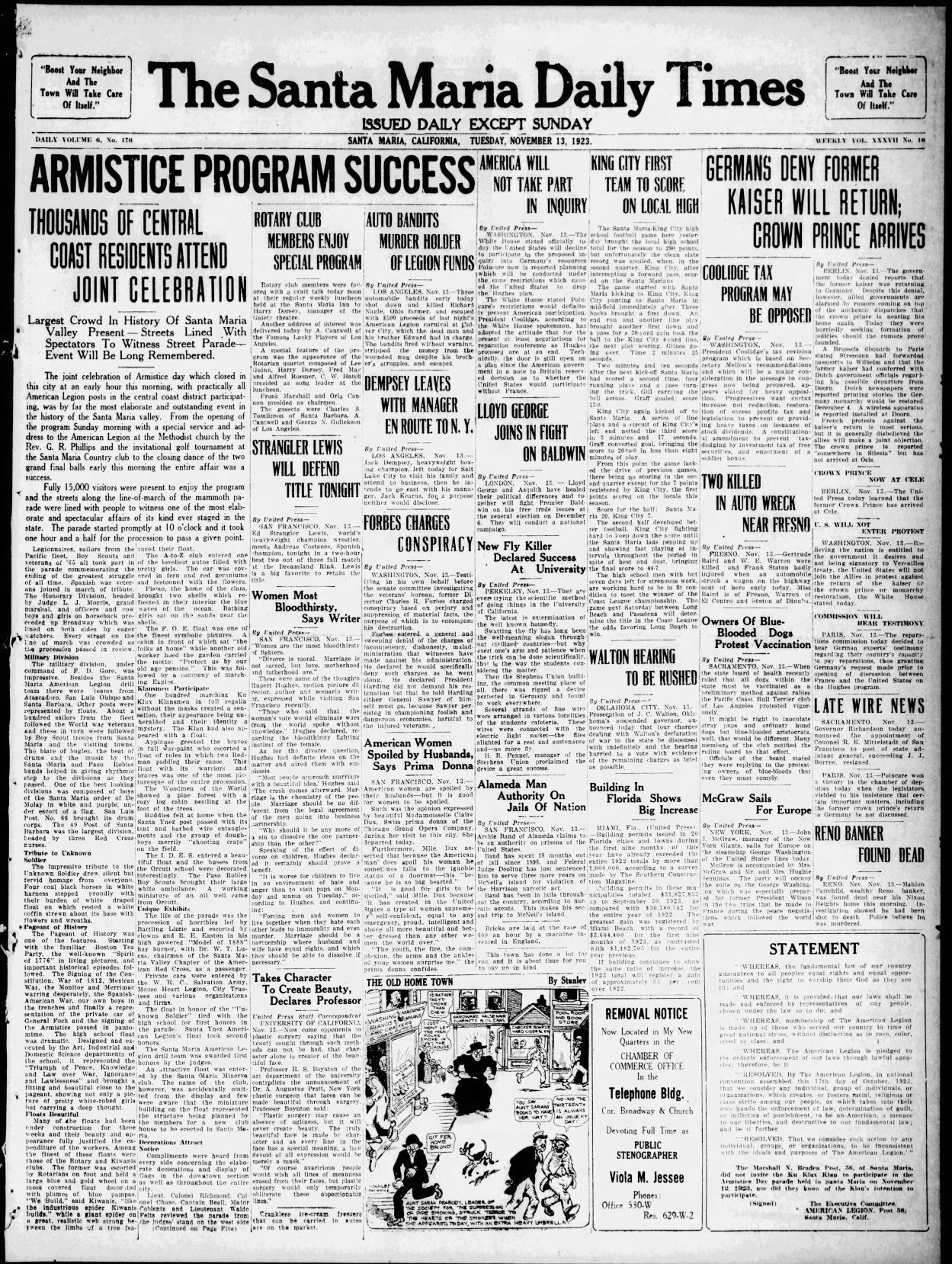 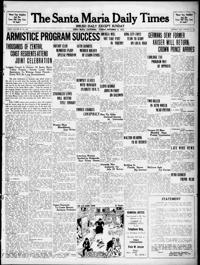 The American Legion released a statement on the participation of the Ku Klux Klan in the 1923 Armistice Day Parade. The statement can be found in the bottom right corner.

November 1868: John Prell built the first house in what was to become Central City and, later, Santa Maria.

November 1871: Theodore LeRoy filed a subdivision map of Rancho Guadalupe and set aside LeRoy Park for the use and enjoyment of the town’s inhabitants.

Nov. 2, 1917: Postal rates increased to 3 cents, except for those letters delivered by rural city or other carrier which carried the rate of 2 cents. Postcards containing written messages sold for 2 cents.

Nov. 28, 1921: The new two-story wooden dormitory for children of Japanese field workers was recognized as the Japanese Children’s Home of Guadalupe.

Nov. 5, 1923: Los Angeles Illustrated News quoted Cornelius Vanderbilt as saying that the Santa Maria Inn was “by far the best little hotel in the West.”

Nov. 11, 1923: About 15,000 spectators turned out to watch the parade commemorating the signing of the armistice, an event that had taken place five years earlier. About 100 Ku Klux Klansmen, dressed in full regalia, joined the marchers.

Nov. 14, 1929: The Rotary Club, Kiwanis, Minerva Club, American Legion Auxiliary and others joined together for a one-day Red Cross drive in the Bradley Hotel.

November 1934: Mayor Marion Rice presided over the first City Council meeting held in the new City Hall after the building’s completion in September of the same year.

November 1934: A seven-year restoration project began on the La Purisima Mission by the Civilian Conservation Corps. Union Oil and the Catholic Church had donated most of the land for the mission’s restoration.

Nov. 22, 1939: Ground was broken for the 35-bed Our Lady of Perpetual Help Hospital. The hospital, better known as Sisters’ Hospital, was located at 125 Airport Drive (now College Drive).

Nov. 15, 1940: Construction began on the 37,000-acre Camp Roberts, said to have been the largest training base in the country during World War II. The camp was named in honor of 19-year-old Medal of Honor recipient Cpl. Harold Roberts, who lost his life in France while valiantly trying to save others.

Nov. 27, 1947: The Santa Maria Redskins beat the Hemet Tahquetz Packers 7-6 when George Galleson, who had never played in a game before, caught a 35-yard pass in the end zone to tie the game. Franke Reis kicked the extra point. Jim Gamble served as general manager throughout the club’s seven-year existence.

Nov. 24, 1958: The Orcutt Mineral Society was formed with 21 members signing the charter.

Nov. 7, 1960: The City Council adopted a resolution to proceed with the condemnation of three lots on the corner of Broadway and East Main Street. This led to the eventual destruction of Whiskey Row.

Nov. 11, 1973: The flagpole, which had formerly stood at the intersection of Main and Broadway, was designated as a Santa Maria city landmark. The flagpole currently stands in front of City Hall.

Nov. 14, 1976: The Rev. Anthony Runtz, then pastor of St. Louis de Montfort Church, agreed to resume the celebration of Sunday Mass at the San Ramon Chapel.

November 1978: The county split measure went down to defeat.

Nov. 7, 1990: The explosion that caused the total destruction of a gas station and garage on Guadalupe Street in Guadalupe was caused by a vapor in a lantern igniting when the welder lit his torch to repair the fixture. In addition to both the welder and his assistant being killed in the explosion, there was much damage throughout the town. The Basque House, formerly the Commercial Hotel, was closed and has yet to be reopened.

November 1996: Thirty-five years after the town of Betteravia came to an end, Union Sugar began tearing down the company’s remaining buildings, thereby closing an important chapter of Santa Maria’s history.