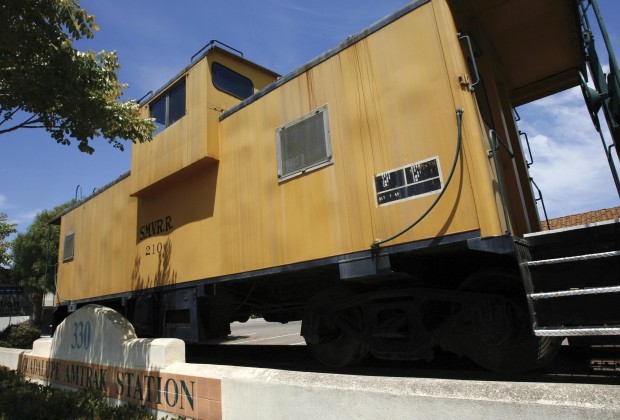 A yellow caboose sits at the Guadalupe Amtrak station. The caboose marked number 210 once ran on the Santa Maria Valley Railroad. 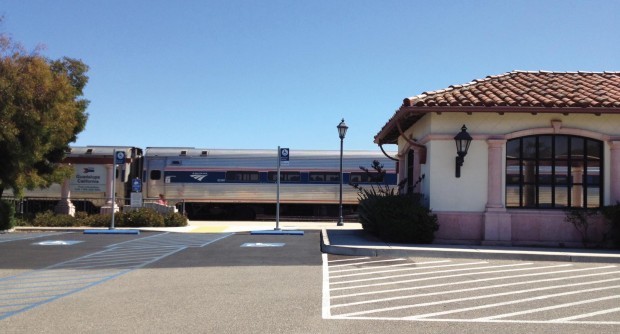 An Amtrak train rolls into the Guadalupe station Monday afternoon.

It’s not Union Station, but the pretty, single-story Spanish-style structure with a red-tiled roof is the railroad hub for Guadalupe — and technically for Santa Maria, nine miles east, which has no passenger train service.

The station, on Guadalupe Street (Highway 1) a third of a mile north of Main Street (Highway 166), is unstaffed. Enclosed on three sides, the fourth side is open, facing east to the railroad’s six tracks. Inside the beamed structure are three concrete benches and a kiosk to buy tickets.

Amtrak’s premier streamliner, the Coast Starlight which runs from Los Angeles to Seattle, whizzes through in the afternoon both north- and southbound. Neither stops.

In the station parking lot is a somewhat incongruous sight alongside the city’s main street — a yellow caboose. The caboose, marked number 210, once ran on the Santa Maria Valley Railroad and was bought by the Guadalupe Chamber of Commerce for $2,500, John Perry, local businessman and historian, recalled in 2009. It was originally planned for use as a chamber of commerce office.

“But it would have been too small,” Perry said. “We thought, ‘Well, let’s put it right in front of the depot.’”

Today the 50-year-old caboose, which had been purchased by the SMVRR in 1962 from a Vermont railroad, is a tourist attraction. Sightseers may climb a few stairs at either end of the 30-foot car and peer in through windows in the doors at old tables, benches, a pot-bellied stove and elevated cupola. It’s a look at Americana past.

Roadside Attractions is a weekly chronicle of sights along the Central Coast’s highways and byways. This feature first ran July 21, 2009. Sally Cappon can be reached at sjcappon@aol.com.

A yellow caboose sits at the Guadalupe Amtrak station. The caboose marked number 210 once ran on the Santa Maria Valley Railroad.

An Amtrak train rolls into the Guadalupe station Monday afternoon.