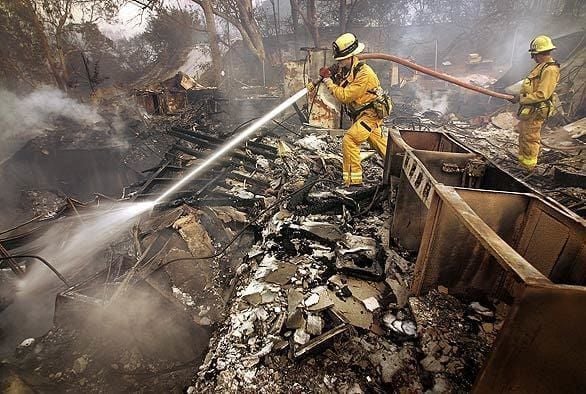 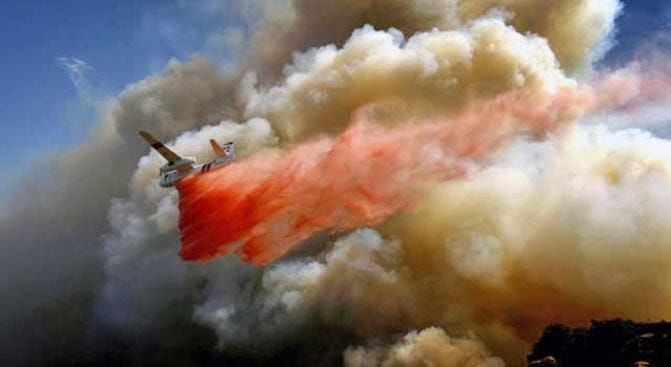 However, we are not out of the woods (no pun intended), as four of our worst fires have started in the months of October, November and December. With all the hot weather we have had and no rain in months, we are still in danger.

Gap fire, July 2008: The fire was started on July 1 by a 16-year-old boy near rock formations at Lizard’s Mouth off West Camino Cielo, west of Highway 154.

When firefighters arrived, the blaze had spread less than a quarter of an acre and was nearly extinguished before a sudden wind gust caused the fire to spread rapidly toward Goleta.

Nearly 200 personnel accompanied by helicopters and bulldozers were sent out to fight the flames and began evacuations of La Patera and Glen Annie canyons. By the second day, only a few hundred acres had burned, and the fire seemed to be coming under control until dry brush and another Sundowner winds fueled 100-foot-high flames.

By the third day, the fire had burned 2,000 acres and was threatening Goleta.

Power lines were burned and 150,000 people from Isla Vista to Montecito lost power. A state of emergency was declared, and mandatory evacuations were ordered from West Camino Cielo to Cathedral Oaks between Fairview and Patterson. The Haney Tract, Kinevan Ranch, Hidden Valley and San Marcos Trout Club were also evacuated.

By July 4, 5,500 acres had burned and 800 firefighters along with 20 airplanes were desperately trying to save hundreds of homes along North Fairview Ave. By evening, the fire was advancing on three fronts: northward toward Camino Cielo, east toward Highway 154 and west toward downtown Goleta.

By the next day, July 5, the fire had burned 8,300 acres with 2,500 firefighters trying to keep the fire from Goleta. They were successful and favorable weather pushed the fire west toward Gaviota, not south toward Goleta.

The fire burned in the hills until July 28 and burned a total of 10,000 acres. Firefighters credited the agricultural barrier of green avocado orchards and irrigated farms surrounding Goleta with saving the town.

Due to the heroic efforts of firefighters, only four structures were burned, and no one was killed.

Tea fire, November 2009: The Tea fire was started by an abandoned bonfire that a group of college students thought they had put out the night before after partying at the Mar Y Cel Estate’s historic “Tea House” in Montecito.

High winds stirred up the embers and the fire spread rapidly down the Santa Ynez Mountains into Santa Barbara. The fire was brought under control within four days, however it burned 1,940 acres and 210 homes in Santa Barbara and Montecito.

At Westmont College, the physics lab, psychology building, math building, 15 faculty homes and two residence halls were destroyed. Fortunately, Westmont had emergency plans in place, so 800 students and staff were evacuated to the fireproof, concrete gymnasium. The fire burned within 10 feet of the gym, but the structure held, and all were safe.

The Tea fire is a perfect example of how important it is to make sure bonfires and campfires are totally put out before leaving them. If possible, the best way is to thoroughly douse them with water and cover them with dirt.

Jesusita fire, May 2009: The Jesusita fire was started by sparks from a metal blade on a weed whacker that was being used to clear brush and grass from the Jesusita Trail just below Cathedral Peak in the mountains above Santa Barbara.

It cost $35 million to fight the fire and 30 firefighters were injured, three of whom required hospitalization for second- and third-degree burns. Fortunately, no one was killed and once again without the heroic efforts of the firefighters, more homes would have burned. One of many tragedies of the fire was that much of the Santa Barbara Botanic Garden was destroyed.

A lesson learned from this fire was that if people are in remote areas using equipment that could cause a spark during hot, windy weather, bring a fire extinguisher along.

La Brea fire, August 2009: The La Brea fire broke out in the San Rafael Wilderness in the Los Padres National Forest approximately 23 miles east of Santa Maria. A propane stove at an illegal marijuana plantation inside the National Forest is believed to have caused the fire.

The plantation had 30,000 marijuana plants, worth an estimated $90 million. (Prior to the La Brea fire, 17 other plantations hidden in the forest had been discovered by authorities, who destroyed more than 225,000 marijuana plants worth over $675 million.) The fire burned 91,622 acres over 14 days, mostly in remote wilderness.

Investigators are looking for the cause of a wildfire that broke out about 2:50 p.m. Wednesday in the 5600 block of Armour Ranch Road in Santa…

More than 1,600 firefighters were assigned to the blaze, including 39 engines, 49 hand crews, 19 bulldozers, 11 helicopters and several fixed-wing aircraft dropping fire retardant. Highway 166 remained open, but the public was urged to use caution when traveling due to emergency vehicles and congestion.

Fire crews were able to save the Manzana School House located at the junction of Manzana Creek and the Sisquoc River. The school, a Santa Barbara County Historic Landmark, was built in 1893 and at the time served about 200 people living on 20 homesteads in the area.

Gibraltar fire, October 2015: Although small in size, burning less than 30 acres, the Gibraltar fire had the potential to be a disaster. It was intentionally set by an unknown person along the Cold Spring Trail near Camino Cielo west of Montecito Peak at 5:16 a.m. on Oct. 29.

The arsonist chose well, as the forecast was for hot dry weather with Sundowner winds that would have driven the fire down into populated areas of Montecito. The Montecito and Santa Barbara County Fire departments jumped on the threat immediately. Within a couple of hours, there were six air tankers, eight helicopters, 35 engines, three bulldozers, four water tankers and four hand crews fighting the fire. A helicopter base was set up at Santa Ynez Airport. The helicopters were needed as gusty winds and tight canyons made it impossible for fixed-wing aircraft to drop fire retardant in some areas.

Roads were closed from East Camino Cielo at Painted Cave Road to Gibraltar Road and West Mountain Drive at Gibraltar Road. Fortunately, the fire was put out in one day and there were no injuries or damaged structures. However, it was a narrow escape for the thousands of people who lived in the path of the Sundowner winds that developed that evening.

My next and last article in this series will cover fires from the Sherpa fire in June 2016 to the Thomas fire in December 2017. Unfortunately, these fires were huge, burning a combined total of 369,090 acres and destroying or damaging 1,400 structures.

I hope before my next article is published there are no additions. Santa Barbara County has not had a major fire this year, but our fire season is far from over. The 2017 Thomas fire that was so devastating happened in December. Be careful out there and stay safe.

22 stories about the Central Coast's history, landscape, and traditions from Judith Dale

More in 22 stories about the Central Coast's history, landscape, and traditions from Judith Dale (8 of 22)

22 stories about the Central Coast's history, landscape, and traditions from Judith Dale