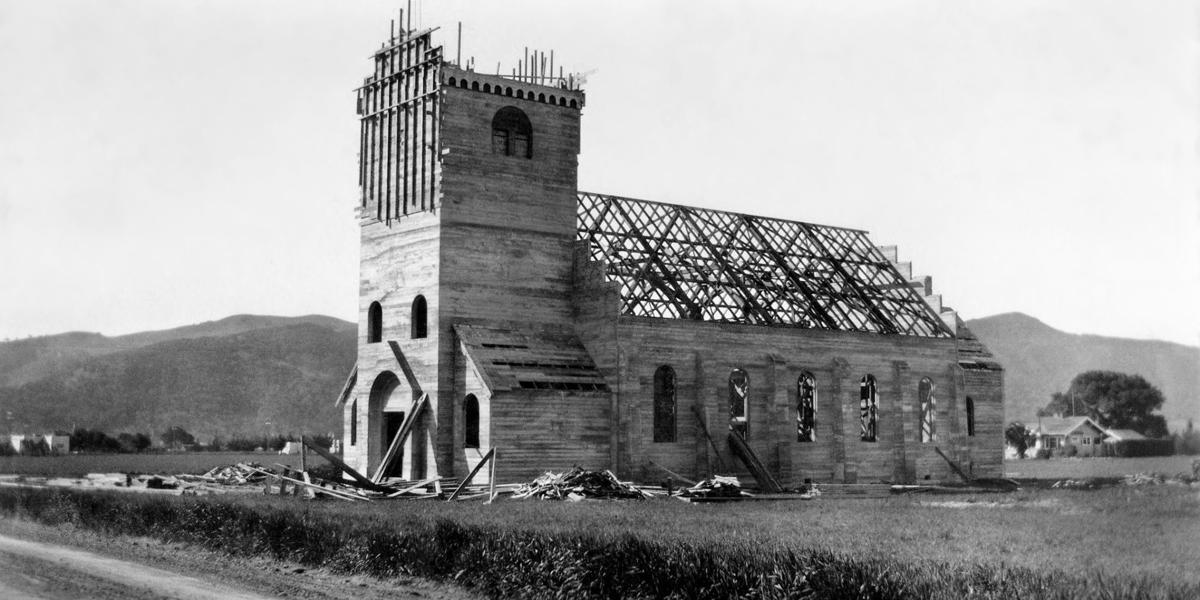 Bethania being built: The founders' plan for Solvang included a Danish Lutheran church. Although the congregation was formed in 1912, it wasn’t until 1928 that a church building was completed. Based on traditional churches of Denmark, it was the first Danish style building in Solvang. 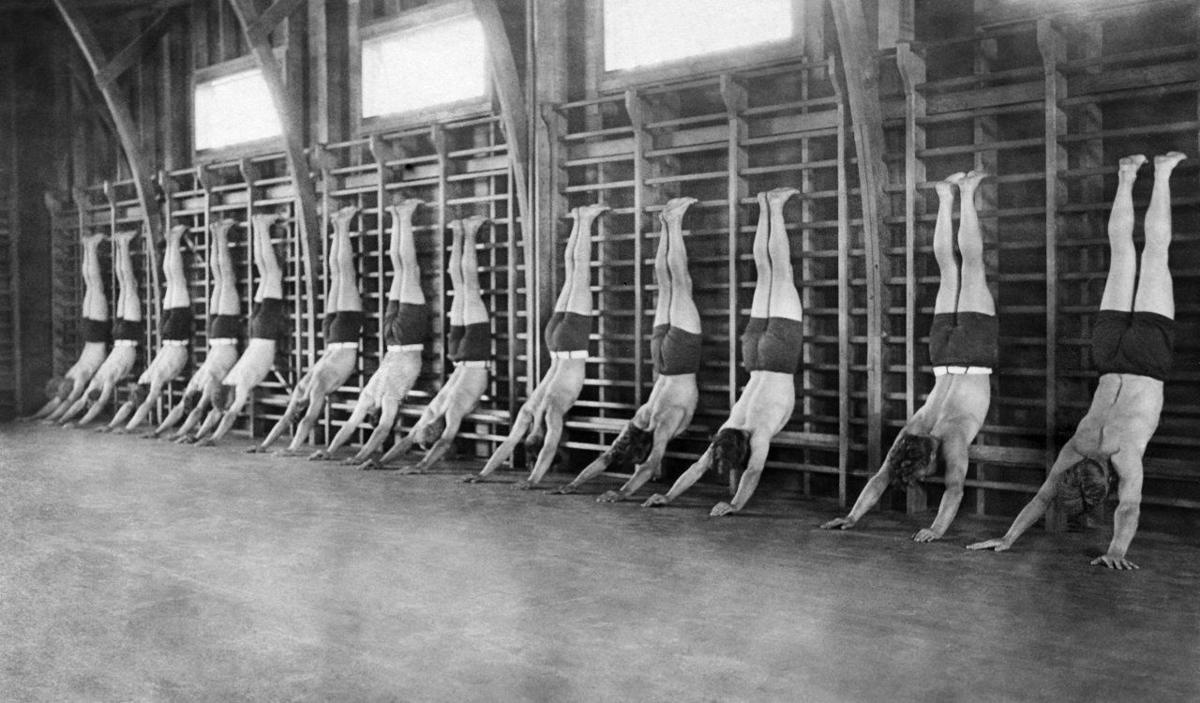 Men’s gymnastics were a vital part of the curriculum at Atterdag College. The ideal was “a sound mind in a sound body.” A new gym was built in 1922 and heavily used. 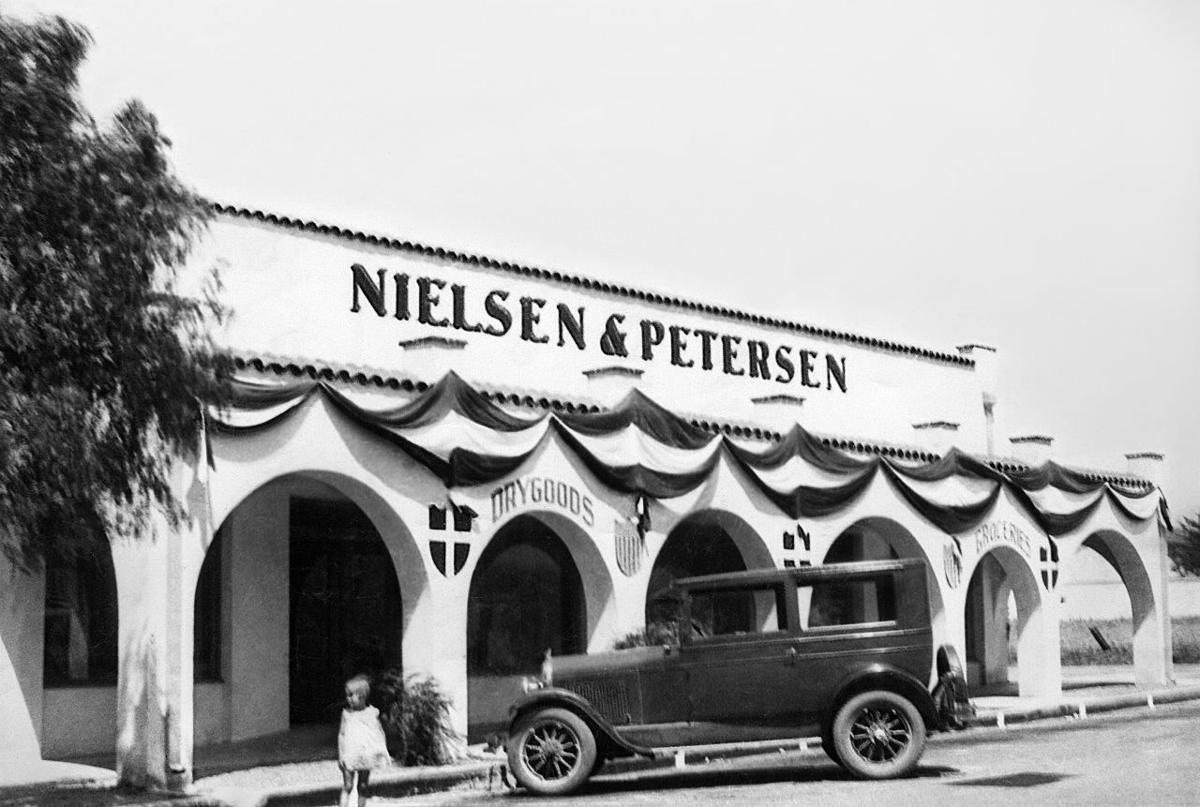 The arches, patterned after those at Mission Santa Inés, were added to store fronts on the north side of Main Street (now Copenhagen Drive) in 1926. 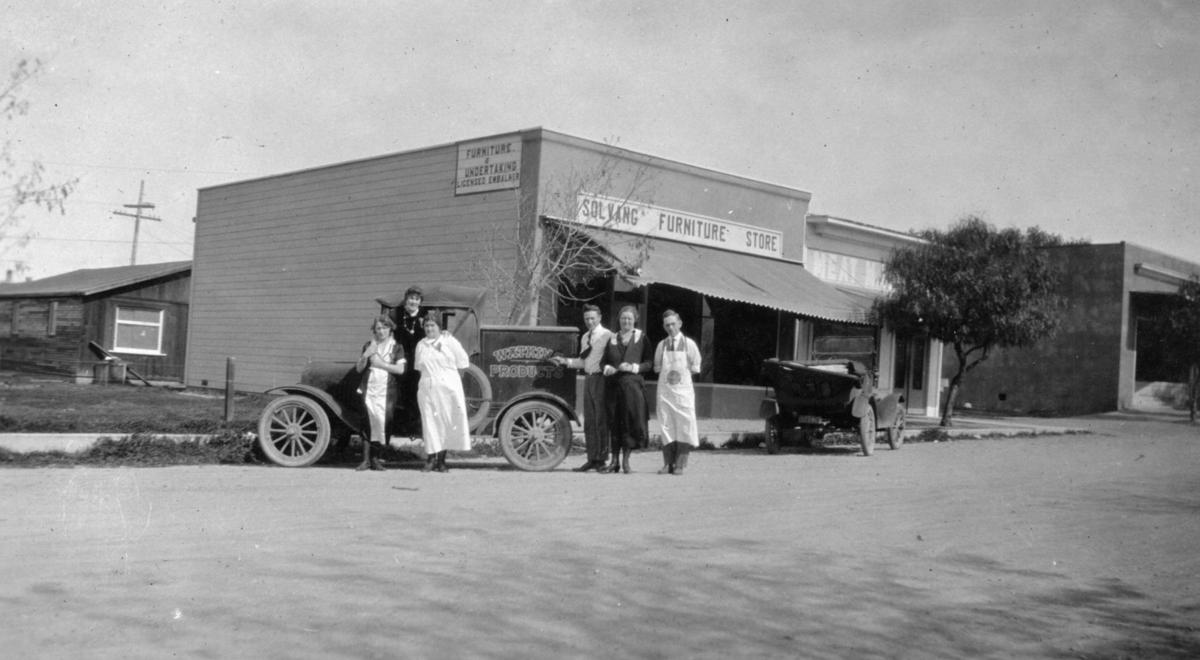 Solvang Furniture Store: By 1920, Solvang’s population was 406 and the demand for businesses grew. Termann Paaske’s furniture and undertaking business on Main Street provided an essential service. 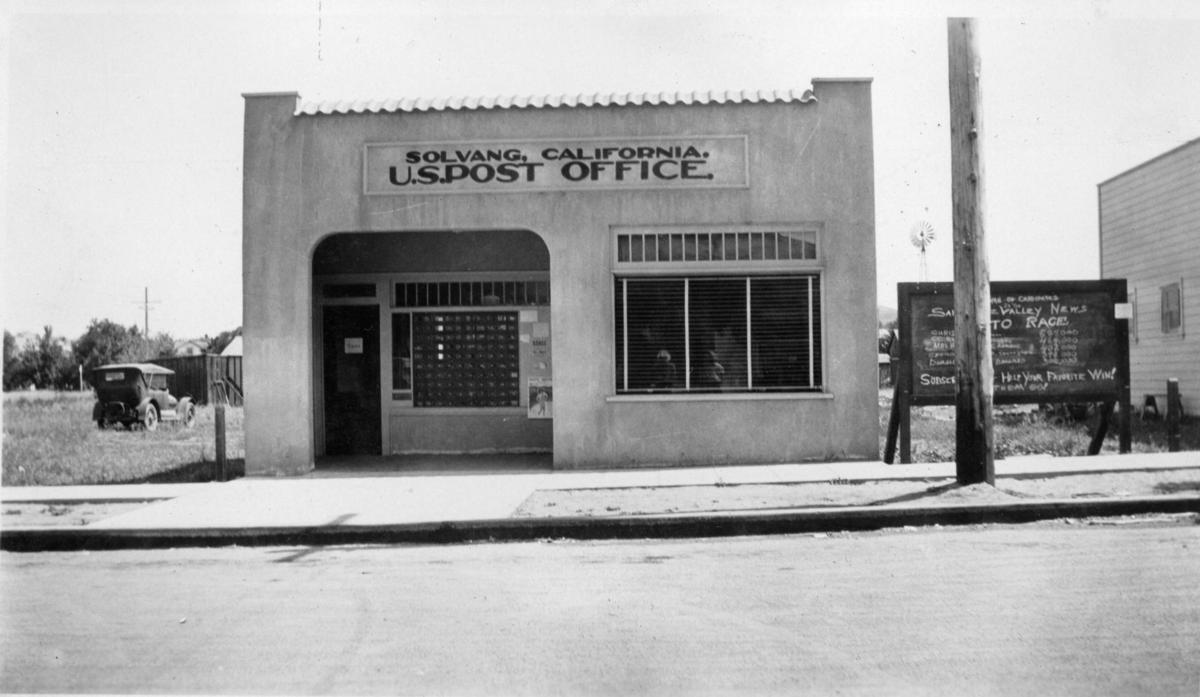 Solvang view from Alisal Hills, circa 1920

In 1910, three Danish men incorporated the “Danish American Colony” (DAC) and decided to look for a location to establish a Danish community in the western U.S. After searching sites in Washington, Oregon and California, they chose the Santa Ynez Valley for the same reason that the Spanish chose the location for the Santa Inez Mission in 1804: a good source of water (the Santa Ynez River), good climate and good farmland.

In 1911, Pastor Benedict Nordentoft, Pastor Jen Moller Gregersen, and Professor Peder Pedersen Hornsyld signed an agreement to purchase an 8,882-acre parcel of the Mexican land grant Rancho San Carlos de Jonata for $338,000. The land had been sold by Rufus T. Buell in 1877 to the Santa Barbara Land and Water Company to pay off his debts.

The founders’ goal was to establish a Danish community with a folk school and church, where the Danish language, culture, and arts could thrive. They came up with the name “Solvang” which means sunny field in Danish. To sell lots and entice Danes to move to the area, they advertised in all the Danish-American newspapers. Land prices varied from $25 to $130 per acre.

On Nov.15, 1911, the founders opened the Danish-American folk school that was to become the education and cultural center of the new community. The folk school was for Danes to continue their education after their mandatory education ended at age 14.

The folk school was different than the American high schools and colleges: There were no exams, grades or diplomas, but instead lectures and group discussions on moral and social issues. The emphasis was on enlightenment and independent intellectual thought. Philosophy, history, geography, literature, mathematics, languages, art and music were all part of the lecture and discussion curriculum.

Danish youth and young adults from all over the U.S. came to Solvang to attend the folk school.

By 1915, a larger school was built and was named Atterdag College, meaning “Tomorrow there is a new day.” Gymnastics, folk dance and a healthy lifestyle were part of the college and community activities. Picnic hikes up Fredensborg Canyon and to Nojoqui Falls were popular activities.

The folk school remained the educational and cultural center of the community until 1937 when its last classes were taught.

The Atterdag campus continued to be a central part of the community by hosting events and youth summer camps under the leadership of Viggo and Cora Turnow.

Times change and the Atterdag building became a home for seniors operated by Bethania Lutheran Church. The building was demolished in 1970, replaced by the Lutheran Home which became a continuing-care retirement community.

In 2009, its name changed to Atterdag Village of Solvang in honor of its history.

Within four months a hotel was established to house and feed new arrivals while their homes were being built.

Later that year, Sophus Olsen opened the first retail business in Solvang – a general store in which he partnered with grocer D.D. Davis of Los Olivos.

In 1912 Marcus Nielsen bought out Davis and in 1914 bought out Olsen. (Nielsen’s Market continued in the family until 2019 – a 107-year run. It was tied with the Solvang Post Office and Solvang Library for the honor of being the longest continuously operating businesses in Solvang.)

Since early settlers were predominately single men, a pool hall that offered a bath, a shave, a cigar, and good beer was established in 1912 by Peder Madsen. It was one of the most popular new businesses in town. More new businesses continued to be added.

10 years in the making: Co-authors of historical book 'The Spirit of Solvang' discuss process, collaboration

In 1913, the Solvang Garage was built to provide a machine shop and service for the few people who had automobiles. The first bank, Santa Ynez Valley Bank, also opened that year. Since many new residents came from a diary background, many new settlers established dairies and creameries.

Mission Bakery built around 1914 was the first of many bakeries in town which helped to establish Solvang as the place to get great baked goods.

By 1920, Solvang’s population was 420 residents. Not all of the 8,882 acres had sold, and some had to be returned to the Santa Barbara Land and Water Company due to the fact that the founders refused to sell land to non-Danish people. However, 5,828 acres of the original purchase were sold, securing the future of the Danish community.

With the arrival of electricity and the automobile as well as the hard work and “can do” spirit of the new Danish settlers, the town continued to grow in the 1920s.

The heart of the town was laid out very similar to today. Many businesses had located on Main Street (today’s Copenhagen Drive) and Gaviota Road (today’s Alisal Road). Most of the residences were built along the Lompoc Road, which is today’s Mission Drive (Highway 246).

Architecturally, until 1927, Solvang looked like any other small town in the western United States. Most stores had wood frame construction and Western-style false fronts. In 1926 the rounded arcade on Main Street (Copenhagen Drive) was added – a nod to the neighboring Santa Inez Mission.

The first truly “Danish” building was Bethania Lutheran Church which was built in 1927. It was styled after traditional rural churches in Denmark. The church existed from the beginning as the town fathers envisioned the community having three pillars: home, school, and church.

Before 1927, the church was very active, but lacked the money to build its own facility. The congregation met in various places, mainly in the folk school. Bethania was completed in July 1928 at a cost of $15,311. Along with Atterdag College, Bethania became the focal point of the community. With the completion of the church building, the goals of the town’s founders were now complete.

A special thanks to the Elverhoj Museum for providing many of the historical facts for this article.

Also, the museum has just published a new book, The Spirit of Solvang – a History of the Danish Capital of America, which gives a great account of the history of Solvang. It can be purchased at the museum and I highly recommend it.

In order to stay in business in the late 1920s the shopkeepers had to learn to speak English. Even Bethania started delivering some of its sermons in English. The community was becoming more Americanized and many of the young people welcomed this as they wanted to be American Danes, not just Danes.

Solvang – The Danish Capital of America

By the 1930s, Solvang had become the largest town in the Santa Ynez Valley. It had businesses to meet every need – not just grocery stores and bakeries. Lumberyards, blacksmith shop, bank, movie theater, drugstore, meat market, feed stores and car dealerships all were added to serve the growing population.

However, by the late 1940s town leaders knew Solvang was losing its economic momentum. Jobs were available only in agriculture and small retail shops. Many young people were moving out of the area due to lack of job opportunities.

The idea of tourism was born to keep Solvang growing. Businesses began to remodel their storefronts in the Danish style and windmills were added.

In 1947, the Saturday Evening Post magazine wrote an article about the Danish community of Solvang. The title of the article was “Little Denmark”. The article gave Solvang instant popularity as the magazine was in almost every American home.

The rest is history – Solvang became the Danish Capital of America. Due in no small part to the vision and dedication of its business community, Solvang has been successful in building its rich history and cultural heritage into a popular year-around tourist destination.

In addition, it is a great place to live.

Series: Judith Dale takes a look at the history of education in the Santa Ynez Valley

“Once you learn how to run one business successfully, you can pretty much run any business."

The free community event which celebrates the spirit of Albert Einstein and the playful convergence of science, creativity and craft, is open to explorers of all ages.

Suzan Hamilton-Todd's five-week European adventure was canceled due to travel restrictions put in place during the coronavirus pandemic.

Bethania being built: The founders' plan for Solvang included a Danish Lutheran church. Although the congregation was formed in 1912, it wasn’t until 1928 that a church building was completed. Based on traditional churches of Denmark, it was the first Danish style building in Solvang.

Men’s gymnastics were a vital part of the curriculum at Atterdag College. The ideal was “a sound mind in a sound body.” A new gym was built in 1922 and heavily used.

The arches, patterned after those at Mission Santa Inés, were added to store fronts on the north side of Main Street (now Copenhagen Drive) in 1926.

Solvang Furniture Store: By 1920, Solvang’s population was 406 and the demand for businesses grew. Termann Paaske’s furniture and undertaking business on Main Street provided an essential service.

Solvang view from Alisal Hills, circa 1920 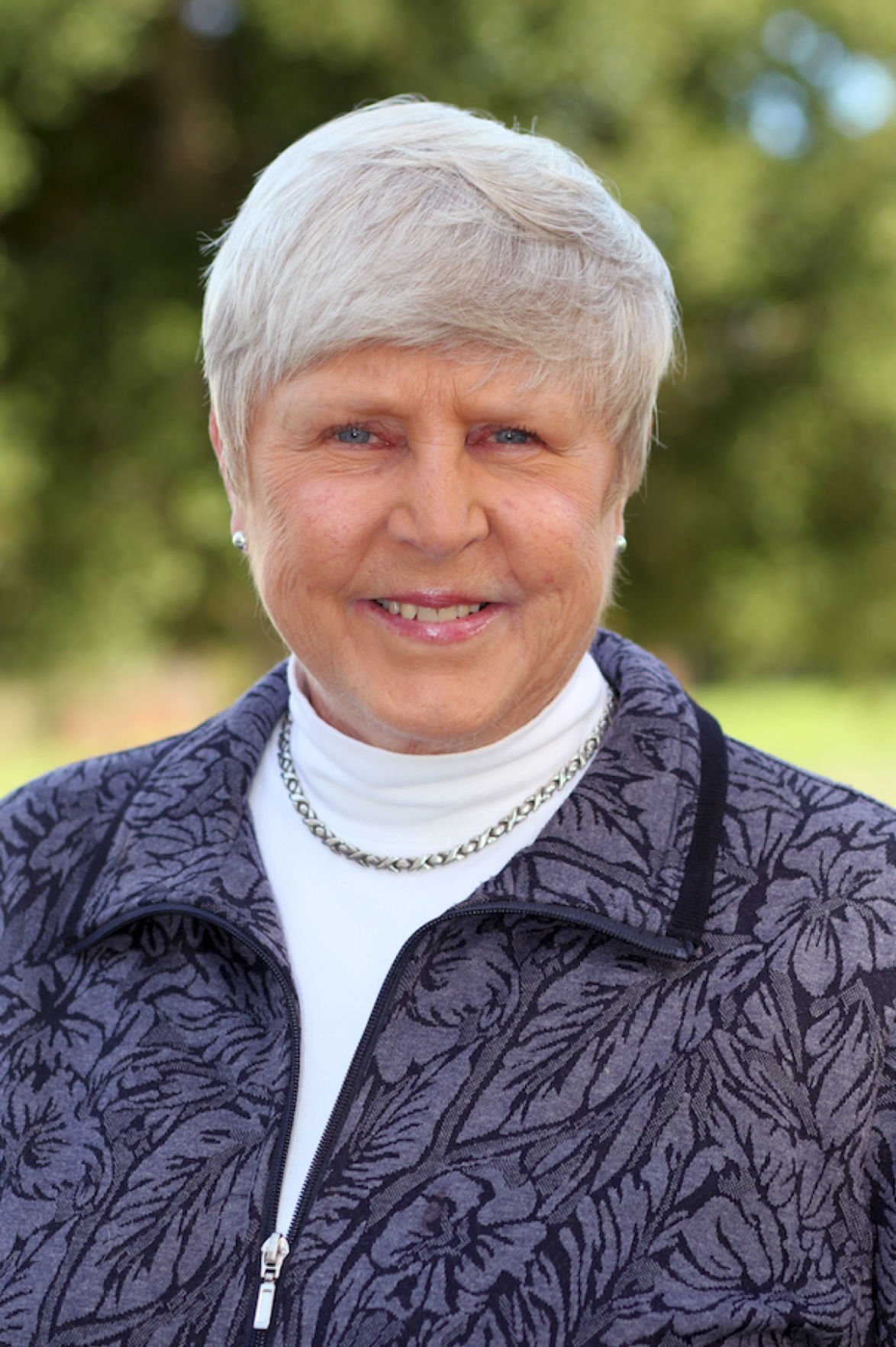