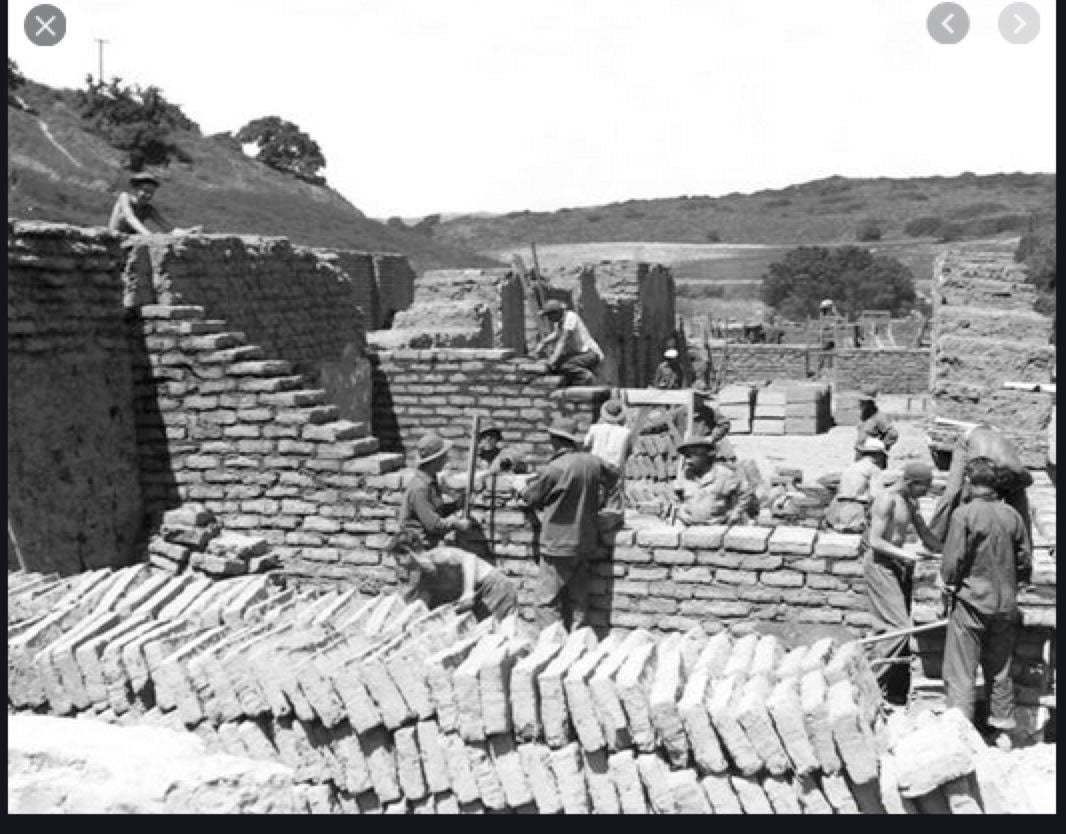 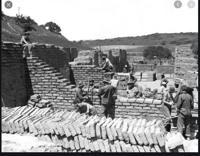 The Civilian Conservation Corps and the National Park Service work to fully restore the mission, circa 1934. 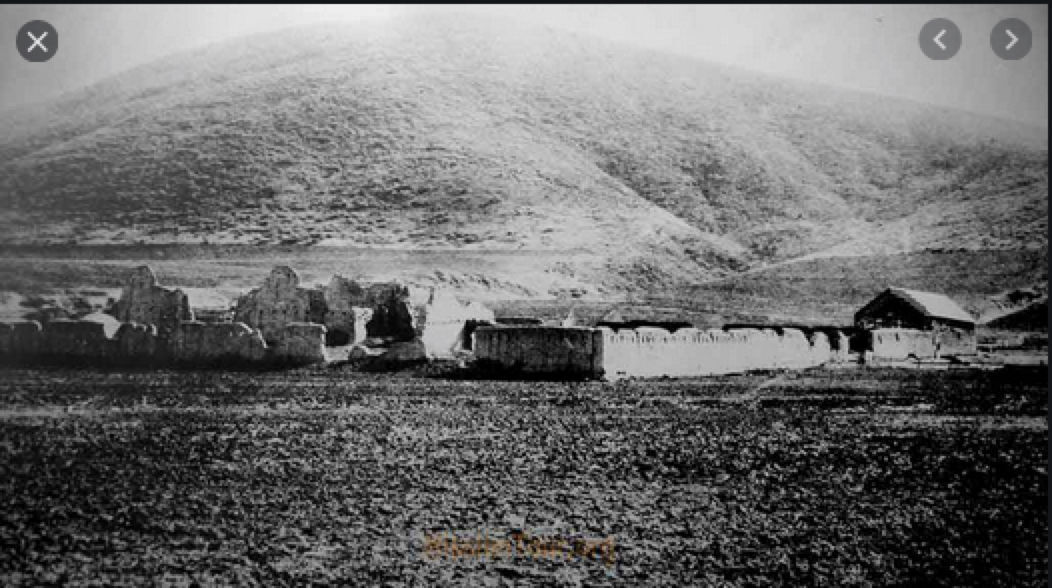 Ruins of the original La Purisima Mission which was located at what is now the south end of F Street, near the intersection with East Locust Avenue in Lompoc, circa 1812. 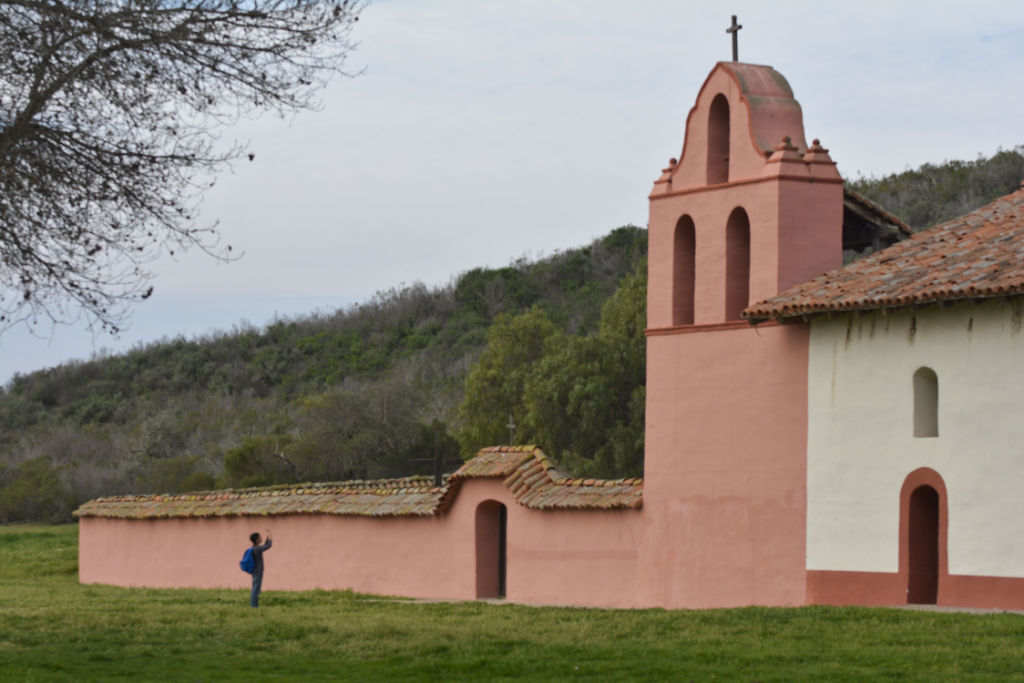 A man takes a photo of La Purisima Mission.

The Civilian Conservation Corps and the National Park Service work to fully restore the mission, circa 1934.

Ruins of the original La Purisima Mission which was located at what is now the south end of F Street, near the intersection with East Locust Avenue in Lompoc, circa 1812.

A man takes a photo of La Purisima Mission.

In 1787, the mission was originally located near the Santa Ynez River in what is now the city of Lompoc (Lompoc is a Chumash word meaning still water or lagoon).

The mission's original location was at what is now the south end of F Street, near the intersection with East Locust Avenue. The mission’s land holdings covered 470 square miles, from the Santa Maria River in the north to the Gaviota coastline in the south.

If you wish to learn more about La Purisima Mission, I recommend the book: "La Purisima Concepcion – The Enduring History of a California Mission" by Michael R. Hardwick.

The mission was laid out in the typical quadrangle pattern for defensive reasons. The first structures were made of adobe with a flat roof covered with straw and earth.

By 1798, there were 920 Native Americans at the mission and the original church was too small. In 1803, a new, larger church was completed. The mission was a working ranch with 4,000 cattle, 12,000 sheep and 1,150 horses. It also had orchards and vineyards as well a farmland that produced wheat, corn and beans.

On Dec. 21, 1812, a massive earthquake struck the Channel Coast and northern Los Angeles County. Not only La Purisima Mission but six other missions were severely damaged. Many, such as La Purisima, had to be abandoned and replaced by new structures.

After the earthquake, Lompoc experienced heavy rains that melted away the adobe walls, so the original mission was beyond repair.

The site chosen to build a replacement mission was across the Santa Ynez River about 4 miles north of the original location. The new site was in the La Canada de los Berros (the canyon of the watercress) and had a reliable source of water as well as adequate firewood, lumber, rock, lime and sand for construction of the new mission.

Also, there was less fog and it was thought it would be a warmer and healthier place to live.

Another factor in this location’s favor was that it was near the El Camino Real (the king's highway) that ran from Santa Ines to San Luis Obispo. Also, it was easier and safer to ford the Santa Ynez River near this new location. (Remember at the time there were no dams on the river, and it could be over a mile wide at times. Even when the water was low, there could be 2 miles of mire and mud to cross.)

The new La Purisima Mission proved to be an agricultural powerhouse. By 1818, the mission ranchos extended 36 miles from north to south and 15 miles from east to west. La Purisima owned 300,000 acres, which included 11 ranchos varying in size from 4,500 acres to 50,000 acres.

The main crops were wheat, barley, corn, peas, garbanzo and fava beans. Winter wheat became the most valuable crop, followed by corn and barley. Livestock was also plentiful on the mission ranchos. Cattle, horses and sheep were the primary animals raised for meat and hides.

In 1814, La Purisima counted 4,652 horses, the most of any one year. The sheep herds would eventually grow to 12,000 head, cattle numbered around 9,000 head. Of course, the labor to support such a large operation was provided by the Chumash neophytes.

All this success was about to end when Mexico won its independence from Spain in 1823. The Mexican government did not fund the missions at the same extent as Spain, so many of the soldiers ceased to be paid. They took out their frustrations on the Chumash neophytes and expected them to work without pay.

This all came to a head when a young Chumash boy from La Purisima visited a relative at Mission Santa Inés and was severely flogged by a soldier. The Chumash were outraged and attacked. They were turned back by priests and soldiers’ rifles but managed to set fire to most of the Santa Inés Mission.

Word quickly spread to both the Santa Barbara and La Purisima missions. The Chumash at Santa Barbara were quickly defeated by the soldiers from the Presidio and fled into the hills.

The Chumash at La Purisima were more successful and occupied the mission for over a month before troops from Monterey arrived and put down the revolt. In the end, over 20 Chumash were killed along with a few Mexican soldiers. As a result of the revolt, seven Chumash leaders were executed, and eight others imprisoned.

Life at the missions was never the same after this and the Chumash realized they could no longer return to their former way of life.

In 1834, La Purisima Mission was taken from the Catholic Church and secularized. The mission lands were parceled out to various Mexican rancheros. This left the Chumash with no choice but to go to work for the rancheros or retreat to the inland hills. Those that stayed became vaqueros, servants or laborers. Some of the more skilled became carpenters, masons, shoemakers, saddlers, cooks, bakers, shepherds, fishermen and blacksmiths — all skills they learned at the mission.

Unfortunately for three consecutive years, from 1837 to 1839, a smallpox epidemic struck the area causing an estimated 75% reduction of the Chumash population.

After secularization, the mission was sold in 1845 and fell into disrepair. The property was returned to the Catholic Church in 1874, but the buildings were in such poor condition that the church sold most of the property.

By 1904, roof tiles had been removed from the mission buildings. Rains had eroded away the adobe structure so that by 1934 it had become a series of shapeless mounds of brown adobe, overgrown with weeds and brush.

Union Oil, which had previously purchased the property, realized the important historical significance of the mission and deeded the property to Santa Barbara County with the understanding that the county would get federal aid to restore the mission.

Santa Barbara County deeded the land to the state of California and the state purchased additional property surrounding the mission. A citizens committee recommended that the site become a state park and that the mission buildings be completely reconstructed.

In November 1934, the Civilian Conservation Corps (CCC) and the National Park Service began the project to fully restore the mission. Staff historians, archaeologists, engineers and architects set to work to find the facts of the original structures. They developed the plans from which the CCC crews could rebuild the entire mission.

Over 200 men were involved in the massive job of reconstruction and restoration. The work went on for several years. The CCC enrollees made 110,000 adobe bricks, 31,000 roof tiles and 15,000 floor tiles by hand for the residence building alone.

In late 1941, on the eve of the 154th anniversary of its original founding, La Purisima Mission was ceremoniously opened to the public as a state historic monument. The date was Dec. 7, 1941 — the day the Japanese attacked Pearl Harbor and the United States entered World War II.

Work continued on the mission restoration into the 1990s. All the main buildings have been rebuilt and furnished as they were in 1820. The original water system was restored and 2,000 acres were acquired to act as a buffer around the mission.

Today, La Purisima Mission is a state park, and a National Historic Landmark. In addition to the restored original buildings, the nearly 2,000-acre park is home to 25 miles of hiking trails.

La Purisima Mission is the most completely restored mission in California with 10 of its original buildings fully restored and furnished. The church, shops, living quarters, blacksmith shop, gardens and livestock are all as they were in the 1820s.

A visitor center features information, displays and artifacts with full illustration of life as it was at the mission. A self-guided tour gives visitors the chance to step back in time for a glimpse of a brief, turbulent time in California’s history.

More in 23 stories explaining the Central Coast's history, landscape, and traditions from Judith Dale (13 of 23)