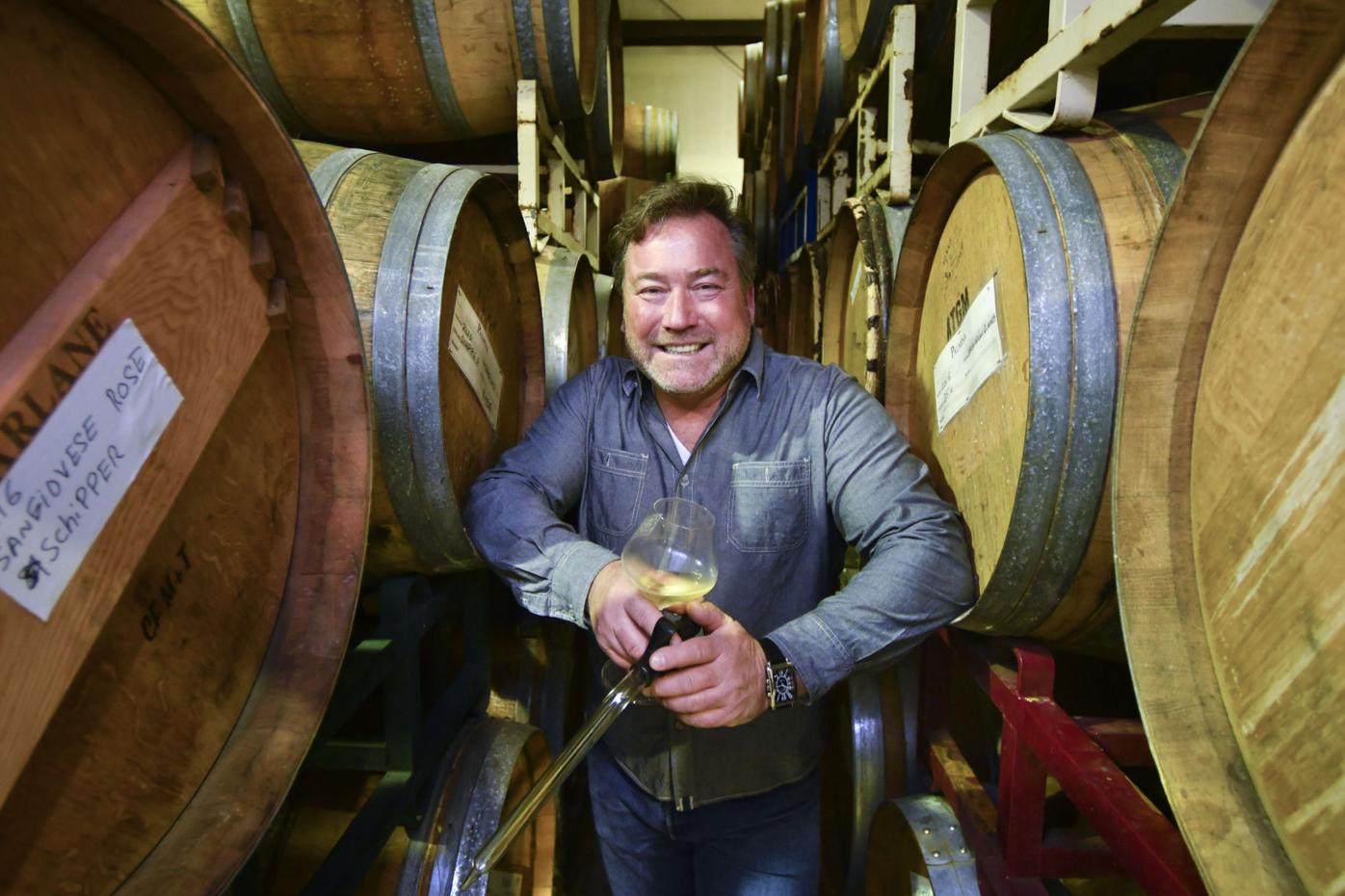 Steve Clifton is the owner/winemaker of Palmina winery. 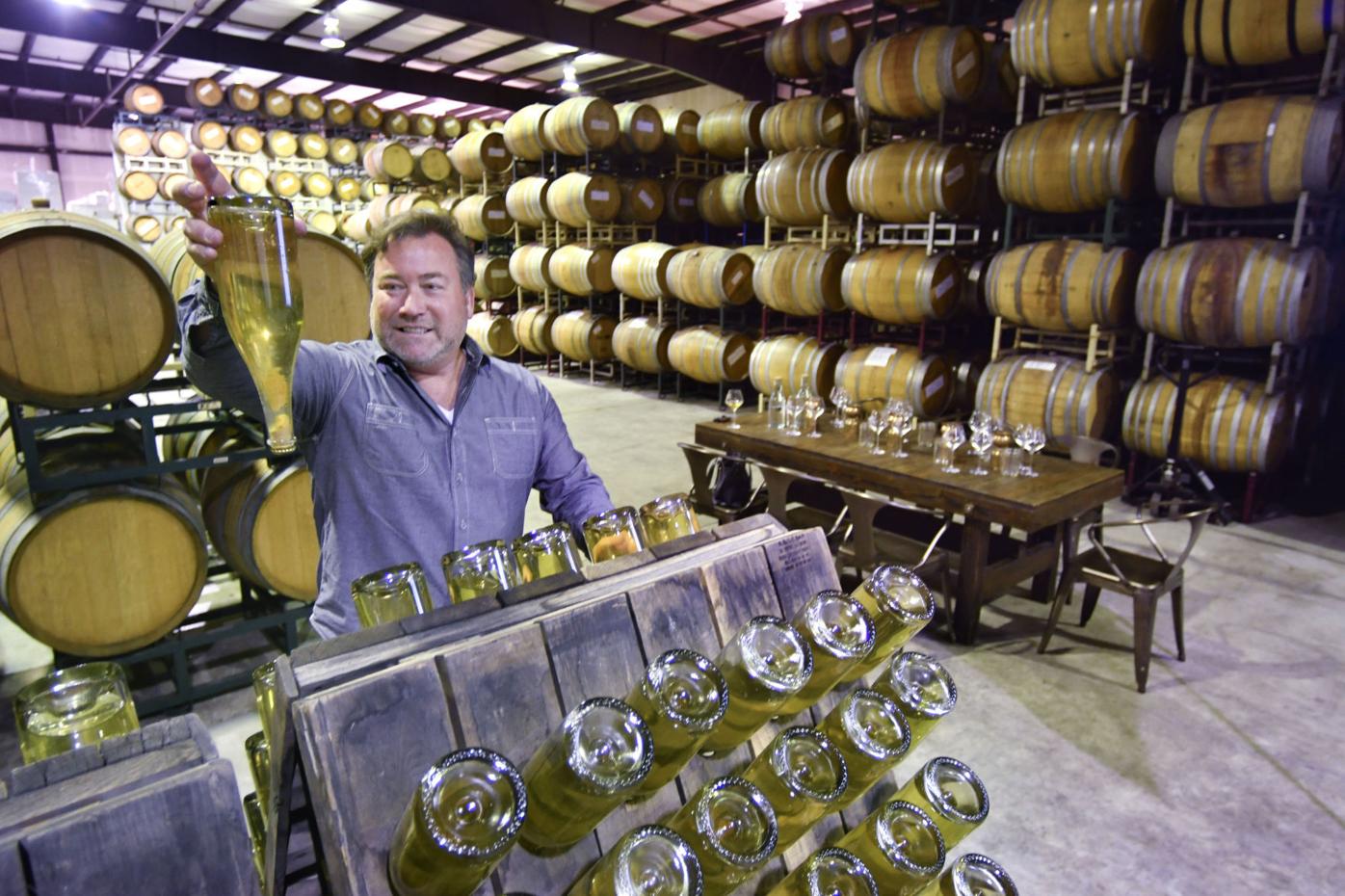 Steve Clifton, in his Palmina winery in Lompoc, is shown riddling a sparkling blaufrankisch wine he makes for Solminer. 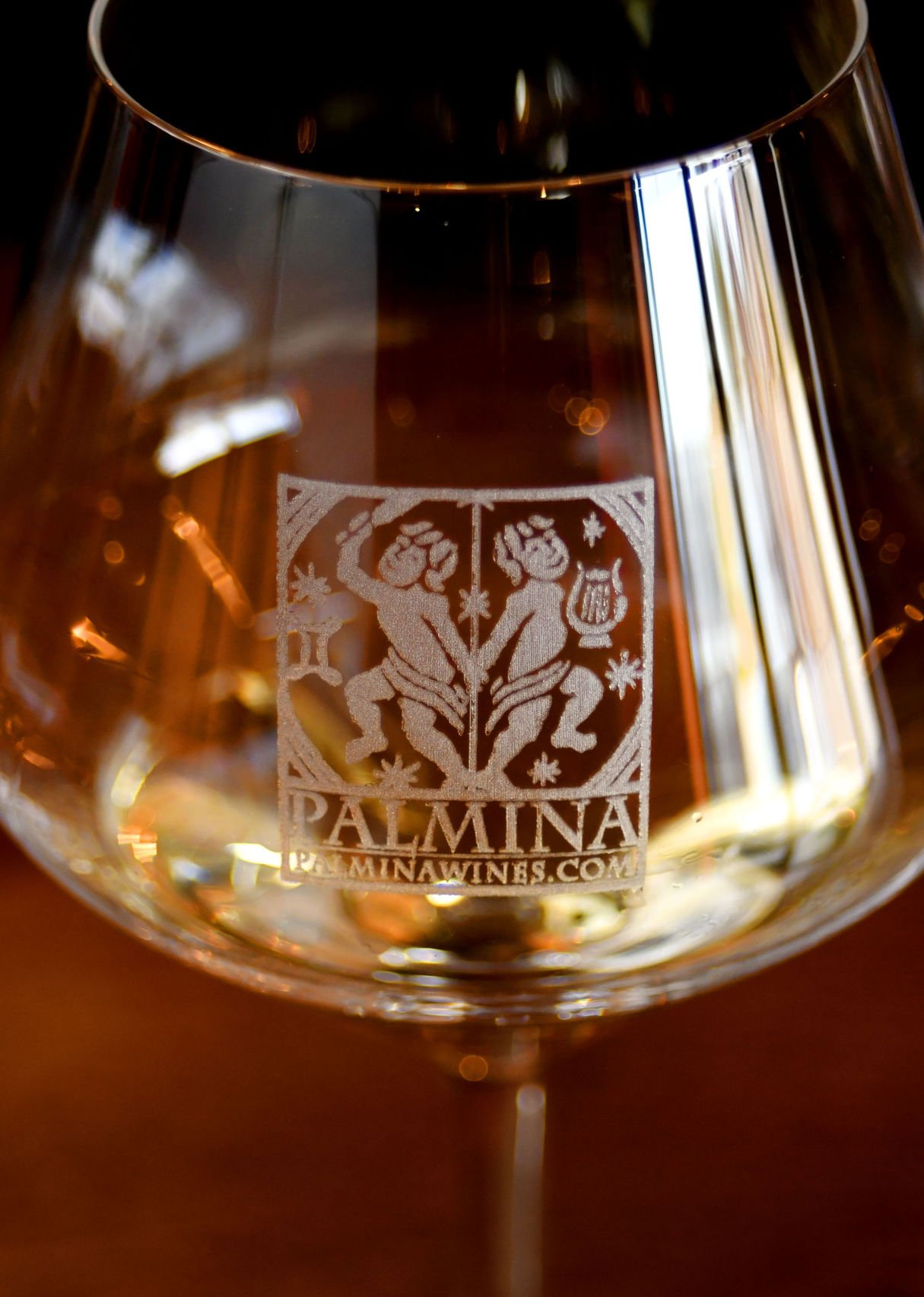 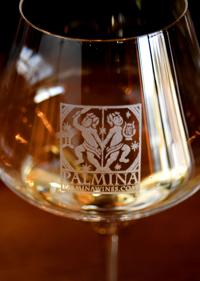 Steve Clifton produces about 15,000 cases of Palmina wine each year. 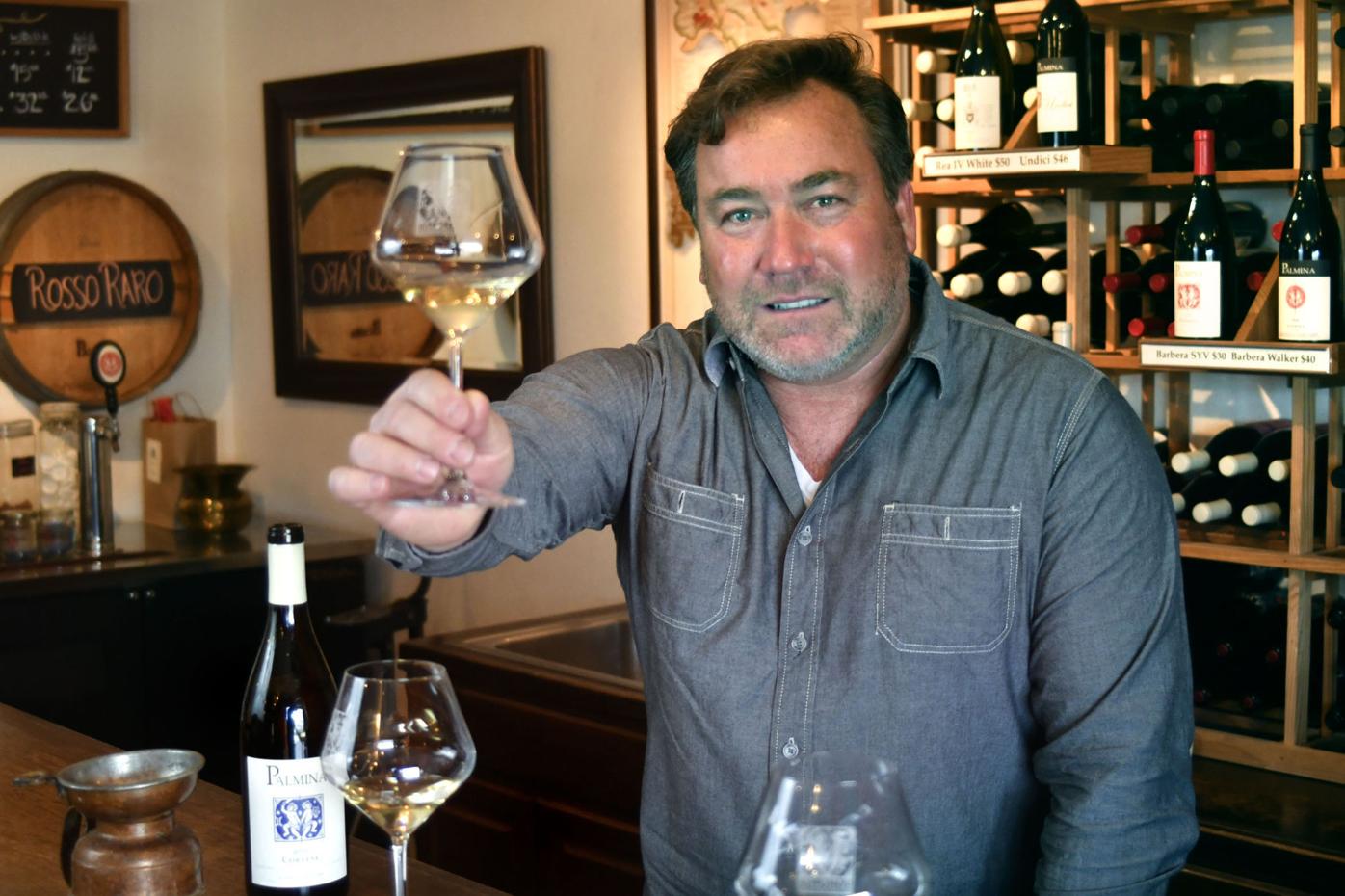 Steve Clifton launched his Palmina winery in 1995. The tasting room is in the Lompoc Wine Ghetto. 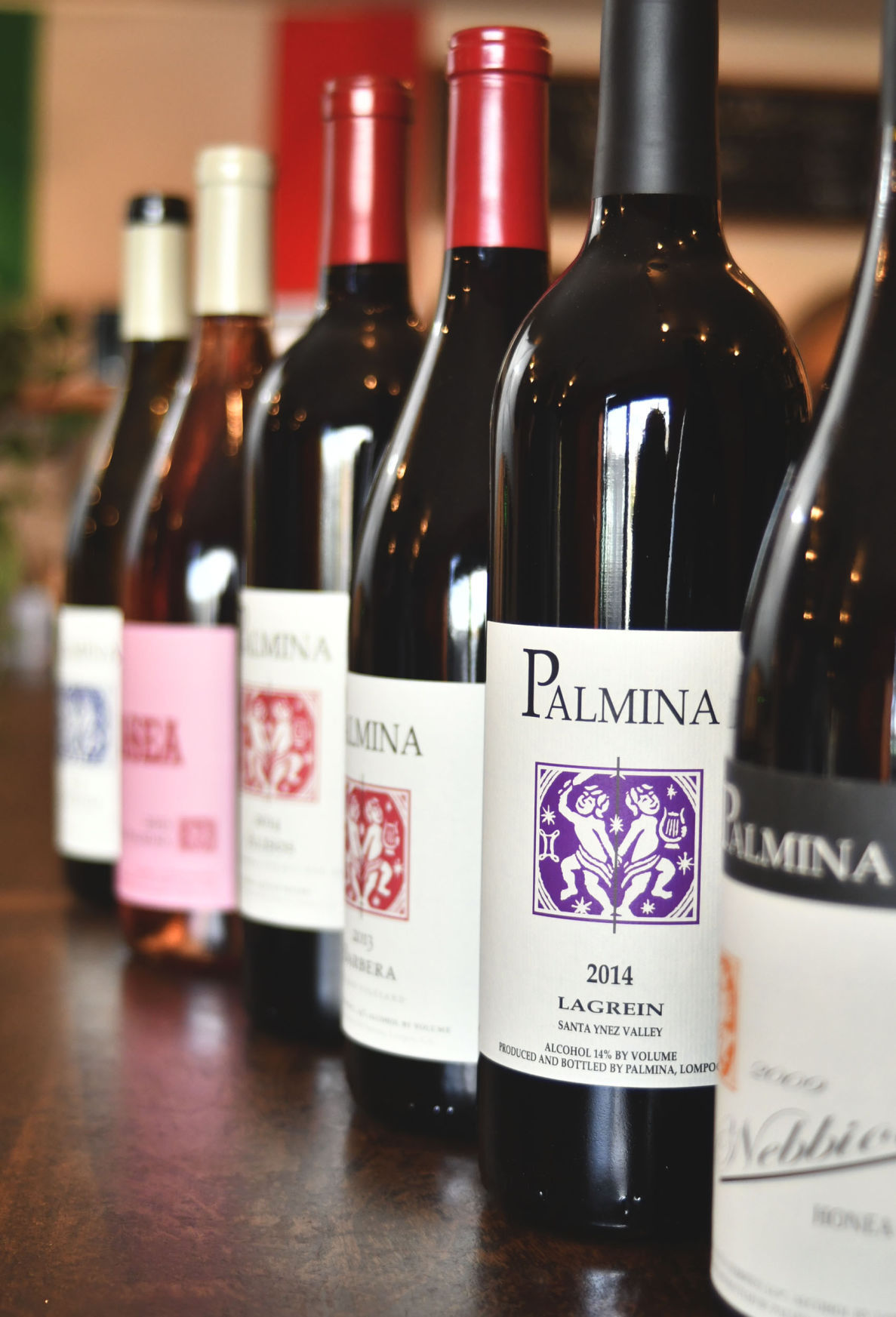 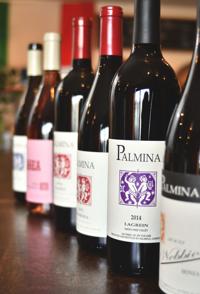 A line-up of Palmina wines at its tasting room in the Lompoc Wine Ghetto. 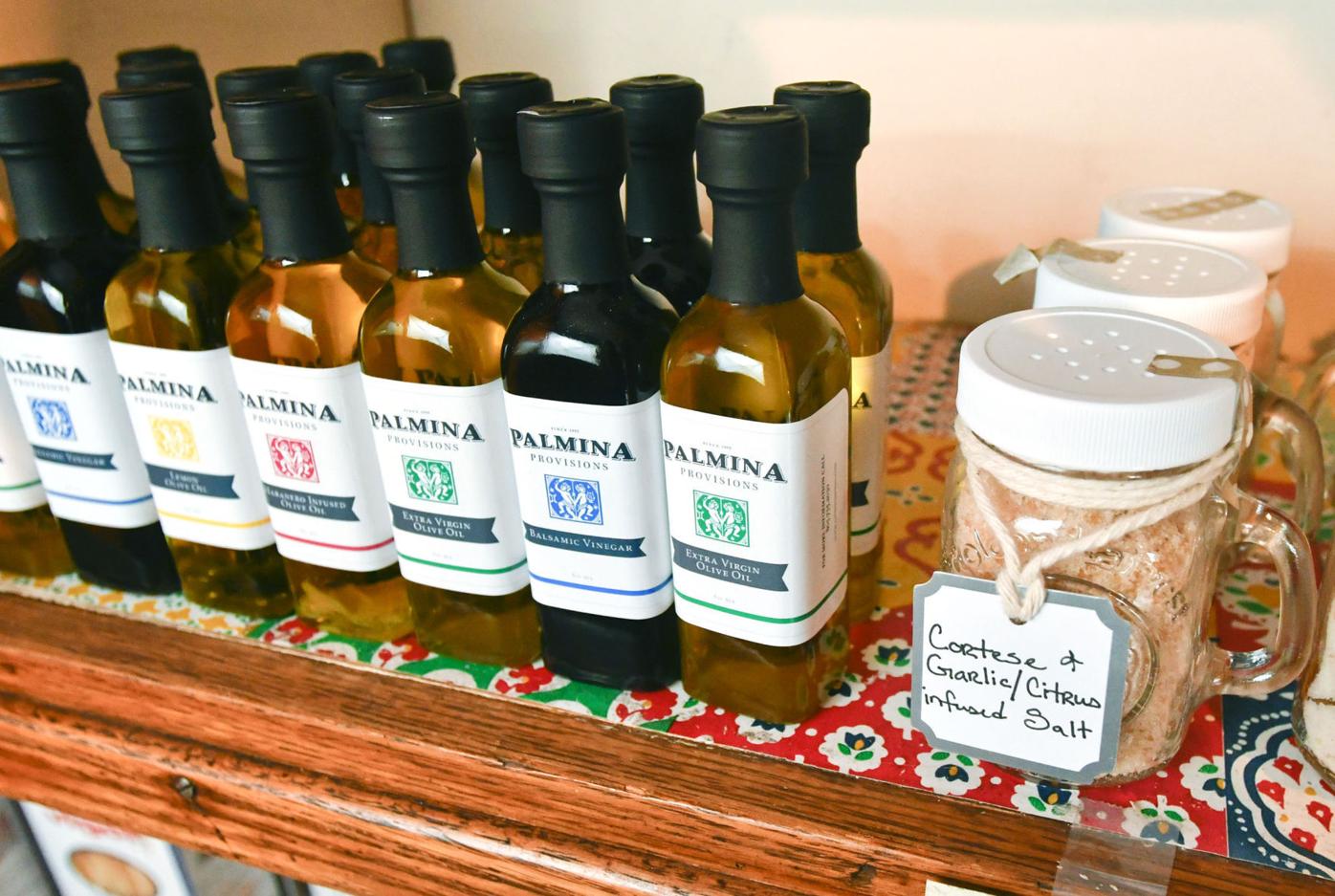 Palmina winery sells olive oil and seasonings under its label. 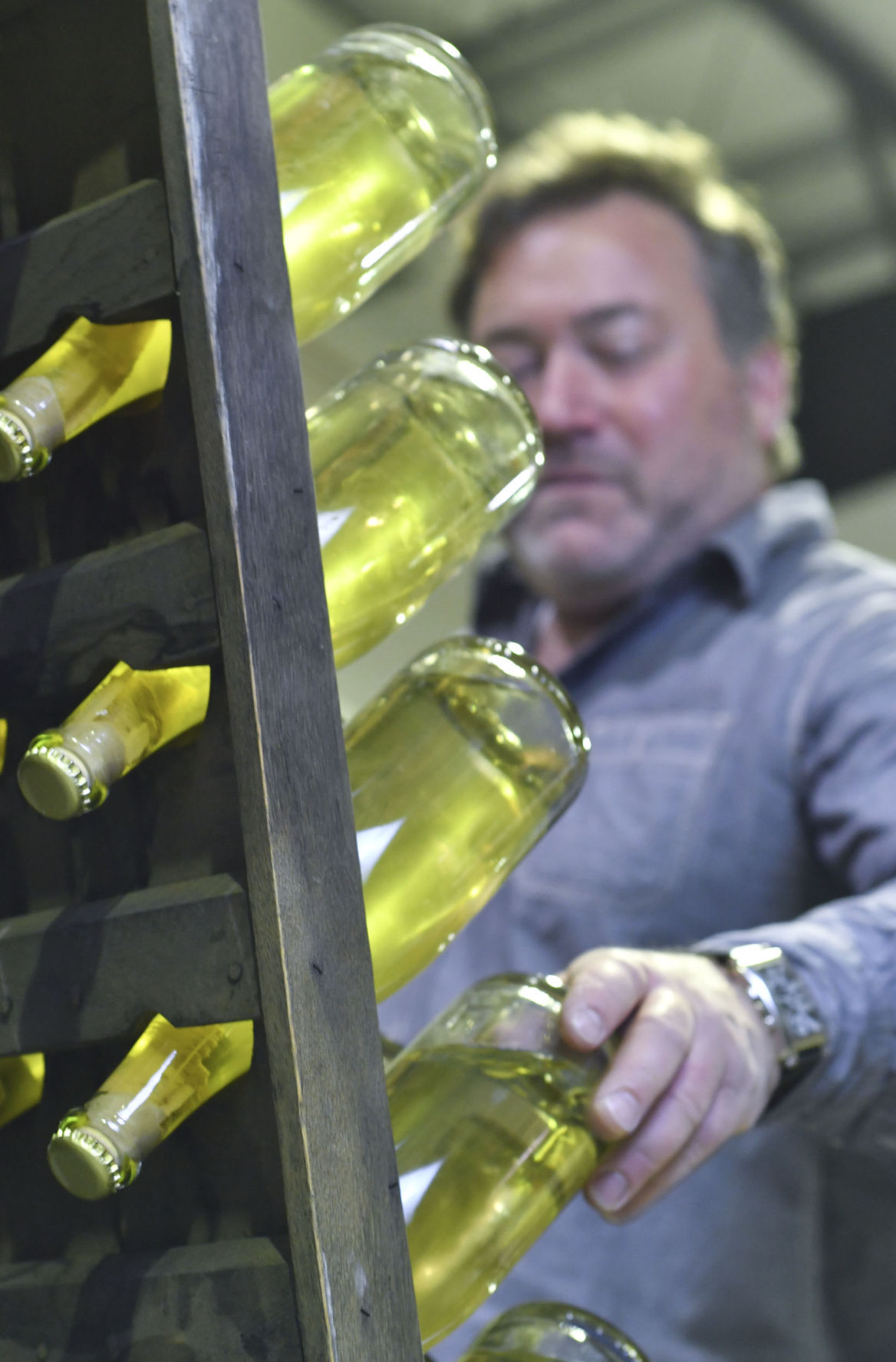 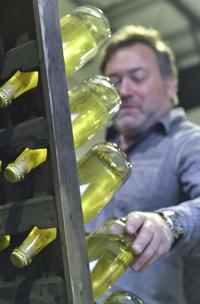 Steve Clifton makes a sparkling wine for Solminer at his Palmina winery in Lompoc. 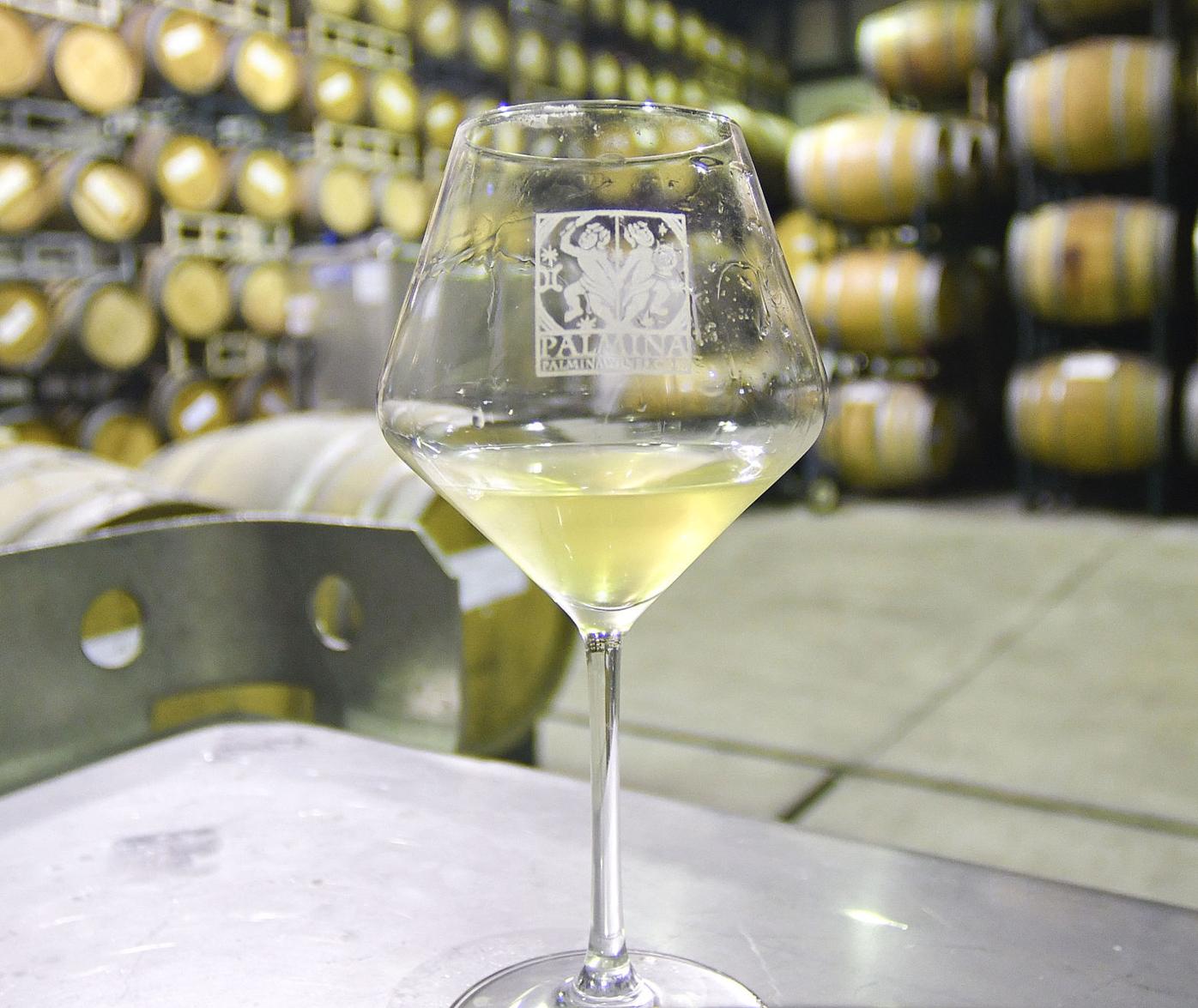 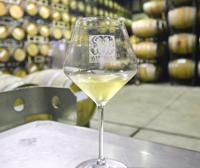 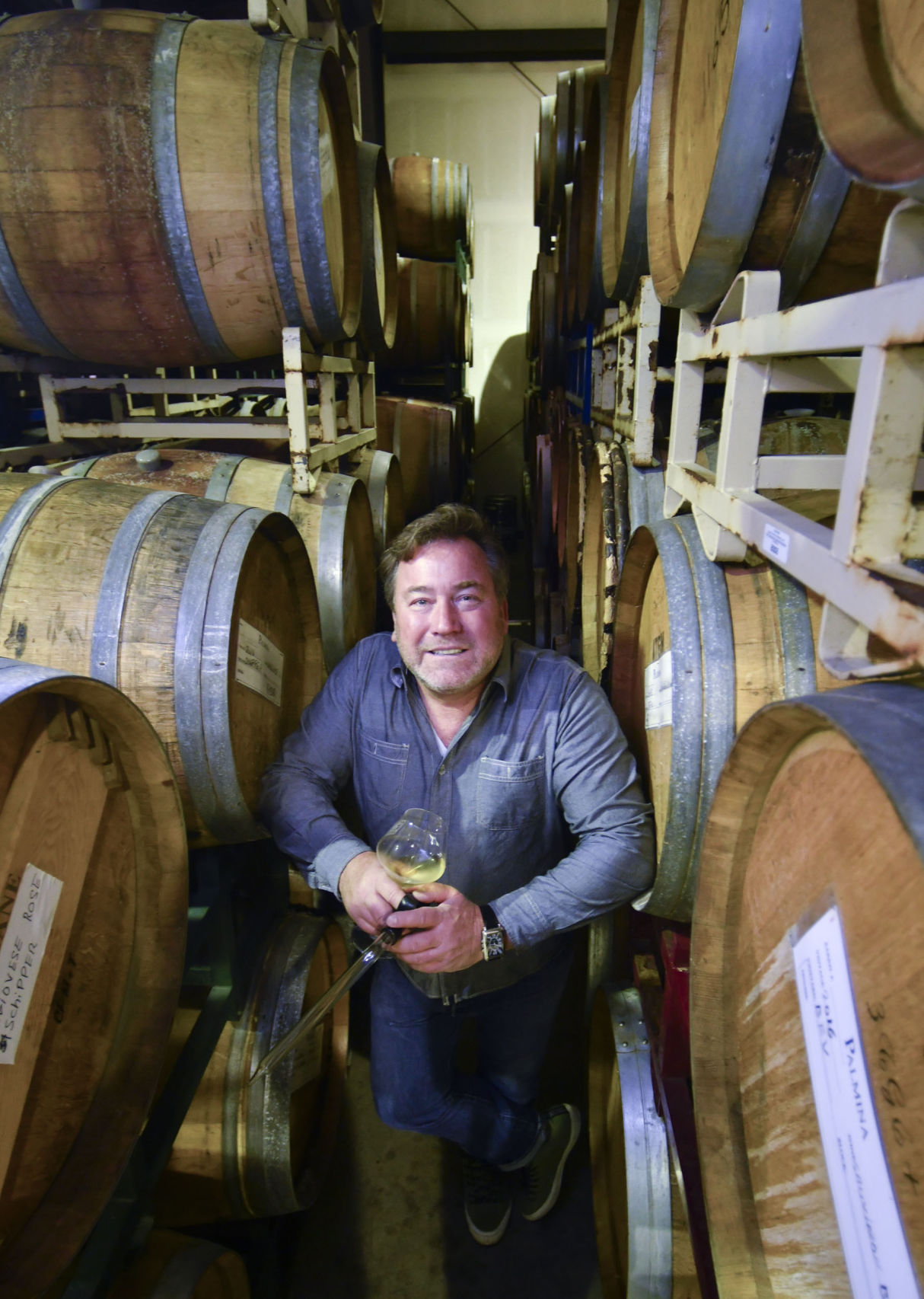 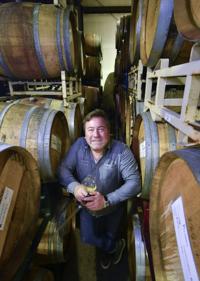 Palmina owner/winemaker Steve Clifton among the barrels at his Lompoc winery.

Steve Clifton is the owner/winemaker of Palmina winery.

Steve Clifton, in his Palmina winery in Lompoc, is shown riddling a sparkling blaufrankisch wine he makes for Solminer.

Steve Clifton produces about 15,000 cases of Palmina wine each year.

Steve Clifton launched his Palmina winery in 1995. The tasting room is in the Lompoc Wine Ghetto.

A line-up of Palmina wines at its tasting room in the Lompoc Wine Ghetto.

Palmina winery sells olive oil and seasonings under its label.

Steve Clifton makes a sparkling wine for Solminer at his Palmina winery in Lompoc.

Palmina owner/winemaker Steve Clifton among the barrels at his Lompoc winery.

Specializing in varietals, like nebbiolo, dolcetto, lagrein, malvasia bianca and vermentino, Palmina stands alone among wineries in our region. Owned by winemaker Steve Clifton, Palmina exclusively produces wine from Italian varietals grown in Santa Barbara County. It's a model that has earned Palmina international acclaim, even in Italy.

Clifton made his first trip to Italy in 1988 when he went to visit his sister who had married an Italian and moved to Milan. Then a rock 'n' roll singer and night club manager, Clifton was enthralled by the lifestyle he experienced.

His brother-in-law's family's life was centered around a meal. There might be a dozen people at the table, with everybody yelling and their arms flying. There was Uncle Gino, the communist, and Mateo, the fascist, and everybody in between. No matter what the political or social disagreements, they were all back at the table the next night. They were still family.

"In America, we too often only gravitate to like-minded people, we can only be around people who agree with us. It wasn't that way in Italy. It changed my life," Clifton recalled.

Clifton had already begun educating himself about wine. While in his band, he waited tables at an Italian restaurant in Laguna Beach and discovered a sure way to up his tips was to become knowledgeable about wine and convince customers to order a glass or two, or a bottle. He ended up becoming the restaurant's wine buyer. He also learned that just up the road in Santa Barbara, there were people who would sell him a barrel of wine that he could bottle and put on his list.

A conversation with Stephan Bedford, then winemaker at Rancho Sisquoc, got him his first job in the industry. He gladly took it even though for the first few weeks, it meant commuting from Laguna Beach.

"I thought I was going to kill myself," he joked.

Fortunately an old family friend -- Clifton called her Nonna (Grandmother) Paula -- lived in Goleta and gave him a place to stay until he got himself situated.

"I had to be at Rancho Sisquoc at 6 a.m. She'd get up and fix me breakfast," Clifton recalled. He'd get home and find his "black and whites" neatly laid out for him to make a quick change for his evening job, waiting tables at the fine dining Santa Barbara restaurant, Downey's. In her mid-70s at the time, Paula would nap until her houseguest got home. She'd meet him at the door at midnight, two martinis in hand, and they'd sit and talk about the day.

Paula died in 1996 and it was only then Clifton learned that his beloved surrogate grandmother's named had been changed when her family immigrated to the United States from Italy. Nonna Paula's given name was Palmina.

After working his way up from assistant winemaker at Rancho Sisquoc and winemaker at Beckmen, in 1995 Clifton made his own wine. It was 200 cases of a sangiovese blend he called Alisos. He formally named the company Palmina several months later in honor of Paula.

Alisos, which Clifton still makes, was the wine that launched dozens more. Nebbiolo came next. Then pinot grigio because, he candidly admitted, he needed a less-expensive wine that would give him cash flow against the long term investment in nebbiolo. A chance meeting with the late Milt Honea of Solvang took Clifton to the next level.

"Milt was going to plant a vineyard and wanted Italian varietals. We brought over cuttings from all these Italian wines that had never before been planted in California -- barbera, dolcetto, tocai friulano."

Like a man possessed, Clifton kept finding other Italian varietals that could be grown in the county. By 2015, he was bottling 35 different wines; sometimes it was the same varietal from three different vineyards. Starting with the 2016 vintage, he's decided to cull that list down to 15 wines, which will include a sparkling or two.

Throughout the growth of Palima, Clifton was also building a separate label, Brewer-Clifton which has won praise for its chardonnay and pinot noir wines. Clifton sold out his interest in Brewer-Clifton in 2016, just as he was building up yet another new operation, La Voix Winery, his first solo project and dedicated to French varietals.

Clifton has grown Palmina from the initial 200 cases to an average 12,000 to 15,000 cases annually produced in his warehouselike Lompoc winery.

The Palmina tasting room is a few minutes away in the Lompoc Wine Ghetto. It has an earthy warm and welcoming feel. Fittingly for this winemaker who values wine not so much as a beverage as an instrument to bring friends and family together, a large community table is in the middle of the room.

On any given day, Clifton may be checking on grapes in one of the several vineyards Palmina leases, overseeing harvest and bottling operations, taking barrel samples. He may be found entertaining his wine club members or tourists from Orange County, doing a private tasting for his distributors in from Japan or a wine writer from New York City, or fielding an emailed request from the White House. President Barack Obama toasted Italian Prime Minister Matteo Renzi with a Palmina 2015 vermentino at his final State Dinner on Oct. 18, 2016.

Nonna Paula would be proud.