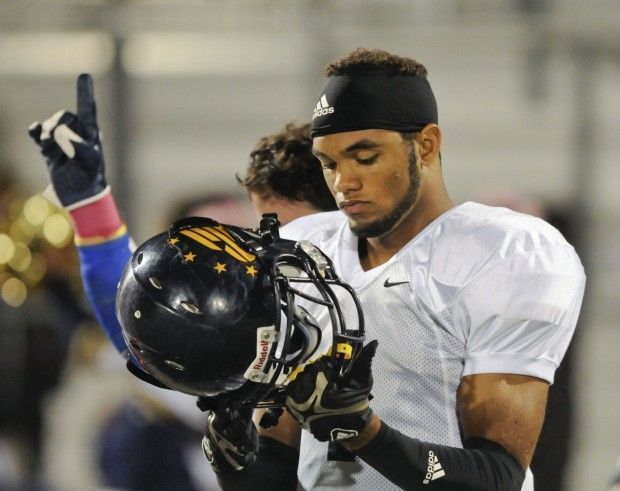 Arroyo Grande’s Seth Jacobs, seen before a game against Pioneer Valley in 2011, announced his retirement from football Tuesday morning. Jacobs spent the past four years at Oklahoma State and had one year of eligibility remaining. 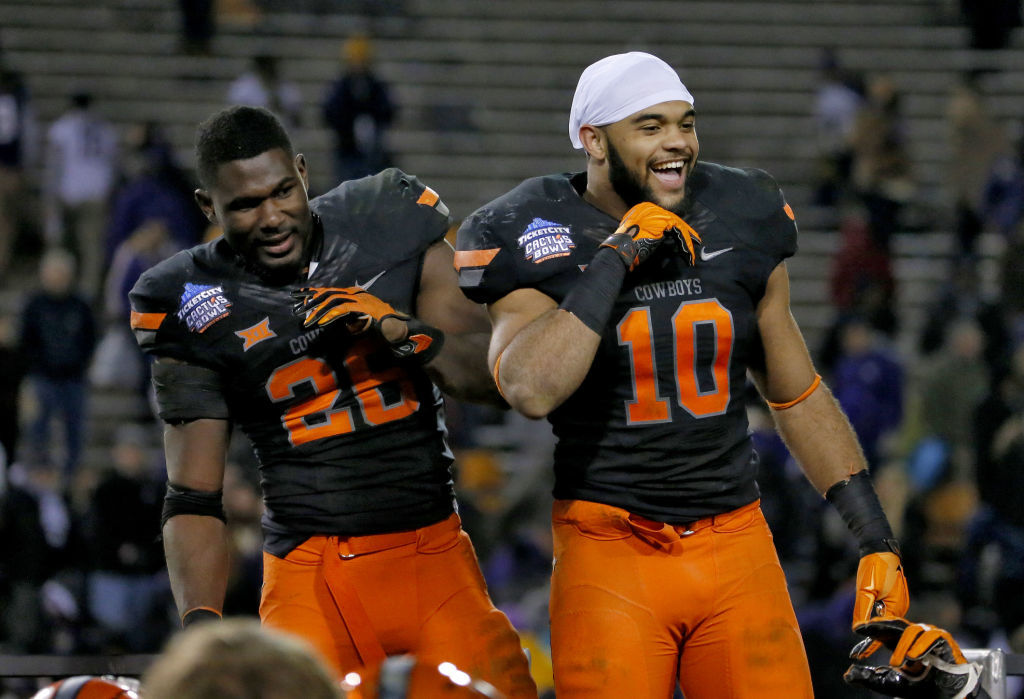 Arroyo Grande Seth Jacobs (10) celebrates with teammate Desmond Roland after the Cactus Bowl in 2015. Jacobs announced his retirement from the sport in January of 2016. 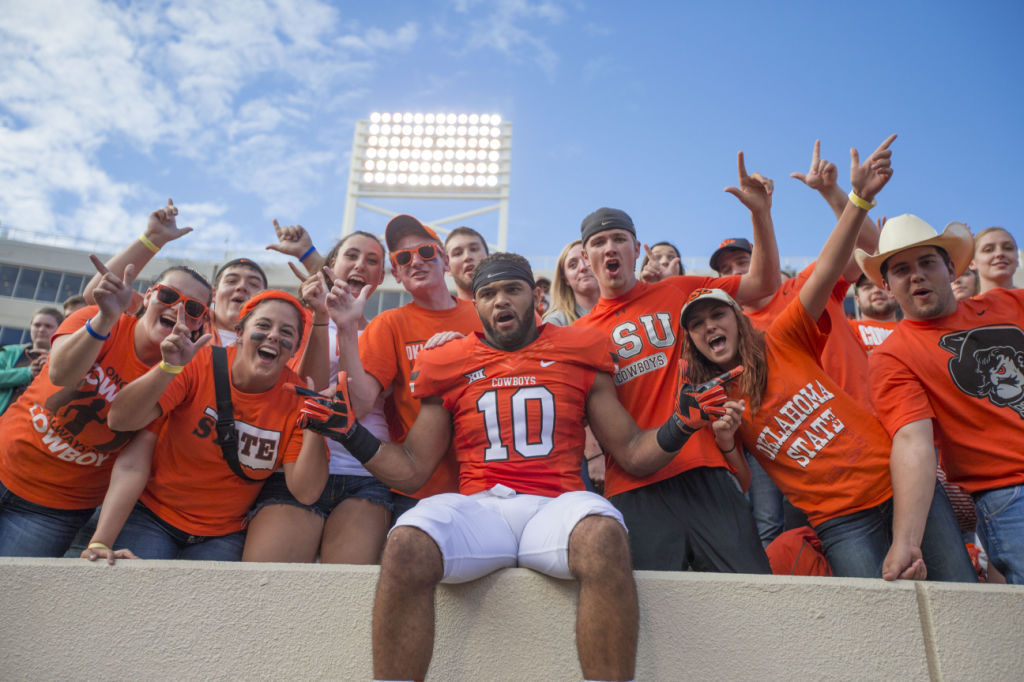 Seth Jacobs had quite a time in Stillwater. 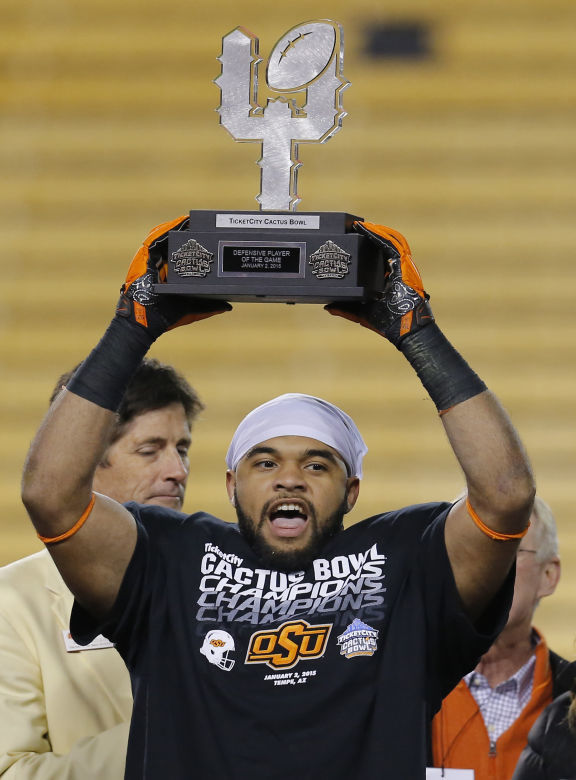 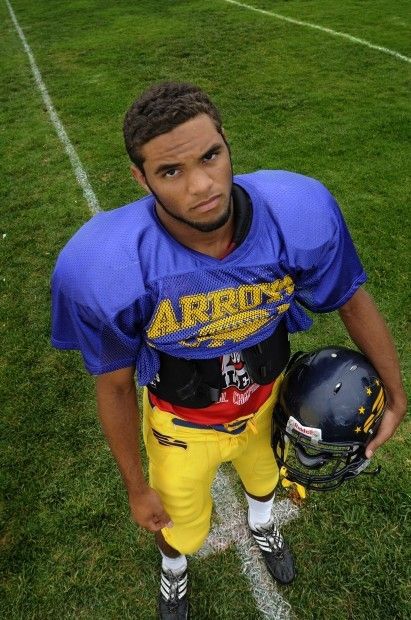 Arroyo Grande's Seth Jacobs was a highly recruited defensive and offensive threat for the Eagles before signing with Oklahoma State in February 2012.

The long, storied and successful football career of Seth Jacobs has come to an end.

One of the top players in Arroyo Grande High School history announced Tuesday that health concerns are forcing him to retire from the game.

The 2012 Arroyo Grande grad had one year of eligibility left at Oklahoma State. Jacobs spent the past two seasons starting at middle linebacker for the Cowboys, earning defensive MVP honors for Oklahoma State after a win over Washington in the Cactus Bowl, just over a year ago, Jan. 2, 2015.

Jacobs made his announcement through social media.

"My neck has been a problem for me since my sophomore year of high school," Jacobs wrote in a statement on Facebook. "If I get hit just right or jarred in the wrong way, I get numbness and shooting pains that go through my arms. When I was younger it didn’t happen to me nearly as much. This last season it was not uncommon for me to get a stinger (numbness and shooting pains) any day I made contact with my head. With that being said, playing football does not take precedence over the quality of life I want to live."

Jacobs graduated from Oklahoma State in December with a degree in communications.

"I have decided to leave the game and not return for my fifth year," Jacobs posted Tuesday morning. "I have had a wonderful learning experience while living in Stillwater and am forever grateful for the opportunity.

"I am beginning to value my body, health and well being more than extending my career. Therefore, I will not be playing my last year of eligibility and will pursue a career outside of football."

Arroyo Grande coach Tom Goossen said Jacobs was one of the best student-athletes he's worked with in his four decades of coaching football.

"I hold him in high regard. As a football player he was one of the best I've coached in 43 years. He was smart, he was fast, he was tough and he had an incredible competitive spirit. He was the whole package."

Jacobs had long talked about being more than just a football player. During his days at Arroyo Grande High School, Jacobs participated in a number of extracurricular activities. Last January he said he was already preparing for life after football. And now that time has come.

"I know I'm more than just a football player," Jacobs said during a visit home after the Cactus Bowl. "That's one of those things, where the way I was raised and the people I've been surrounded by, I'm not trying to be anybody else but myself. I've been surrounded by great people and my parents raised me to be articulate and represent myself and my family."

"I'm not 100 percent sure what I'll do after football, we'll see," Jacobs said last year.

In his post Tuesday, Jacobs said he holds no ill feelings toward the game.

"I love football and I would never discourage anyone from playing it," he wrote. "I have played this game since I was 8 years old and enjoyed every phase. I know that it is time for me to step away. Thank you, Cowboy family, for this wonderful experience. I created lifetime friends through this experience and was proud to represent orange and black throughout the years."

"We wish (Seth) the best as he moves into the next step of his life," Gundy wrote online. "His intelligence & toughness made him a valuable member of our team."

Goossen said he was proud Jacobs made the decision he did.

"It really doesn't surprise me that Seth would choose the correct path," Goossen said. "It's wonderful. Football is not who he is, he's much more than that. He has aspirations that are far beyond the football field. Any time a young man that is so tied to the game can walk away from it, my respect for him has done nothing but gone up. I'm proud of him for making this decision."

We are on a quest to find the Player of the Decade for 2010-2019. We will be publishing profiles on 10 nominees for the honor over the new few weeks. Then we'll ask you, our readers, to vote for the Player of the Decade. The first nominee up is Arroyo Grande's Seth Jacobs. He played quarterback, running back, receiver, tight end, safety and linebacker with the Eagles before eventually earning a starting linebacker spot at Oklahoma State.

Arroyo Grande’s Seth Jacobs, seen before a game against Pioneer Valley in 2011, announced his retirement from football Tuesday morning. Jacobs spent the past four years at Oklahoma State and had one year of eligibility remaining.

Arroyo Grande Seth Jacobs (10) celebrates with teammate Desmond Roland after the Cactus Bowl in 2015. Jacobs announced his retirement from the sport in January of 2016.

Seth Jacobs had quite a time in Stillwater.

Arroyo Grande's Seth Jacobs was a highly recruited defensive and offensive threat for the Eagles before signing with Oklahoma State in February 2012.