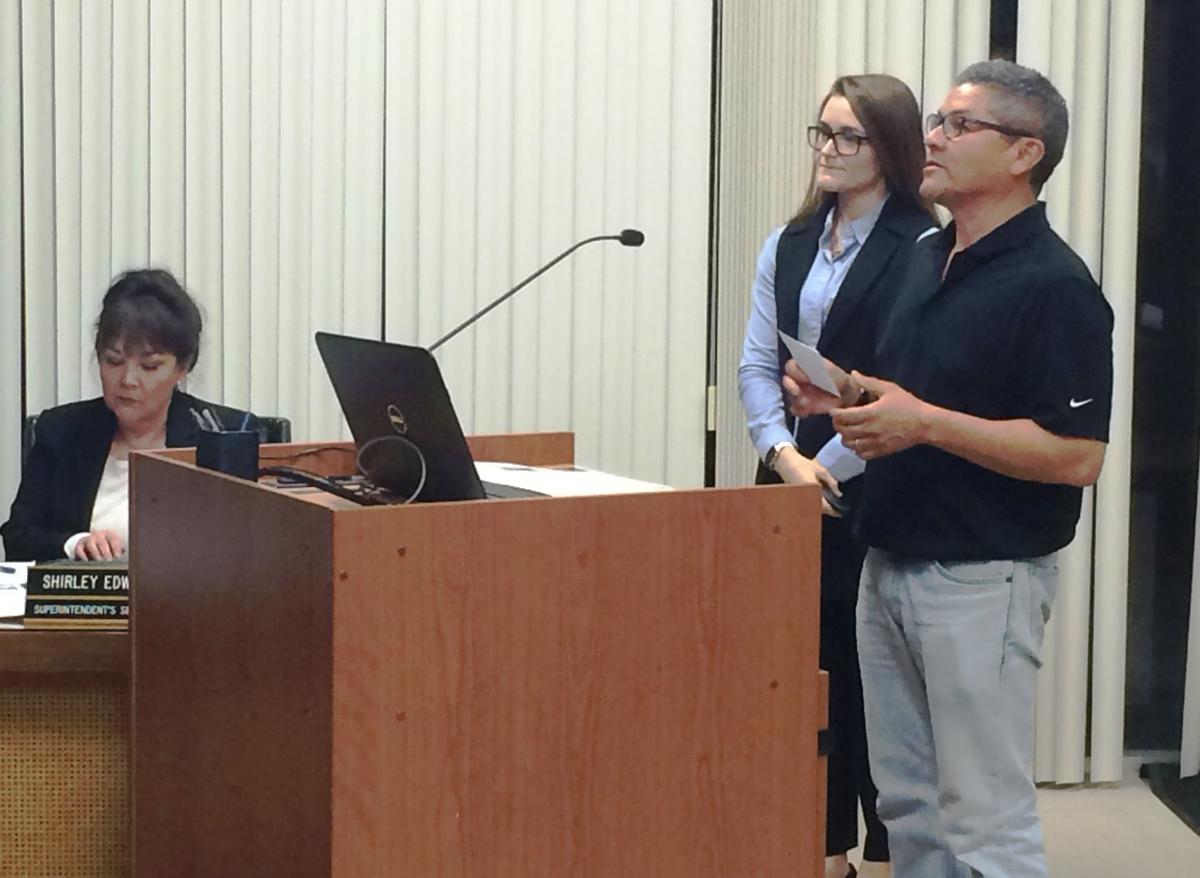 Tom Blanco, a trainer and PE teacher at Lompoc High School, speaks to the Lompoc Unified School District Board of Education on Tuesday night about the benefits of remodeling Huyck Stadium. He is joined by Ashley Costa, center, the executive director of the Healthy Lompoc Coalition. At left is Shirley Edwards, an assistant to LUSD Superintendent Trevor McDonald. 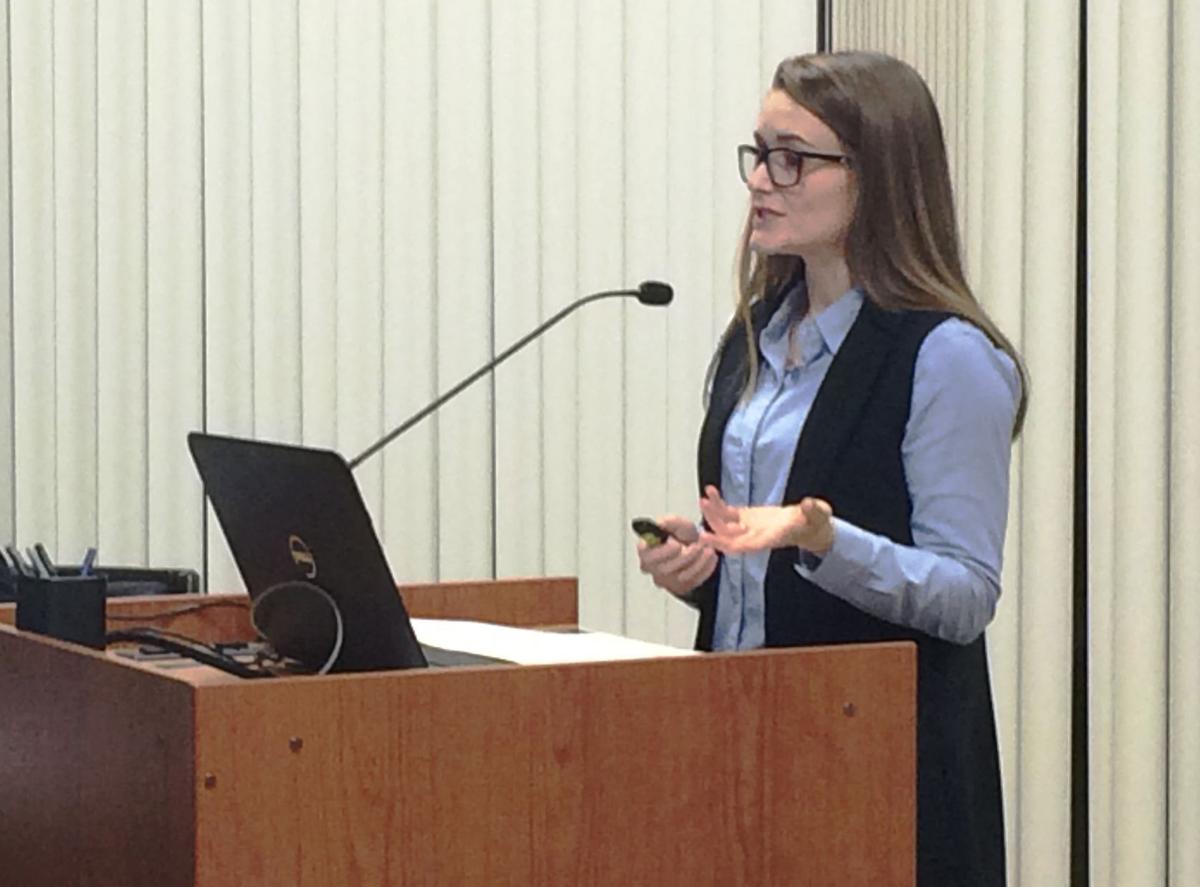 Ashley Costa, the executive director of the Healthy Lompoc Coalition, speaks to the Lompoc Unified School District Board of Education on Tuesday night about the benefits of remodeling Huyck Stadium.

Lompoc’s aging Huyck Stadium may soon be due for a major facelift.

A group looking to redevelop the 54-year-old stadium’s track and field made a presentation to the Lompoc Unified School District Board of Education on Tuesday night that outlined the proposed upgrades and highlighted the benefits the changes would bring. The project, estimated to cost nearly $2.4 million, would primarily consist of converting the natural grass field to synthetic turf and switching the track from its loose red clay to a synthetic polyurethane surface.

Ashley Costa, the executive director of the Healthy Lompoc Coalition, led the presentation. She was joined by Lompoc High School trainer and physical education teacher Tom Blanco, and Eric Jennings, a representative of Byrom-Davey, Inc., which remodels athletic facilities throughout the state.

“With your help, we can renovate this track and field to preserve its celebrated history and ensure that it will continue to serve your students and the Lompoc community over the next 50 years,” Costa told the board. “We ask you to consider making this part of your legacy: To reestablish a source of pride for the community and unite LUSD schools in a stadium for which they can be proud.”

Along with introducing the proposal, Costa asked the board to consider funding half of the anticipated cost, or about $1.2 million. She suggested that other community agencies would join with the Healthy Lompoc Coalition to help foot the other half of the bill.

As part of the proposal, the LUSD-owned stadium would move into a joint-use agreement between the school district and the city of Lompoc. This would allow the facility to be open for public use when the stadium isn’t in use by LUSD or for some other event, such as the annual Relay for Life fundraiser.

One of the letters of recommendation provided to the board by Costa was from Lompoc City Manager Patrick Wiemiller, whom Costa said has indicated that the city would potentially supply an employee to staff the new-look facility. The city is not expected to provide a financial contribution, Costa clarified after the presentation.

That ability to serve the entire community was a key part of the presentation from Costa, whose Healthy Lompoc Coalition focuses on improving community health.

Costa pointed out that about 20.5 percent of Santa Barbara County residents are considered obese.

“And, according to a UCLA study, 48.6 percent of Lompoc’s children are overweight or obese, the highest in Santa Barbara County,” she said.

She suggested that having a facility for children and families to utilize for exercise, without the added costs that come with many sports, would help to combat that high rate of obesity.

The remodeled stadium would also benefit LUSD, according to the speakers.

Because the newly resurfaced track would be reconfigured at the regulation 400 meters and include nine lanes, it would make the facility eligible for CIF meets, something it currently is not. The synthetic grass field would also cut down on maintenance costs, as well as decrease the district’s water footprint.

Jennings pointed out that his firm has done more than 350 similar jobs at various high schools and colleges, and has even developed partnerships with professional teams, such as its work on the practice facility for the NFL’s Los Angeles Rams.

He said the proposed track typically lasts about 30 years, and the new synthetic field usually lasts 10 to 12 years and would come with an eight-year warranty.

After the proposed upgrades, which would take an estimated four to six months to complete, Lompoc High School and Cabrillo High School would continue to share the facility for home football games. To that end, graphics representing both schools could be applied to the surface.

Boardmember Dick Barrett acknowledged after the presentation that he was fully in support of the proposal. The item wasn’t up for any vote on Tuesday, but Barrett implored his colleagues on the board to seriously consider moving forward if and when the item returns for action.

“I think the commitment from the community is amazing,” Barrett said, noting that more than $1 million of the cost could come from outside the district. “There’s money here, folks, and there’s people here willing to (work).”

Barrett said he felt like the improved facility would give local athletes a better chance of excelling, and that it would put them at least on par with a lot of their opponents around the Central Coast.

“We’re the only place in Santa Barbara County that doesn’t have it,” he said of a modern stadium facility. “Go to Santa Barbara and look at all the high schools. Go to Santa Maria. Go to San Luis (Obispo) County. We’re about the only ones around without it. We don’t need to be second-class citizens anymore with this thing. It’s time. Hopefully we can work it out somehow.”

The proposed remodel of Lompoc’s Huyck Stadium moved closer to becoming a reality Tuesday evening, as the Lompoc Unified School District Board…

The organization leading the way in the proposed $2.4 million renovation of Lompoc’s Huyck Stadium was granted a fundraising extension Tuesday…

The Rotary Club of Lompoc has pledged what will likely be a sizable donation toward the remodel of the track and field at Huyck Stadium, proje…

The planned renovation of Lompoc’s Huyck Stadium is nearing its funding goal, and the remodel could involve more immediate upgrades than origi…

When CoastHills Credit Union announced last month that it would be accepting donations — and matching them up to $25,000 — for the Lompoc Comm…

The committee behind the proposal to upgrade and remodel Lompoc’s Huyck Stadium provided some encouraging news Tuesday to local school leaders.

Tom Blanco, a trainer and PE teacher at Lompoc High School, speaks to the Lompoc Unified School District Board of Education on Tuesday night about the benefits of remodeling Huyck Stadium. He is joined by Ashley Costa, center, the executive director of the Healthy Lompoc Coalition. At left is Shirley Edwards, an assistant to LUSD Superintendent Trevor McDonald.

Ashley Costa, the executive director of the Healthy Lompoc Coalition, speaks to the Lompoc Unified School District Board of Education on Tuesday night about the benefits of remodeling Huyck Stadium.