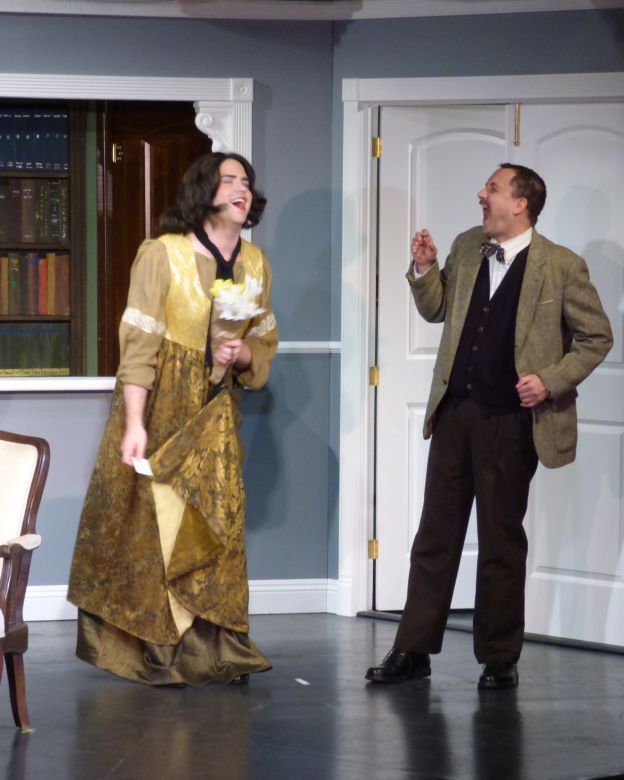 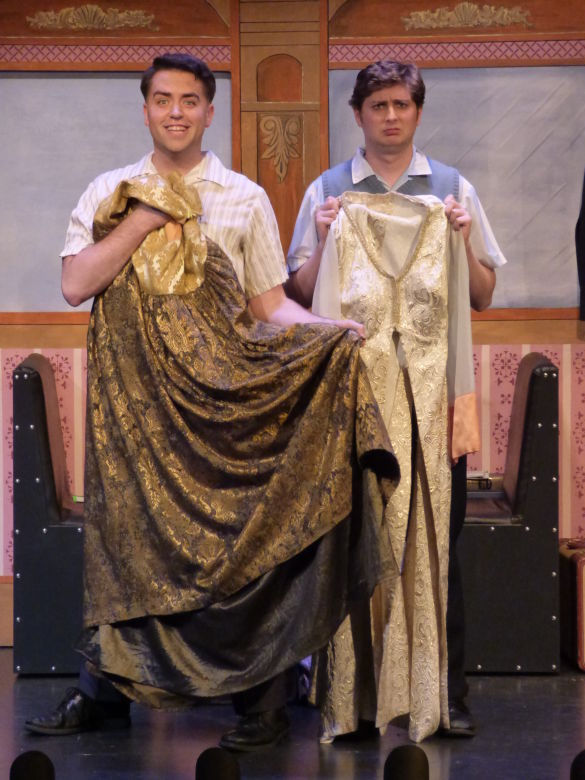 Leo Clark as Sam Hartley, left, hatches a plan to masquerade as women to try to receive an inheritance, much to the consternation of his best friend Jack Gable (Toby Tropper) in Ken Ludwig’s "Leading Ladies," now playing at The Great American Melodrama in Oceano. 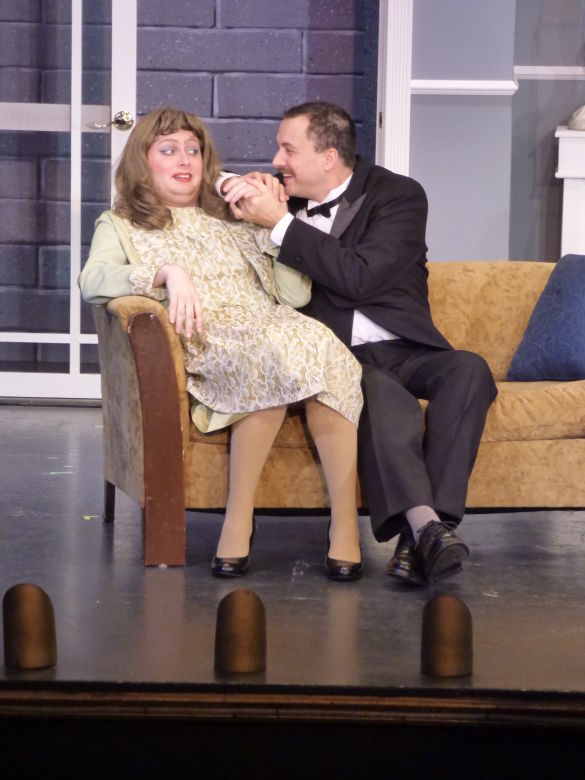 Jack Gable (played by Toby Tropper), masquerading as Stephanie, left, is surprised to find himself fending off the advances of Doc Myers (Andy Babinski) in Ken Ludwig’s "Leading Ladies," now playing at The Great American Melodrama in Oceano.

Playwright Ken Ludwig is a popular writer who regional theater companies love. He has written Tony Award-winning plays, including "Lend Me A Tenor" and "Crazy For You," and several that have been performed at the Great American Melodrama in Oceano.

The latest production at the Melodrama is "Leading Ladies," a very funny and entertaining farce. The play tells the story of two down-on-their-luck Shakespearean actors who are down to their last dollar.

The year is 1958 and on a train trip from York, Pa., where they last performed, they learn that an old woman is close to death and wants to leave a bulk of her money to a pair of relatives who live in England.

The two come up with a scheme to pretend to be the relatives, but after deciding to pull the scam, they learn that the relatives are actually a couple of nieces, not nephews.

The two decide to continue the scam, and then all the craziness ensues.

Sam Hartley is Leo Clark and Toby Tropper plays Jack Gable. Hartley, a newcomer to the Melodrama, is hysterical, playing his female role of Maxine with lots of gusto. Tropper is right there with Hartley, playing the shy Stephanie, who is deaf and dumb.

Sierra Wells plays Meg, one of the the old lady's nieces, who is more than happy to share the inheritance with her cousins from England. Wells is very good as the enthusiastic young lady. In an outfit that reminded me of June Cleaver in "Leave It To Beaver," right down to the pearl necklace, Wells is very cute playing the young dreamer.

One secondary plot is Meg's obsession with Shakespeare, and she is a big fan of Leo Clark.

Alex Sheets is quite funny as Duncan, pastor of a local church who is engaged to Meg. He does not believe that the two cousins are who they say they are and plots to expose them.

As a friend of the family, Maggie Siegrist is a riot as Audrey and she steals each scene she is in. Played as an outrageously crazy nit-wit, Siegrist is completely dedicated to making Audrey as far out there as she can.

Babinski has returned for a run at the Melodrama after performing there over 10 years ago and he is very good as the wacky doctor.

Several times Doc pronounces that Florence is dead, only to have her wake up. That is a very funny running gag and the final time he says she is gone, Hildebrand utters one of the funniest lines in the play.

Doc becomes enamored with Stephanie, who is taking a liking to Audrey, while Maxine begins to fall for Meg, who has a crush on Leo.

As a farce, "Leading Ladies," masterfully directed by Eric Hoit, works on every level. The characters are played in a broad comedic style and each actor does a wonderful job.

The set design by Brian Williams is perfect for the comings and goings throughout the play.

"Leading Ladies" has quickly become one of my favorite Ludwig plays and it should not be missed.

Following "Leading Ladies," is the vaudeville review called "Flyin' High." Directed by Hoit, with musical direction by Kevin Lawson and choreography by Hoit and Leah Kolb, the revue looks at several aspects of flight, including a nice opening number about kites and finishing off with human flight in a mash-up of "Peter Pan" and "Annie."

There are several nice numbers, one which incorporates a nod to Broadway superstar Idina Menzel and two of her most popular songs.

Ticket prices range from $19 to $24 with discounts for children 12 and under, seniors 62 and over, students 13 and over and active military.

Reservations can be made at the box office from 11 a.m. to 6 p.m. Tuesday through Saturday and noon to 5 p.m. Sunday, by calling 489-2499 or online at americanmelodrama.com.

Rolling Stones threaten to sue Trump over using their songs

Colin Kaepernick is joining with Emmy-winning filmmaker Ava DuVernay on a Netflix drama series about the teenage roots of the former NFL player’s activism.

Broadway shutdown due to virus extended again until January

NEW YORK (AP) — The shutdown on Broadway has been extended again — until at least early January.

Sunday's Astrograph: Looking for a little guidance? It's in the stars

Look beyond petty differences this year. A positive attitude will get you far, both personally and professionally. A self-critique will lead to personal growth and a triumphant makeover that encourages you to be your best and will bring out the best in others. The possibilities are endless, and the results will be outstanding.

Saturday's Astrograph: Looking for a little guidance? It's in the stars

If you adopt change instead of fighting it this year, you'll surpass your dreams. Choose to take the road less traveled, and you'll be surprised by the opportunities that unfold. Stability, security and happiness will grow if you let your intelligence and emotions guide you this year.

RIO RANCHO, N.M. (AP) — Rudolfo Anaya, a writer who helped launch the 1970s Chicano Literature Movement with his novel “Bless Me, Ultima,” a b…

Leo Clark as Sam Hartley, left, hatches a plan to masquerade as women to try to receive an inheritance, much to the consternation of his best friend Jack Gable (Toby Tropper) in Ken Ludwig’s "Leading Ladies," now playing at The Great American Melodrama in Oceano.

Jack Gable (played by Toby Tropper), masquerading as Stephanie, left, is surprised to find himself fending off the advances of Doc Myers (Andy Babinski) in Ken Ludwig’s "Leading Ladies," now playing at The Great American Melodrama in Oceano.