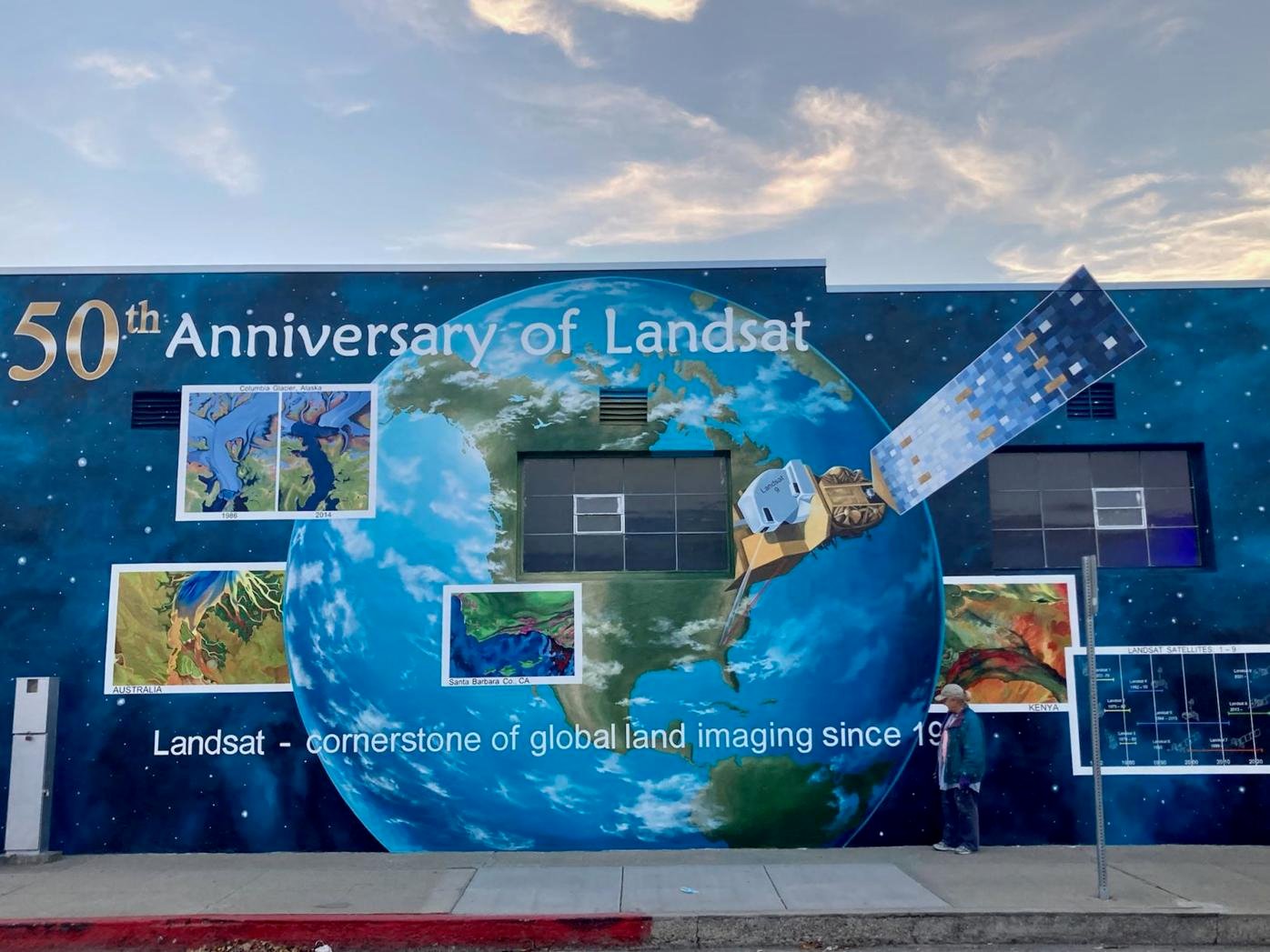 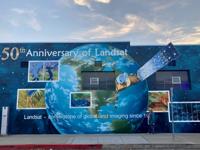 The Landsat mural in downtown Lompoc. 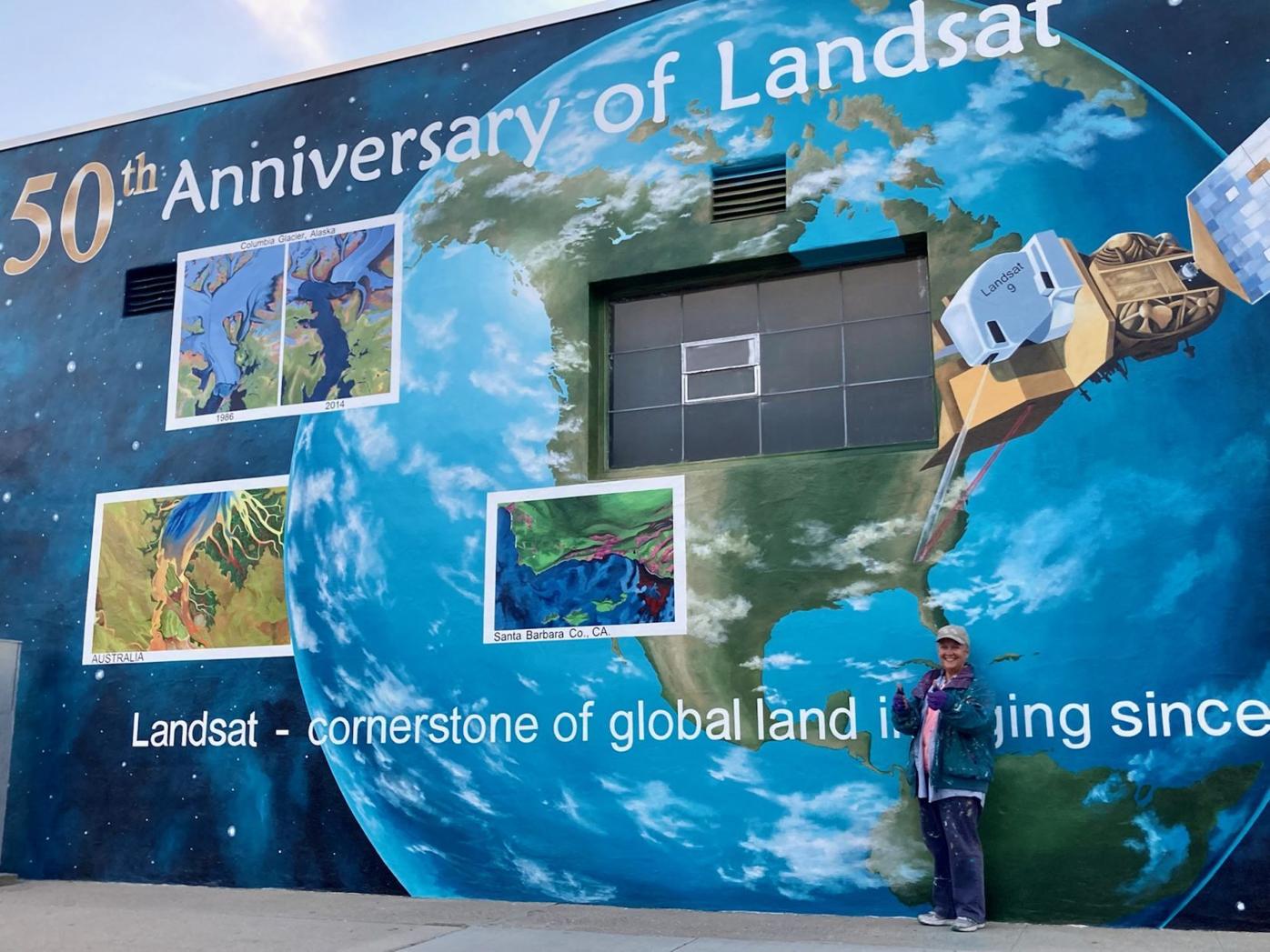 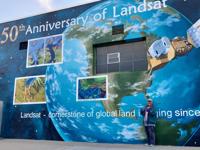 Ann Thompson gives two thumbs-up in front of the mural she completed in downtown Lompoc commemorating the 50th anniversary of the Landsat program. 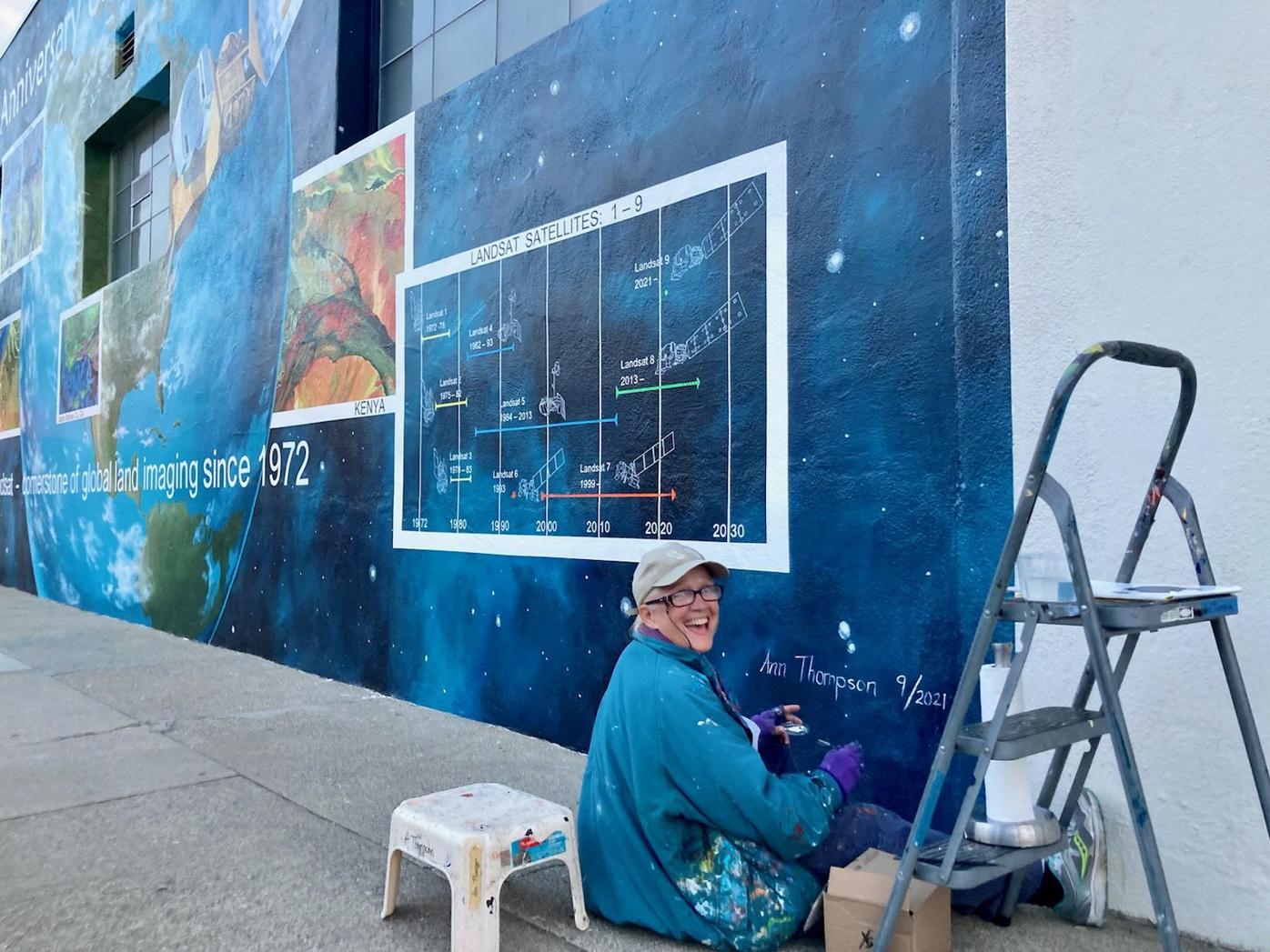 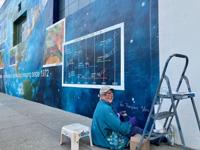 Ann Thompson, curator for the Lompoc Mural Society, signs the righthand side of the mural she completed in downtown Lompoc to mark the 50th anniversary of the Landsat program. 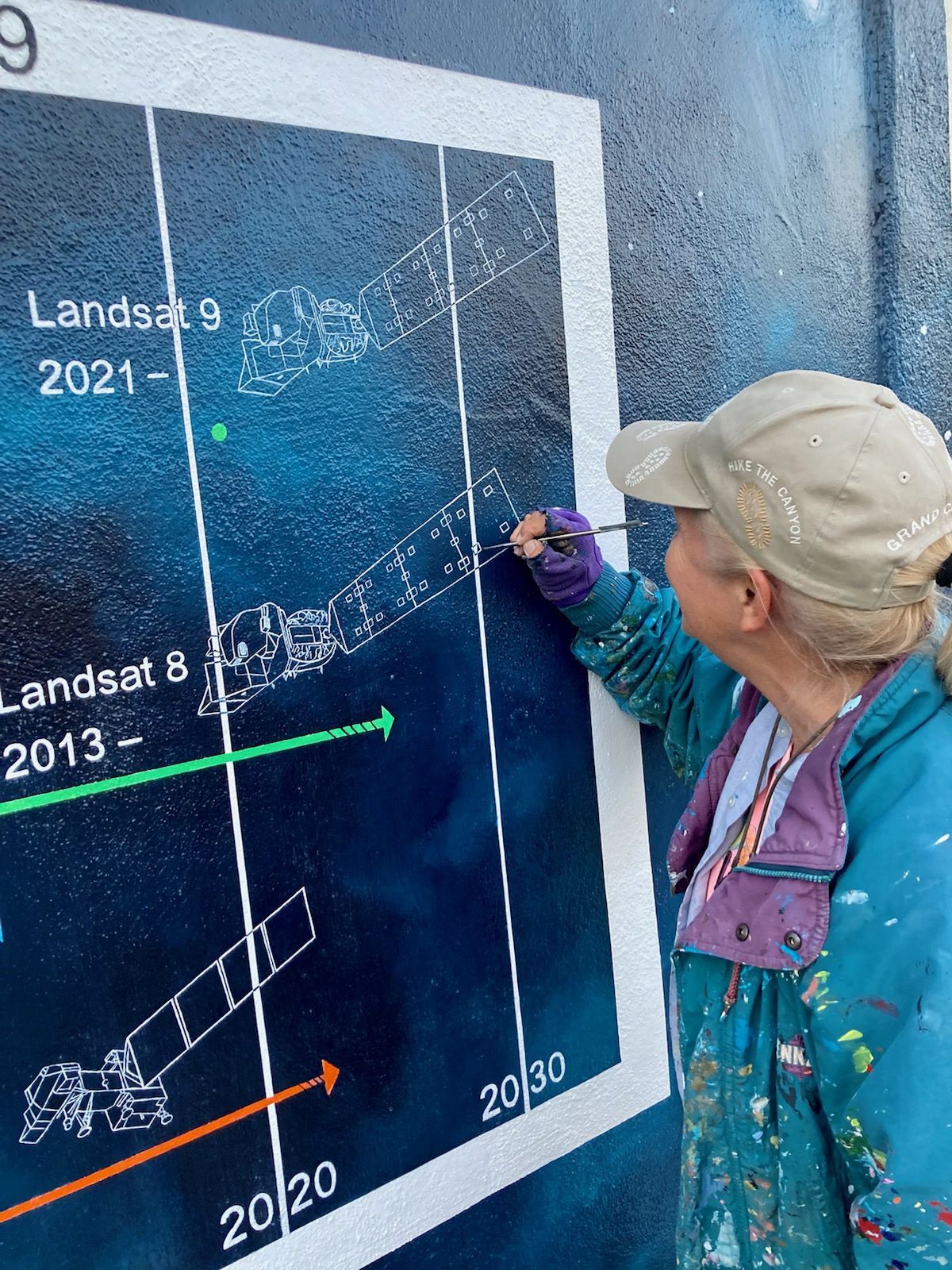 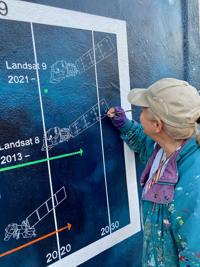 Ann Thompson makes the final brush strokes on the Landsat mural located on I Street in downtown Lompoc.

Bundled in a coat and a pair of gloves splattered with paint, artist and Lompoc Mural Society curator Ann Thompson held a thin paintbrush and carefully applied the last lines of black paint to the solar array panel of a small satellite depicted on the giant Landsat mural located on I Street and Ocean Avenue in downtown Lompoc.

"I'm really proud of the way it turned out," said Thompson, standing back in the twilight hours of the day and eyeing the final details before signing the righthand corner and calling the mural project officially complete.

Thompson wrapped up the project on Sept. 4, weeks ahead of the NASA and USGS Landsat-9 satellite scheduled to launch from Vandenberg Space Force Base on Sept. 23.

Both the mural and the upcoming launch coincide with the 50th anniversary of the Landsat program, established in 1965 by William Pecora, director of the U.S. Geological Survey.

The eight Landsat satellites sent into orbit since 1972 are credited with providing the longest continuous record of Earth’s land surface from space. The data received is used by countries around the world to gain a deeper understanding of environmental change, respond to natural disasters and even forecast future crop production.

Thompson was informed on April Fools' Day that NASA had chosen her Landsat anniversary illustration among at least a dozen other contestants from as far away as Oregon.

"I thought, 'Is this a joke?'" she said, recalling her surprise to the news on such a notable day.

According to Thompson, NASA had provided a list of key elements to be included and left it up to the contestants to produce their own iteration of the commemorative Landsat mural. Thompson's won out.

"I really like the abstract part," she said, pointing to the painted pullout boxes of the mural that illustrate topographic imagery taken by Landsat satellites in various regions of the world. "But I love it all."

Coming to terms with the end-of-the-summer project — one that took everything, she said — Thompson looked back on the many hours invested each day over the last three months.

Thompson recalled the moments where her body would ache, forcing her to turn to stretching, chiropractic work and Epsom salt baths.

"There were times I was like, 'Oh, Lordy, and we're just getting started," she said, laughing.

With the help of local businesses Sunbelt Rentals, which offered a scissor lift for reaching high places where the use of a traditional scaffolding "would have been too dicey," and Hot Wire Foam Factory, which provided materials that enabled her to integrate a large wall vent into the mural itself, Thompson said the end results are flawless.

She also credits her husband for helping to paint the Landsat 9 satellite's array that stretches out to the highest point of the wall, and for inspiring the central piece of the mural — an oversized painting of the Earth.

"This [project] had been consuming and my husband has been such a trooper," she said. "I'd get home on a average of 8 or 8:30 at night — when the light is gone, that's when I'd be home. He'd have dinner ready and we'd eat late. I mean, he was amazing."

Most of all, the positive reaction from the community is what spurred her on each day, she said.

"It didn't matter what the age of the person was; I had children in the back seat of cars as parents would drive by. The parent would let the child roll down the window, and you could hear, "Mommy, Mommy, look!"

"I'd turn and they'd wave at me," Thompson said, adding that passersby would regularly drive by and honk as a means of encouragement.

"Even teenage boys walking down the street — I would turn around and look and they'd say, "Good job!"

"I mean, from a teenager, you know?" Thompson said. "I'm just very pleased."

Ahead of the scheduled Sept. 23 launch, NASA, USGS and Explore Lompoc are co-hosting Launch Week, a set of community events geared toward educating the public:

For more details about the launch and scheduled activities, go to explorelompoc.com/landsat.