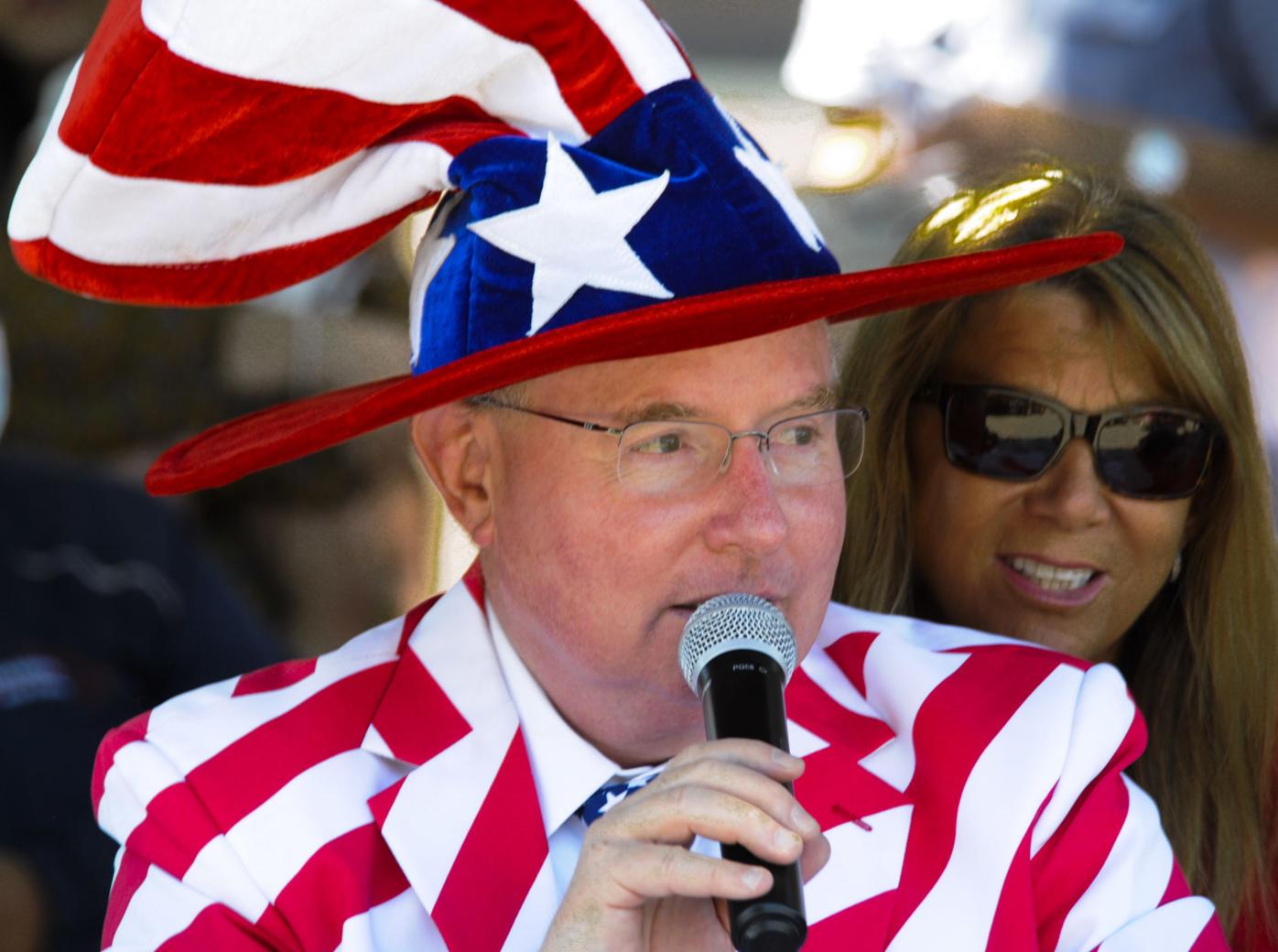 Allan Jones describes the action for the audience during Solvang’s annual Fourth of July parade on Sunday. 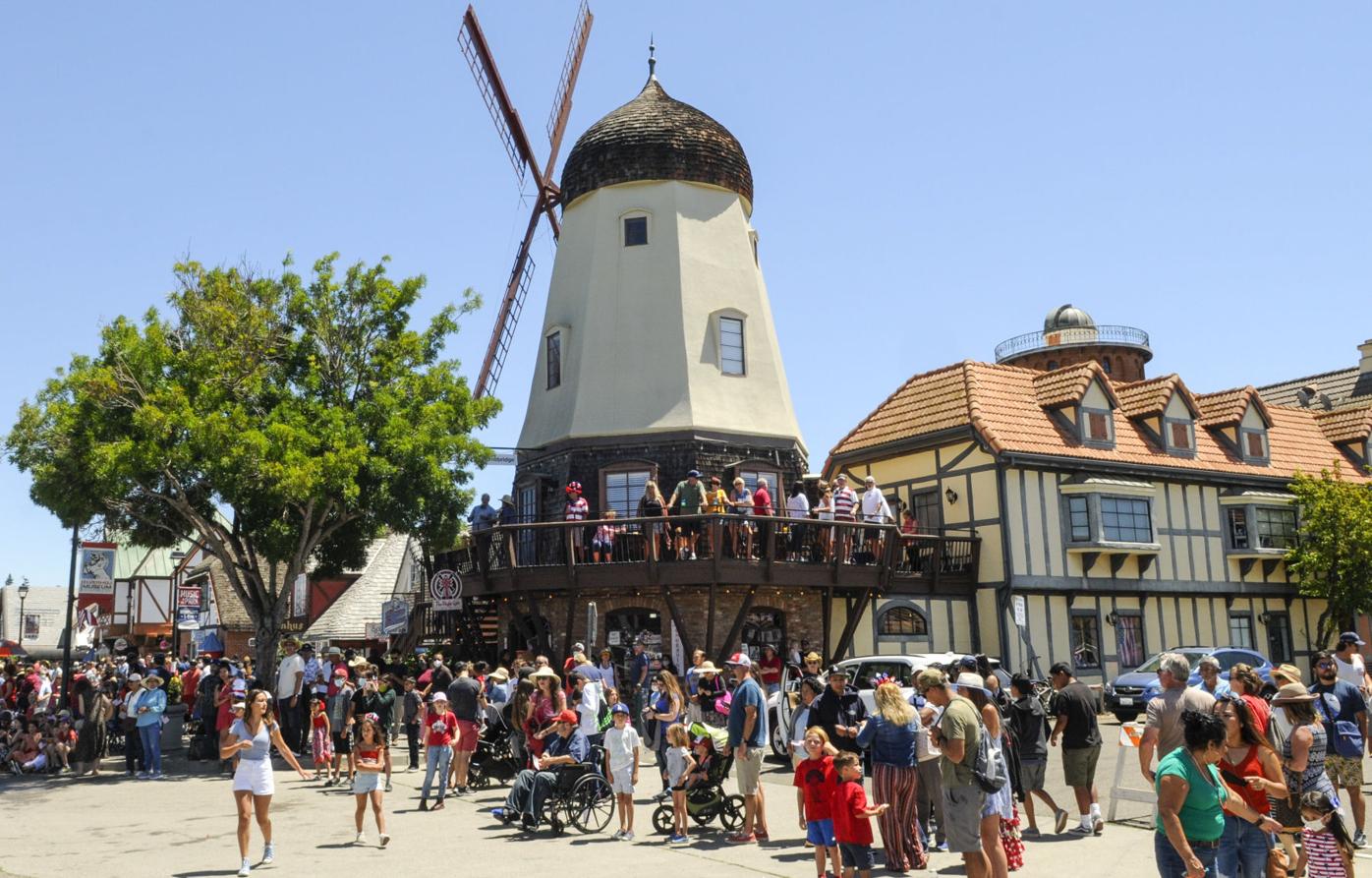 Never short a joke or quip, Jones, who is the president and principal broker at Santa Ynez Valley Real Estate Co. in his off time from the parade, admitted that although his role as announcer is to introduce and broadcast the festive parade and its entrants as they file through downtown Solvang, he can't help but strive for a few good laughs.

"It's a fun crowd to be in front of," he said, explaining that his aim is to draw laughter from the audience and spark interactions between spectators and parade entrants.

Jones remembered when he was first asked to fill the role in 1996 as a newish member of the Rotary Club of Solvang. He had little experience emceeing large events, leading to a case of nerves before the town parade. Those nerves over the years, however, eventually settled and morphed into decades of enjoyment.

"I've also done parade announcing for Danish Days whenever they ask me," said Jones, noting that his volunteering has become a sort of cost-free side gig that puts him in front of local crowds on a regular basis.

"I don't mind doing it," Jones added. "I think they ask me because they like my price."

In 1996, when the coordinating committee for the Fourth of July parade could no longer sponsor the annual event, Solvang Rotarians Greg Welton and Chuck Pira volunteered to take it over.

"Then they asked if I would do the announcing. I guess they figured I'd be dumb enough to do it," Jones said, laughing.

In the beginning, Jones said the group just "ad-libbed it," and now the production has become a well-organized event that includes thoughtful, prewritten stories for each parade entrant.

"We all just kind of winged it, and now it's become a big thing," he said.

Over the last 25 years, the Rotary Club of Solvang has continued to sponsor the annual event that brings thousands to town to delight in the prancing horses, floating Viking ships, twirling groups and marching bands.

"Our club pays for everything," Jones said. "It's our gift to the community."

The annual Fourth of July parade has welcomed as many as 10,000 spectators and has featured as many as 80 parade entries, Jones said.

"When the parade first started, it was so small," he said. "We went around twice so no one would leave."

Now, it's not uncommon for crowds to be five to six people deep, Jones said.

Each year and ahead of his day of announcing, Jones readies his patriotic costume, complete with an standout, oversized red, white and blue hat that sometimes slopes to one side.

"[My clothing] seems to get more obnoxious every year," he said.

His fondness for celebrating July 4 was inspired by his late father, George Jones, who loved the holiday. The day remains an important event attended by family members, including his mother, Sally Jones. "I wouldn't be here if it wasn't for her," Jones said.

Next year and years into the future, Jones plans to take the mic at Solvang's Fourth of July event to continue celebrating the United States and the community he has called home since 1965.

The parade will file down a different route than years past due to the unavailability of State Route 246, explained parade chairman Steve Palmer of the Solvang Rotary Club.

Applications for the 2021 Danish Days Maid are currently being accepted through July 15.

Electric trolleys, parking solutions on their way to Solvang

Electric trolleys are heading for the streets in Solvang, Copenhagen Drive will remain a pedestrian precinct until at least October, parking meters may be on their way to town, and COVID-era signage will come down by the end of July as community opening continues, Solvang City Council members decided Monday.