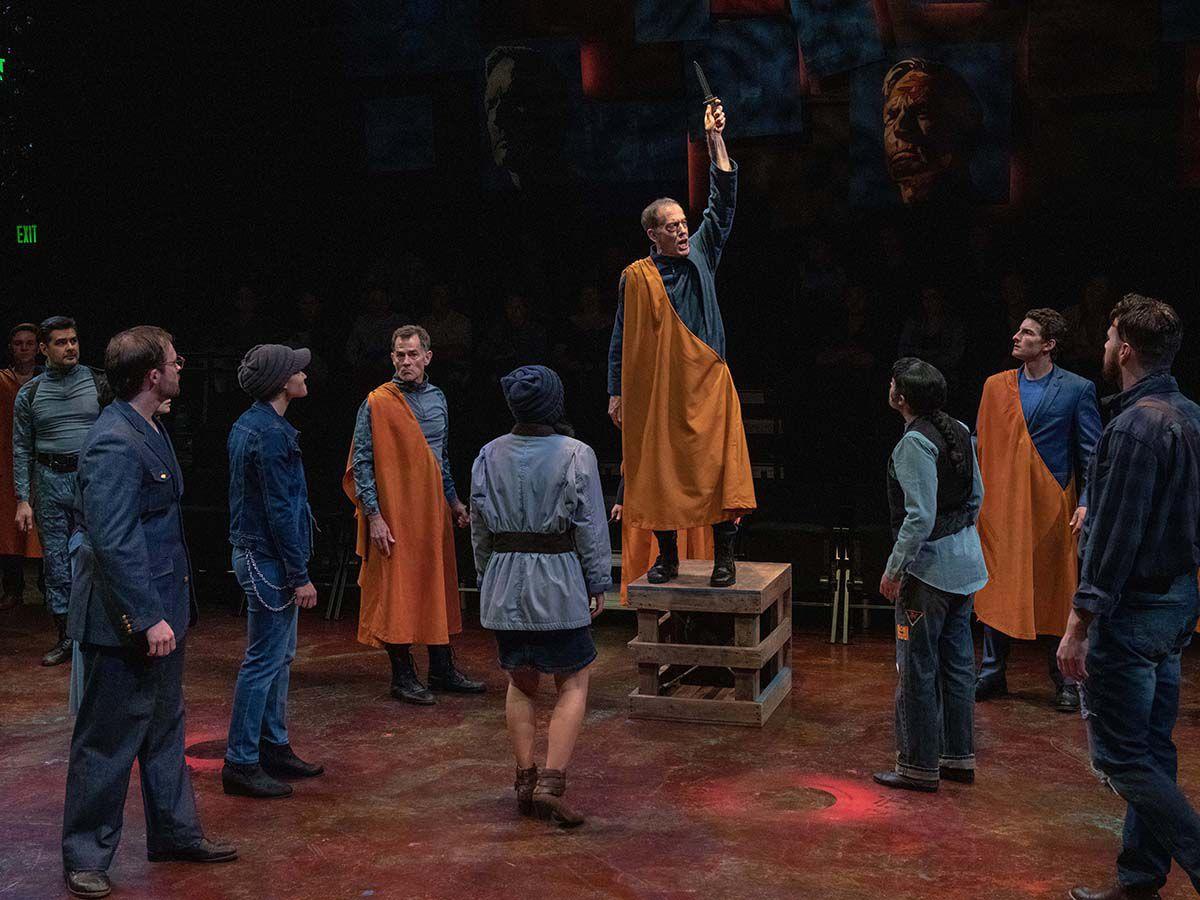 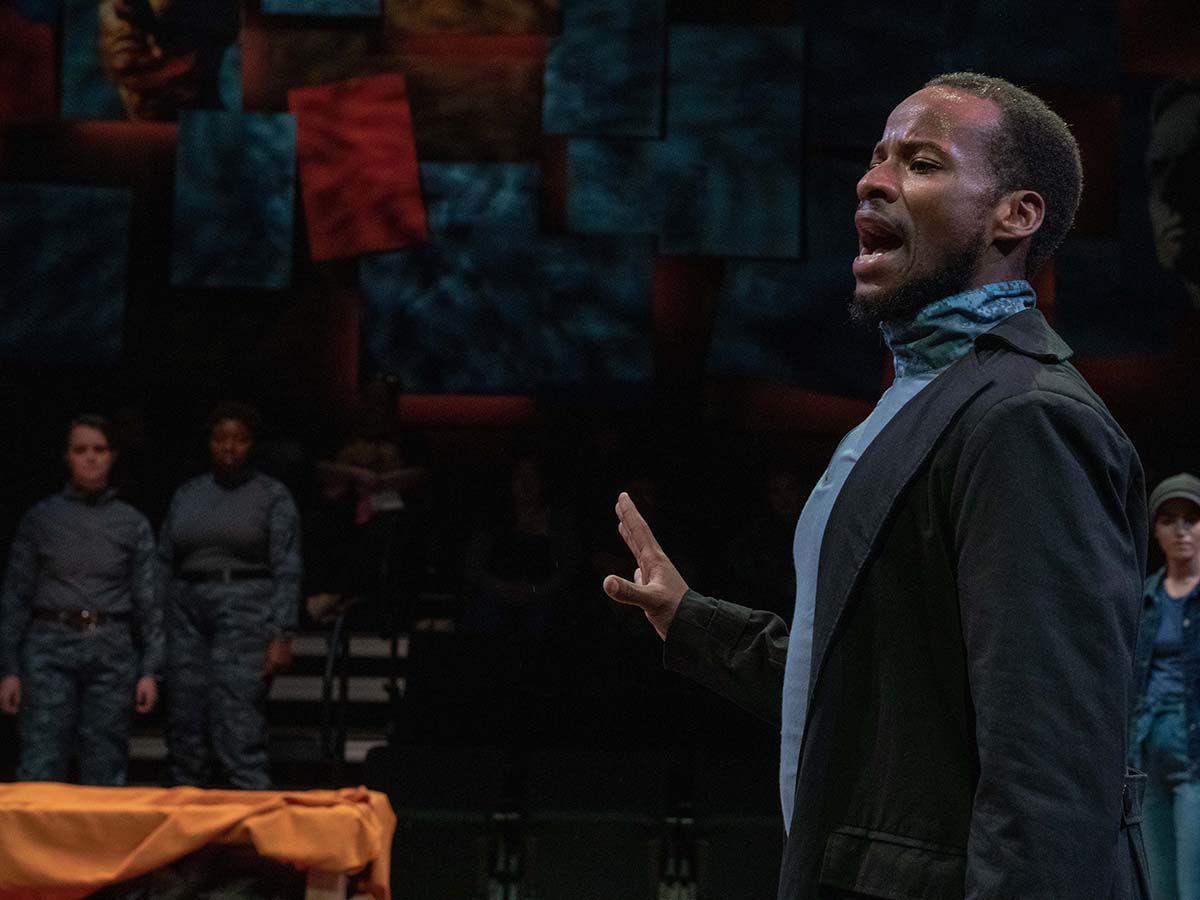 Last year, a fictionalized William Shakespeare visited PCPA in the comedy “Shakespeare in Love” Now, the real Bard returns and shows his darker side in their production of “(The Tragedy of) Julius Caesar.”

Popular politician Caesar seems dangerously close to turning the Roman Republic into his own personal empire. A group of senators plots to assassinate him before this can happen. Chief conspirator Cassisus tries to convince Casesar's friend Brutus to join them. Casear gets the title, but this is really 'The Tragedy of Brutus,” focusing on his moral quandaries and conflicted relationships. Shakespeare's wit provides the only relief from the play's ominous tone.

Befittingly, director Mark Booher has staged a stark, grim production in the Severson Theatre. It's easy to imagine this story playing on a larger stage and being swallowed by the trappings of an epic. Here, a group of desperate men gather in a small room, with us.

Set designer Abby Hogan makes excellent use of the intimate space. Hanging from the ceiling, there's an upside-down statue of Caesar, crumbling pillars, and figures that resemble wrapped bodies dangling from ropes. Giant portraits of Caesar adorn the walls. Even the table that the conspirators sit around is represented by a crate filled with statues of writhing, tormented people.

If you aren't already feeling the creepy atmosphere, Mitchell Hampton's sound design should bring it on. “Friends, Romans, countrymen,” lend your ears to the sounds of war drums, angry mobs, eerie voices and crashing thunder.

Lighting designer Jennifer “Z” Zornow provides lightning to go along with that thunder.

Given the modern trappings, some will probably draw parallels between the story and current events. (That may be the intention of PCPA's creative team.) However, Shaekspeare's plays are timeless -- they can seem as if they're meant to apply to any time period they're performed in.

The cast brings out the poetry in Shakespeare's language. (Dramaturg/text coach: Emily Trask.)

Peter S. Hadres is an ideal choice to play the quietly intense, contemplative Brutus. Likewise for Andrew Philpot as Cassius, who charms whether he's being scheming or sincere.

In the title role, Michael Tremblay gives weight to the name “Caesar” when he dramatically talks about himself in the third person.

There are two standout scenes of domestic drama that help humanize the political story: one with Brutus and his wife Portia (Emily Trask), and another with Caesar and his wife Calpurnia (Leah Anderson). Calpurnia's impassioned pleas for Caesar to stay home and her silent resignation when he refuses are especially chilling. The wives never come back into the plot, but both Trask and Anderson leave an impact.

Playing Caesar loyalist Marc Anthony, Yusef Seevers' style can seem a bit stagy next to the more low-keyed Hadres and Philpot. However, he makes a menacing impression when he delivers Anthony's reverse-psychology-laden eulogy for Caesar.

Tragic hero Brutus inevitably meets a tragic end. The scene's performed well, but the darkness of the production is so constant, it feels more like a foregone conclusion than a tear-jerking shock.

The production's well-done, if a bit of a downer, but that's the nature of the piece. They can't all be lighthearted comedies.

“Julius Caesar” will run through March 22nd at PCPA's Severson Theater, located on the Allan Hancock College campus, at 870 S. Bradley Rd. Tickets are $33.50 - $50 (student/child/senior discounts available) and can be purchased at the box office or through pcpa.org. For more information, visit the website or call (805) 922–8313.

All performances will feature a prologue 30 minutes before curtain. Performances on March 13th and 20th will also feature a “Talkback” Q and A session following the performance.

“Julius Caesar” will run through March 22nd at PCPA's Severson Theater, located on the Allan Hancock College campus, at 870 S. Bradley Rd. Tickets are $33.50 - $50 (student/child/senior discounts available) and can be purchased at the box office or through pcpa.org. For more information, visit the website or call (805) 922–8313.

The mask exhibition features the works of 14 artists.