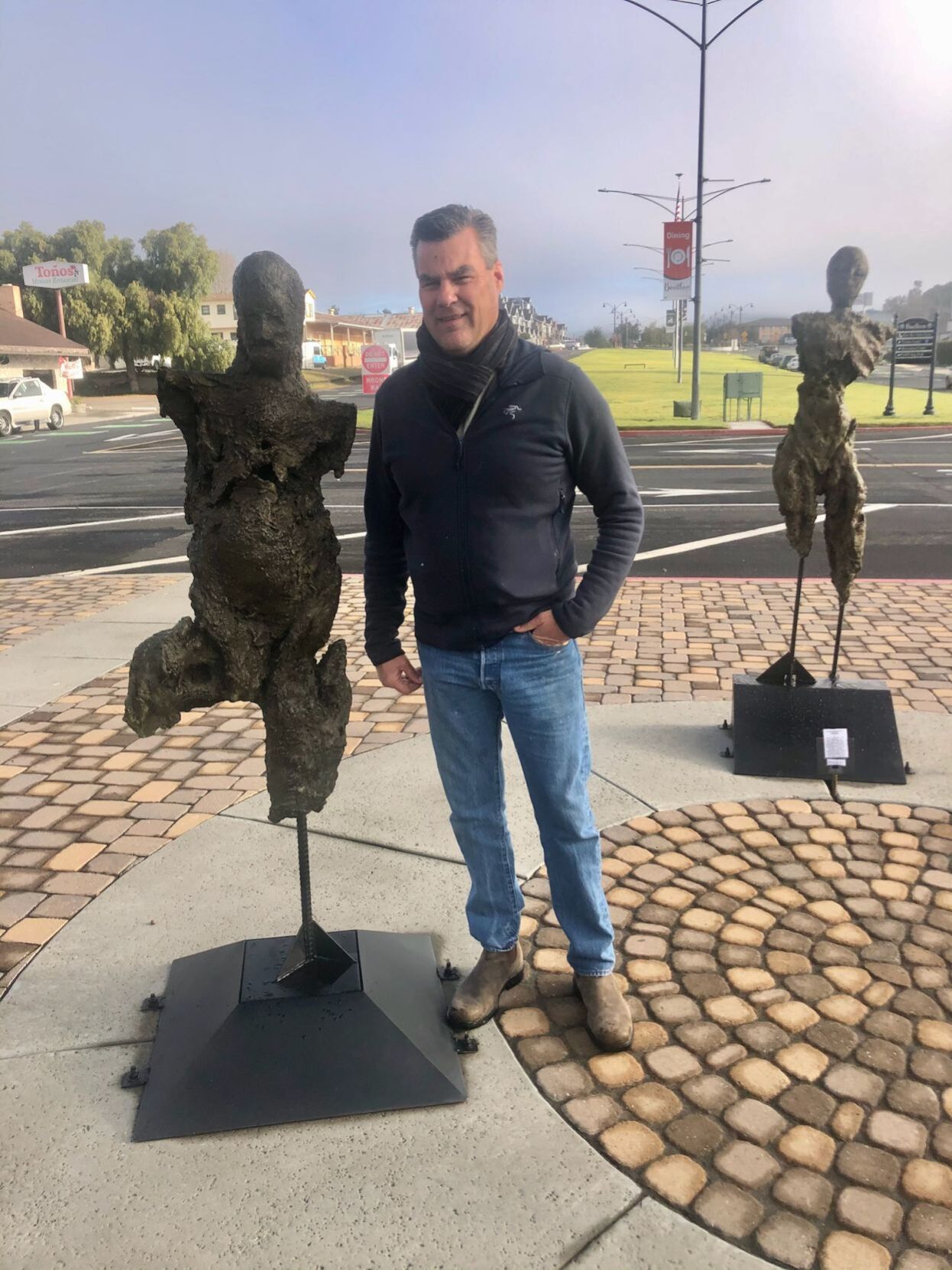 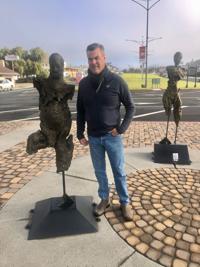 Local artist Joe Castle stands near two of three bronze sculptures titled "A Conversation About A Nightingale" currently on display at the statue median of Buellton's Avenue of the Flags. 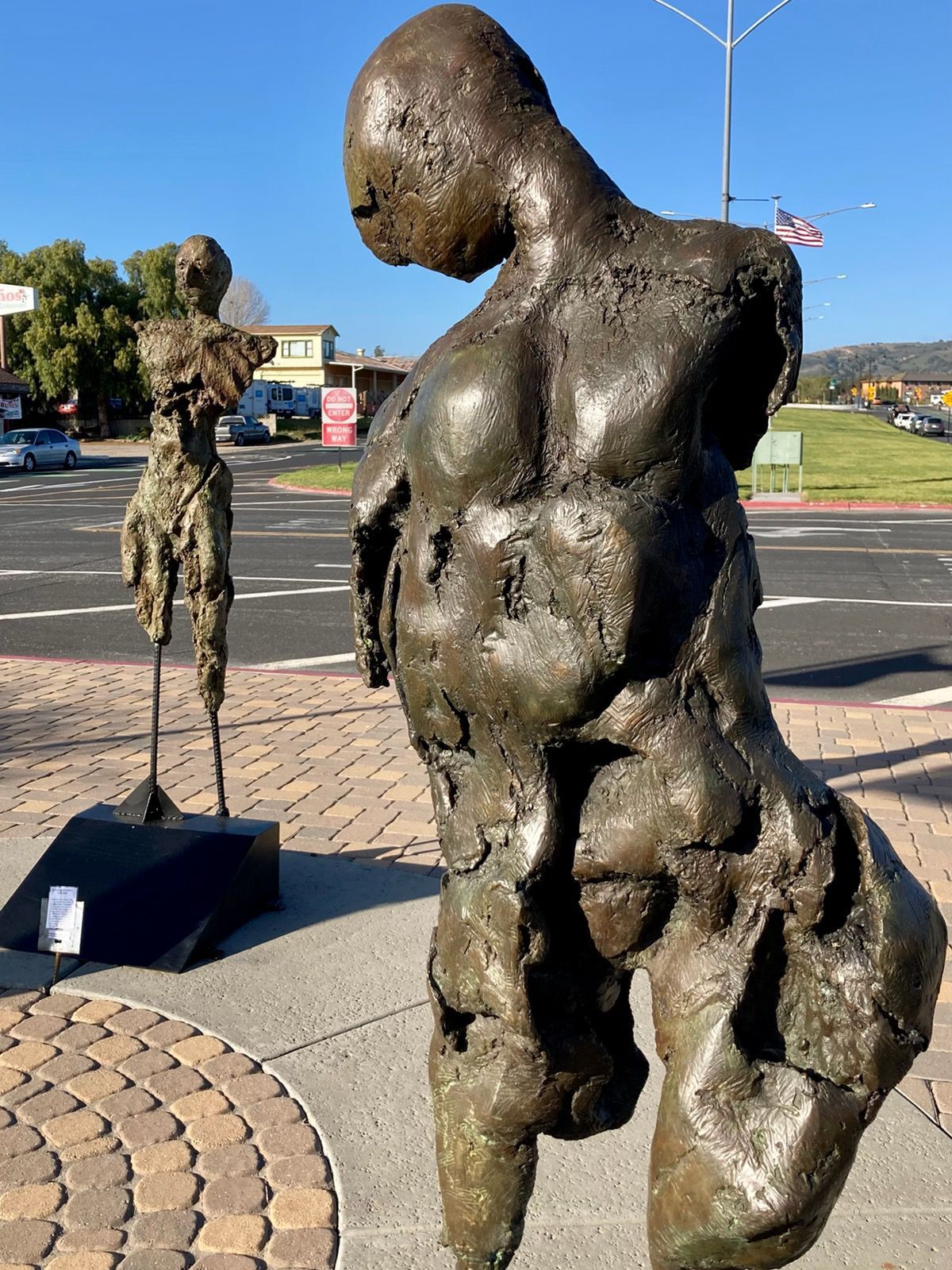 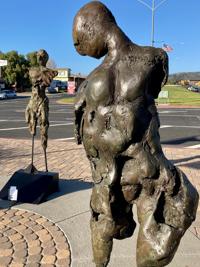 A five-piece bronze sculpture exhibit "Intimate Stranger" is currently on display at the statue median of Buellton's Avenue of the Flags. 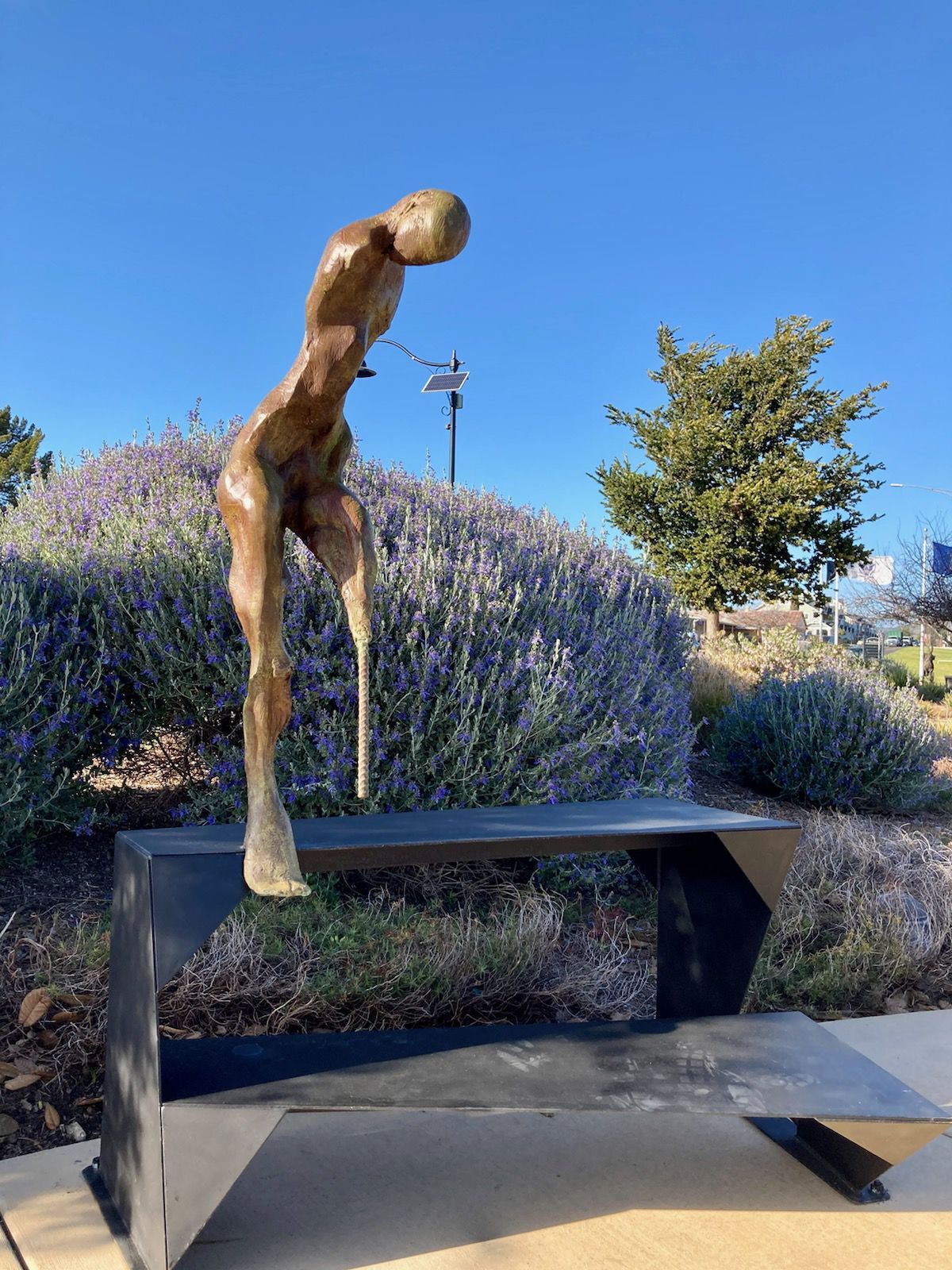 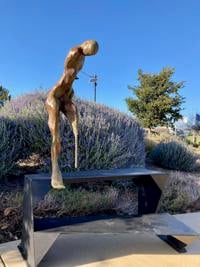 Bronze sculpture "Down by the River" shows the individual shedding his past existence by stepping into a new life with the use of a prosthetic leg. 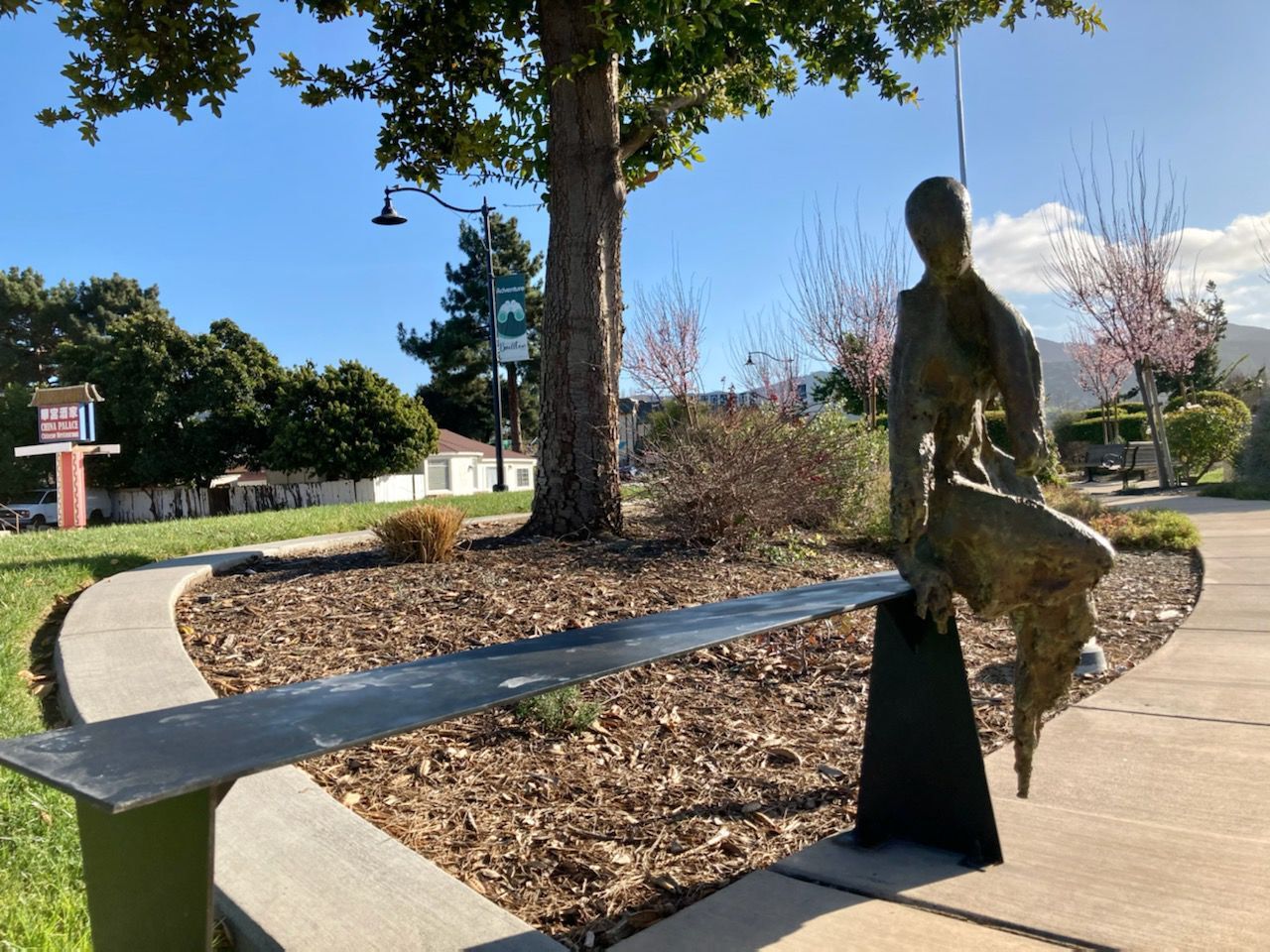 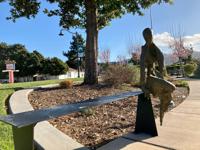 One in a series of bronze sculptures by local artist Joe Castle, "Meet me at the Mountaintop," shows a woman seated with the ground below her, representing a spiritual high ground achieved. 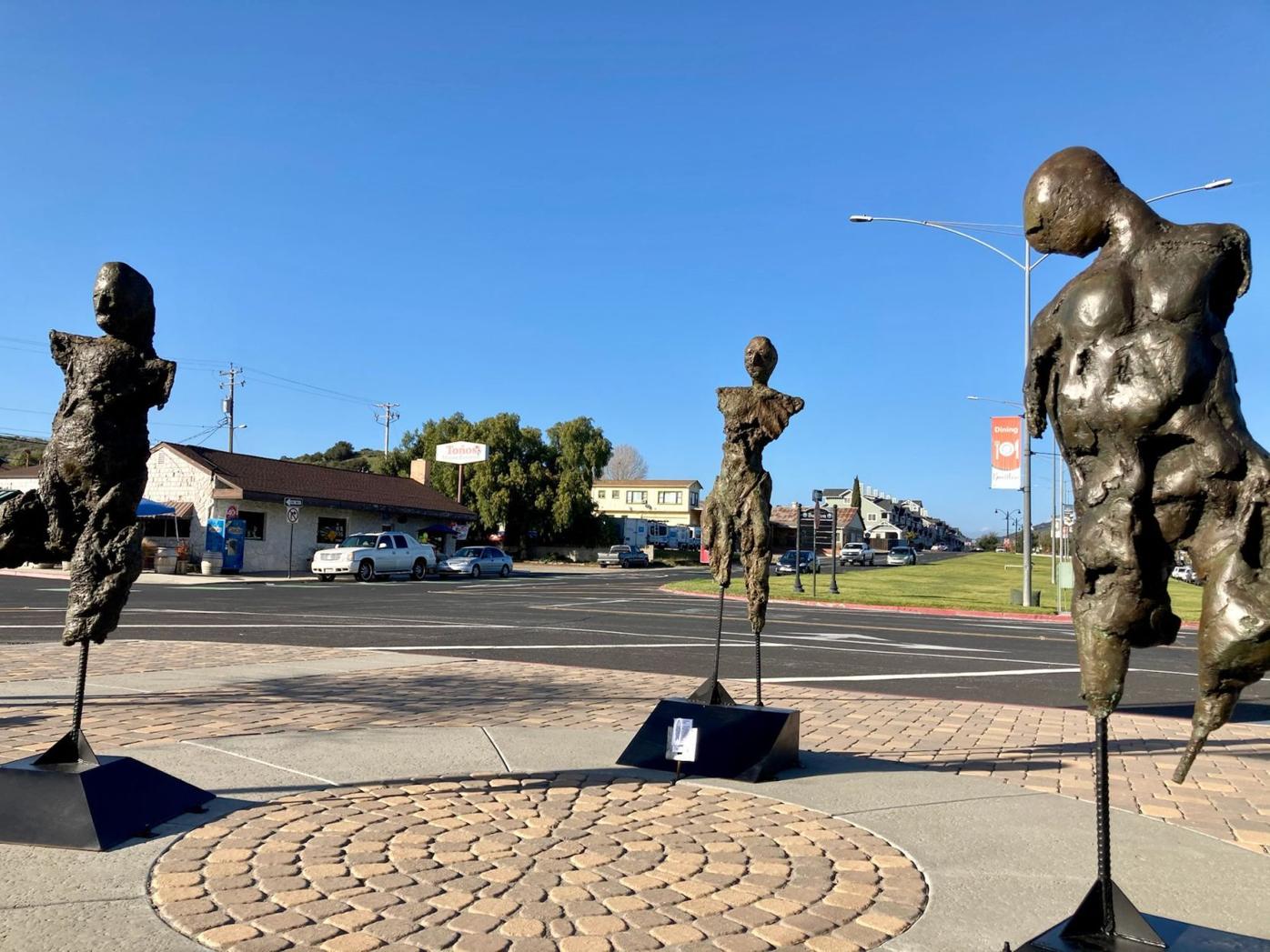 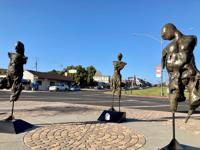 Bronze sculptures currently on display on the Statue Median of Buellton's Avenue of the Flags include a collection titled "A Conversation About A Nightingale," which shows three disfigured individuals conversing about their mortality.

Breathing life into art is a full-time job for Santa Ynez Valley sculptor Joe Castle, who for nearly 30 years has cast his personal journey onto his life-sized bronze works.

Five of those bronze sculptures — an introspective inspired by Castle’s visit to Walter Reed National Military Medical Center where he witnessed the courage and perseverance of veterans recovering from injuries, many with missing limbs — are currently on display at the statue median of Buellton's Avenue of the Flags. The art exhibit is part of the town’s ongoing effort to enhance the artistic and cultural experience of the community.

Titled “Hero’s Journey: Intimate Stranger," the exhibit is part of a larger 12-piece sculpture series that took Castle over seven years to create, including the procurement of funds.

"I've had a varied selection of people think different things. Some think it's a depiction of people from the Holocaust," said Castle, referring to public reaction in the weeks since its March 1 installment. "I really just would like it to cause people to stop and ponder."

The culmination of powerful life experiences moved the artist to create the series, which took three months just to cast the bronze and one year to complete a single sculpture.

Exposed rebar is used specifically for each form as Castle said the material symbolizes living a raw and authentic life.

"As mechanical as we try to be, we’re really just organic matter," he said. "It's about being honest with oneself."

Around the same time he lost his father, Castle visited Walter Reed National Military Medical Center in 2013 as a guest and prospective artist to be commissioned. Although the opportunity never materialized, he left the hospital forever changed after a guided tour by a resident physical therapist.

“I saw appendages everywhere. [Veteran patients] would put their prosthetics in lockers to work on their core in rehab,” Castle said. “I think [the art series] best represents what I felt like when I was pushed to examine my inner world and depict what I saw at Walter Reed.

“It’s symbolic of life. If your core isn’t strong, your inner world is incongruent with your outer world. In other words, it might not bode well for you,” he said.

Castle considers the chance encounter at the hospital an honor that elevated his appreciation for those who have served and are currently serving in the U.S. military.

"Even when I lived in Idaho, there were many vets coming back from Iraq, afflicted," Castle recalled. "I noticed these soldiers were not getting the respect they deserved. It reminded me of Vietnam."

The five sculptures on exhibit include the collections "Meet Me at the Mountaintop," "Down by the River" and "A Conversation About a Nightingale."

"Meet Me at the Mountaintop" shows a woman sitting on a steel bench looking at the ground below that represents being seated at one's spiritual high ground. It is here that the land below becomes more evident and navigable, said Castle, noting that the figure's positioning suggests that a visitor is welcome to accompany her and converse.

"Down by the River" depicts an ailing figure shedding his previous existence by stepping down and into a new life with his prosthetic leg.

Lastly, the set of three disfigured bronze forms turned inward and facing each other are in discussion about their mortality. This particular collection is notably inspired by the poem "Ode to a Nightingale" by John Keats, according to Castle, which explores the themes of nature, transience and mortality, and rejects the conditional pursuit of pleasure.

“I really applaud Buellton and the arts commission for allowing me to display something so provocative,” Castle said. "I've always wanted to give back to the military because of my family — and family friends — who have served."

The exbibit will remain on display until Labor Day, Sept. 6.

Connect with the artist

Joe Castle invites the public to contact him to discuss the collection on display, to donate or to purchase. He can be reached at josephlcastle@me.com

To learn more about the artist and his works, visit castlesculpture.com

*A reception is being planned around Memorial Day. Details will be announced.

Chumash Museum and Cultural Center shaping up as construction continues