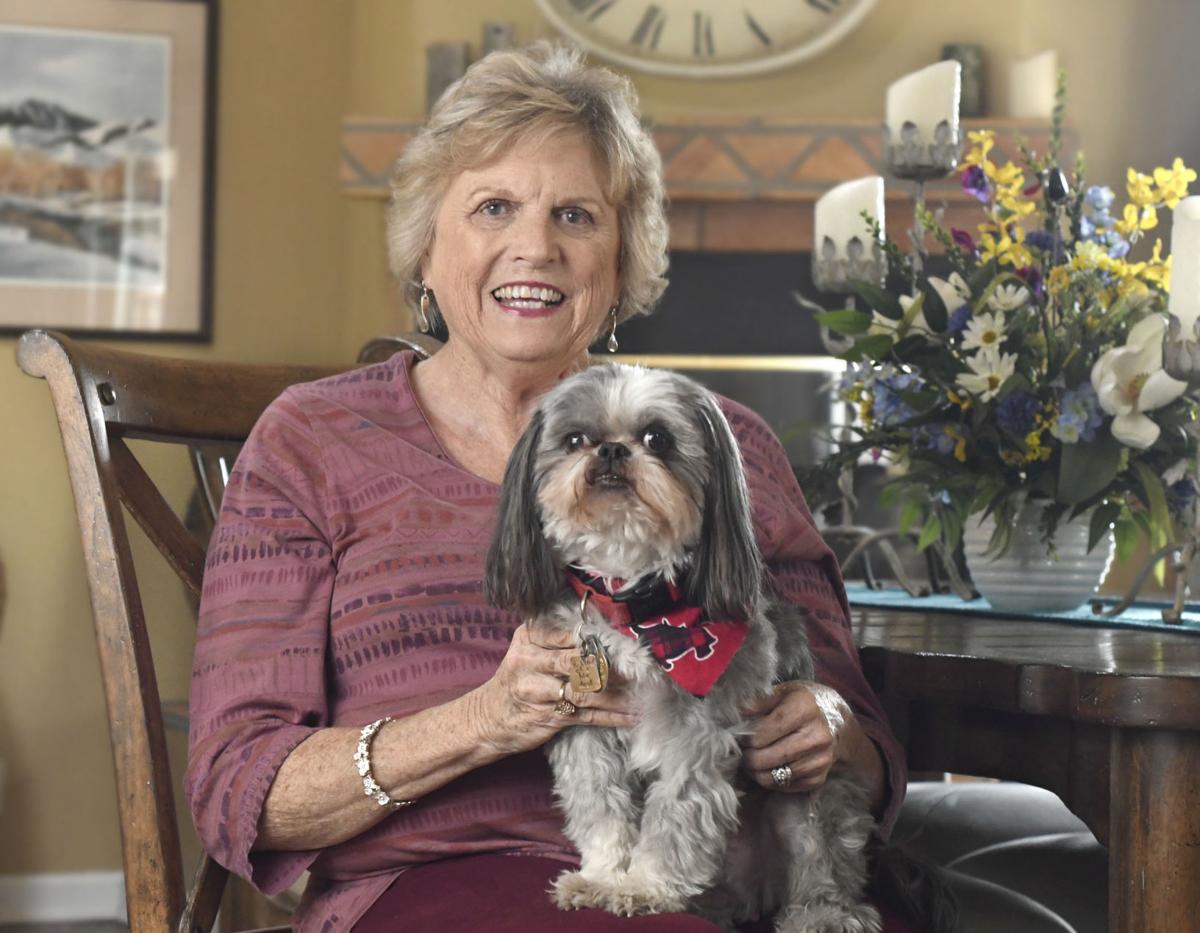 Diana Richardson, shown with her dog Mucho, has been named the Santa Ynez Valley volunteer of the year for seniors. 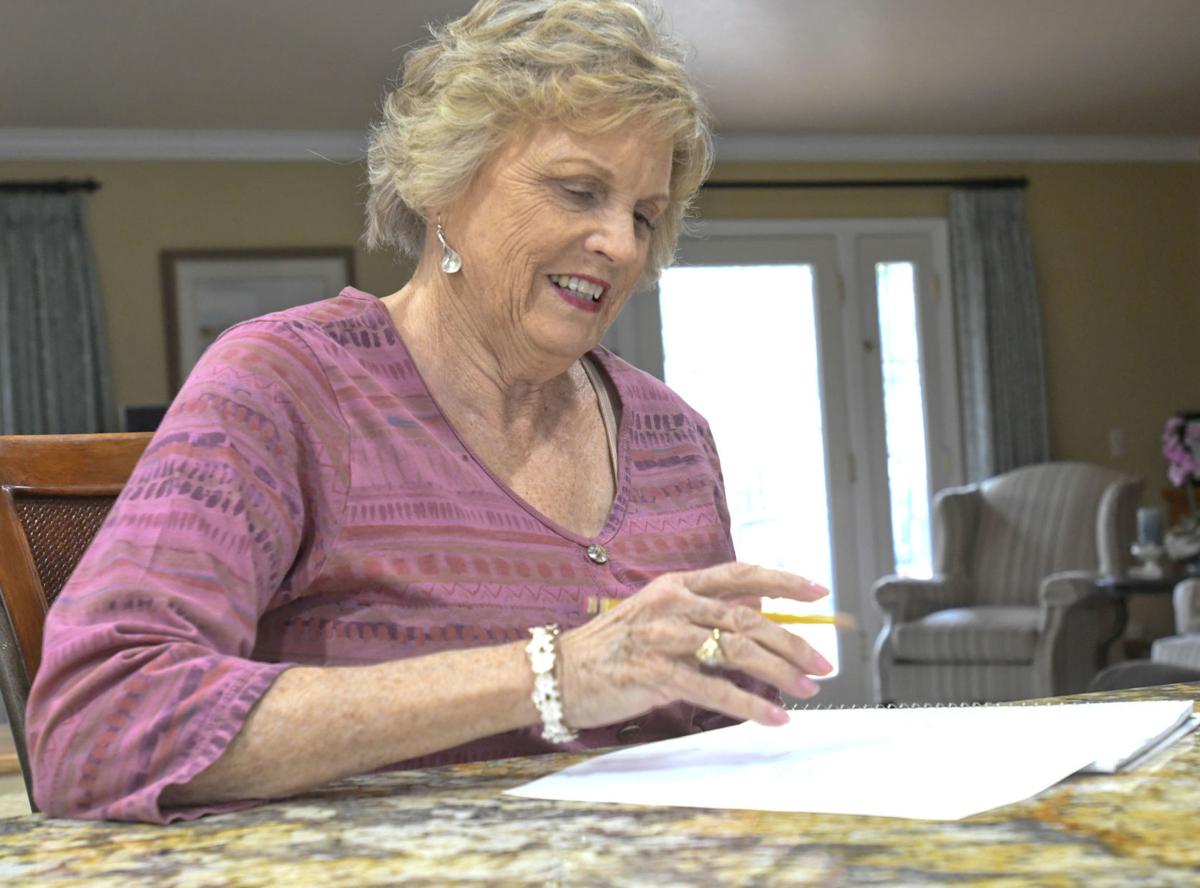 Diana Richardson works on paperwork at her Solvang home. She has been named the Santa Ynez Valley volunteer of the year for seniors.

Diana Steffensen Richardson was born to be a caregiver, and has trouble saying no to those in need, she said, especially after her personal battle with breast cancer.

Volunteering helped her get through that chapter in her life, she said, never expecting that her caregiving tendencies would lead her to becoming president of the Atterdag Village of Solvang Auxiliary.

Her four-legged co-pilot, Mucho, an 11-year-old pup, volunteers his time in a different way: with wags and snuggles.

“He’s become sort of an unofficial mascot and brings a smile to their faces. He’s a good boy,” Richardson said.

Having retired from the City of Solvang just over five years ago, she laughs, “I don’t feel retired. I’m there just about every day. Some residents ask, ‘when are you moving in?'”

Over the years, three of Richardson’s aunts and one uncle have enjoyed living at the facility, which influenced her to help with the growing needs of the local senior community. Her last surviving aunt resides there now.

Atterdag provides second-to-none care that aside from superb medical services, includes recreational and social programs designed to create and strengthen relationships between residents and staff, she said.

Nearly every Saturday afternoon a themed gathering is organized for the residents that includes music, food and games. Birthday and holiday cards are sent out to ensure everyone is made to feel special.

“They’re all so close to each other and well taken care of,” said Richardson.

Her favorite part of volunteering with Atterdag Village is talking and listening to the seniors, she said.

“Our residents have incredible stories about what they’ve done and where they’ve been. One lady used to be a pilot back in the 40’s!”

Born in Solvang as a fourth-generation resident of the Los Olivos Dallas-Davis family, and the Steffensen’s who arrived in Solvang from South Dakota in 1931, Richardson attended Solvang Elementary School and graduated from Santa Ynez Valley Union High School. After a short work-related move to Nipomo with her husband of 22 years, Lynn Richardson, they returned to the Valley a few years later.

She remembers working at Pea Soup Andersen’s as a teenager, serving patrons little tastings of coffee and cakes, and at Wilk’s Drive-In, touted as the high school hang out.

Richardson said that one day over a glass of wine, she and her friend from elementary school decided to open a flower shop in Solvang called “Fancy Flowers.” Though a hectic time of year, her favorite floral season was Christmas. Ten years later they sold the business.

In addition to raising two boys in the Valley, she has donated her time to Boy Scouts of America, 4-H, youth football and special needs programs for both adults and children. This led her to volunteer with Santa Ynez Elks Recreation and the Alpha Pi Charitable Organization as a member, then president.

When she is not organizing events, fundraising with the Auxiliary, or encouraging others to spend time helping others, you can find Richardson playing bocce ball with her husband through Solvang Parks and Recreation; spending time with their four children, 10 grandchildren, and two great-grandchildren; or planning their next travel destination — which happens to be Patagonia with a voyage around the Strait of Magellan this coming spring.

“I love my family. I love my life. I have a wonderful husband and community. I am very lucky,” she said.

Volunteer of the Year Seniors

Diana Richardson, shown with her dog Mucho, has been named the Santa Ynez Valley volunteer of the year for seniors.

Diana Richardson works on paperwork at her Solvang home. She has been named the Santa Ynez Valley volunteer of the year for seniors.