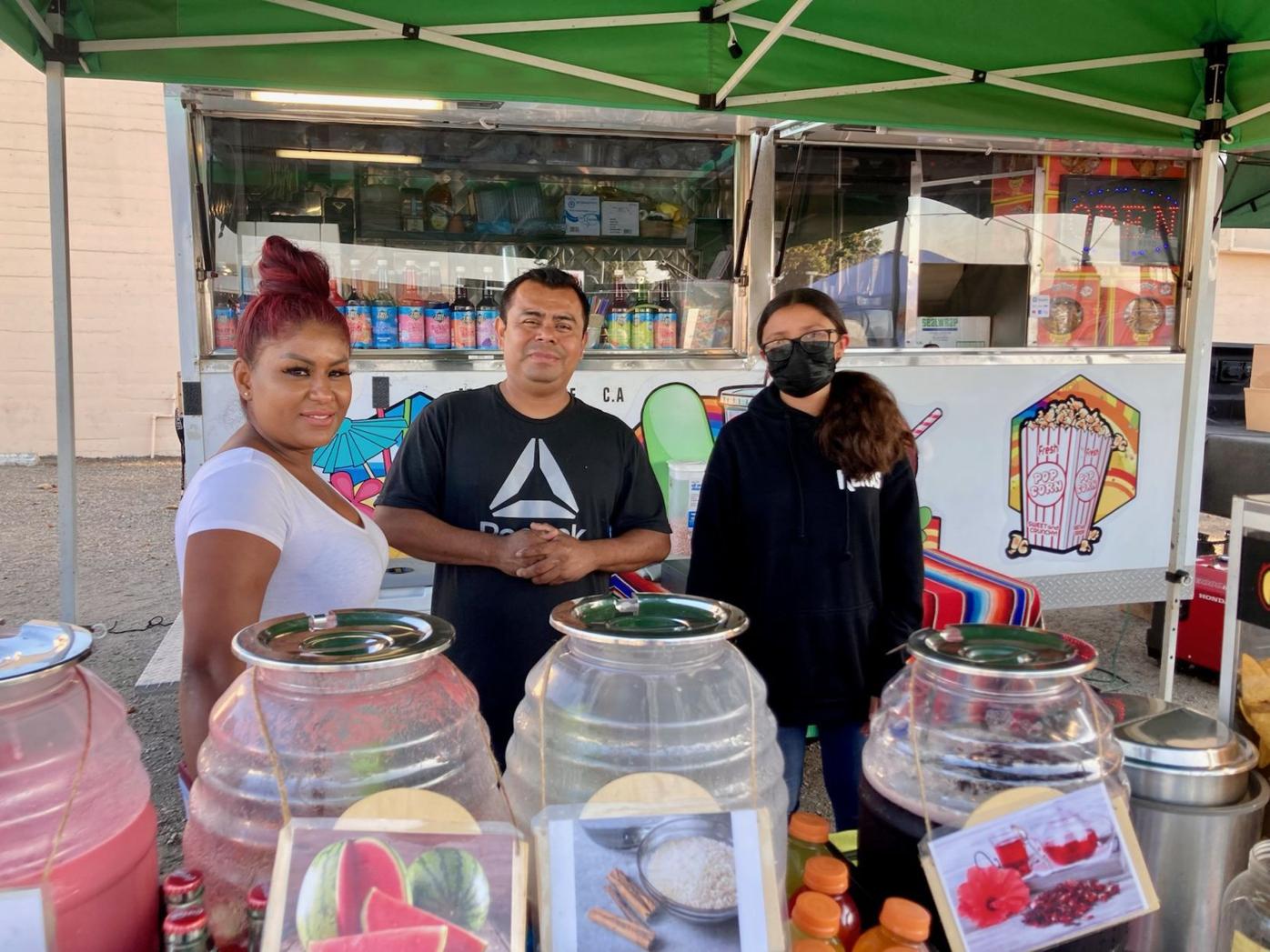 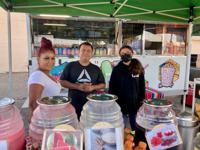 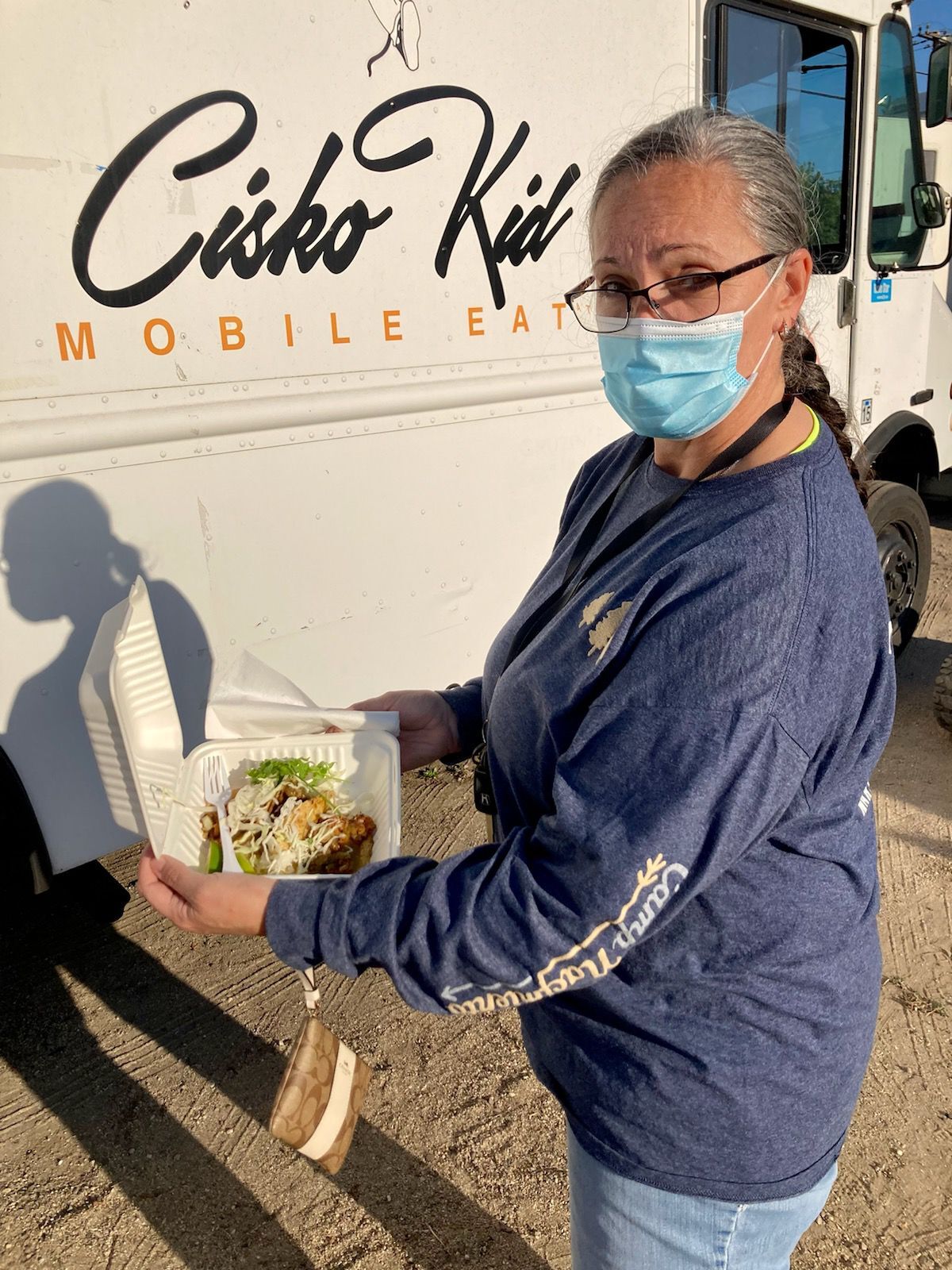 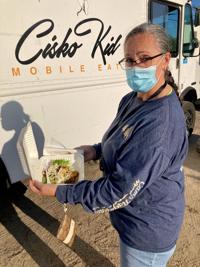 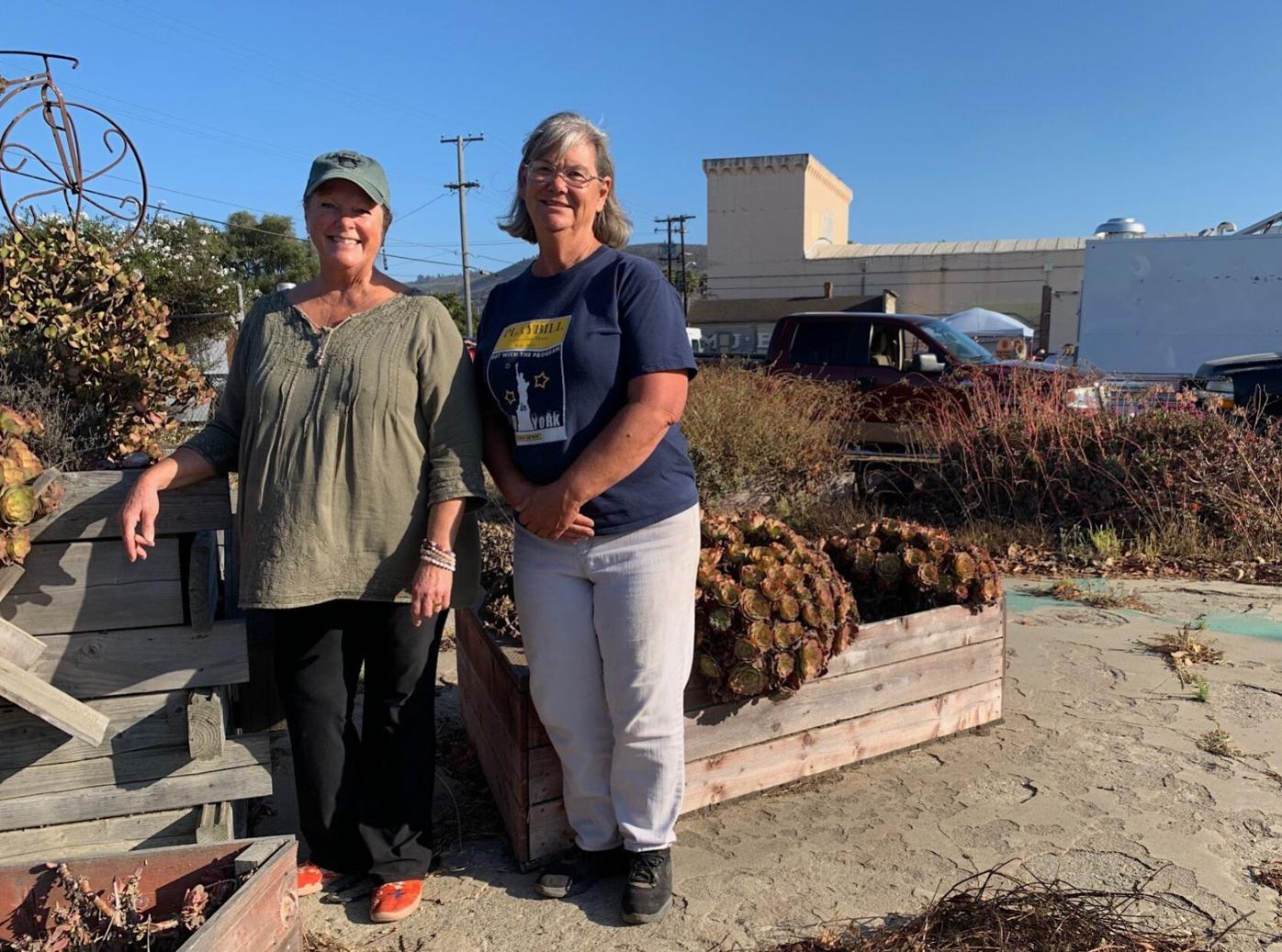 Anne Ramsey, left, secretary and director of theater operations for the Lompoc Theatre Project, and Barbara Satterfield, president, stand in the adjacent lot recently donated to the nonprofit by Lorraine Cox. 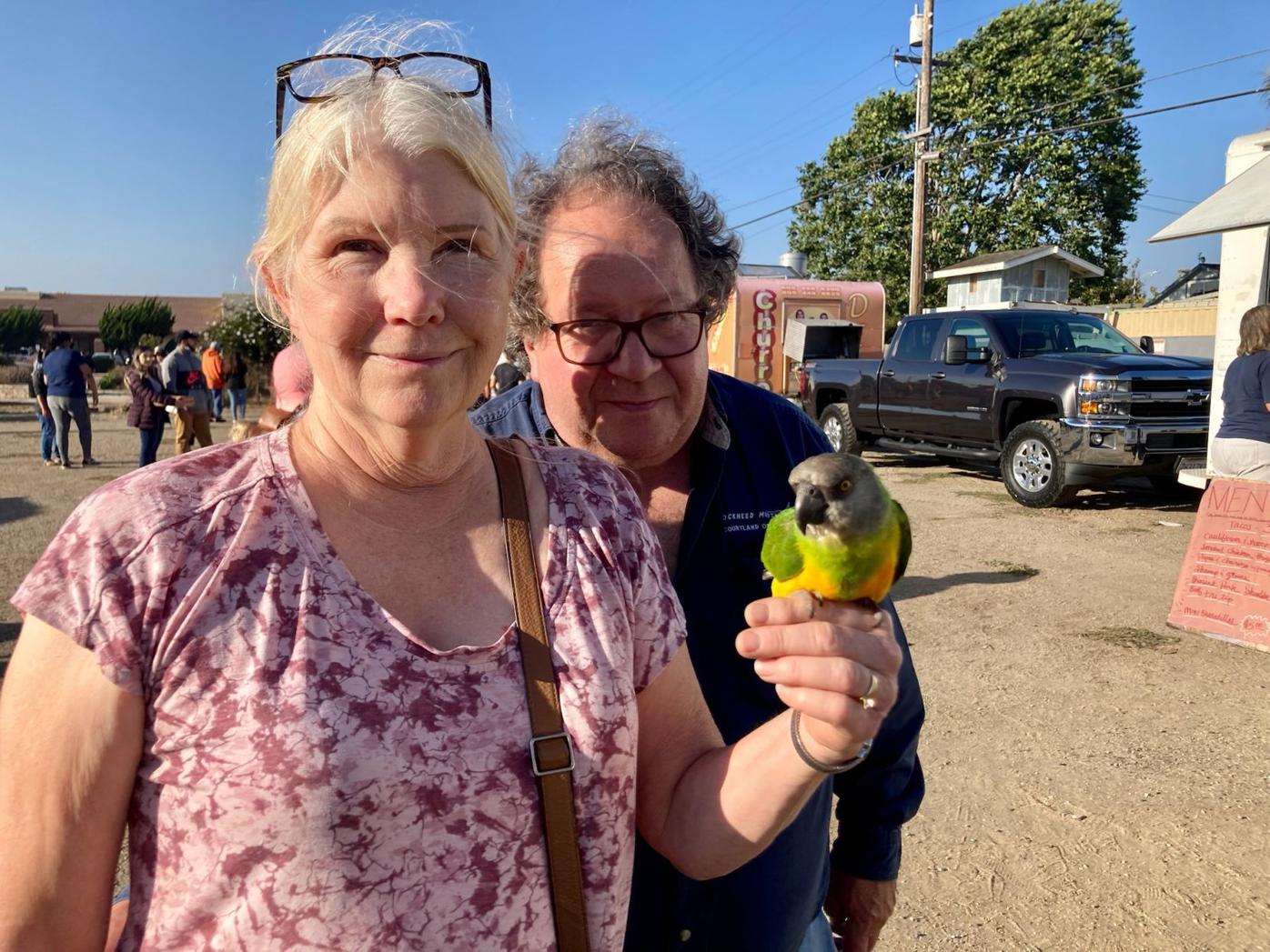 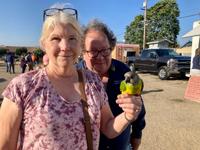 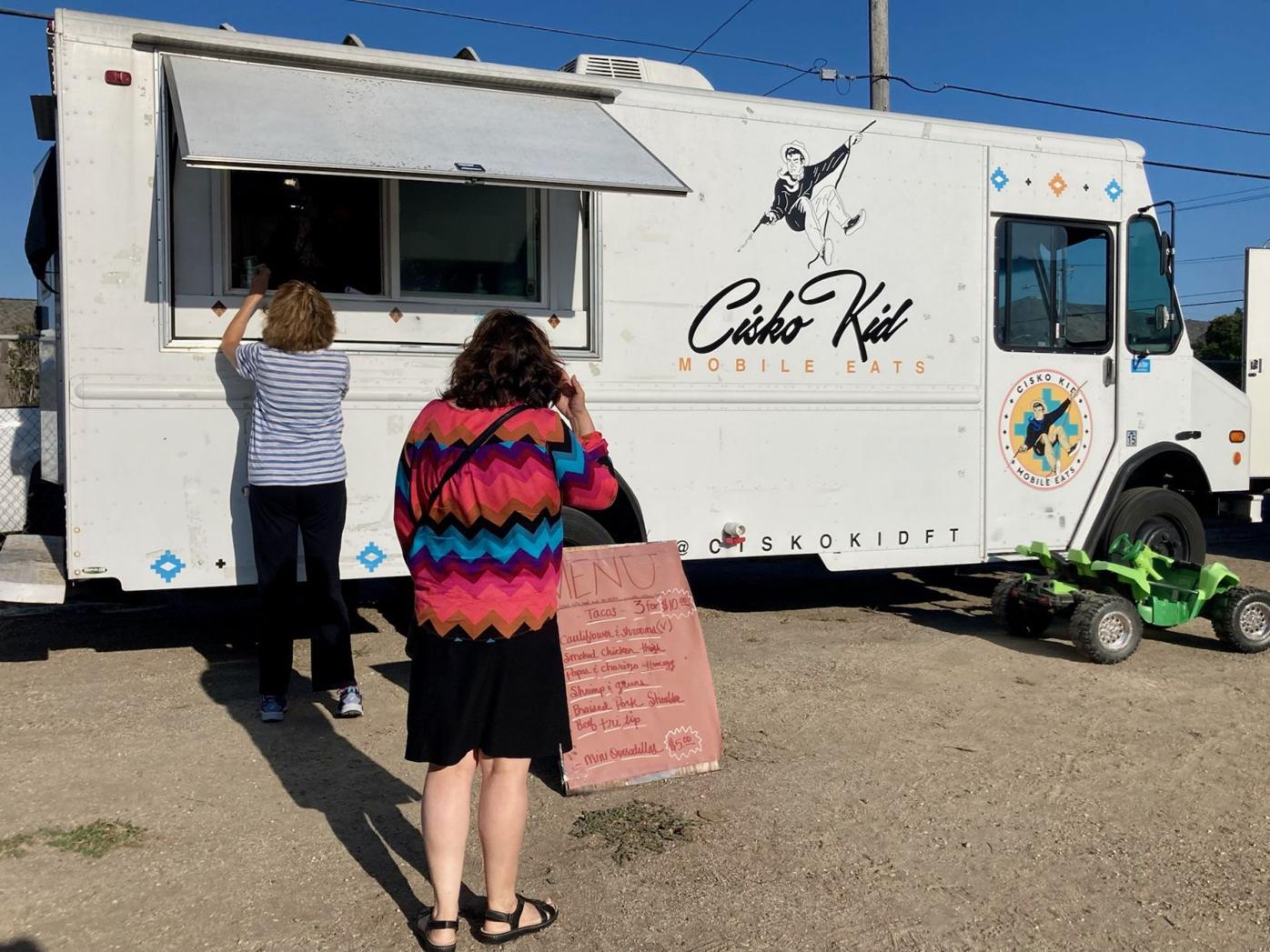 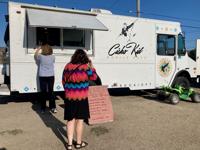 Two patrons order from one of 10 featured food trucks at Lompoc's Food Truck Friday event held each week through Oct. 22 at the Lompoc Theater parking lot. 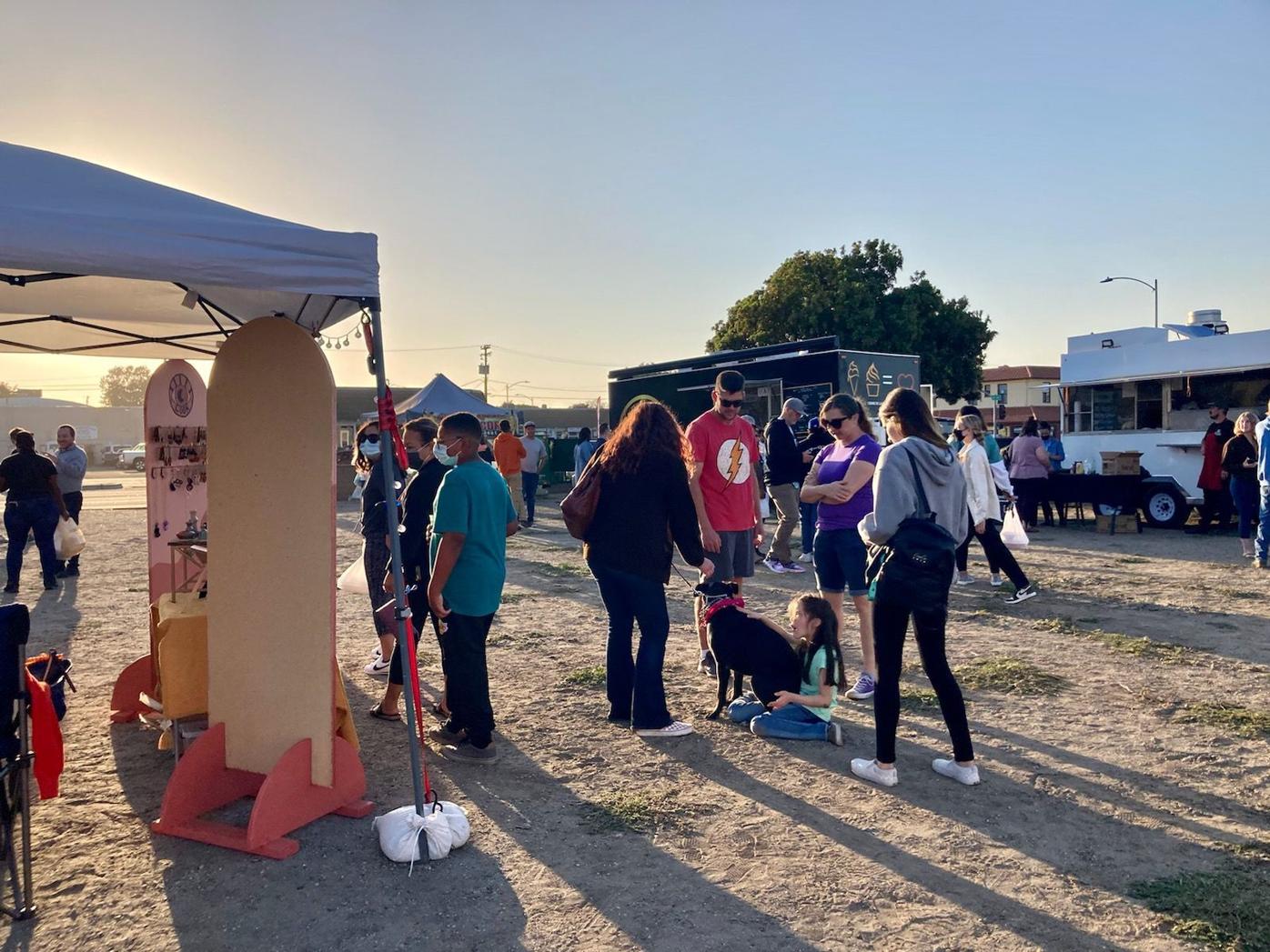 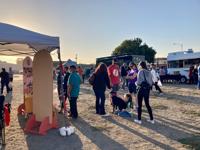 Two patrons order from one of 10 featured food trucks at Lompoc's Food Truck Friday event held each week through Oct. 22 at the Lompoc Theater parking lot.

The Lompoc Theatre Project continues to make headway on its effort to save the historic downtown theater, all while keeping members of the community engaged — and happily fed.

"I go all the time," said local resident Cher Hollingworth. "I like the papas and chorizo taco — it's amazing with a fried egg on it. I also like the Tennessee hot chicken [from Sassafras] and the tri-tip sandwich that comes with garlic sauce."

Rolling into its fourth month at host site Lompoc Theater, the town's weekly Food Truck Friday event — launched last year by Sarah Price, owner/operator of Sassafras and co-owner of Big Truck Foods — has so far helped the historic theater raise $3,400, according to Anne Ramsey, secretary and director of theater operations for the Lompoc Theatre Project.

Funds raised will go toward the $7.5 million project goal to restore and reopen the downtown theater to the community.

Hollingworth and her husband, Bruce, made a colorful appearance on Friday evening with their pet Senegal parrot, Simon, to sample new dishes and support the theater and the featured weekly vendors.

"Alex Reyes is usually here; he does smoked things and mac 'n' cheese," Hollingworth said, with Simon perched on her shoulder. "And The Birria Boyz's line goes around the block."

Martinez said in addition to some savory treats for purchase, his food truck each week offers fresh juices based on what's in season, with the exception of watermelon, which will not be offered during the winter months.

"This one is closer," she said. "We can't go every Friday [to Santa Maria], there's a lot of people at that one."

While the Flowers waited for their orders at separate food trucks, Elaine Flowers explained that afterward they would grab pizza at another food truck for their youngest daughter, who was waiting for dinner at home.

"They take Venmo," she said.

Flowers ordered a potato taco and a shrimp taco from Cisco Kid, and her husband ordered the spicy chicken meal from Sassafras.

"It looks good," Flowers said. "And I don't have to cook or clean up."

Barbara Satterfield, Lompoc Theatre Project president, who attends each week armed with information on the theater project to share with the public, said she hopes the event will continue beyond the expected wrap-up date on Oct. 22.

"This is a pretty good group tonight," she said. "There's always a different variety of people that show each week."

Although she foresees some challenge to hosting Food Truck Friday during the darker winter months, given the lack of lighting at the theater's parking lot, Satterfield envisions a combining of community forces.

"With the donation of the lot, and once it's cleaned up, we were hoping to move the farmers market there and have the Food Truck Fridays here," she said. "It'd be a long day of activities."

The Lompoc Theatre Project recently announced its acquisition of a small .32-acre lot that abuts the theater property — on the northside, along Walnut Avenue. The property was gifted by longtime resident Lorraine Cox, in memory of her late husband, who was a former Superior Court judge and community activist.

The lot increases the theater's property line and will ultimately lend itself to additional space for patron parking once the theater is rebuilt, Satterfield said.

"This theater, for me, is for the kids," she said. "I want the kids to have a place to perform and have a place that they can experience being on the stage."