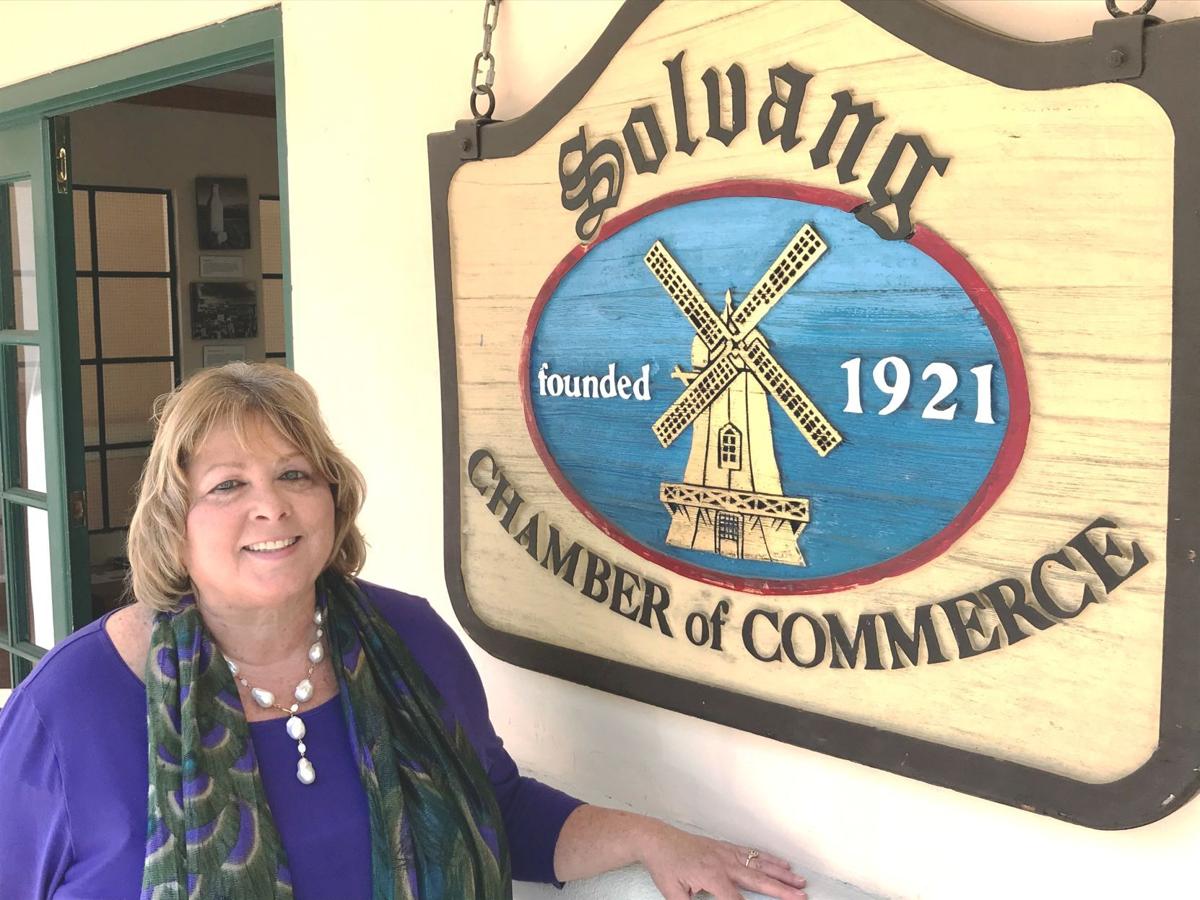 Tracy Beard executive director of the Solvang Chamber of Commerce was one of six to receive the 2020 Congressional Women of the Year Award presented by Rep. Salud Carbajal. 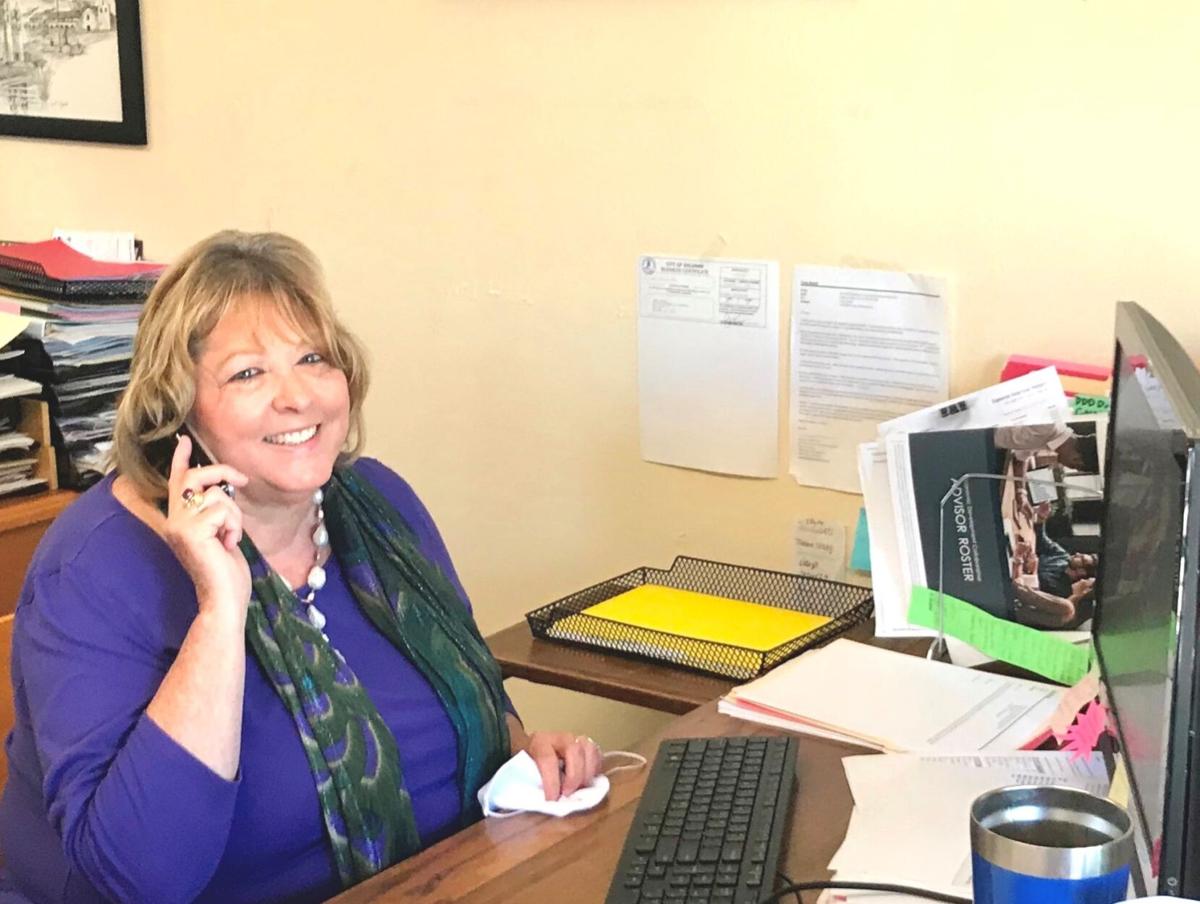 Tracy Beard takes a call from her desk at the Solvang Chamber of Commerce where she has served as executive director since 2015.

Tracy Beard, executive director of the Solvang Chamber of Commerce, was recently named one of six recipients of the Congressional Women of the Year Award presented by Rep. Salud Carbajal.

Each year for the past three years Carbajal has recognized outstanding women across the 24th Congressional District who have left a positive impact on their communities, and this year was no different.

Beard, 58, who has served as executive director for the chamber since 2015, said she received a call from a congratulatory Carbajal at her Solvang home three weeks ago that completely caught her off guard.

"I knew nothing about the award," Beard recalled. "I was very surprised when Salud called my home and told me."

The thought of being recognized for something she chalks up to growing up with great role models like her mother and grandmother — who was a "Rosie the Riveter" having served as a purchasing agent for U.S. Steel in Gary, Indiana in the mid-20th century, she said, is humbling.

The Solvang Trolley & Carriage Company has catered to thousands of Solvang tourists since 1973.

She defers her achievements to the greater community of women who continue to empower her vision to help inform an equal and just world that starts in her own backyard, and further credits personal mentor, Patty Dedominic, a Chamber board member, with encouraging her voice.

"It's kind of a surreal moment that people recognize the work that I think all women are doing — it's not just me. I think, I just happened to get recognized because I have a big voice," Beard said, laughing. "I accept this for 100 other women that should have gotten this award before me."

In addition to supporting the Santa Ynez Valley business community through her role with the Chamber, Beard has served on the Santa Barbara County Commission for Women since 2012, including as its chairwoman in 2015, and on the National Association of Commissions for Women board of directors since 2015, which she currently serves as president. The Commission for Women is an advisory group that promotes the well-being and equal status of women which dates back more than 40 years.

Although the 2020 Presidential General Election is more than four months away, the clock will soon start running on deadlines for city, school district and special district candidates to meet as part of the filing process in Santa Barbara County.

Last year under Beard's guidance the commission won Santa Barbara County its first national award hosting a series of "Women Speak Up" workshops in 2018 during Women's History Month — both in English and Spanish — that drew together women and girls from throughout the county to share their thoughts, concerns and needs with their district commissioners.

The commission continues to tackle tough issues like women veterans and homelessness that stress the importance of countywide social service support, which Beard says is vital.

She said that the award for her doesn't represent a job well done, rather, it's a signal to do more.

Spearheaded by Beard, the Women's Commission nine years ago introduced the United Nations CEDAW, Convention on the Elimination of all Forms of Discrimination Against Women, resolution, which if signed off on by all cities within Santa Barbara County, will become an adopted ordinance observed by the county.

"I was the pushing, driving force for it to [become] an ordinance by election day this year," Beard said, noting that a symbolic gathering of signatures by Aug. 26 would coincide with the 100th anniversary of women's right to vote. "Between Joan Hartmann's office and Mona Miyasato, we've been working on this a long time to make it happen. I'm proud of that."

The CEDAW organization monitors the implementation of the global resolution which ensures women's rights. According to its website, the level of participation by the United States is equal to that of China, India, Saudi Arabia, Afghanistan and Sudan.

"I'm not afraid to tell people what needs to be done for equality in this county— for mental health, for social justice and advocating for women for domestic violence and rape crisis," Beard said. "There is an opportunity right now for this community to move forward ... this is an opportunity for our County to work together as one whole for all causes, and to put more money towards social justice. I think right now equality is what we need for everyone."

Construction on the east side section of town is scheduled to begin early July and continue through the month of October.

Once the center's $2.5 million capital campaign hits its first financial benchmark — $1.5 million — the plan is to break ground on the project. So far they have raised $450,000.

Solvang city leaders expect the COVID-19 roller coaster to continue for as long as a year, so the City Council will likely keep Copenhagen Drive closed to vehicles and purchase street furniture for its businesses that have moved outdoors to survive.

Three standard pallets stacked high with boxes containing masks and bottles of sanitizer, as well as a number of face shields, arrived at Solvang's CHOMP restaurant, which is being used as a distribution center.

Tracy Beard executive director of the Solvang Chamber of Commerce was one of six to receive the 2020 Congressional Women of the Year Award presented by Rep. Salud Carbajal.

Tracy Beard takes a call from her desk at the Solvang Chamber of Commerce where she has served as executive director since 2015.