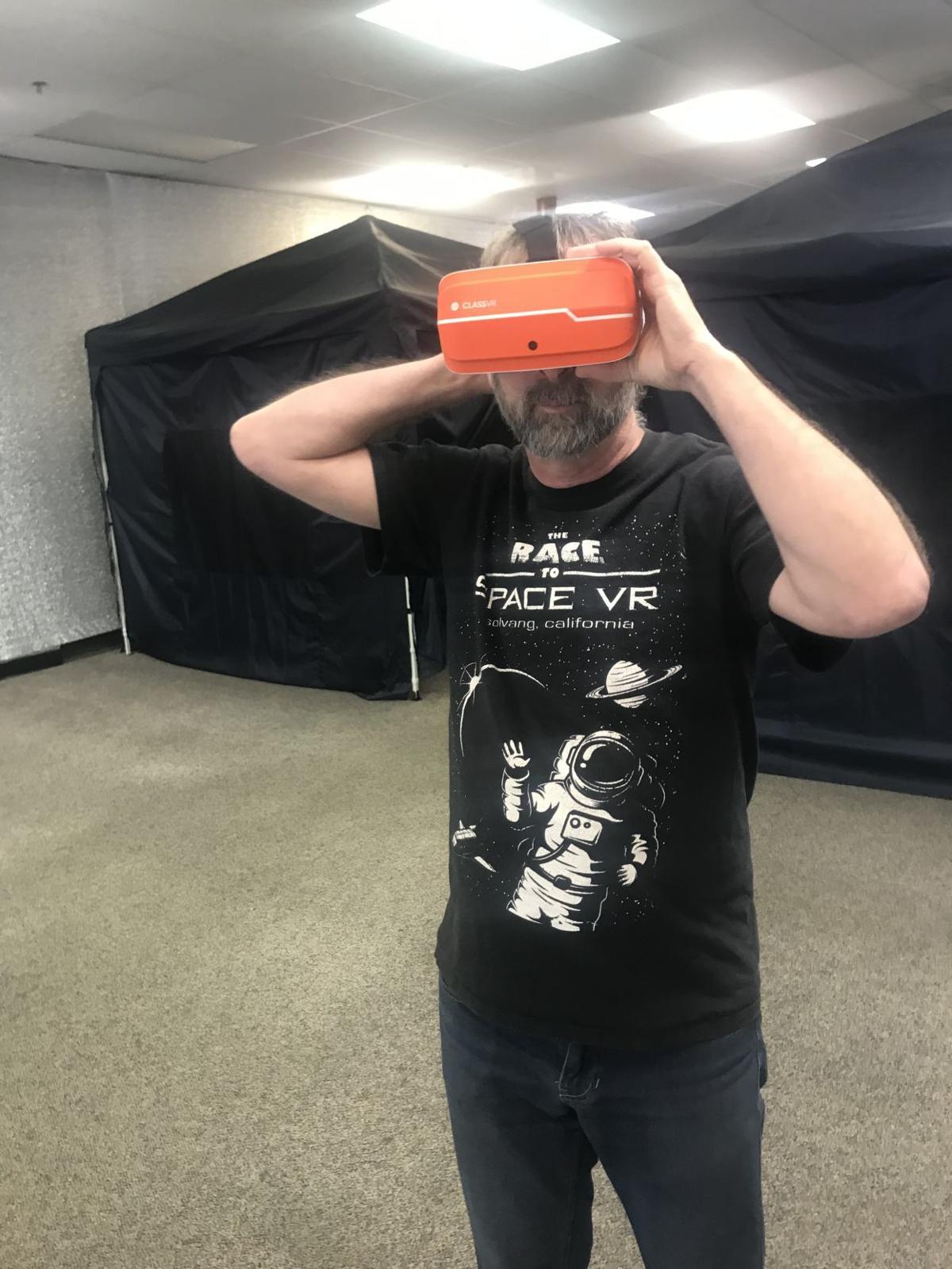 Space VR Solvang owner Jaime Baker fits a virtual reality viewer headset to his head to demonstrate its use. 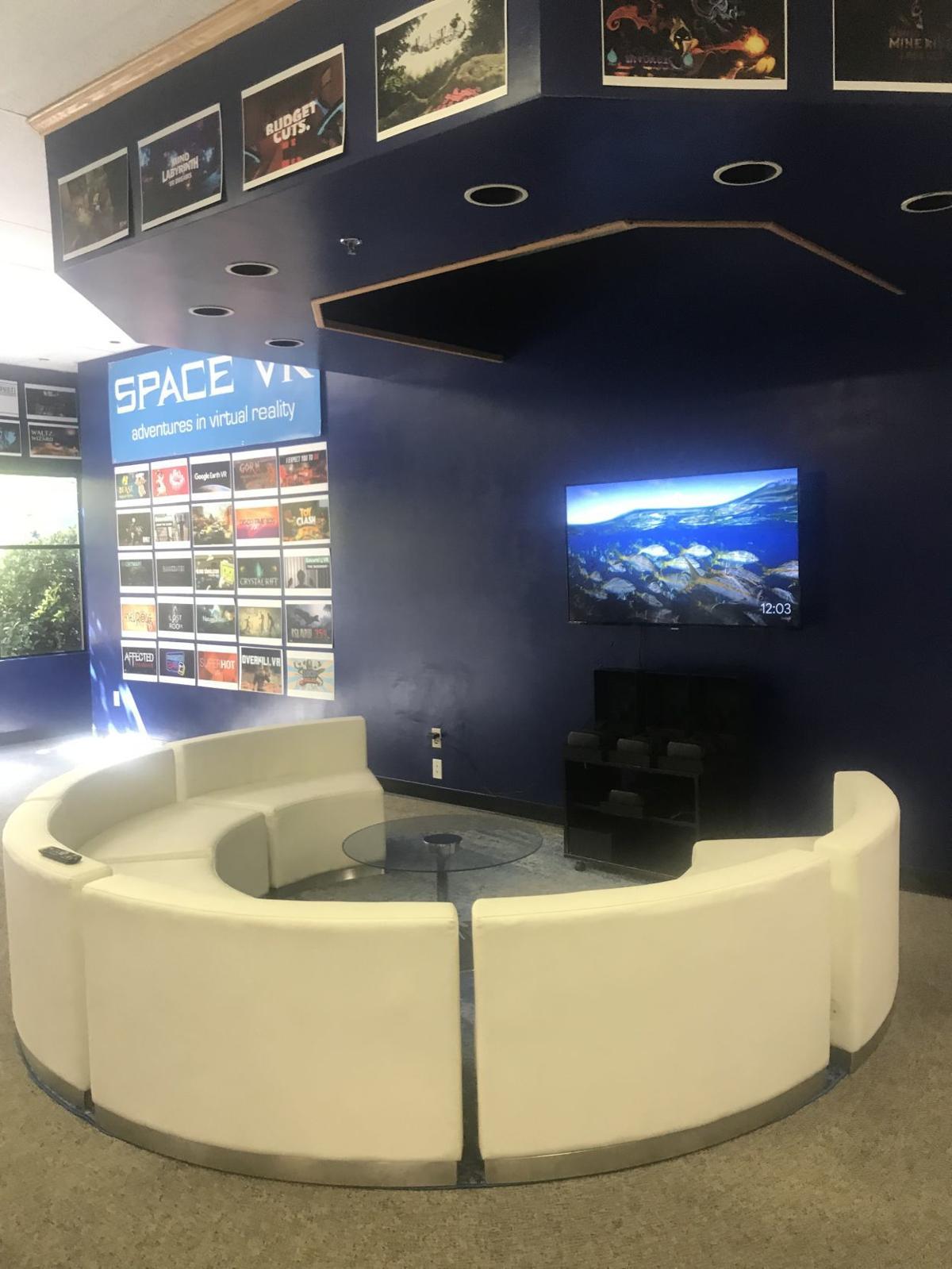 Walking into Space VR, a white circular seating area that breaks up into separate chair pods, faces a central flat screen television that can display what gamers are playing and learning. 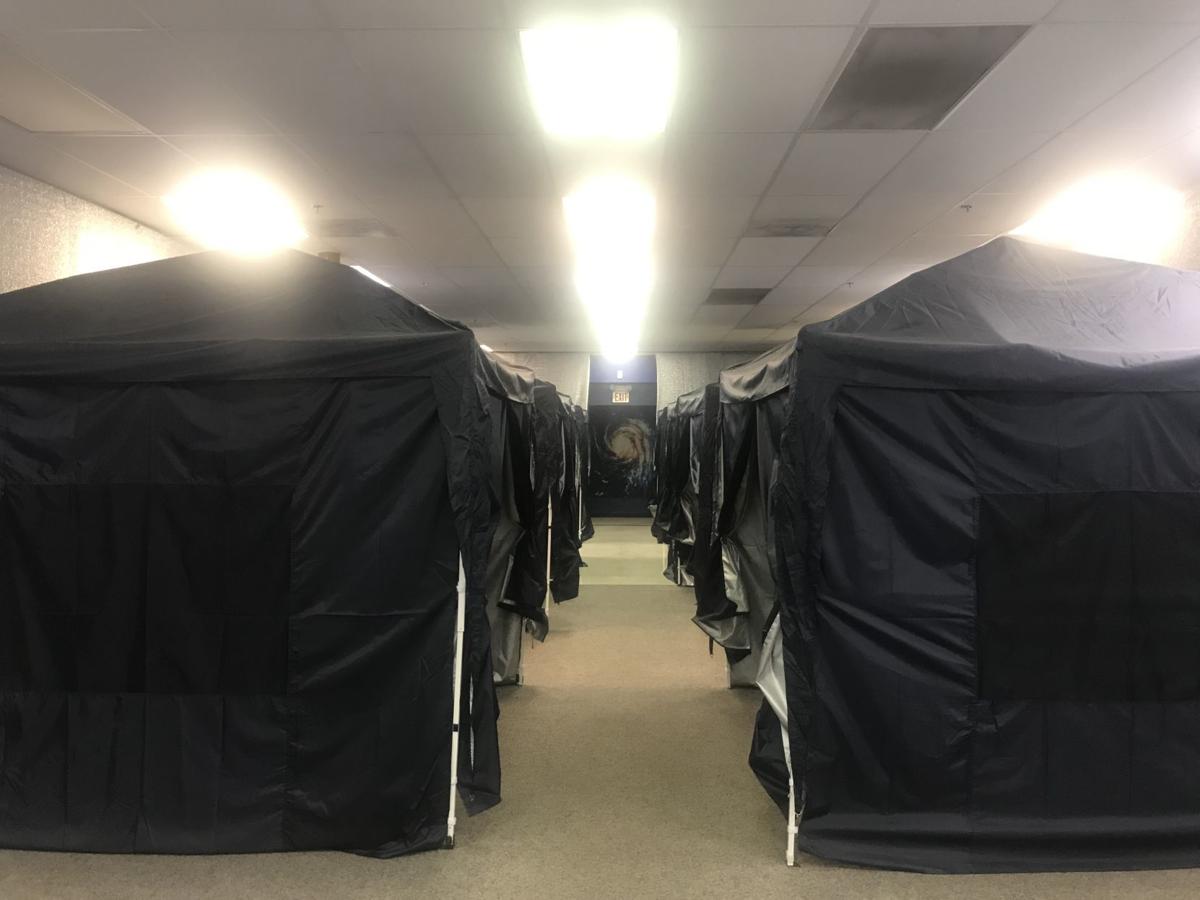 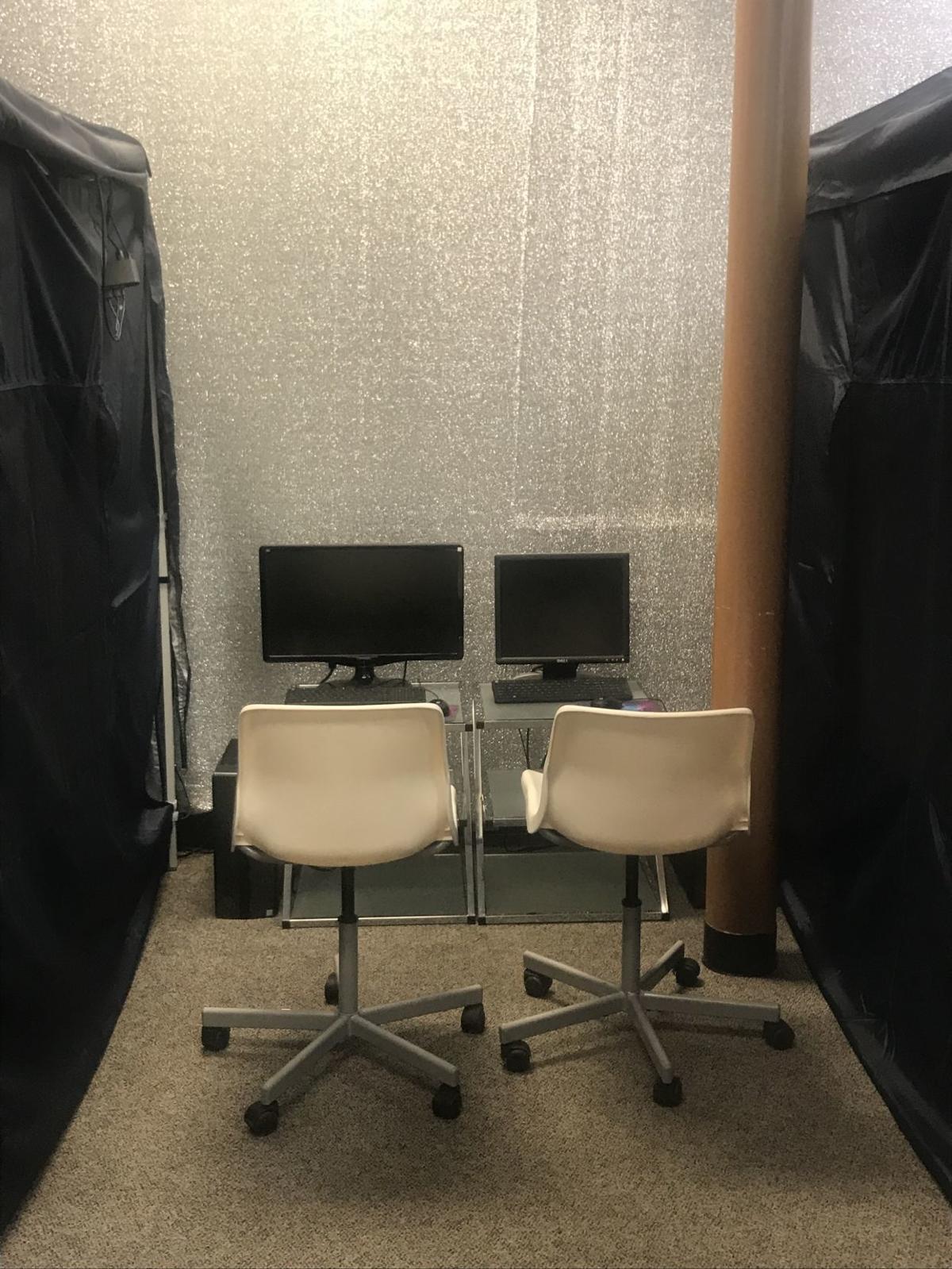 A small technology workspace lies between two black tents which hold individual virtual reality 'gamers' that are hooked up to headsets and their own programs. 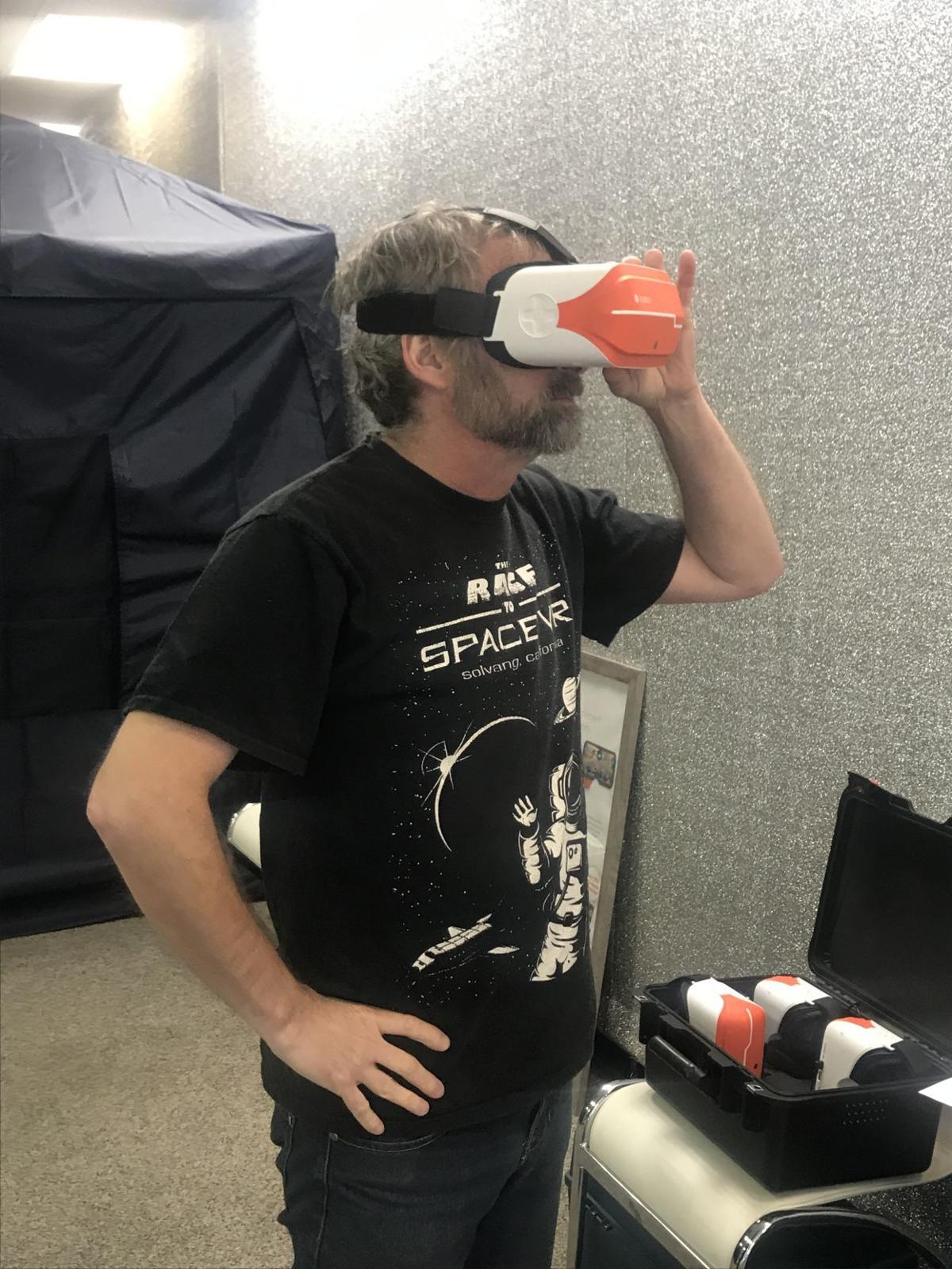 In the spacious, sunlit Space Virtual Reality (VR) headquarters located in downtown Solvang, a young man is seated on a white, circular couch wearing a rectangular piece of technology over his eyes. He moves his hands purposefully in the air, sending specific commands to the small controllers in his grasp.

Not needing to look at the flat screen television that hangs on the wall at the center of the seating area, he continues to fixate in a direction no one else can see, gesturing at things that are only for his eyes.

Space VR's owner Jaime Baker then sends the teenager's 3D pictorial onto the flat screen in an action called "casting," with Dillon's permission. A great spire, bright fire features and gusts of wind produced by Dillon, come to life with animation and can be seen and appreciated as art – albeit on a 3D canvas.

For two hours each week Dillon and his grandmother, Vickie Miller, visit the VR arcade as part of the art program through his school.

"I think it's pretty interesting and a great way for him to learn," Miller said. "He just zooms right in – and he's teaching me."

Since VR was introduced to the mainstream in 2017, according to Baker, much like the 2-dimensional electronic gadgets of the past, today's youth are having little trouble integrating the 360-degree graphics technology into their lives.

Baker gives thanks to his son Levi, for the existence of Space VR itself.

"This is the brainchild of a 12-year-old, my son, who is also my IT director," Baker said proudly.

Baker, a 20-year playwright which includes two years training and two years acting with PCPA, says that his experience in the arts and his son's love of technology are the key components for a business that continues to thrive 1½ years later.

"We saw a very rudimentary version in London, and thought 'let's just kind of explode this idea,'" he recalled.

Comparing Space VR tech to home virtual reality systems, Baker says the difference is that their technology and their library of over 600 games and experiences, puts players inside an environment – surrounded on all sides – by interactive scenes such as the bottom of the ocean, a primeval forest with dinosaurs, the South Pole assisting research scientists, on Mars or, of course, battling zombies.

Though his focus is centered on expanding the educational side of Space VR, which he hopes will one day include a 250-seat theater and global partnerships with artists, science and tech companies, Baker concedes to the universally revered zombie-battling like most other VR arcades.

"City Council members have come down to kill zombies," Baker said, smiling. "But they also think our idea is great, and that [the community] needs more of it."

Where: Space VR arcade is located across from the Vintage Motorcycle Museum in Solvang Village Square, at 320 S. Alisal Road, Solvang

When: Though Space VR is open morning through late evening Tuesday through Sunday and Mondays by request, reservations are recommended.

Cost: $20 for 30 min; $35 for 1 hour. Local memberships and specials are offered at discounted prices. The venue is also available for birthdays parties and other celebrations. Gift certificates for sale.

More easily identified by their illustrious charm and curated looks, Hollywood stars of yesteryear can now be seen in a different light and ad…

'The Little Mermaid' -- a spectacular adventure under the sea -- debuts Nov. 7

When Houth Hak and husband Sen Lay opened the Golden Donut in Orcutt at 5 a.m. Friday after four days off for the New Year’s holiday, a crowd …

It took decades to teach Americans to recycle their trash, to divide paper from plastic, greenwaste from rocks, metal from glass.

Where and how to recycle household waste in Santa Maria

While it’s tougher for consumers to reclaim their cash deposits on bottles and cans after the closures of most collection sites, those items m…

Space VR Solvang owner Jaime Baker fits a virtual reality viewer headset to his head to demonstrate its use.

Walking into Space VR, a white circular seating area that breaks up into separate chair pods, faces a central flat screen television that can display what gamers are playing and learning. 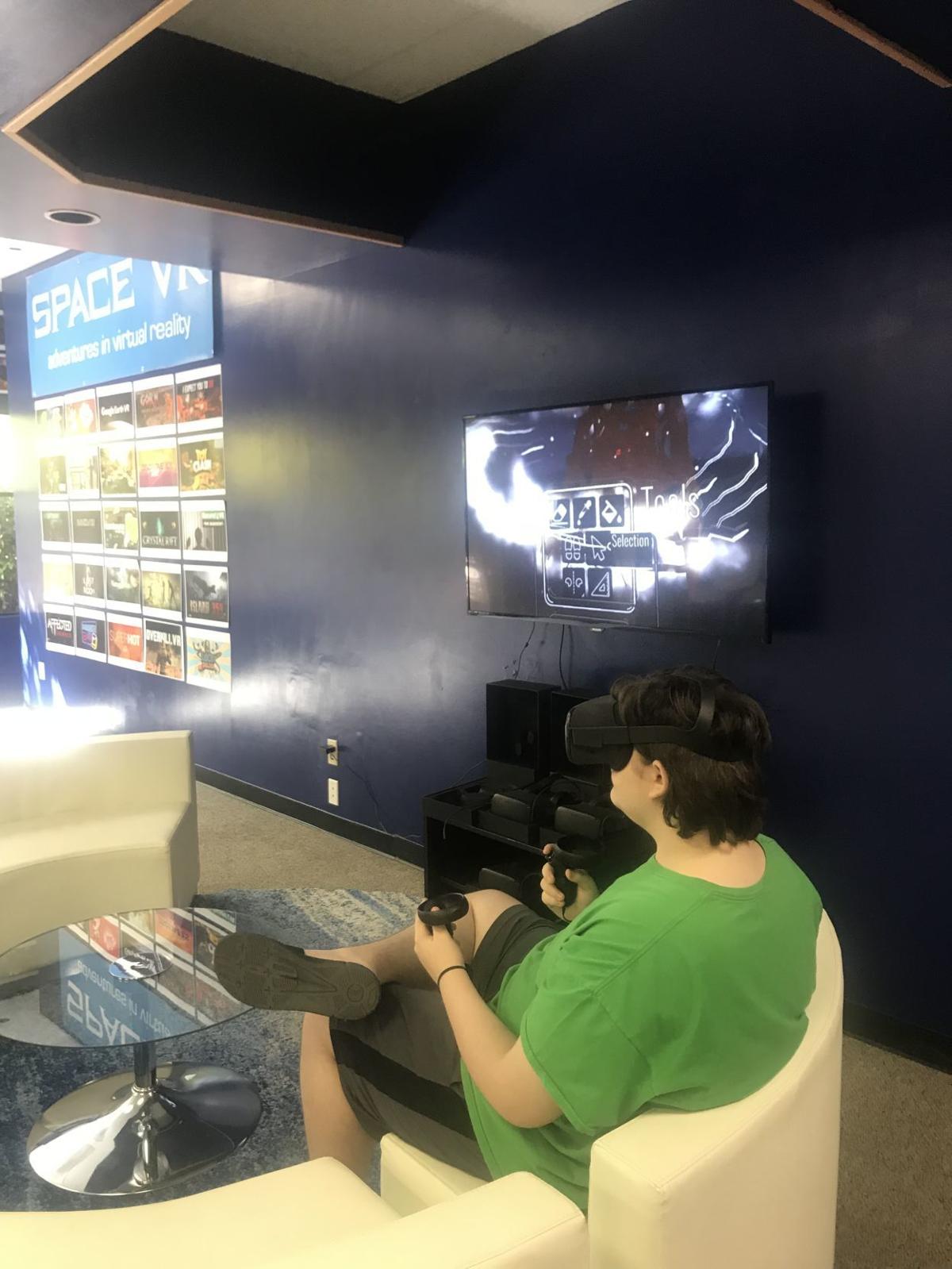 15-year-old Dillon, who frequents Space VR in Solvang, sits comfortably in a chair pod wearing his gamer headset and uses his hand controllers to build a virtual world as part of his school's arts program, for which he receives credit. 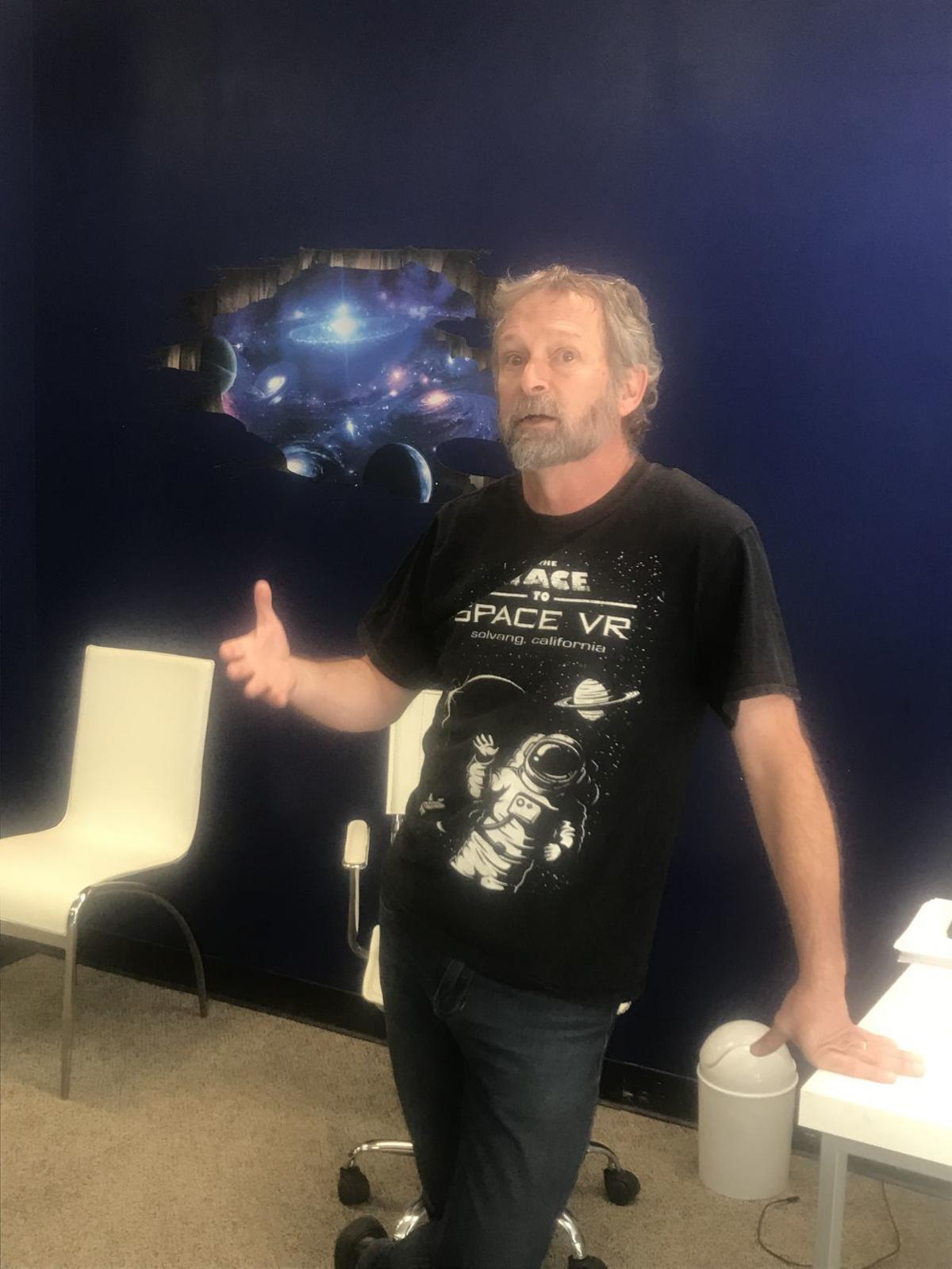 Jaime Baker explains his plans to expand the Space VR program into a large community venue and global curriculum.

A small technology workspace lies between two black tents which hold individual virtual reality 'gamers' that are hooked up to headsets and their own programs.