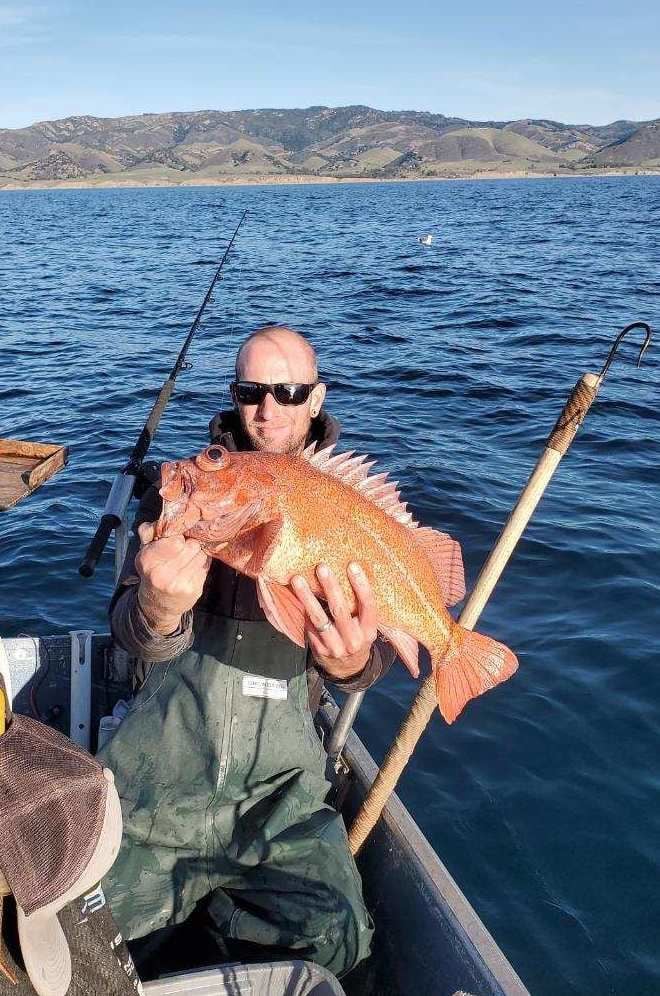 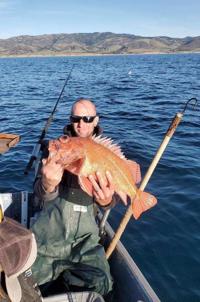 Travis Meyer aboard the New HA holds shows off his catch of the day, a red snapper. 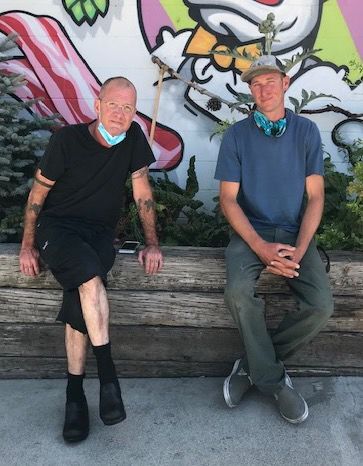 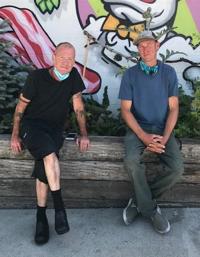 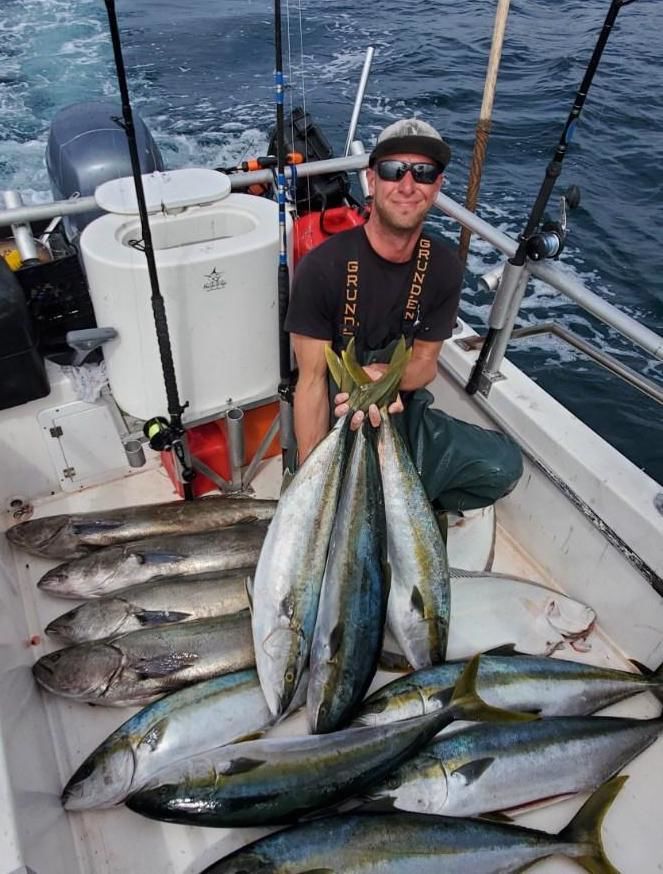 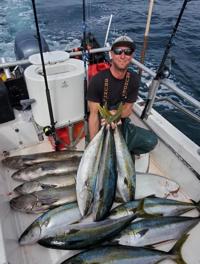 Travis Meyer poses with his catches of the day aboard the New HA. 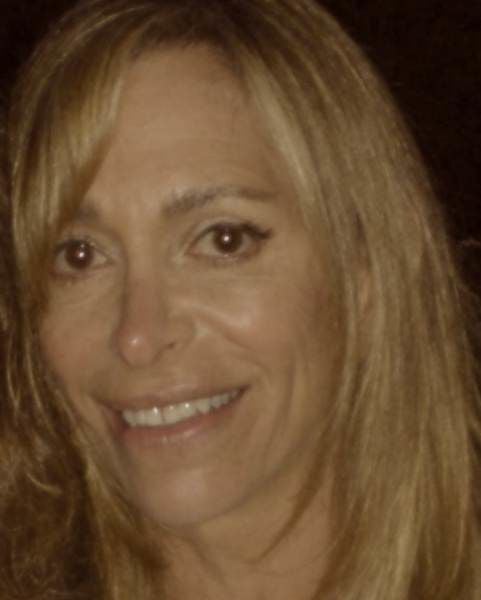 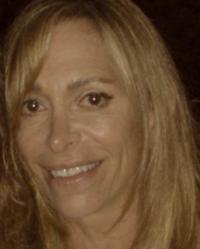 Travis Meyer aboard the New HA holds shows off his catch of the day, a red snapper.

Travis Meyer poses with his catches of the day aboard the New HA.

“I launched my first commercial fishing boat in 2014,” said Travis Meyer, pointing to an aluminum skiff that had clearly seen better days. “I named the boat ‘HAHA’ because I was just a little guy up against the big guys working the Santa Barbara coast. But, unlike the others, I was launching out of Gaviota. My fuel cost me next to nothing. I was fishing hook and line and bringing in the same catches as the big boats. And I was close enough to home to sleep in my own bed at night.”

Travis worked various odd jobs through his high school years in Buellton. While he had always enjoyed sport fishing, it was a job on a crabbing boat that gave him a taste for commercial fishing.

It wasn’t always a good taste. He saw a lot of waste that included bins of halibut, snapper and rockfish used as bait because fishing crews from multiday boats had allowed the fish to spoil.

Recognizing a demand for locally caught fresh fish, Travis went commercial and vowed to fish responsibly and treat marine life with respect. His concern was how to operate HAHA Fishing so that he could afford to run his own business.

Rather than the expense of docking in a harbor, Travis tows his current boat, the “New HA,” from his Santa Ynez base to a quiet little spot on Gaviota’s beach near the once-popular pier.

The powers that be permit Travis to tow his boat through Gaviota State Park to the beach. He rolls the boat from his truck down to the water’s edge and hauls his “stuff” into the boat while keeping it from floating away. He then plows through the waves and turns the boat around before heading out to sea. No easy feat, but Travis knows the area well, and launching from Gaviota saves him fuel, fees and time.

“The Gaviota coast has a very rich and diverse ecosystem. It’s where I wanted to be for lots of reasons,” Travis explained. “But it also has some challenging weather patterns, winds that can change in minutes and blow you straight out to sea. The worst is what we call the ‘Fingers of Death,’ when the clouds hold tight in the canyons and then crawl down the mountains toward the water like creepy fingers. Once the currents are blowing uphill and the waves are steep, you want to head in before it rips. In a 15-foot boat, you could end up in a world of hurt.

“I’ve taken waves over the bow and been pummeled by extreme winds. I’ve even flipped the boat in bad conditions. And I’ve learned when to stay home,” Travis added.

He also learned early to bypass the middle men and sell directly to his clients. Most important to Travis was to make fresh, local, sustainable seafood easily accessible. With a little help from some friends, he connected with a few chefs in the Santa Ynez Valley. Priceless was the fact that Travis could deliver local fish within two days of the catch.

Word traveled quickly in the Valley, and it wasn’t long before other chefs, as well as friends of friends, were hooked on HAHA Fishing. His current problem is keeping everyone in fresh fish.

And because Travis can’t always satisfy all of his customers, he has formed partnerships with a few like-minded fisherpeople interested in selling their catches to those who appreciate “really fresh fish.”

Travis’ latest project is learning Ikejime, a rapid and humane method of killing fish that benefits the quality of the meat. The practice originated in Japan and is becoming popular among fisherpeople everywhere.

A few days after interviewing Travis for this story, he texted me about the day’s bounty, including vermilion rockfish, sea bass and black cod. I signed up for a 3-pound black cod and picked it up — gutted, gilled and scaled – from a cooler at Travis’ place a few hours later.

Travis is permitted to clean his fish on the boat, but not process (i.e. fillet) the fish due to sanitary reasons. With restaurant business slow during the pandemic, Travis approached Jeff Olsson of Industrial Eats who agreed to let Travis use his kitchen for processing. Travis now notifies his customers of the day’s catches, takes their orders, works in Jeff’s kitchen after hours, and then delivers the freshly filleted fish the next day.

I joined Travis at Industrial Eats one recent afternoon on his way home from a day of fishing. He had some beautiful rockfish for Jeff which, as described, would be roasted whole in the oven with some lemon and basil, spine removed, head and tail intact and served with an heirloom tomato salad.

“We are completely producer-driven,” said Jeff, known for serving only the finest and freshest of foods in the Santa Ynez Valley. “We work with about six local farms and ranches. Travis fits perfectly. I’ve always enjoyed cooking with what I have rather than coming up with an idea for a dish and then seeking out the product. The seafood we serve is whatever Travis catches. It doesn’t get any fresher!”

Place fish on cutting board, dorsal fin up. Starting at the head, run your knife just above the spine down towards the tail. Back at the head, push knife through and up and over the spine until it frees the fillet from the spine. Flip the fish over and repeat. Using a pair of kitchen shears, snip the spine at head and tail and remove. With the fish connected by head and tail (but no spine), season inside of fish with salt and pepper. Stuff with lemon slices and basil. Rub both exterior sides of the fish with olive oil and season with salt and pepper.

You can “chuck it on the grill” for about 4 minutes per side or bake it in a 400-degree oven for about 15 minutes.

Gently toss the salad ingredients with olive oil, lemon and salt and pepper. Put about half the salad on a platter. Lay the fish on top and then top the fish with the other half of the salad and enjoy.