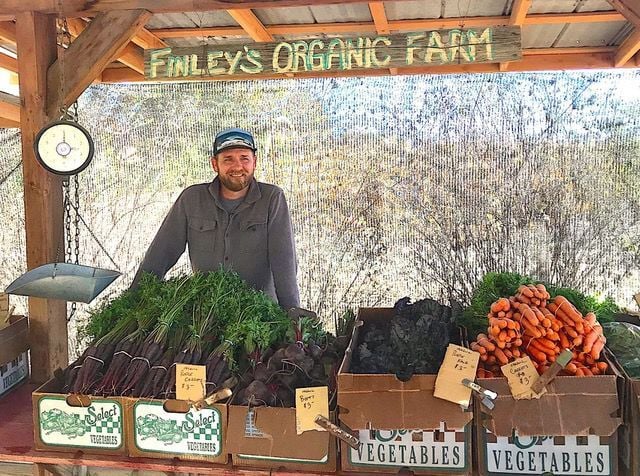 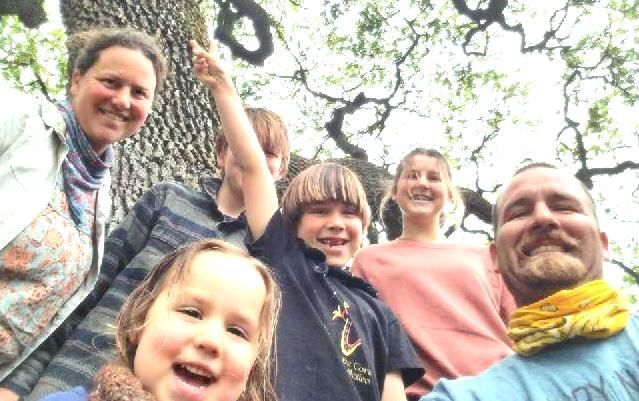 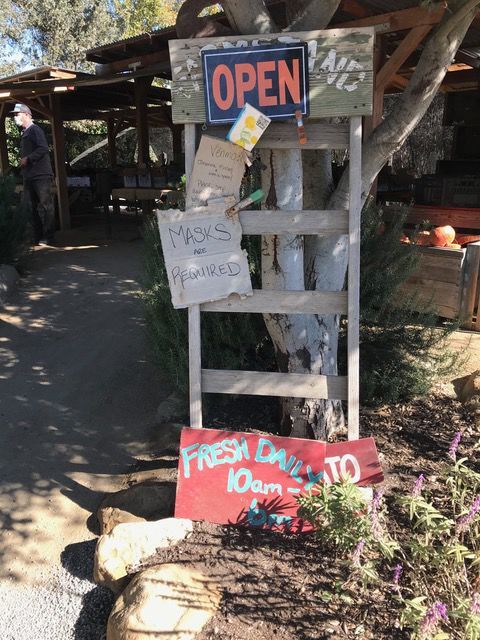 The entrance of the Finley’s Honor Stand displays hours of operation: 10 a.m. to 6 p.m. daily. 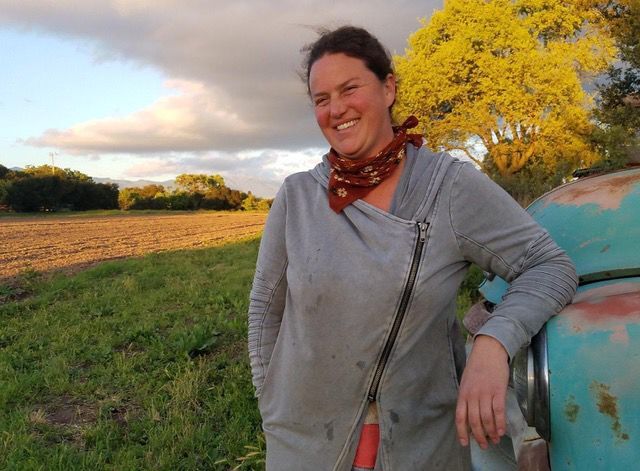 Johanna Finley takes a moment from her daily work on the family farm.

Living in Los Angeles, my Sundays always started at the Hollywood Farmers Market with a stop at Finley Farms’ booth for fresh vegetables.

When my husband and I moved to Solvang a few years ago, a friend welcomed us to our new home with a bag full of spinach, carrots and other goodies and pointed us in the direction of Finley Farms’ Honor Stand just down the road in Santa Ynez. What a perfect housewarming gift. And to know that I didn’t have to wait until Sundays to pick up produce at Finley’s.

The vegetables and fruits somehow taste even fresher when buying from Johanna and Chris Finley on their own turf.

It never occurred to me to do a column on Finley Farms. I assumed that everyone around here knew their story. Johanna corrected me. What isn’t necessarily known is that the Finleys grow everything that they sell.

Their farming career began while Johanna and Chris were attending UCSB and took jobs selling produce at farmers markets for a couple of farms.

Those jobs continued to pay the bills after graduation, allowing the Finleys to lease some land in El Capitan Canyon where they grew the ingredients for their “from seed to salsa” business. Their homegrown salsa attracted a following at the Santa Barbara Farmers Market for the year that the salsa venture lasted.

“We wanted to expand,” Johanna said. “We drove up to the Santa Ynez Valley one day to check out rentals. We found a guest house on an acre of unused pasture and moved to Los Olivos a week later. We didn’t have a goal in mind. It was just like, 'Let’s do this.' We knew something about farming.”

“We were still working for others when we started planting our little farm,” Chris added. “When we finally had enough product, we knocked on doors of restaurants and sold what we had to whomever would buy our crops. And because I knew management at the Hollywood Farmers’ Market, we were given a space to sell our stuff.”

The Hollywood Market welcomed young, first-generation farmers. The same can’t be said about those established farms that had been employing the Finleys. They saw their presence at the market as a conflict of interest. And the Finleys suddenly found themselves unemployed.

That was the trigger needed to take the next step. The Finleys knew they wanted to farm. And, as Johanna put it, they had gumption and were determined to make it work.

Within a year, they leased 4 more acres in Los Olivos and another 6 in Santa Ynez. With more crops to sell, they secured spaces at farmers markets in Los Angeles and Santa Barbara counties, market space being as precious as a green thumb.

“Meanwhile, we had our first child and then a second one and then goats,” Johanna said. “I was buying hay from Gainey Ranch and asked the manager if they had land to lease. We gave up the parcels we had previously been farming and leased 20 acres from Gainey, which grew to 60 before the ranch was finally sold.”

And that’s when they moved to the 10 acres that is now their family-owned-and-operated Finley Farms. Besides their organically-farmed property, the Finleys and their field crew work another 60 acres leased in Los Olivos. That’s 70 acres in all.

“As first-generation farmers, we’ve had to teach ourselves everything,” Chris explained. “We farm with nature and understand its cycles. I study a lot, constantly looking for ways to be more efficient. I need to know what’s going to be best for the soil, for the environment, for long-term farming. It’s difficult balancing our planting and harvesting schedules with all we need to do on a daily basis.”

Growing up, I was exposed to great food with fresh ingredients, through the influence of my family. My maternal great grandmother was a culinary goddess and passed down many beautiful recipes to our family...

The Finleys opened the Honor Stand in 2008, as an outlet to sell produce left over from sales at the farmers markets. They would hose off the produce, give it a fresh cut and put it on the table. People came. And most respected the honor system and paid for the produce. The farmstand eventually grew so popular that the Finleys started picking fresh for it every morning.

“We’ve always been driven,” Johanna said. “To know that a customer wants broccolini and I didn’t have time to pick it that morning, I feel badly. If you don’t keep up with the demand, you fear losing customers.”

Pre-pandemic, the Finleys could rely on the farmers markets for most of their sales. The Honor Stand has now become their all-important hub. Fortunately, it’s drawing a steady stream of customers hungry for the field-to-farmstand vegetables, fruits and flowers.

“COVID has pushed us to the edge, especially with four kids at home right now, two of whom are doing Zoom classes and another homeschooled,” Johanna continued. “Parenting and farming together is a lot of work. We sometimes think about downsizing and simply living off our land. Don’t get me wrong; we love what we do.”

I love what they do, too. Visiting Finley’s Honor Stand today, Chris was unloading produce from his truck while I filled a bag for my Thanksgiving menu — carrots, parsnips, beets, squash, fennel, kale and more. I like looking out at the field in front of me, knowing that’s where my food is grown. I like knowing that it’s farmed thoughtfully. I like supporting local business. What’s not to love about Finley Farms?

Jamie Edlin: He works hard for his 'honey'

Don and his wife Ann run San Marcos Farms Honey Company, a small family-owned business specializing in artisanal bee products. Whereas some apicurists pour their honey into 55-gallon drums and sell them to packers as is, Don is a producer-packer who currently sells his varietal honeys along with...

Recipe for roasted carrots and parsnips

Cook farro according to package directions. Drain and transfer to a bowl. Drizzle with about 2 teaspoons of olive oil to coat the grains, cover to keep warm and set aside.

Peel carrots and parnsips. Cut in half lengthwise. Place on cookie sheet or roasting pan. Mash up cumin seeds, kosher salt, ground black pepper, chopped garlic and thyme leaves. Add olive oil and a swig of vinegar. Pour over vegetables to coat them. Add the orange and lemon halves to the pan, cut side down. Roast on lowest rack in the oven until tender and slightly charred, about 20 to 25 minutes. Remove from oven.

Using tongs, squeeze the roasted orange and lemon halves into a small bowl. Add an equal amount of olive oil to the juices. Mix and pour the dressing over the vegetables.

Spoon the farro on to a large platter. Layer the carrots and parsnips on top of the bed of farro. Sprinkle with the toasted seeds and sea salt (to taste).

The Fess Parker family recently announced that its estate vineyard, Rodney’s, has been recognized by third-party certifier Sustainability in P…

The entrance of the Finley’s Honor Stand displays hours of operation: 10 a.m. to 6 p.m. daily.

Johanna Finley takes a moment from her daily work on the family farm.