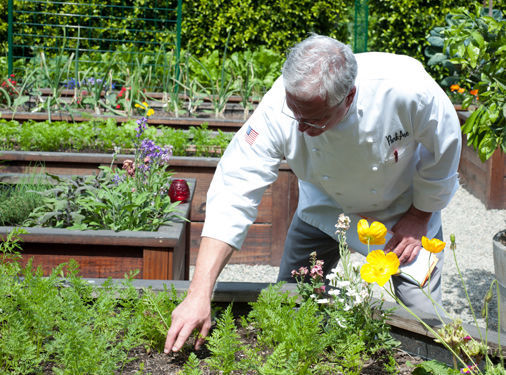 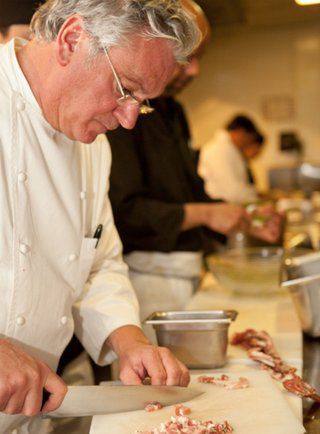 Chef-Grower David Slay at work in the Kitchen. 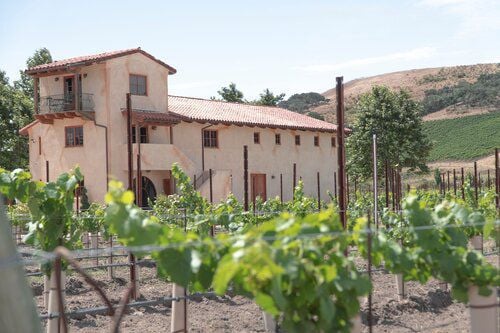 David Slay’s Tuscan-inspired farmhouse, vineyard and gardens in the Santa Rita Hills, a romantic venue for weddings, fundraisers, and other gatherings. 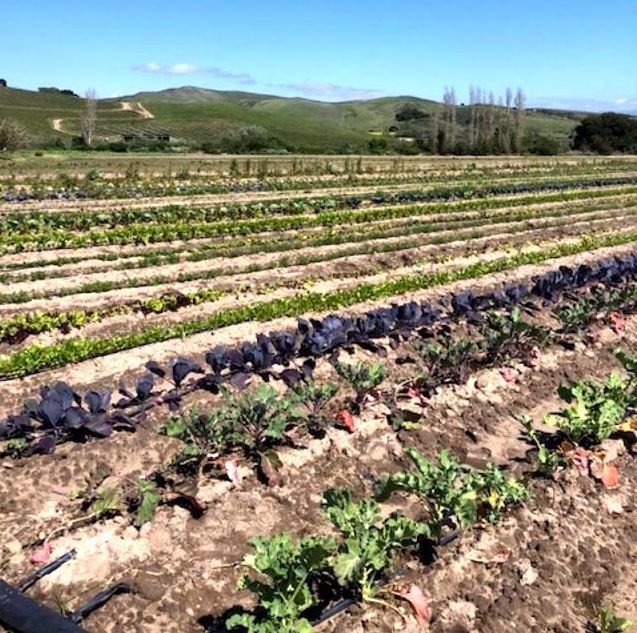 David Slay grows produce in the Santa Rita Hills for his California-based restaurants. 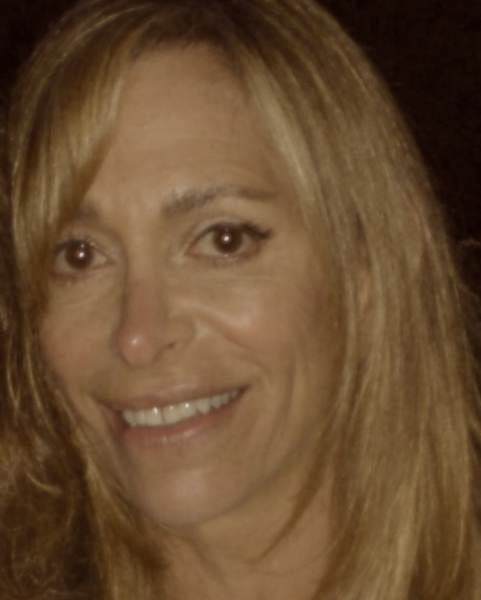 Third-generation restaurateur, chef and grower David Slay’s roots were planted in St. Louis before he farmed his way to the Santa Rita Hills via Los Angeles, Orange County, and Manhattan Beach.

I met David in 1983, while visiting family in my hometown of St. Louis. My parents insisted that I dine at Café Hamton which was owned by a young chef touted as the next Wolfgang Puck. David opened his restaurant at age 20, too young to even qualify for a liquor license.

Dinner was impressive and, like Wolfgang, included “designer” pizzas – not of the heavy tomato sauce variety, but with innovative combinations of fresh vegetables, savory sauces, herbal pestos and the like. How do I remember? Because both David and the meal were memorable.

I hung out with David after the restaurant closed that evening. I deemed myself a serious foodie and shared in David’s excitement as we toured the kitchen and the bins of vegetables picked fresh from his garden adjacent to the café.

Inspired by chefs like Alice Waters and the California cuisine movement, David’s style of “clean” cooking has always been driven by local and sustainable ingredients.

Sear fish in a hot cast iron pan with the ramps until just firm.Toss lettuce with extra virgin olive oil, a pinch of salt and cracked pepper. Set (2) pieces of the fish on each of (2) plates. Top with ramps and lettuces. Drizzle with pan juices.

There was a day back then when local farmer Bill Rauch’s rickety old truck broke down in front of Café Hamton. The truck was brimming with Bill’s organically-farmed zucchini, tomatoes and corn. He asked David if he’d be interested in any of the vegetables.

David, eyeing the largest zucchini he had ever seen, suggested that if Bill picked his zucchini at about four inches long and left the blossoms intact, he’d take whatever was offered along with other baby vegetables. Bill took pride in his oversized zucchini and found David’s request very strange, but he was game. And so a relationship was formed around growing specialty vegetables and cooking with local, seasonal foods. What Bill couldn’t provide, David grew in his own garden.

Following an apprenticeship with Gerard Vie at Tros Marches in Versailles and A. Beauvillier in Paris, David opened the highly-acclaimed La Veranda in Beverly Hills – which is where I, again, crossed paths with him and often indulged in his cooking.

In 2005, David opened Park Ave Restaurant and Il Garage Ristorante on what was once a dairy farm. Though Stanton in Orange County was an unlikely town for fine dining, the property allowed for a small-scale farm as the centerpiece of the restaurant complex. With about 8,000 square feet of garden space, David put in 16 raised beds and several in-ground beds where, with the assistance of a full-time gardener, he continues to grow Thumbelina carrots, baby beets, Tatsoi spinach, purple broccoli, kumquats, leeks, ramps, and a wide variety of lettuces, among other crops.

Furthering his passion for farming and now winemaking, David purchased a vineyard and Tuscan-inspired farmhouse in Lompoc in 2017. Park Ave and Il Garage were well-established, and David and his wife Gale saw the investment as an ideal opportunity to slow down.

“It was to be a relaxed project growing Pinot Noir and Chardonnay along with a variety of vegetables and fruits, including a grove of olive trees,” explained David. “On top of that, the farmhouse makes for an unique venue for weddings, fundraisers, corporate gatherings, and other events. It’s a very special place to be.”

I can personally attest to that.

I first tasted sea urchin, also known as uni, the roe of the urchin, on a friend’s boat docked on Catalina Island. Others in our party went di…

Shortly after David bought in Lompoc, I relocated from LA to Solvang and was invited to a remarkable meal prepared by David in his farmhouse kitchen at Slay Estate & Vineyard. The fresh fish showed off varied flavors of citrus, sweetness, salt and spice, complemented by earthy baby lettuces artfully scattered over the dish. If the food was exceptional, the setting was magical as the sun set over the surrounding vineyards and gardens. I was no longer in Lompoc but transported to a romantic villa in Italy.

David’s intentions to slow down were sincere until a friend contacted him about a restaurant for sale in Manhattan Beach where David and his family call home. The deal was too good to pass up. Shortly thereafter, a second restaurant became available a few doors down.

“It was nothing that I was looking for,“ insisted David. “But there’s high demand for good food in Manhattan Beach and I couldn’t resist. Both restaurants have been successful from the start and a lot of fun. It’s a community, not unlike the kind of community that exists in the Santa Ynez Valley.”

David shuttered his four restaurants, and he and Gale retreated to their Lompoc farmhouse where they started boxing up vegetables and cooking meals to share with their neighbors, just as small-scale farmers are doing everywhere. But as the pandemic carries on without any promise of an end, David has now returned to one of his kitchens in Manhattan Beach to prepare comfort foods for curbside pickup. Farming and cooking may be a passion, but the restaurant business is…business after all.

“Coming out of this crisis, my schedule is going to be different,” David explained. “I’m going to curtail my hours at the restaurants and enjoy life a little more. The pandemic has been an eyeopener. I’ve been going full speed for a long time and that needs to change. But not quite yet. We’re a family-run operation with four restaurants to maintain and fields of crops that require attention. We’re back to business however possible for now.”

Jamie Edlin: 'The Starter Farm' puts down roots in the Santa Ynez Valley

New columnist Jamie Edlin visits Santa Ynez property The Starter Farm and shares the benefits of the farm to table movement from a local perspective.

Campbell Ranches, which runs farming and produce stand operations in the Lompoc Valley, donated about 40 cases — equivalent to about 1,500 pounds — of assorted vegetables to the staff at Lompoc Valley Medical Center. The food was delivered Friday morning and then distributed throughout the day to employees.

If you are old enough to remember the polio epidemic of the 1950s, there are a lot of similarities. Movie theaters closed and that was a big blow, no TV or internet.

Following the postponement of the 14th annual Santa Barbara Wine Country Half Marathon due to social distancing restrictions brought on by the COVID-19 crisis, event spokesman Dan Cruz recently announced that a new date has been set.

Elaine Revelle: Everything but the kitchen sink

Nagy is an industry veteran and Santa Maria native.

The family-friendly, small-scale Santa Maria farm offers both pesticide-free blueberries and strawberries for the picking.

“We were having such an amazing eight months before this all happened. Now we’re fighting to pay our rent and just trying to stay afloat.”

Jamie Edlin: I brake for mushrooms at Wolfe Family Farms

The hand-made sign on Fredensborg Canyon Road has been catching people’s attention.

Jamie Edlin: Playing in the dirt at Forbidden Fruit Orchards

In 2002, Sandy settled on 100 acres in Lompoc’s Cebada Canyon. There were no roads. No wells. Just dying apple trees and lots of sand. Always up to a worthy challenge, Sandy figured that she could bring the land to life with grapes and other crops.

Chef-Grower David Slay at work in the Kitchen.

David Slay’s Tuscan-inspired farmhouse, vineyard and gardens in the Santa Rita Hills, a romantic venue for weddings, fundraisers, and other gatherings.

David Slay grows produce in the Santa Rita Hills for his California-based restaurants.