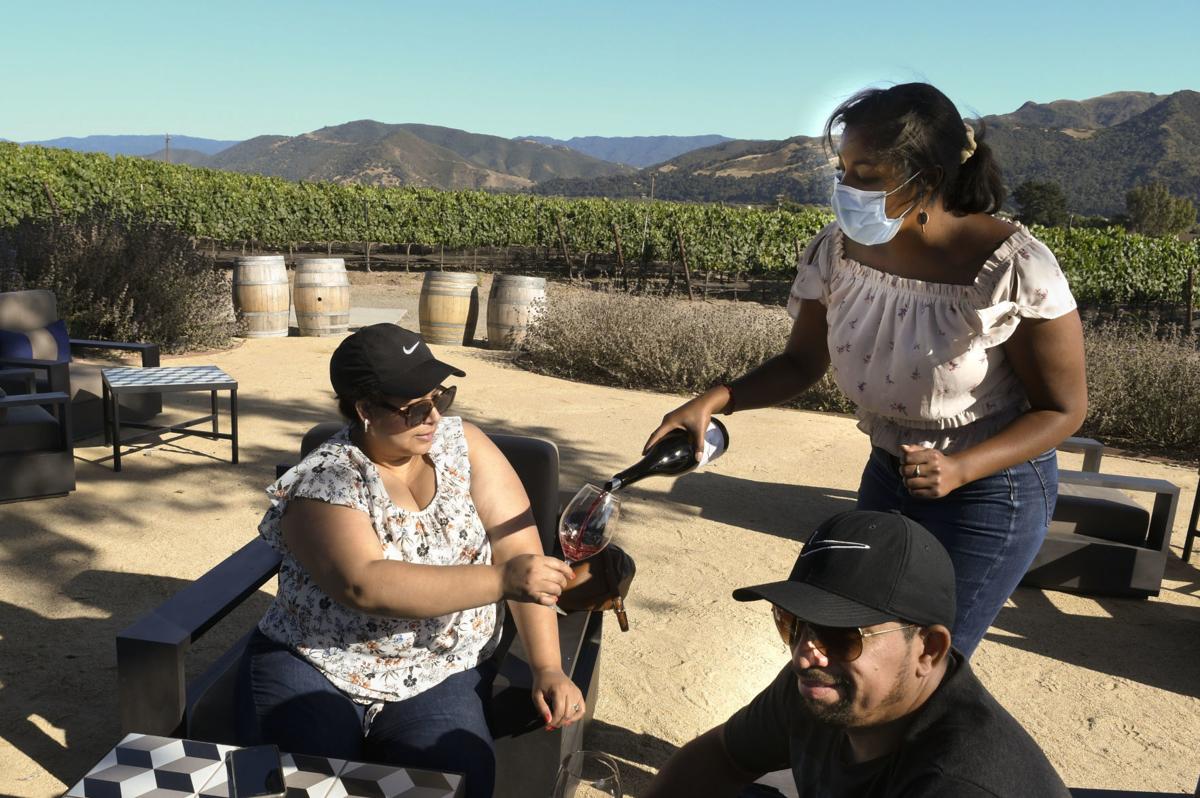 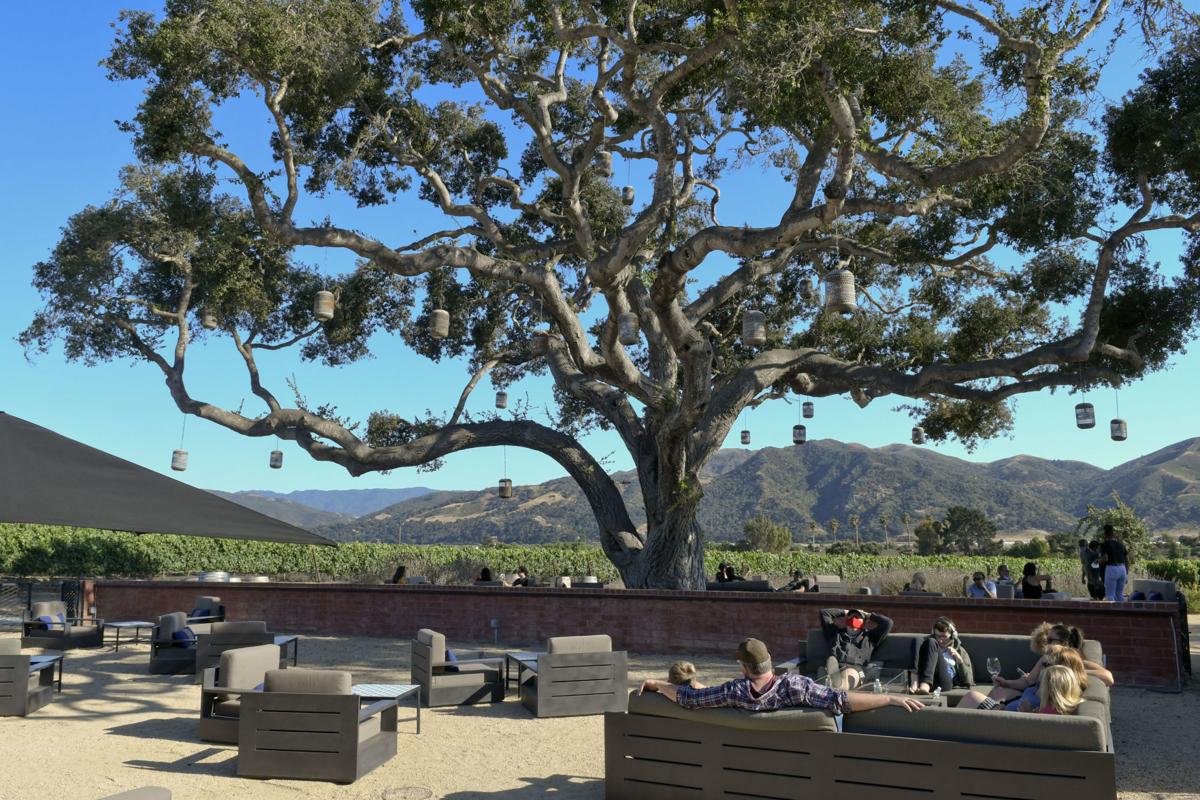 Wine tasters sit outside at the Brick Barn Wine Estate in Buellton on Friday. 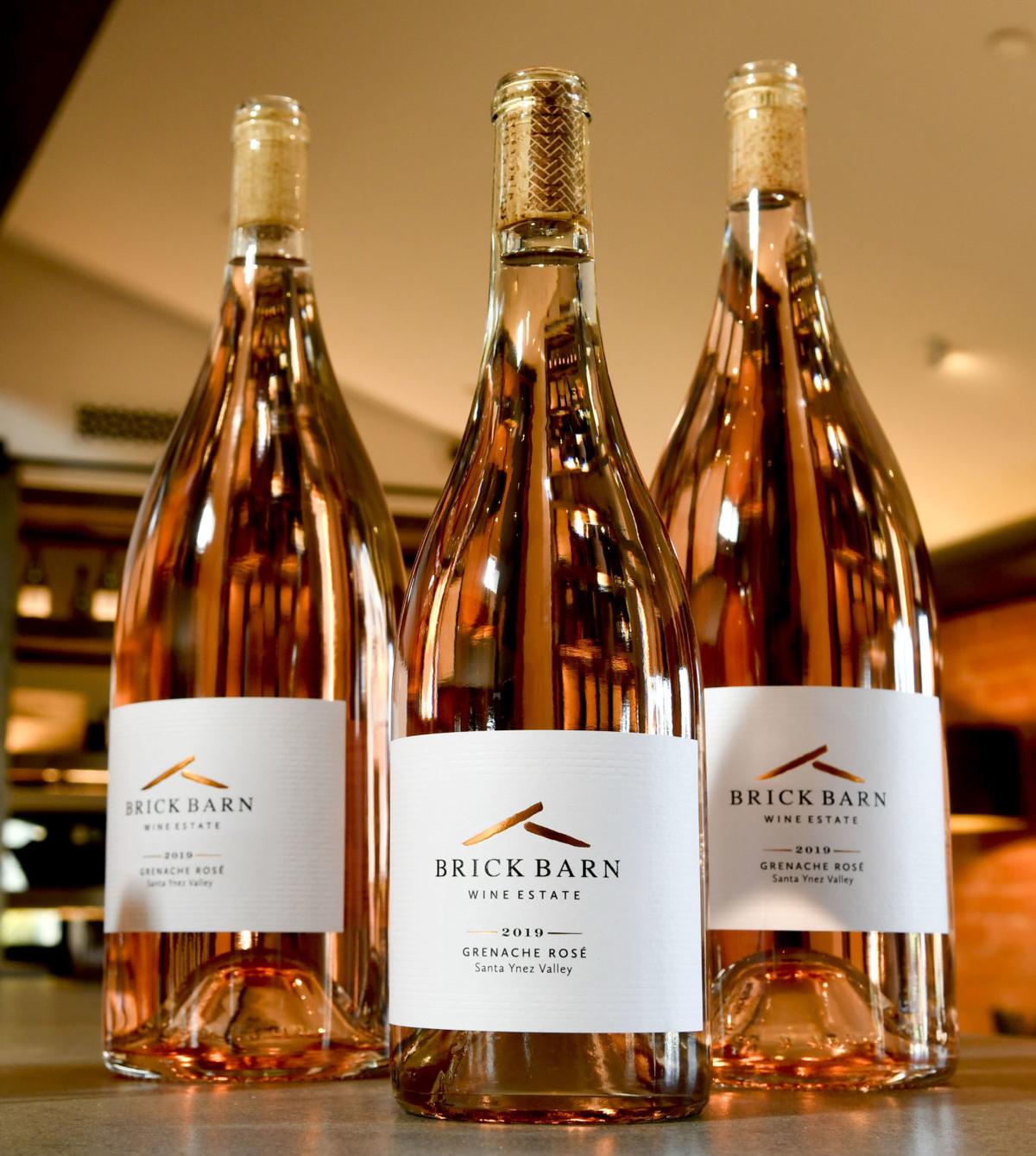 Bottles of Grenache Rosé are shown at the Brick Barn Wine Estate in Buellton on Friday. 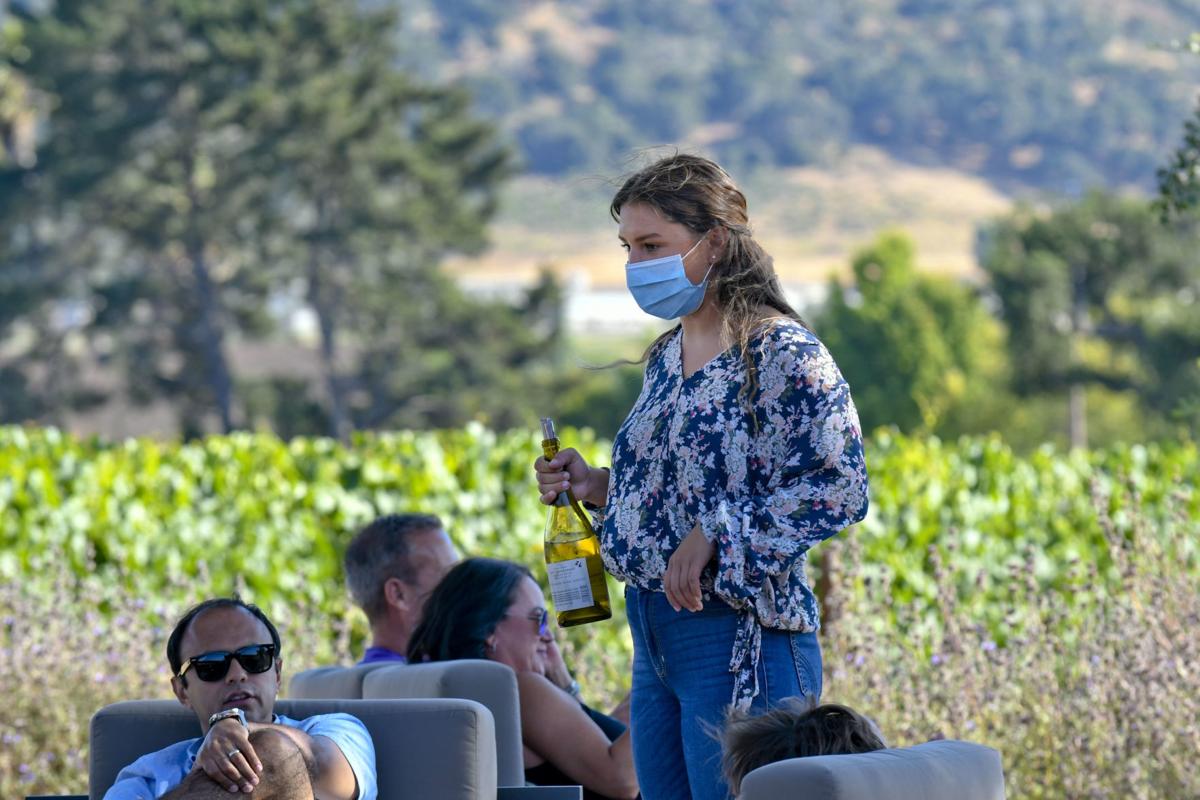 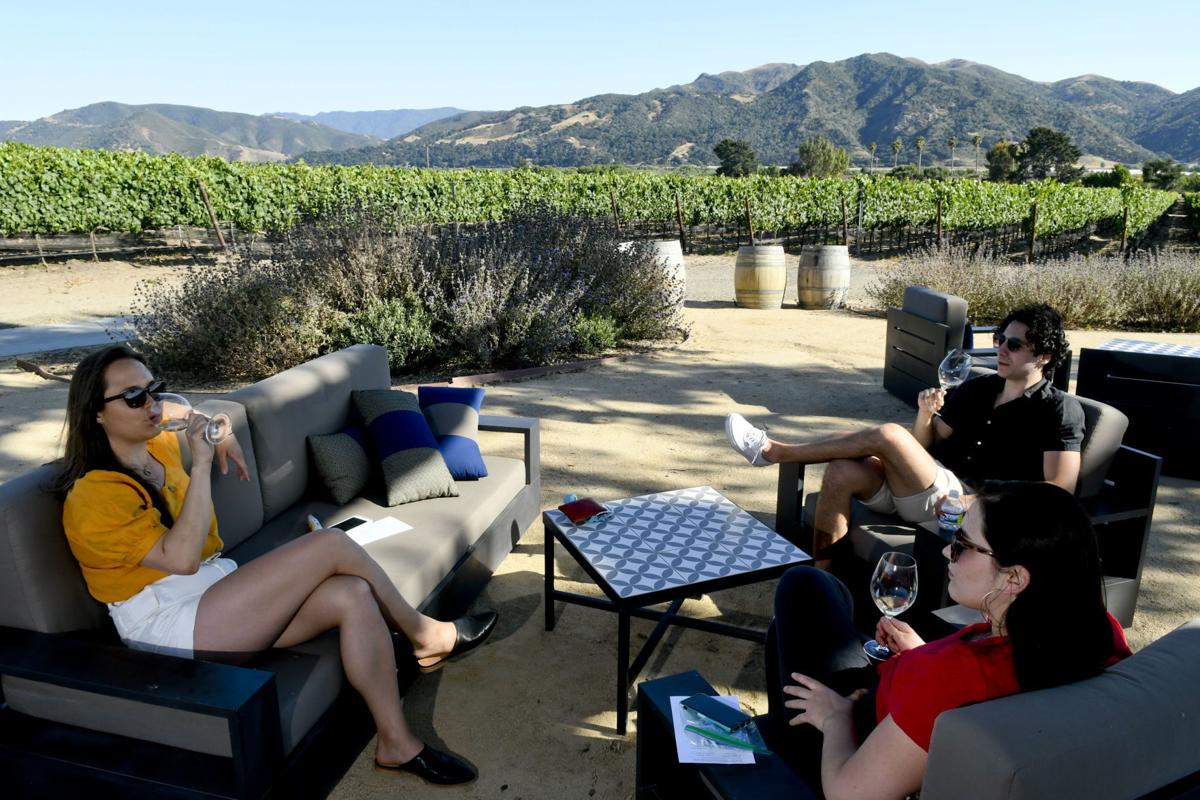 Elisabeth Sweet, of the Santa Ynez Valley, left, Meghan Case, of Baltimore, and Alexander Filice, of Toronto, Canada, taste wine at the Brick Barn Wine Estate in Buellton on Friday.

Already reeling from a wine glut and a softening of consumer demand, wine grape growers were hit with another economic punch by COVID-19 as the effort to slow its spread shut down restaurants, bars and tasting rooms.

Statewide, the wine grape growing industry could lose as much as $437 million in revenue as sales dry up in the face of low demand, according to the California Association of Winegrape Growers, citing an analysis by an industry expert.

Santa Barbara County growers said it could be years before the local wine industry can push its way back up into the climate of success it enjoyed a few years ago.

“I’ve never seen so much uncertainty in the marketplace,” said Mike Testa, a Santa Barbara County grower and chairman of the California Association of Winegrape Growers. “Growers are struggling to find a home for their fruit, vineyard acres are being pulled out and our winery customers are experiencing extraordinary challenges. For many growers, getting paid this year is no sure thing.”

But county wine grape growers also said the industry is naturally cyclical and will recover. It’s just that the valley in this cycle is more like a canyon because of what one local vineyard manager called a “double whammy.”

“It’s going to take a couple of years to get up to where it should be,” said Kevin Merrill, of Mesa Vineyard Management, which manages vineyards up and down the Central Coast.

The analysis predicting a $437 million loss from COVID-19 came from Jon Moramarco, managing partner of wine industry consulting firm bw166 and editor of the Gomberg-Fredrikson Report that’s tracked wine sales and imports since the 1940s.

Moramarco said the state’s growers were already facing an estimated loss of $395 million in revenue from the glut of wine produced from the bumper crop of grapes in 2018.

When that anticipated $395 million loss is combined with the predicted $437 million loss from an economy ruptured by COVID-19, California’s wine grape growers collectively could lose $832 million from March 2020 to February 2021, Monmarco said.

“It is essential that the U.S. Department of Agriculture recognizes the harm COVID-19 has caused our markets, and winegrape growers need to be included in the next round of financial assistance for agricultural producers,” Testa said.

Santa Barbara Vintners, which supports and promotes the county’s wine and grape industries, didn’t respond to a request for comment on losses faced by the county’s growers.

But given that wine grapes are the county’s second-most valuable crop, worth more than $121.3 million in 2018, and wine tourism is a major economic driver, it’s likely the impact to county growers will mirror statewide losses.

“We just came off two big harvests, which filled the tanks up with wine,” Merrill said. “That didn’t help us any. And then we got hit with coronavirus.”

To slow the spread of COVID-19, the disease caused by the virus, the state shut down the restaurants that bought high-end wines as well as winery tasting rooms that sold more expensive wines directly to the public.

“Wineries are selling wines in the stores for $10 to $15 a bottle,” Merrill noted. “But those [higher-priced wines] they sell to restaurants, where they make their money, aren’t selling because the restaurants are closed."

Although restaurant sales have slowed “way down to almost nothing,” he said the demand had increased for low-end wines among people forced to stay home.

“So if there’s a bright spot, that’s it,” Merrill said.

Jim Stollberg, owner of Riverbench Vineyard & Winery in the Santa Maria Valley, said the 2018 and 2019 heavy harvests kept prices from increasing the anticipated 6% to 7% and held them to 1% to 3%.

“That’s going to right itself over time with more grapes coming out of the ground,” Stollberg said. “A lot of vines came out over last winter.”

He said growers will either allow the land where vines were removed to lie fallow for a year or two or lease it out for growing other “nonpermanent crops” like strawberries.

“They’ll do that while they’re trying to decide what variety to plant next,” he said, explaining that wouldn’t be a change to new varietals from the ubiquitous chardonnay and pinot noir but a change in their ratios.

“I’d love it if there was a new variety that would carry us for the next 10 or 20 years, but I don’t see that,” Stollberg said.

He agreed that wineries were hurt by the closure of restaurants and tasting rooms.

“But they did recoup some of that loss with direct sales,” he said.

“It’s been pretty devastating in certain ways,” Miller said. “A lot of those [small wineries] depend on consumer tasting rooms. The county was hit so hard when they shut the tasting rooms.”

He said his family operates tasting rooms in Santa Barbara, where business is coming back relatively strong, and Los Olivos, where it’s improving a little, but with requirements for social distancing, they can’t handle the number of customers they did before.

“The way a lot of wineries coped, we saw an increase in direct-to-consumer sales,” Miller said, but added those were offset by deep discounts offered to draw more online customers.

Like the others, Miller believes the industry will recover but it will be a changed industry that relies more on e-commerce and less on restaurant and tasting room sales.

“We will come back,” he said. “We’ll just come back differently. The wine industry is going to look very different in 24 months than it did 12 months ago.”

'Sky's the limit with him': Late Lompoc winemaker, Steve Arrowood, remembered by family

"Steve inspired people. He was the social butterfly who encouraged others."

Born into a viticultural family in Pomerol, France, Rolland graduated with a degree in Oenology from the University of Bordeaux and spent the early part of his career managing and growing his family’s estates in Bordeaux.

Jamie Edlin: Playing in the dirt at Forbidden Fruit Orchards

In 2002, Sandy settled on 100 acres in Lompoc’s Cebada Canyon. There were no roads. No wells. Just dying apple trees and lots of sand. Always up to a worthy challenge, Sandy figured that she could bring the land to life with grapes and other crops.

Beginning today, Wednesday, June 17 and through at least July 4, the outdoor market will be located on the temporarily-closed-to-traffic sections of Solvang's Copenhagen Drive, between Alisal Road and Second Street.

Wine tasters sit outside at the Brick Barn Wine Estate in Buellton on Friday.

Bottles of Grenache Rosé are shown at the Brick Barn Wine Estate in Buellton on Friday.

Elisabeth Sweet, of the Santa Ynez Valley, left, Meghan Case, of Baltimore, and Alexander Filice, of Toronto, Canada, taste wine at the Brick Barn Wine Estate in Buellton on Friday.