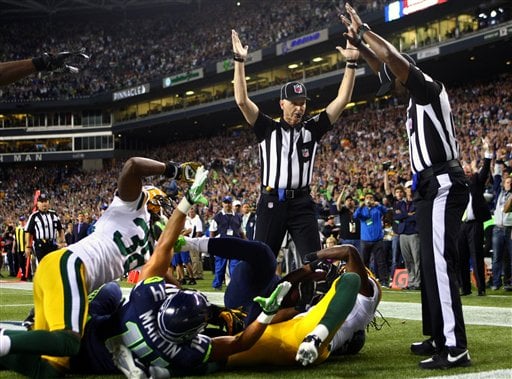 Officials, including Santa Maria resident Lance Easley, on the left signaling touchdown, after Seattle Seahawks wide receiver Golden Tate pulled in a last-second pass for a touchdown from quarterback Russell Wilson to defeat the Green Bay Packers 14-12 in an NFL football game, Monday in Seattle. The touchdown call stood after review and has caused a national uproar. 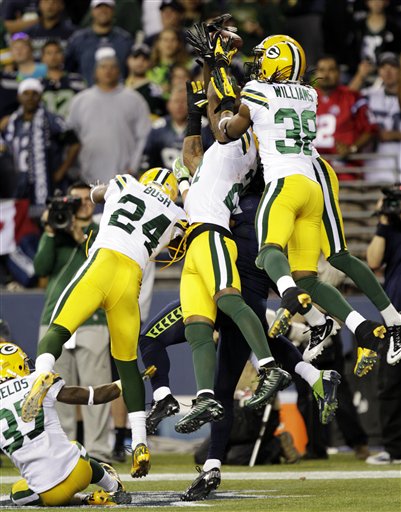 Seattle Seahawks wide receiver Golden Tate, obscured, comes down with the ball in the end zone for a touchdown as Green Bay Packers' Jarrett Bush (24) and Tramon Williams (38) defend in the second half of an NFL football game, Monday in Seattle. The Seahawks won 14-12.

We all knew it was going to come to this.

After weeks and weeks, we knew this was going to reach some chaotic climax.

It happened Monday night and it hit home right here in Santa Maria.

Longtime Central Coast referee Lance Easley, the side judge No. 26, was the one who ruled Seattle's Golden Tate had hauled in Russell Wilson's 24-yard TD pass.

Easley had no prior professional or major college football experience before this season. He works as a banker here in Santa Maria. He was the only member of the officiating crew with no professional experience.

His call was beyond controversial and it would be surprising if he officiates another NFL game.

Multiple replays showed M.D. Jennings, of the Green Bay Packers, intercepting the pass, coming down with both arms wrapped around the ball as Tate had one armed on the ball. It clearly looked like Jennings picked it off and still retained possession of the last-second pass after the scrum to give the Packers a 13-7 win.

At the very least there was blatant offensive pass interference on Tate that wasn't called.

The other referee Derrick Rhone-Dunn signaled an interception and touchback.

But, Easley's decision of a touchdown was then "confirmed" upstairs by the officials. Those replay officials had no choice but to rule it a catch, giving the Seahawks a 14-12 win. There was such confusion that players had to retrieve their helmets from the storage bins 10 or 15 minutes after the ruling as Seattle kicked the bizarre extra point.

Analysts and former players are already calling it the worst call in NFL history. Check out Packers tight end Tom Crabtree's Twitter account to see how he feels about it.

Ah, what a night for the NFL. Somehow a guy laying underneath the player who just caught the ball can put his hand on the football and have it ruled a touchdown.

Referees can't review who caught the ball. That's not a challengeable play.

Whoever the refs said caught the ball, that's who caught the ball. I think Easley got confused. He had to have thought the Packer player was on offense, saw he had the ball and ruled it a touchdown. That's the only logical explanation. It was clear Tate didn't have possession.

And the world is set afire.

Can you blame Easley? That's the primary question 'round these parts.

Easley is a "small-time" ref who officiates many Central Coat football and  basketball games. High school and JC. He was even on the planning commission for the FCA All-Star game.

Before this game ever happened we here at the Santa Maria Times knew Lance was one of the replacement officials. Check out the photo we used of 49ers coach Jim Harbaugh chewing him out during the preseason.

I think you can blame Easley. Sure, people will say that he was put in a tough spot, that he was bound to be thrown into the spotlight of scrutiny.

But, I say, Easley threw himself into the fire. He, as a replacement ref, or as his brethren would call him a "scab," knew what he was getting into.

He knew he couldn't handle the NFL. The officials in the NFL were the best of the best.

But Easley and the rest of the replacements can't handle the speed of the NFL.

The previous two weeks, I've noticed many problems with these referees, but the primary problem I saw was this: The game is WAY too fast for them.

There's so many things going on at once at such a high speed, these replacements can't keep up. It finally came to an ugly head Monday night.

In the end, we shouldn't blame Lance, we should blame the system and Goodell for fluffing up his ego and putting us all in the situation. The NFL is exerting its power, it won't bow down to officials.

For the last eight or nine seasons, my family has paid thousands of dollars to pay for the NFL's Sunday Ticket on DirecTV to watch the St. Louis Rams.

There are millions of families across the country and the globe who have done the same, albeit for different teams, but we deserve better than this. I feel more sorry for Packers fans than I do Easley.

If the NFL and Goodell can't break off a little extra change for these refs, then we might as well stop watching.

This is my prediction: Easley and the rest of the refs are done. The regulars are back this week. I don't think anyone would argue that call.

Officials, including Santa Maria resident Lance Easley, on the left signaling touchdown, after Seattle Seahawks wide receiver Golden Tate pulled in a last-second pass for a touchdown from quarterback Russell Wilson to defeat the Green Bay Packers 14-12 in an NFL football game, Monday in Seattle. The touchdown call stood after review and has caused a national uproar.

Seattle Seahawks wide receiver Golden Tate, obscured, comes down with the ball in the end zone for a touchdown as Green Bay Packers' Jarrett Bush (24) and Tramon Williams (38) defend in the second half of an NFL football game, Monday in Seattle. The Seahawks won 14-12.