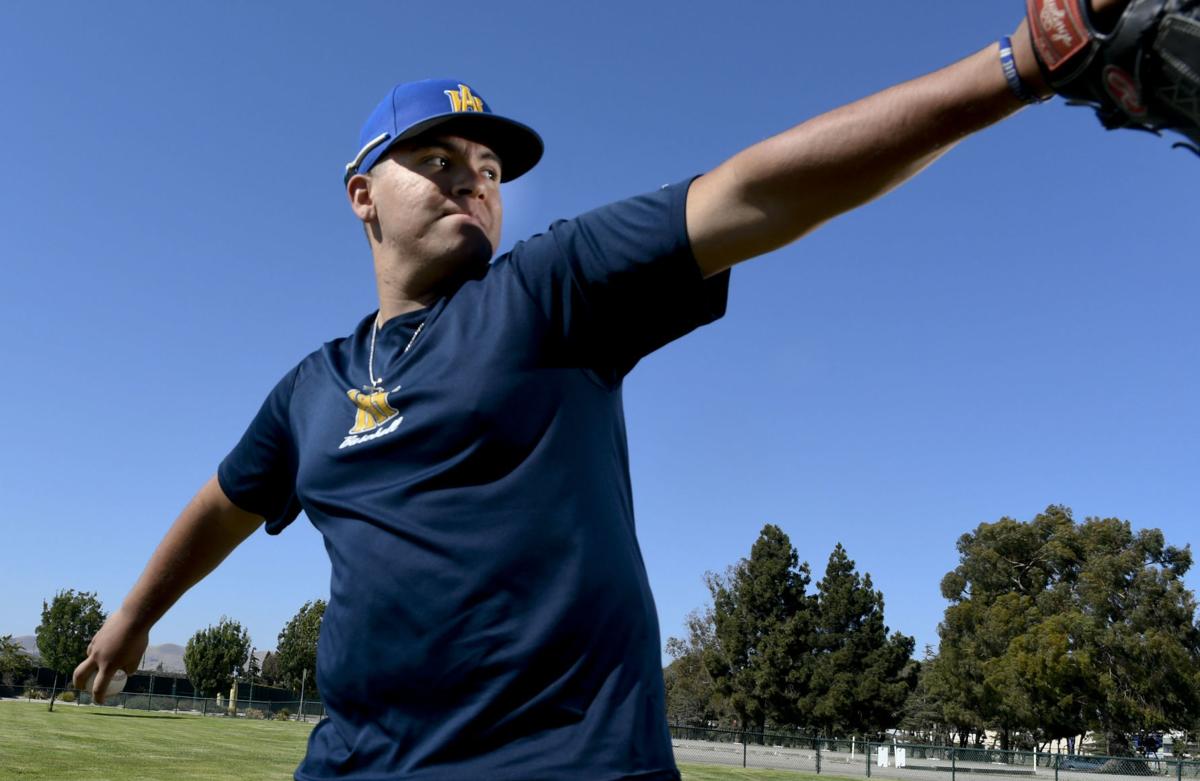 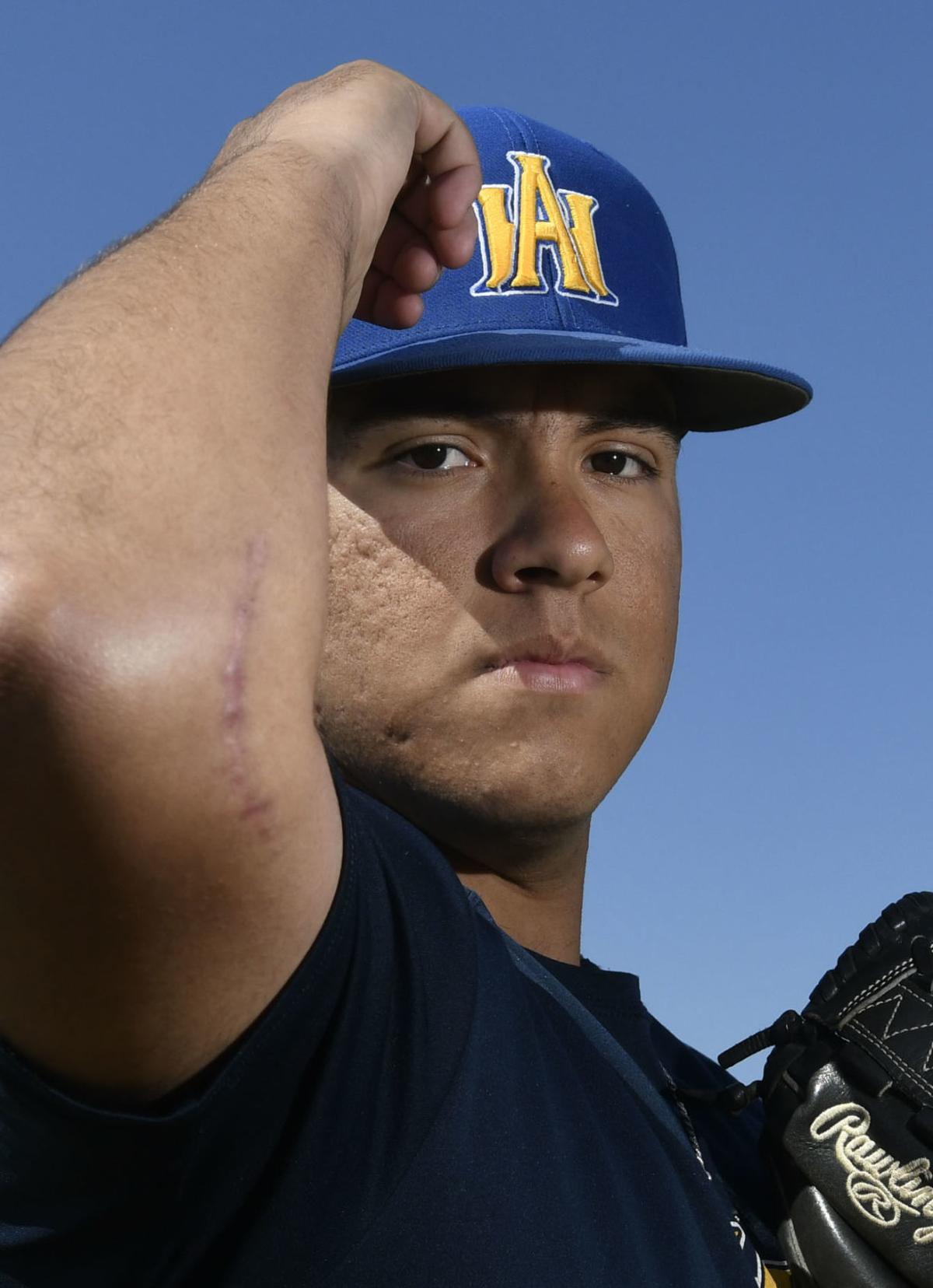 Former St. Joseph High pitcher Isaac Baez shows off the scar on his throwing elbow after undergoing Tommy John surgery late last year. He hopes to be ready to pitch for the 2021 season at Hancock. 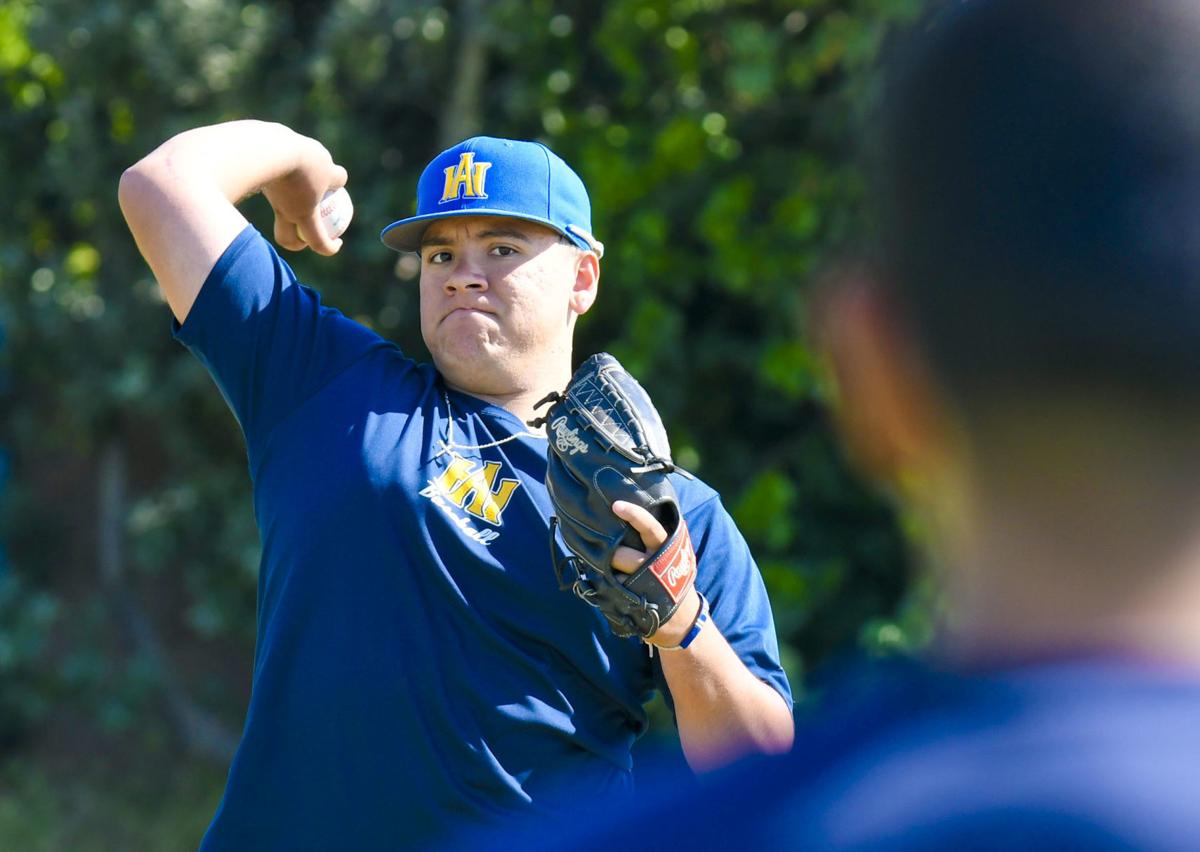 He actually threw farther than the distance from the pitcher’s mound to home plate.

“I stretched it out to 90 feet,” said Baez “I just threw the four-seam fastball. The arm felt great. I felt fine.”

Baez said he is on “week four or five of a 15-16 week rehabilitation plan.“ In 2019, Baez, who graduated from St. Joseph and was the Knights’ No. 1 starter, was an integral part of the Hancock staff.

“I’ll start throwing the change up before I throw the curve.”

For now, as per doctor’s orders, “I’m not allowed to throw anything but the four-seam fastball,” said Baez.

After undergoing the Tommy John surgery, “I was released from the hospital the same morning,” said Baez.

Up until Friday, Baez said, he had been playing pretty much glorified catch with some teammates in his rehab process.

The day before he threw at Hancock Baez said, “Overall, I’m not working on pitching just yet. I’m getting the feel of playing ball again.”

With the 2020 Hancock team sitting at 11-10, the COVID-19 pandemic wiped out the rest of the Bulldogs’ season.

Because of the Tommy John surgery, Baez was sitting out that year.

The higher-ups at the California Community College Athletic Association (CCCAA), which Hancock is a member of, elected to give affected athletes their season of eligibility back as long as they were in good standing with their respective teams when the rest of the CCCAA 2020 spring season was scrubbed.

“I’m really looking forward to getting that year back and, with the rest, coming back stronger,” for the 2021 season, he said.

Baez started 27 games over three varsity seasons with St. Joseph, accumulating a 1.89 ERA and a 13-10 win-loss record. He amassed 160 innings, giving up 140 hits while striking out 120 batters and issuing 42 walks. He threw 13 complete games with the Knights with three shutouts.

Righetti was 4-4 when the 2020 season suspended and eventually canceled. Would the Warriors be able to repeat as league champs? Could they play even deeper into the playoffs? Could this deep group of veteran players bring Righetti that elusive CIF title?

McCoy's career statistics at Santa Ynez are hard to fathom. He threw for over 2,500 yards and 23 touchdowns as a quarterback. He also accumulated over 1,000 career rushing yards with 13 career touchdowns. (He has three touchdown runs over 95 yards). McCoy also amassed more than 500 receiving yards and five touchdown catches.

Former St. Joseph High pitcher Isaac Baez shows off the scar on his throwing elbow after undergoing Tommy John surgery late last year. He hopes to be ready to pitch for the 2021 season at Hancock.