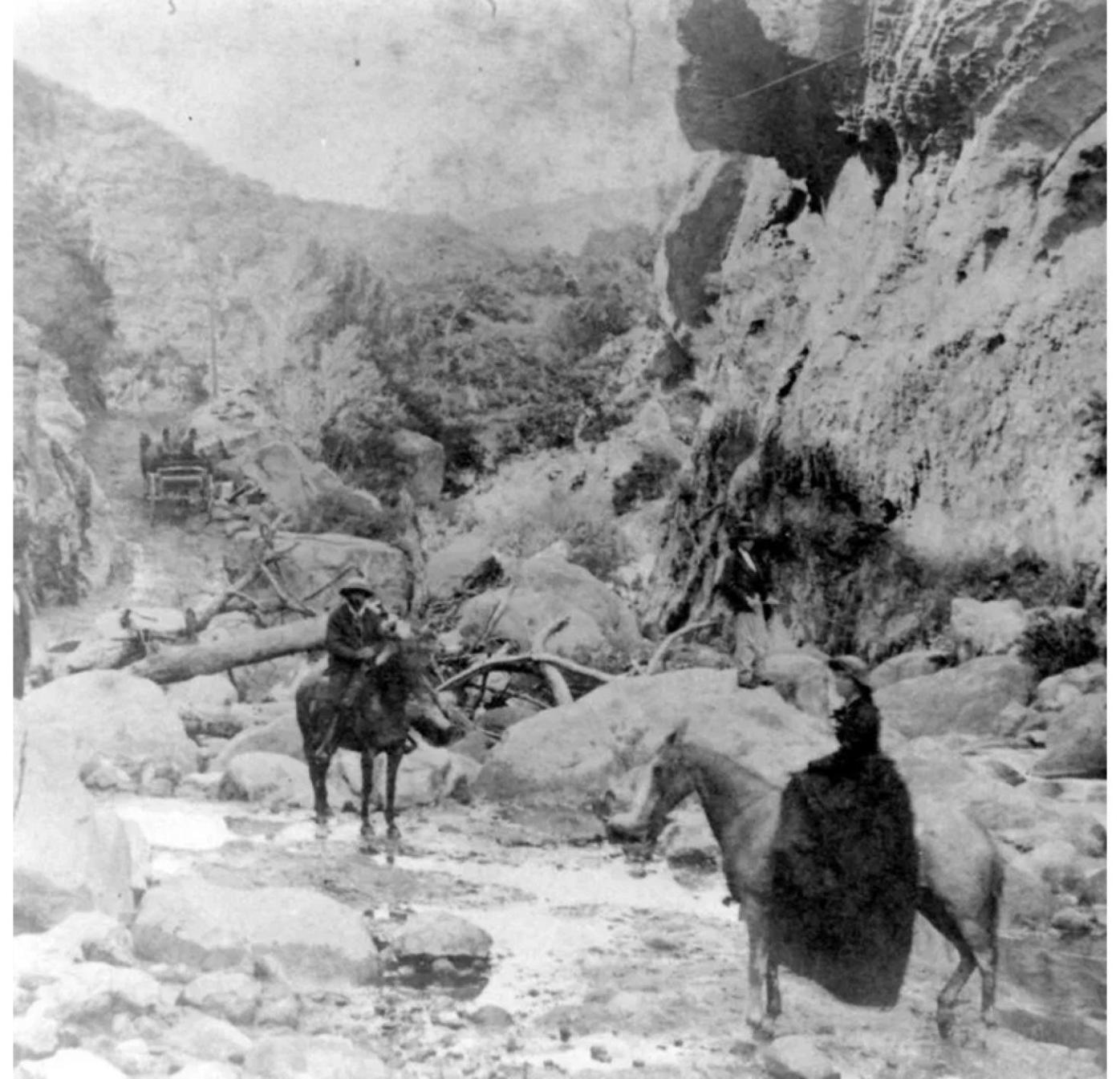 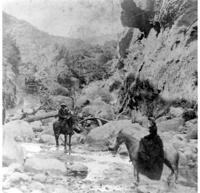 An archive image depicts a time when the Gaviota Pass was as a challenging, all-terrain crossing for those on horseback and in carriage. 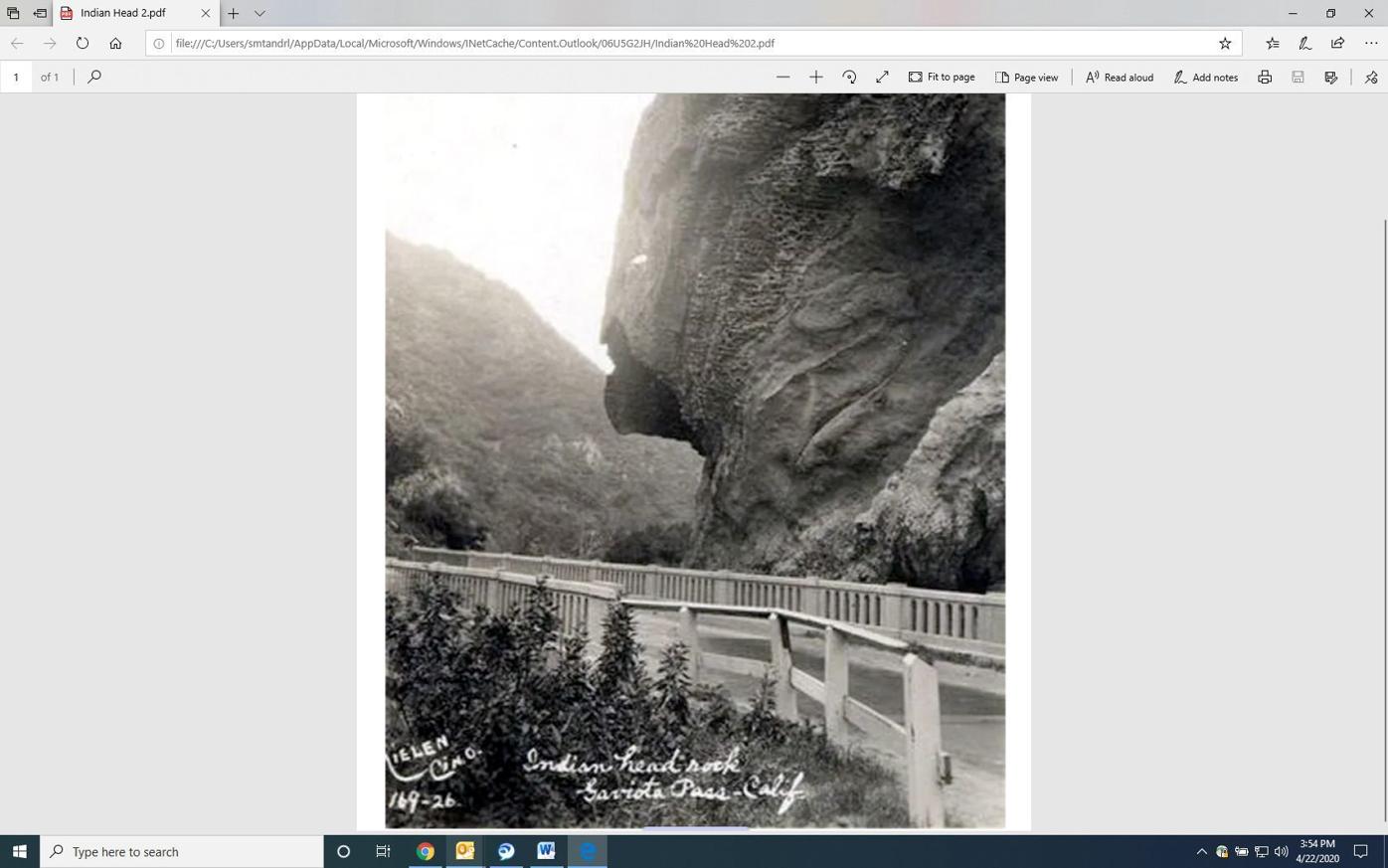 The naturally occurring “Stone Indian” rock formation that jutted over the westside of the Gaviota Pass during the 1920s, still remains today after safety modifications were made. 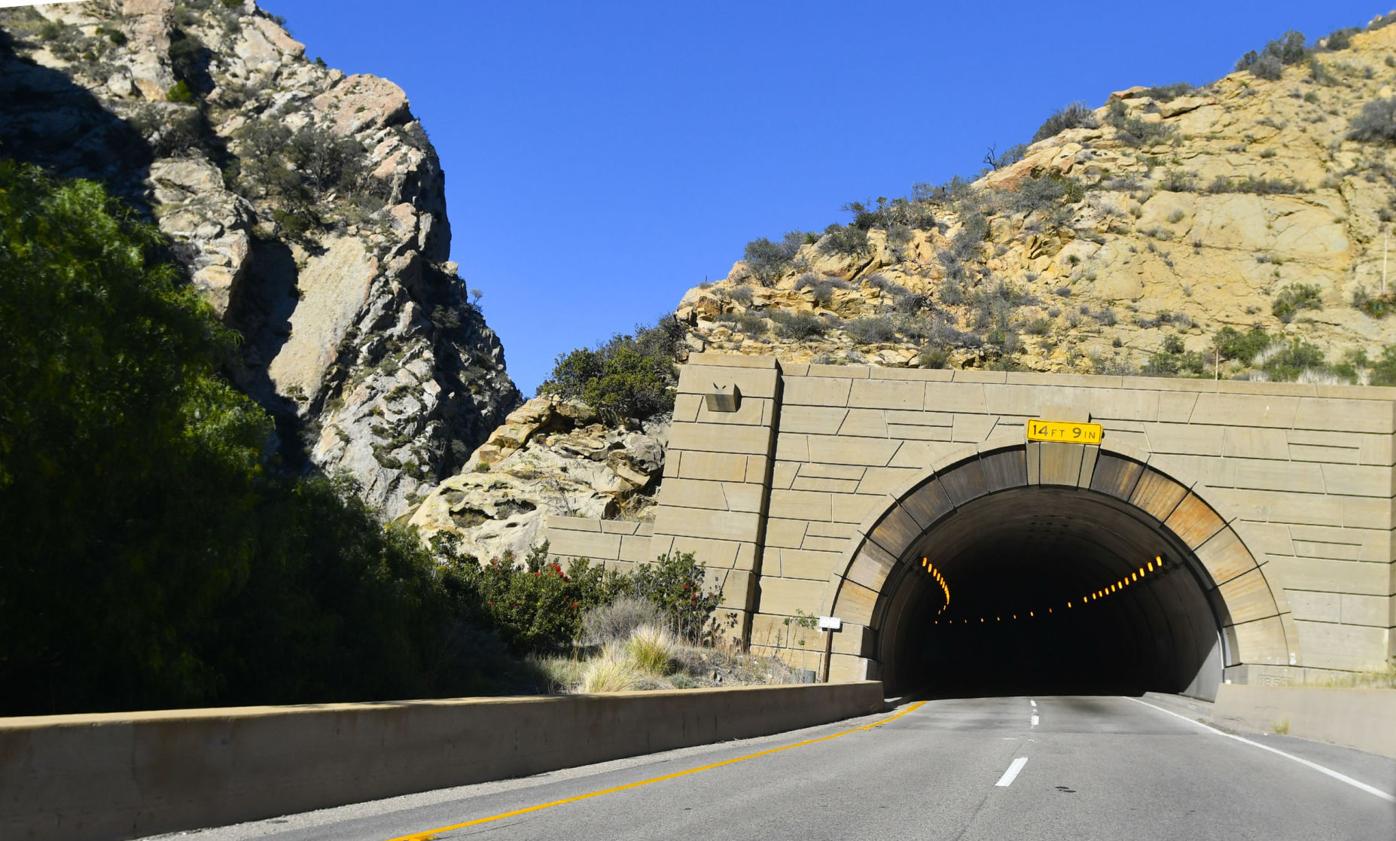 Motorists drive Highway 101 through the Gaviota Tunnel on a daily basis. 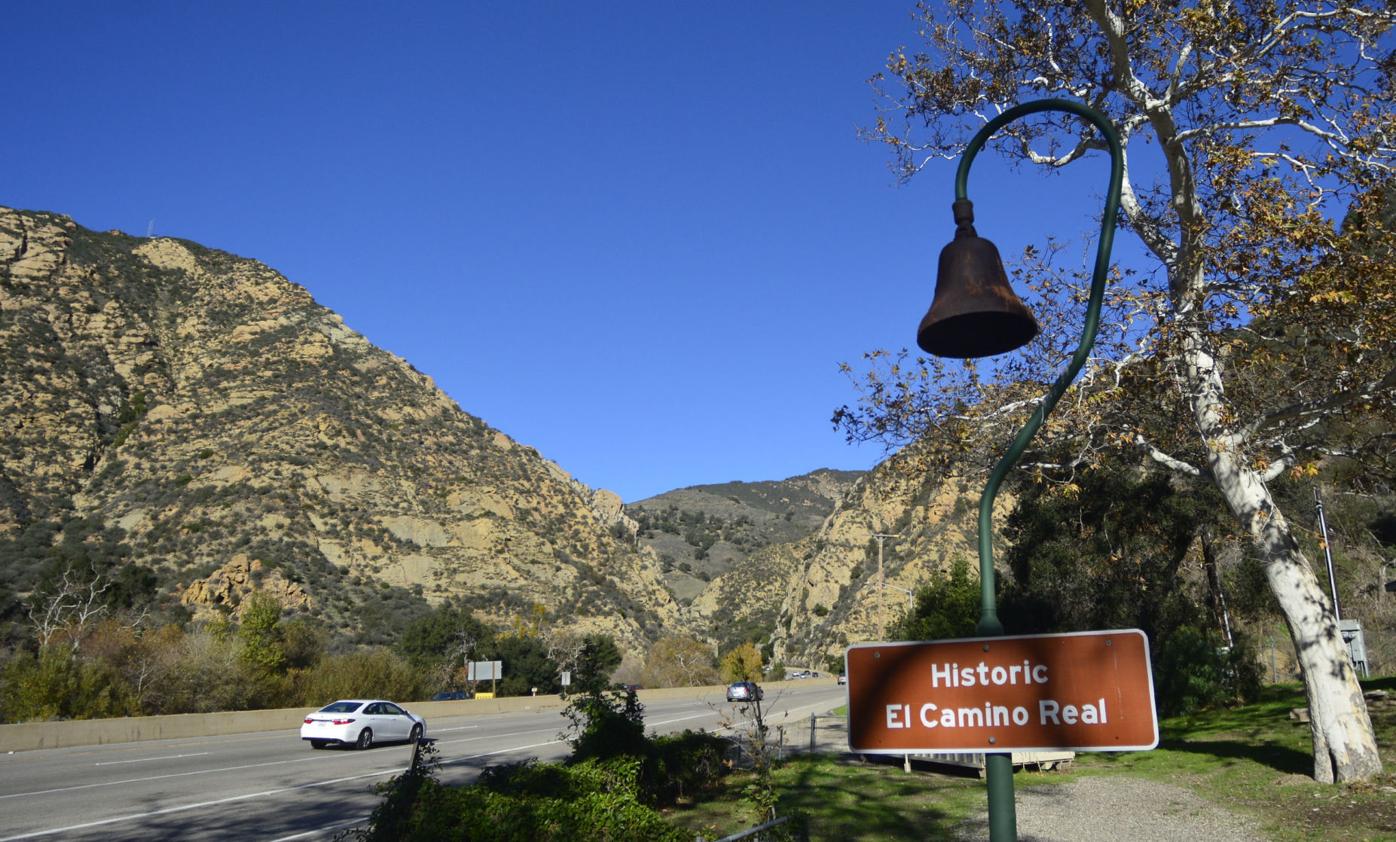 Motorists drive on Highway 101 near the Gaviota Tunnel.

An archive image depicts a time when the Gaviota Pass was as a challenging, all-terrain crossing for those on horseback and in carriage.

The naturally occurring “Stone Indian” rock formation that jutted over the westside of the Gaviota Pass during the 1920s, still remains today after safety modifications were made.

Motorists drive Highway 101 through the Gaviota Tunnel on a daily basis.

Motorists drive on Highway 101 near the Gaviota Tunnel.

When discussing ideas for my next article, my brother suggested that I do an article on the Gaviota Tunnel. I thought, “OK, the construction of the tunnel might be interesting,” but when doing the research, I realized the tunnel was just a small part of the history of Gaviota Pass. I hope you enjoy this article as much as I enjoyed doing the research to write it.

There are three passes in our area that go over the Santa Ynez Mountains from the coast: San Marcos Pass, Refugio Pass, and Gaviota Pass.

Gaviota Pass is the only pass that starts a sea level and was formed by a fissure in the Santa Ynez Mountains that allowed Gaviota Creek to carve out a passageway through the mountains. Peaks on either side are over 2,000 feet tall, and this fissure is the only break in the mountain range for hundreds of miles. The ancient Chumash used the pass to go between inland and coastal villages.

The first Spanish expedition to come up the California coast by land was led by Gaspar de Portola in 1769. One night they camped at a Chumash village on the beach called Onomyo. This village was near a small gap through the mountains that the natives used as a pass to get to inland villages. Father Juan Crespi kept a journal of the expedition and he named this camping spot, San Luis Rey de Francia, and noted “the soldiers know it as La Gaviota, because they killed a seagull there”.

The soldiers’ nickname stuck, as Gaviota means seagull in Spanish. Portola chose to continue north on the beach, as the Chumash passage through the mountains was deemed too narrow and dangerous for horses.

As more Spanish settlements and missions were built inland, journeys up and down the coast by the Spanish became common. Travelers chose to make their way through the rocky gorge pass instead of taking the longer and difficult beach route. However, Gaviota Pass was no easy route. It was often blocked by boulders that fell off the cliffs, flood waters, or by mud and debris.

Legend has it that in 1846, during the Mexican American war, explorer and U.S. Lt. Col. John C. Fremont and his army were camping along Alamo Pintado Creek (in what is now Solvang). His plan was to go through Gaviota Pass to attack and capture Santa Barbara.

Soldiers from the Presidio in Santa Barbara knew of Fremont’s plans and were waiting to ambush him as he and his army passed through the narrow gorge. Benjamin Foxen, an American settler in the Santa Ynez Valley, warned Foxen of the trap and guided Freemont over the rugged San Marcos pass instead. Santa Barbara was captured without firing a shot as the Mexican army was waiting at Gaviota.

Walker Tompkins, a Santa Barbara County historian, says this is not true and writes that the Mexican soldiers were in Los Angeles and Gaviota Pass was flooded at the time by heavy rains. Foxen may have thought they were at Gaviota. No matter the story, Freemont changed his plans and did go over San Marcos Pass. No one really knows the true story, but it makes for a great legend.

After the Mexican American War, the pass was in American hands. In 1854, chisels were taken to the rock walls to widen the trail enough for wagons to fit through. Passage was still treacherous, and the flow of the creek could make it impossible. Traffic continued to increase in the 1860s as more ranches developed in the Santa Ynez and Lompoc Valleys.

In 1861, dynamite was used to widen the pass and the first county road was finished with a wooden bridge over Gaviota Creek. Despite the improvements, heavy winter weather could still shut the new road down.

According to the Goleta Historical Society, the Gaviota Pass became heavily used by the Overland stagecoaches and relay stations which began to pop up along the route. Just as the legend of the Mexican army lying in wait for Fremont, the pass was a perfect spot for thieves and outlaws to prey on the stagecoaches and lone travelers. These bandits were the reason that folks traveling through Gaviota were usually well armed and especially cautious.

The pass got even busier when in 1875, the Dibblee and Hollister families built a wharf at Gaviota beach they called Port Orford. The 1000-foot wharf was used to ship out wool, livestock, lumber, and grain on steamships. Ranchers from the Lompoc and Santa Ynez valleys would drive their cattle, pigs, sheep or goats down across the bridge to the wharf to be shipped out.

By the early 1900s cars were beginning to travel the coastal highway and using the pass to get inland. These vehicles were faster, but were more delicate that the horse drawn wagons, so the road needed to be improved again.

In 1915 the California Division of Highways took control of the road through the pass, graveling, straightening and widening it. The wooden bridge was replaced by a steel suspension bridge.

By 1931 more improvements were added. The road was again widened, straightened, paved and a new concrete bridge replaced the steel bridge. This alignment serves as the southbound lane of the freeway to this day.

As the road was being widened and improved, there was a safety concern about the “Stone Indian” rock formation that hung over the west side of the road. Engineers recommended that the overhang be removed so that there was no danger of it someday falling on the bridge. But people had come to value the iconic rock and they protested its destruction. After some safety modifications were made, the “Stone Indian” head was saved and remains to this day.

For the next 20 years, the pass remained a narrow, two lane highway. However, after World War II, the government realized that the Coast Highway was so important that Gaviota Pass had to be improved. The highway was vital to west coast defense as well as becoming an important economic thoroughfare. Traffic was increasing, cars were going faster and needed a wider highway for safety.

To solve this problem, it was decided to build a tunnel through the rock on the east side of the road rather than remove massive amounts of rock from the mountain on the west side (and once again save the Stone Indian head).

Construction on the tunnel was started in 1952, bored out from the southside because there was no safe way to haul the dirt and rock out from the north end without putting the existing road in danger. The arched tunnel is 435 feet long, 35 feet wide and 18 feet high. The walls are made of 18-inch-thick, reinforced concrete. The first electric power lines in the Gaviota area were installed so the tunnel could be lit. It officially opened in May 1953, and the road had two lanes in each direction, as it does today.

During the earthquake of 1978, huge boulders were dislodged and came down on the highway, but luckily no one was hurt. Since then, Cal Trans has installed heavy metal mesh fencing on the most vulnerable areas to catch any falling rocks.

The next time you drive through this amazing fissure in the Santa Ynez Mountains, take a moment to appreciate its history and importance to the development (and safety) of our Valley.

More in 23 stories explaining the Central Coast's history, landscape, and traditions from Judith Dale (17 of 23)