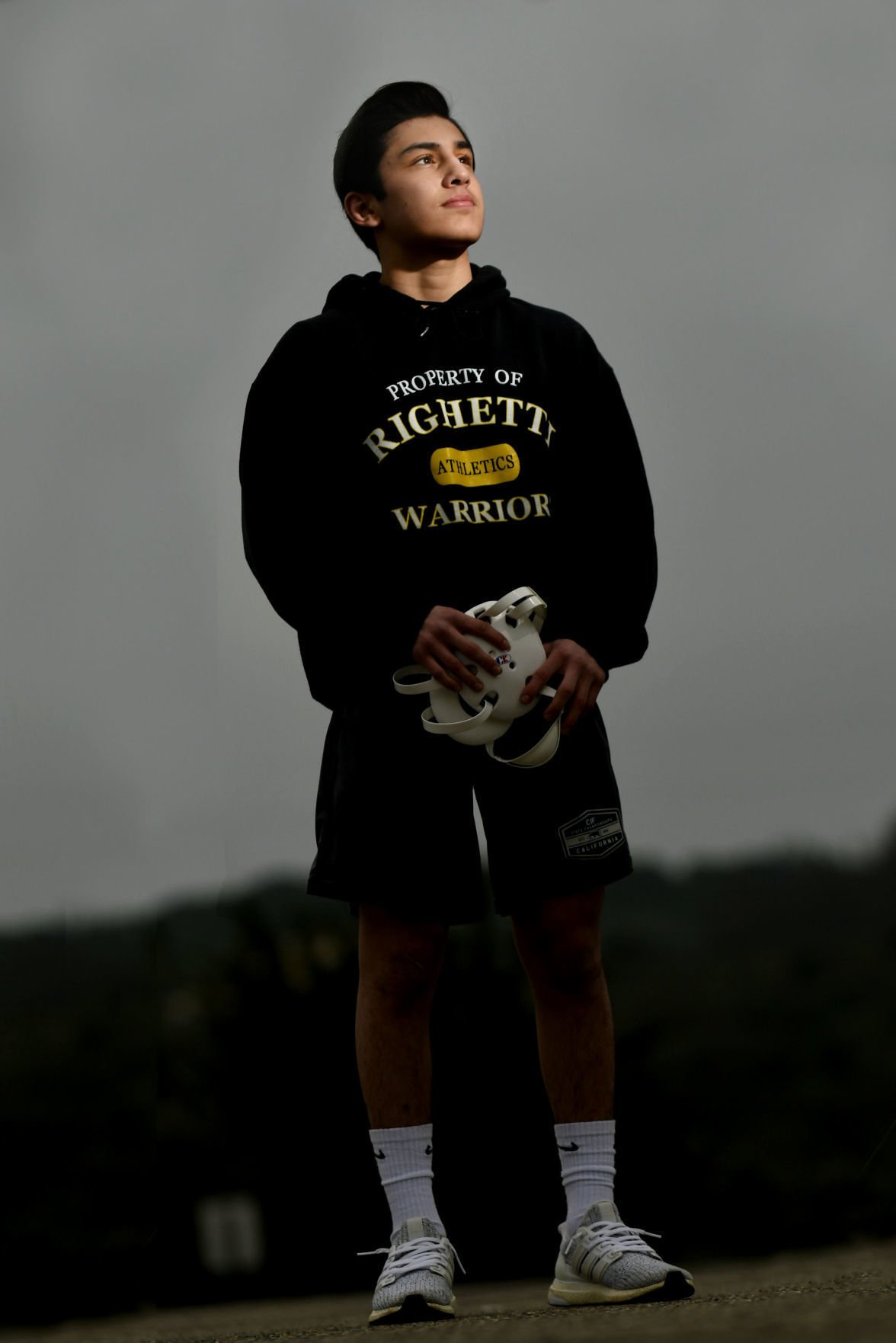 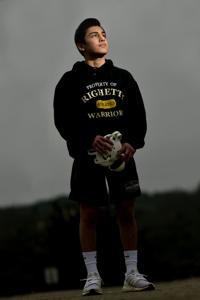 Righetti sophomore Dominic Mendez finished fourth at the state tournament in Bakersfield and is now training and learning remotely due to the coronavirus pandemic. 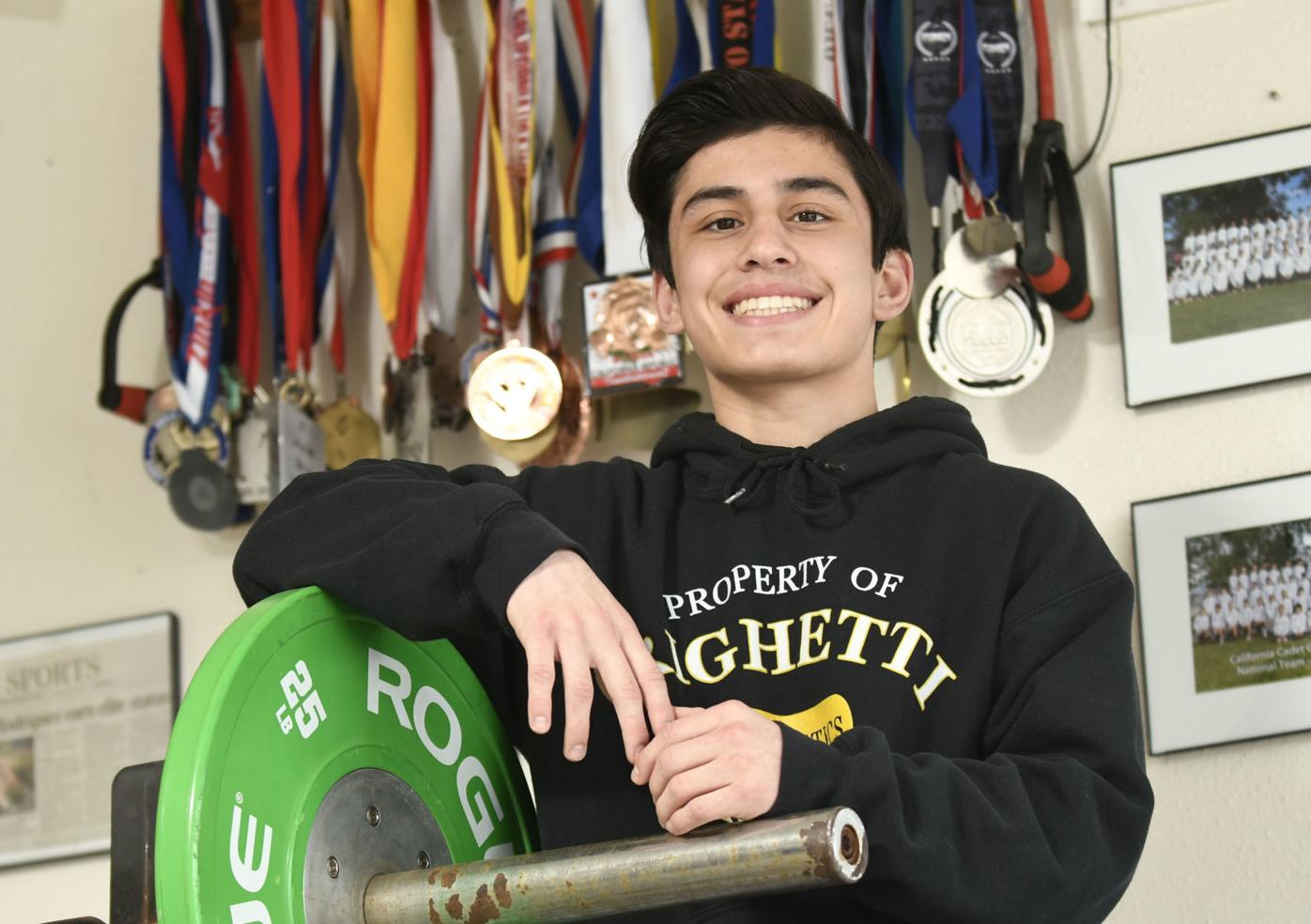 Righetti sophomore Dominic Mendez finished fourth at the state tournament in Bakersfield in 2020 and finished in fourth place at a prestigious USA Wrestling Tournament in Fargo this week.

Righetti sophomore Dominic Mendez finished fourth at the state tournament in Bakersfield and is now training and learning remotely due to the coronavirus pandemic.

Righetti sophomore Dominic Mendez finished fourth at the state tournament in Bakersfield in 2020 and finished in fourth place at a prestigious USA Wrestling Tournament in Fargo this week.

Righetti sophomore wrestler Dominic Mendez’s goal before the 2019-20 season started was to place in the top eight at the 2020 CIF State Tournament.

He did just that, finishing fourth at 108 pounds in the state tournament at Mechanics Bank Arena in Bakersfield.

“I placed fourth, so that was good,” Mendez said by phone.

The Righetti sophomore was the Mountain League champion at 108 pounds. Mendez won at the CIT meet at Morro Bay early in the year.

The Morro Bay meet regularly draws some of the top wrestlers in the state. Mendez finished seventh at 108 pounds at the Doc Buchanan Invitational in Clovis, an even more prestigious meet, later in the season.

Participation in the Doc Buchanan meet is by invitation only.

“That’s a tough meet,” said Mendez. “A lot of the top kids, from California and out of state, wrestle there.”

Mendez said, “About two weeks before the Doc Buchanan meet I started training harder because that’s when the tougher meets started.”

The hard work paid off. Mendez finished second at the CIF Central Section Masters Meet, the sectional qualifier for the state meet, then finished fourth at the state tournament.

Mendez said he made a lot of progress from his freshman season to his sophomore one, mainly in the mental area.

“I was a lot better mentally,” he said. “My freshman year, I wasn’t as confident.”

Mendez wrestles year-round. He is involved in no other sports at Righetti. During the off-season he wrestles for Marvel Wrestling Academy.

Now Mendez is doing what athletes across the nation are doing because of the distancing mandate caused by COVID-19, the coronavirus. He is distance training.

“Right now we have our Righetti High School wrestlers doing championship meetings by Zoom once a week,” Domingues said.

“We talk about them having a purpose/focus for the week.”

Domingues said, “Each week we give them a weekly challenge. This is an individual exercise in which they compete with their teammates.

“For example last week the exercise was to do as many pushups as possible from Monday to Friday. They keep track digitally with a leader board so they can see who has the most. This is an effective way of keeping our athletes engaged and competitive during this time of social distancing.”

“I’d rather be training in person with my teammates,” he said. “I have a wrestling mat in my garage but it’s not the same.”

As for virtual learning, Mendez said that only goes so far, too. Area schools closed March 16 in the wake of the onset of COVID-19, and California Governor Gavin Newsom has said since that state schools will not re-open for the rest of the academic year.

“I’d never said it before, but I’m ready to go back to school.”

Today in History: Sam Houston elected president of the Republic of Texas